While the Cerebras CS-1 is a computer, I wouldn't try running any games on it as it is built solely to be a faster way to process artificial intelligence (AI) workloads, which the creators, Cerebras, says there is no other system currently on the market faster than the Cerebras CS-1.

The Cerebras CS-1 is a 400,000 processor computer designed to speed up current AI systems

This system is currently deployed in the Argonne National Laboratory, where it has been used to accelerate the studies currently going on there some subjects they study there are how to better help and understand brain injuries and how to get a better grasp of black holes.

Andrew Feldman, Founder of Cerebras Systems stated "The CS-1 is the industry’s fastest AI computer, and because it is easy to install, quick to bring up and integrates with existing AI models in TensorFlow and PyTorch, it delivers value the day it is deployed," along with saying in the announcement of the Cerebras CS-1 "Depending on workload, the CS-1 delivers hundreds or thousands of times the performance of legacy alternatives at one-tenth the power draw and one-tenth the space per unit compute."

This processor is called the Wafer Scale Engine, or WSE (pronounced as "wise") and has a trillion transistors which do make this processor considerably bigger than any AMD or Intel processor, it measures 46,225 mm-squared, below is an image of this processor which houses the 400,000-cores next to a keyboard for scale. The WSE has 18GB of on-chip memory (SRAM) with an interconnect with the speed of (PB/s) Petabits per second. The dimensions of this processor is 215mm x 215mm, which is designed solely for AI deep learning. 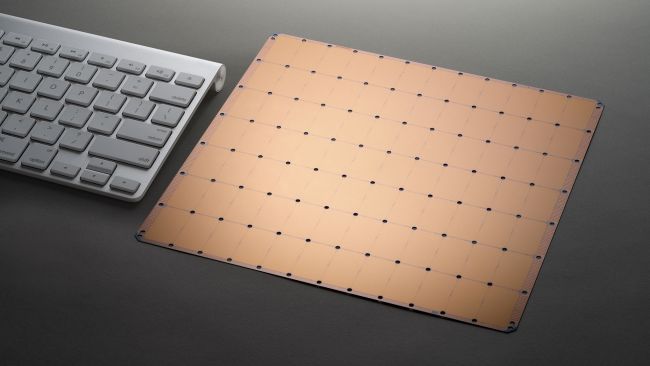 This computer takes up just a third of the space in a datacenter rack yet has the power to replace thousands of GPUs that would take up full datacenter racks by themselves. I wouldn't imagine this computer being cheap or on sale anytime soon, especially not for Black Friday or for Cyber Deals Monday.