Talking about Subverse was inevitable. When a game that is all about sex clears over £1.6 million (over $2m) on Kickstarter, it's big news. When that game is finally released into early access, it's also big news. With a starting budget that big, you would expect the game to really have something special going for it, especially when it's developed by StudioFOW, a group of people well known for their animations' quality. Released into the wilds of Steam just last week, it's hard not to be curious what the game part of this adult game is all about and if it's any good as an actual video game.

You know what, it's different. Is it good? It's too early to tell if the whole thing, when released, will be good. My time with the game so far hasn't been a wholly unenjoyable one, though, and as for the amount of time spent doing the sex, I can count the number of minutes on one hand.

That's in real life. The game? That's around two hands.

So, what exactly is Subverse? It's a mixture of bullet-hell shooter, turn-based tactics, and visual novel with a dash of RPG. Also, a whole lot of breasts, arses, tentacles, and other monstrosities. This is essentially three different games mashed into one, and it honestly works. Much of your time will be spent in (fortunately) skippable dialogue scenes.

The dialogue isn't exactly porn-movie bad. It's also not good, but if you're anything like me, you're going to get a few laughs out of it. There's something just amusing about Sandy Glitchford talking about the data capsule he left at Starcucks, but the capsule happened to contain financial information and NDA documents regarding future projects. Also, it contained certain magic tricks.

Indeed, you'll find so many characters that aren't even a wafer-thin reference to real people or something from popular culture. No amount of text at the start of the game saying the characters are fictional will create a good enough facade. Zanderson Dooper, that you have performed the Chronic Run performed in 420 parsecs, references to a Bro Bogan podcast. I could go on, but it doesn't get any better, or worse for that matter. StudioFOW is keen to state at the very start that "player discretion concerning this disgusting game is advised". 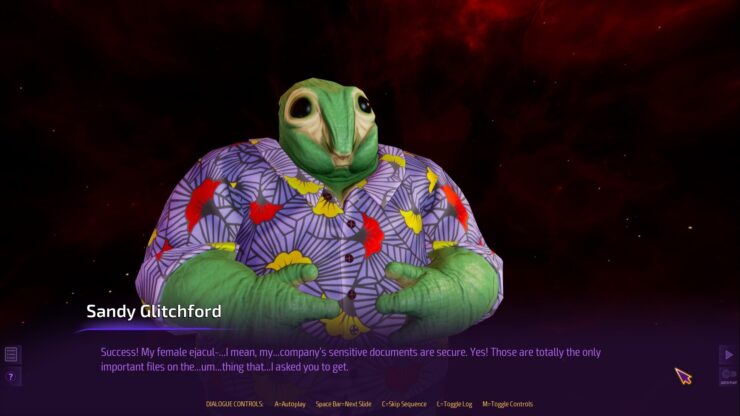 So what about the rest of Subverse? Not the sex; we'll talk about that later. I mean the actual gameplay part of this adult game. I've mentioned already it's a mixture of a bullet hell shooter and turn-based tactics, and those of you who understand video games may realise that these are two vastly different genres. For all you smart folks who have noticed this, allow me to explain.

Bullet hell shooting parts are your ship combat missions. You operate your ship and shoot other enemy ships, eventually fighting much larger ships that represent bosses. These aren't bullet hells in the same level as Ikaruga, DoDonPachi or Geometry Wars, there isn't that much going off on the screen, but it's also not too simple that it offers no challenge at all. While in this mode, you've got your regular attack, a dash move, the ability to increase your speed at the cost of being able to attack and finally, a secondary, special attack that varies depending on the woman you pick at the start of a battle to join you in the fight.

What about the turn-based tactics? These are the ground missions, and, honestly, I'm enjoying these far more than I expected to do. Again, choose one of your female love interests to take into battle. She can also be joined by three genetic monstrosities created by Lily, the super sexy scientist who joins you at the game's start. It plays surprisingly well, with every character and creature having a special attack that charges if that character is hit four times. You've also got movement ranges, attack ranges and more based on the character or creature. There are also map-based hazards.

Both modes are almost too well-thought-out, considering the subject matter. I forgot to add the hazards found in space combat, such as the asteroids. I've also not mentioned the tactical opportunities like flying in a way that lets you use a homing missile against the same enemy that fired it. I was genuinely surprised to find the game parts of Subverse to be as well designed and developed as they are, especially considering this is in very early access. 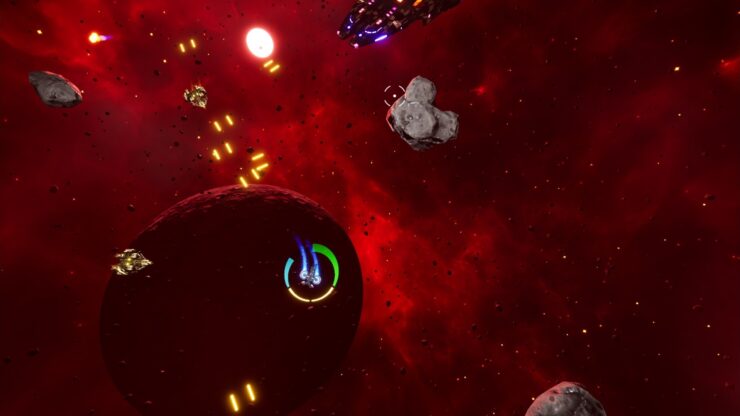 How early access? You've only got access to three females that join your crew and enjoy a bit of carnal pleasure as they have a bounce on your pogo stick. Well, they also have a bit of fun with a lot more, but I'm going to leave that to your imagination because Wccftech is a safe-for-work site, and I only have so many hours to censor things. Let's say Lily's monsters get used for more than combat. There are also tentacles, an ultra-fast mechanical toy and what look like space Orcs. These are all scenes unlocked by Pooter Points (let that name sink in) that are unlocked as characters level up.

Other rewards like credits, tek and bio are used to upgrade your ship or create new creatures for battle. You also get items as rewards which can be used as gifts in little date scenes once you unlock the bar on your ship, but for now, the actual rewards for these dates, or the payoff, doesn't seem to have been implemented. I imagine it will reward you with more pooter points (seriously!?) or something else down the line when more of the game is developed.

So yes, Subverse is very early access on Steam. Six chapters so far, but there's a lot of story going on already. More than this, the quality is pretty damn high. The writing is what it is, but it's good for what it wants to be. The gameplay is of high quality, and visually, there's literally nothing to fault the game on. Character models are of typical StudioFOW exemplary quality, with everything else in the game looking like it's had a huge amount of detail gone into it. It seems that £1.6 million, time, skill and a lot of passion can lead to the foundations of what could be a genuinely good game, never mind something good for an adult game that's designed to make your mass erect.