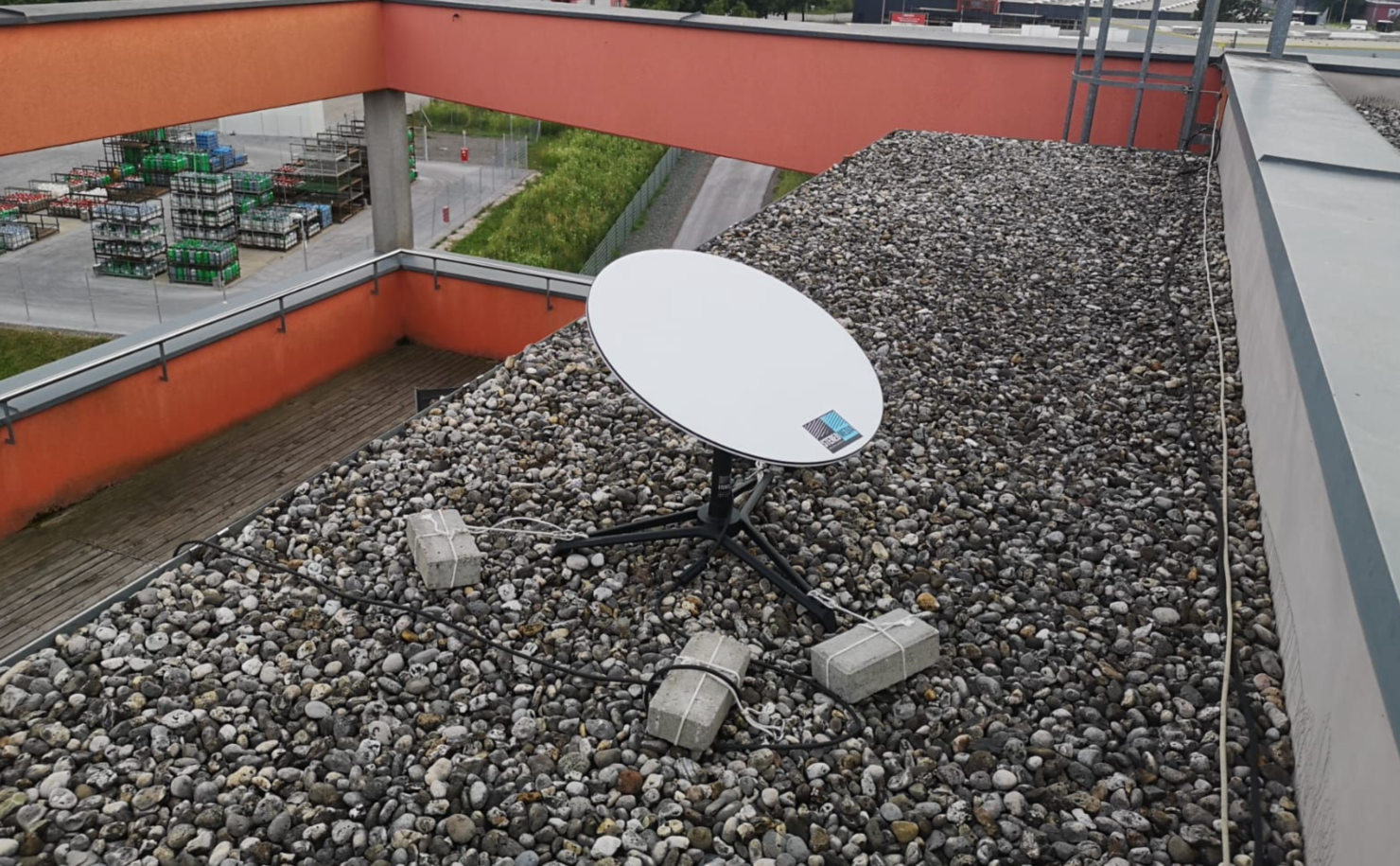 Space Exploration Technologies Corp.'s (SpaceX) Starlink satellite internet constellation was the center of a detailed study last month, conducted by the Carinthia University of Applied Sciences in Vienna. The study covers several areas of Starlink's performance, such as its download speeds, latency and the ability to stream video continuously. Its results reveal that the internet service delivers an average download speed of 170 Mbps and a top download speed of 330 Mbps. Additionally, Starlink also demonstrates latencies as high as two seconds and dipping below 30 milliseconds reveals Carinthia's ROADMAP 5G research group, which aims to study emerging technologies in the era of fifth-generation (5G) cellular internet connectivity.

For their study, the researchers connected a notebook to a Starlink router through a Gigabit-capable switch. They then ran their tests for the internet service's download and upload speeds, latencies, downtime, video streaming, dish power consumption and the time the user terminal spends connected to the satellites.

These revealed various interesting results, the first of which covers the download speeds for SpaceX's internet service. Carinthia's tests show that in Villach, Vienna, where the university is based, Starlink downloaded data at an average speed of 170 Mbps, with a median of 177 Mbps and a peak download speed of 330 Mbps. In statistics, the median of a data set describes the middle value, and it is often used to remove the effect that extreme values have on the average.

Additionally, the researchers also discovered that for upload speeds, Starlink was able to send data at an average of 17 Mbps, a maximum of 59 Mbps and a median of 17.8 Mbps. At this point, it is relevant to note that while the text of the research paper lists averages and mean download speeds, a deeper inspection of the Python code used by the researchers reveals that the values described by mean actually refer to the median. 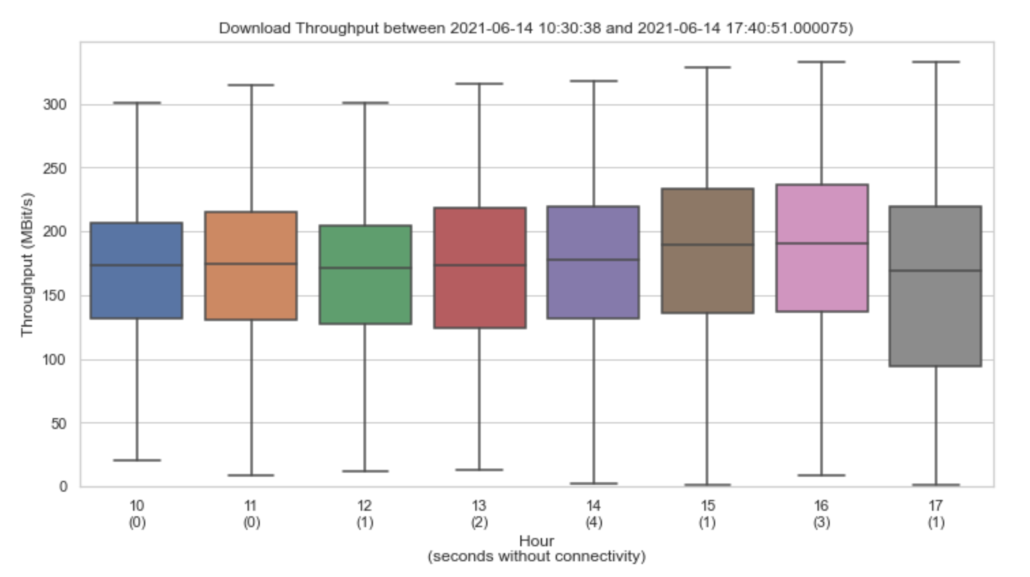 A box plot of Starlink's download speeds measured over seven hours by the researchers. Image: Starlink Analysis/ROADMAP-5G at the Carinthia University of Applied Sciences (CUAS)

Moving forward from download speeds, the researchers also tested Starlink's short and long-term latencies. Latency is described as the time that it takes for an information packet to travel from and back to an internet user, it is measured in a time unit and a lower value signifies superior network performance.

At this front, the data gathered by the researchers reveals that over a period of 24 hours, Starlink's latency remained below 70 milliseconds, with a latency of 45 milliseconds achievable 77% of the time. Improving latency is a key service goal, according to SpaceX chief Mr. Elon Musk, who aims to bring it below 20 milliseconds for enabling competitive gaming on the internet service.

The researchers' findings also revealed an interesting tidbit about Starlink's latency, with their data showing that changes, either positive or negative took place at 15-second intervals. Using this fact, the researchers also proved that multiple network outages also took place at time intervals, which are multiple of 15 seconds. 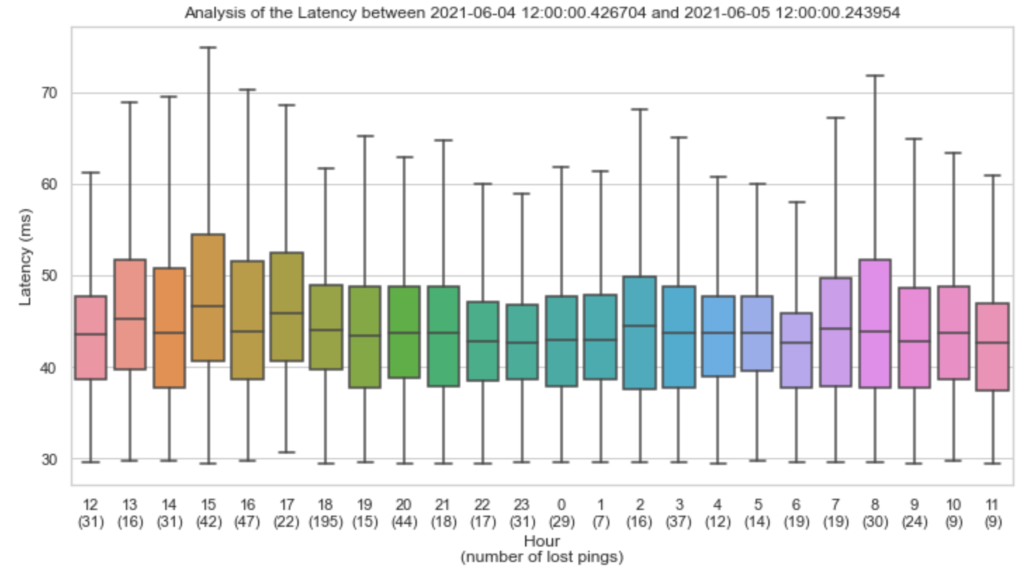 A chart showing Starlink's latencies measured over a period of 24 hours. Image: Starlink Analysis/ROADMAP-5G at the Carinthia University of Applied Sciences (CUAS)

For video streaming, the study reveals that, on average, Starlink has a buffer health of 40 seconds. Buffer health refers to the amount of video a browser loads in advance as it anticipates a network outage or slowdown. So for Starlink, 40-second buffer health means that the video player stored 40 seconds worth of video on the device to ensure that if the connection did drop, it could be regained before the user experienced inconvenience. The video being run was an 8K video, and at times, the buffer health also touched a peak value of 70 seconds.

While studying outages, the researchers discovered that:

They then extended their observations about outages with the number of satellites visible to the user terminal. Surprisingly, this revealed that the number of outages remained roughly the same regardless of the satellites available within the visibility window.

Specifically, the data revealed that: 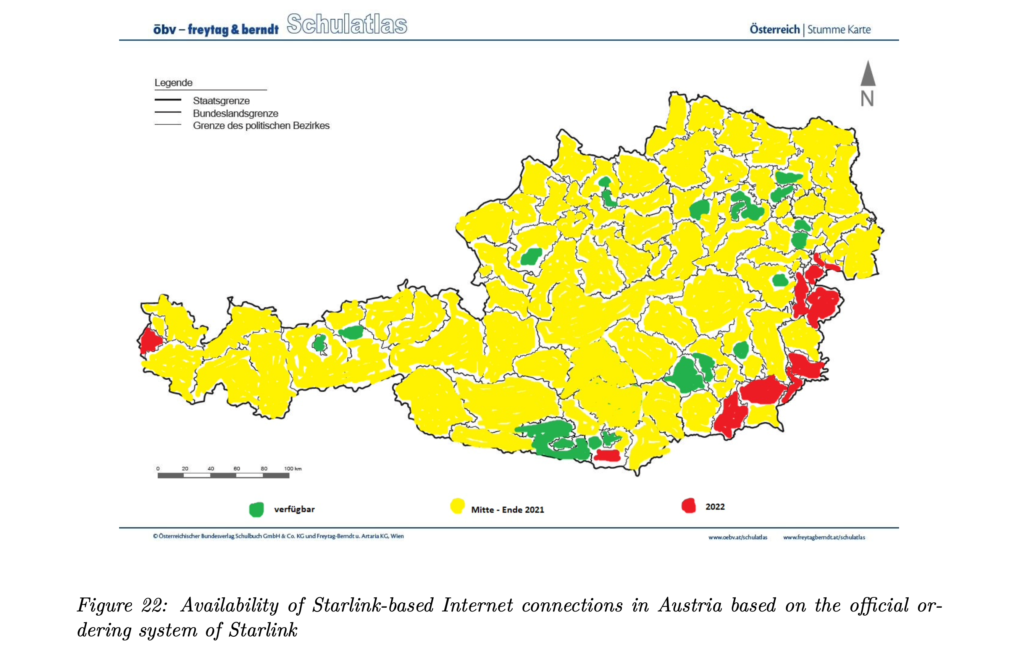 Starlink coverage map for Austria reveals that most of the country should be able to order the service by next year. However, the researcher demonstrated that the internet service worked even in an area where availability is scheduled for 2022. Image: Starlink Analysis/ROADMAP-5G at the Carinthia University of Applied Sciences (CUAS)

Finally, the researchers could also connect to the Internet with Starlink in areas outside of the service's coverage map. This included coverage in one area where availability is scheduled for 2022 and others where it is possible to order a user terminal now.

With only a limited number of Starlink satellites being deployed so far, the results of the study, which was conducted last month, are far from being set in stone. SpaceX has several plans for its satellites, including second-generation spacecraft that are capable of using lasers for communicating with each other, as it plans to aggressively build its constellation of thousands of satellites within the next few years.