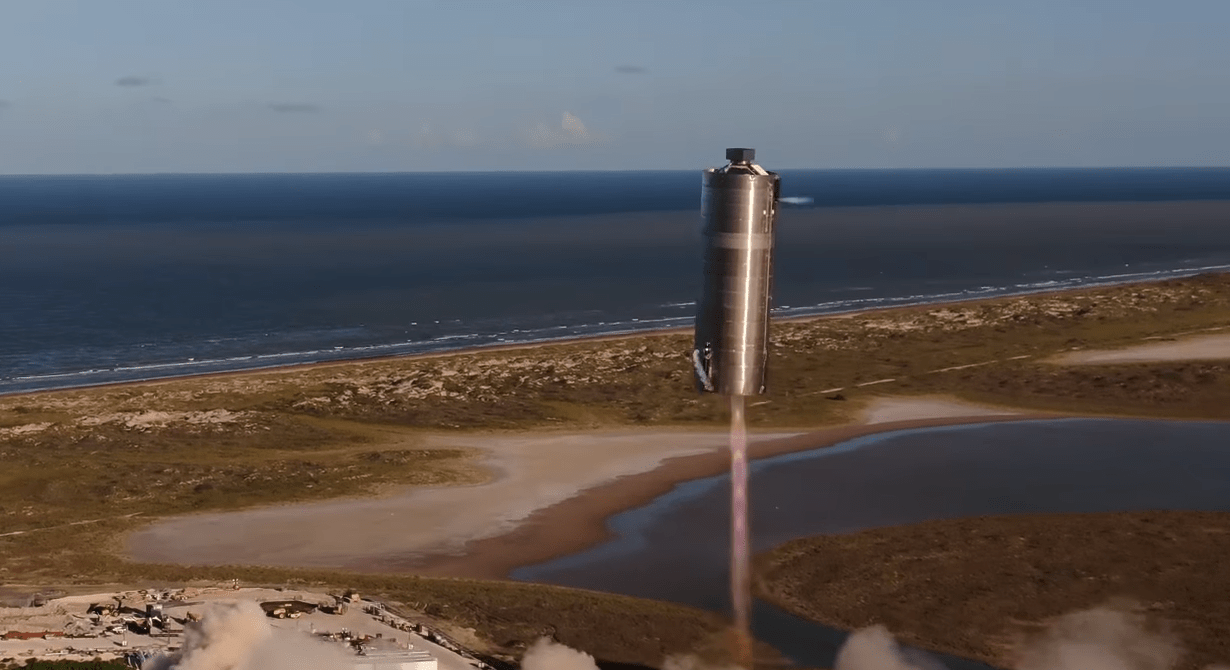 SpaceX Starship's SN5 prototype during a 150 meter hop on the 4th of August, 2020 in the Boca Chica skies. Emanating from the Raptor engine powering the hop are the 'Mach Diamonds' of thrust that are formed due to radial flow inhomogeneity in the nozzles. Image: SpaceX

Following a successful fundraising round earlier this month, one that was its largest to date, SpaceX has started to reveal more details about its plans for the Starship launch vehicle platform. As opposed to the company's current Falcon boosters and Dragon spacecraft, Starship is SpaceX's platform that is designed for deep space exploration - particularly for missions that the company hopes will let humans establish a permanent presence on Mars.

On this front, SpaceX's founder, chief engineer and chief executive officer Mr. Elon Musk has provided more details about Starship's Super Heavy Booster. This booster is one of two parts that make up the platform, with the second stage capsule that SpaceX intends for supporting crewed and uncrewed missions also being dubbed as Starship.

The details were revealed by Mr. Musk through a phone call on the first day of the Humans to Mars 2020 virtual summit yesterday. At the event, the executive provided more details about his company's plans of constructing Starship's first stage booster, how it will ensure that the system is ready for manned missions, the progress of the platform's Raptor staged-combustion methane-fuelled rocket engine and design goals for the upper stage Starship spacecraft.

Following up with more details about the Super Heavy booster, Mr. Musk revealed at the summit that SpaceX will begin constructing the booster's first protoype this week. This follows an earlier reveal made by him at the end of last week when he expressed hope that his company will be able to conduct the Super Heavy's first prototype hop in October. The prototype hop will use two Raptor engines, the executive stated on Friday with the booster targetted to achieve a total thrust of 16.5 million pounds.

Earlier this month, Musk also revealed an important development related to SpaceX's Raptor engine. The engine is the first of its kind in the manner through which it mixes propellant for combustion. Rocket engines are generally of two types that are differentiated on the basis of whether some of the propellant is used for driving the engine's pumps to feed fuel into its combustion chamber. Engines that use propellants for driving the pumps are referred to as 'Open Cycle' engines and they are less efficient than their counterparts that use all of the fuel for combustion to generate thrust instead.

The latter are referred to as full-flow staged combustion engines and the Raptor is the first of their kind to take flight - which it did on the Starhopper test vehicle last year. Musk's revelation earlier this month stated that the engine had also achieved the highest-ever combustion chamber propellant pressure for a rocket engine of 330 Bar and yesterday's reveal adds more details to this.

Musk also speculated at the possibility that the Raptor might be able to achieve a thrust-to-weight ratio of 200, surpassing what SpaceX's Merlin engines are currently capable of. Oxygen-to-fuel ratio for the Raptor currently sits at 78:22 revealed the executive as he discussed the differences in rocket engine nozzles for use in vacuum and on Earth. 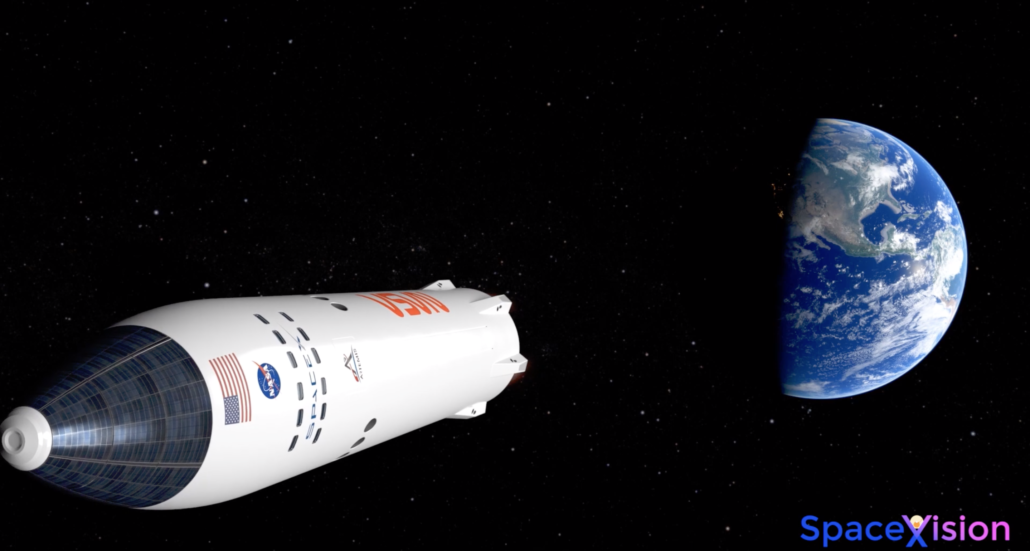 A render of the SpaceX Starship's lunar variant. SpaceX Vision/YouTube

Super Heavy Booster To Use 28 Engines, With 20 Dedicated Purely For Thrust

Providing more details about Super Heavy, Musk also reiterated that manufacturing production systems to build the Starship launch system is the hardest part of the entire project. He also brought down the number of engines that will be used on the Super Heavy booster to 28 from the 31 that SpaceX initially planned to use. Additionally, delving into more details, the executive also stated that 20 of the 28 engines on the boosters will not be able to steer the rocket and will be used purely for generating thrust.

Commenting on Starship's commitment to also serve as a potential lunar landing system for NASA astronauts, Musk also stated that building life support systems for the lunar mission systems will be relatively easier for the lunar variant, but they will get more complicated for the Mars variant of the spacecraft.

"We know how to make a complex life support system that can deal with a wide range of environments. You know, changing atmospheric pressure, changing the Oxygen/Nitrogen percentage in the air. We've made spacesuits capable of taking total vacuum depressurization and in terms of filtering out CO2 and other stuff that people breathe," stated Musk. "For a longer mission, like Mars, you want to have a more renewable system than what we have on Crew Dragon, you'd want to recycle things, you know, recycle water a lot more, Oxygen a lot more. But, yeah going to the Moon, no problem."

Finally, prior to making first crewed flights, Starship's design will be validated by launching dozens of satellites stated the executive. SpaceX intends for Starship to replace its existing Falcon 9 and Falcon Heavy rockets and when it does, the launch system will also replace them for carrying payloads including satellites to orbit.

Update, September 1, 08:34 ET: Mr. Musk continued to provide more details for the Super Heavy's engines on the microblogging platform Twitter. In a post made on 03:32 ET the executive stated that the outer ring of 20 Raptors will not feature thrust vector control (TVC) systems, and this function will be limited to the inner eight engines of the booster. TVC is often carried out via actuators on rocket engines, and the Merlin 1D engines that power SpaceX's Falcon lineup use kerosene from the turbopump to control the actuators, which removes the chance of failure from using separate hydraulic fluid.

SpaceX will manipulate thrust on the outer engines and combine this with the inner eight Raptors with TVC to steer the vehicle. The executive also highlighted the reason behind his company's decision to bring down the total number of Raptors for the Super Heavy. Over time, Musk believes that the outer ring of 20 boosters will be able to provide roughly 300 tons of thrust and the inner ring will provide 210 tons, and therefore allow the vehicle to generate approximately 7500 tons of thrust at lift-off.

Since SpaceX intends for the Starship launch system to weight roughly 5000 tons at lift-off, Musk believes this will enable the system to achieve a thrust-to-weight ratio of 1.5, with high-power Raptor variants being capable of achieving the highest T/W ratio in history.