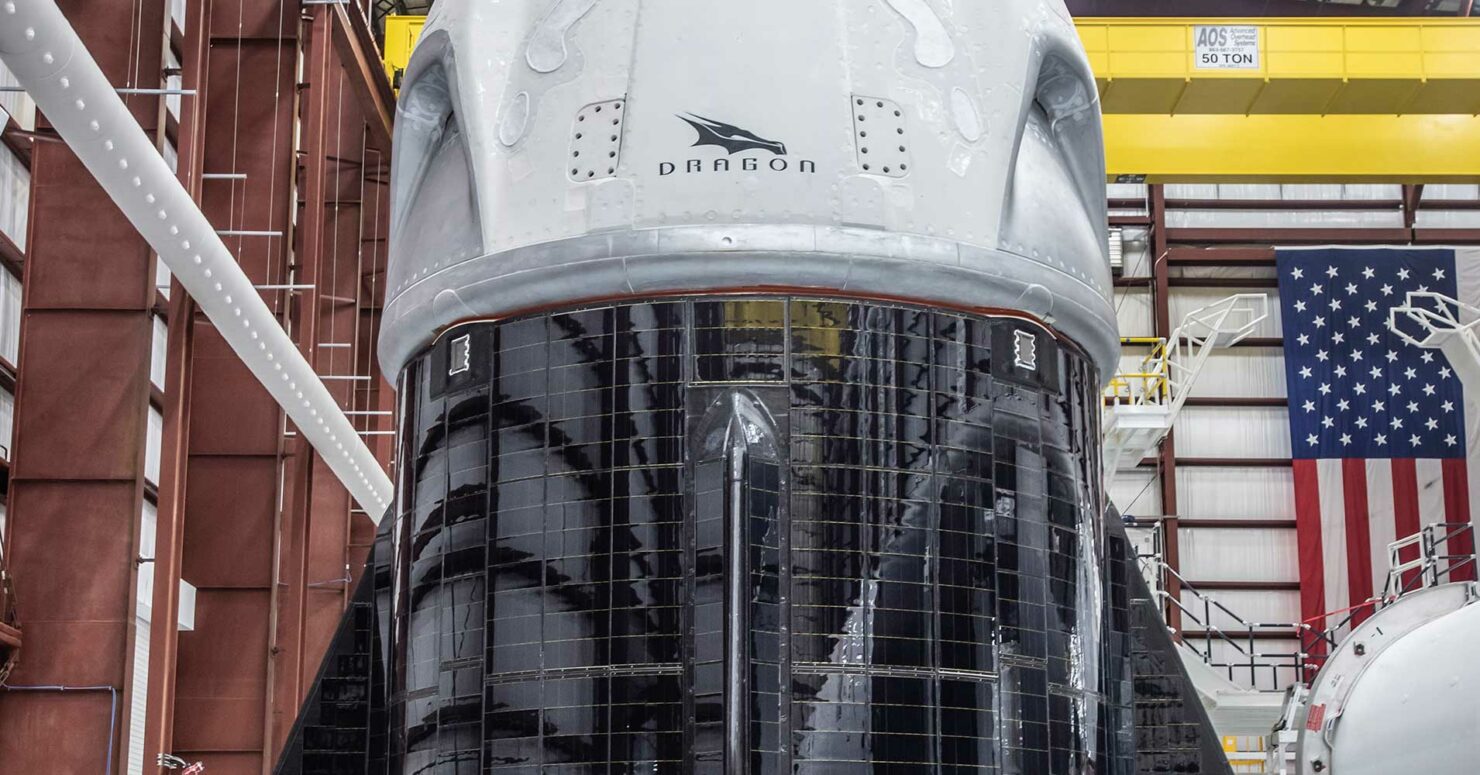 View of the SpaceX Dragon 2 vehicle in the company's processing hangar at the Launchpad 39A in Cape Canaveral Air Force Station, Florida in 2018. The Crew Dragon 2 vehicle's solar panel arrangement is different from the cargo Dragon's panel arrangement, with the latter's 'winged' deployment having a higher risk of failure unacceptable for crewed missions. (Image Credit: SpaceX)

Earlier this year astronautic launch services provider and equipment manufacturer Space Exploration Technologies Corp. (SpaceX) made history when it launched astronauts from American soil to the International Space Station (ISS) in its Dragon 2 spacecraft atop a Falcon 9 Block 5 liquid rocket booster. The launch was a part of NASA Dragon DM-2 mission which is the final step in the space agency's testing and evaluation of SpaceX's vehicle for crewed commercial missions to the ISS under its Commercial Crew Program (CCP).

Since the Dragon 2 docked with the space station in May, astronauts on board have been busy evaluating the spacecraft various performance parameters. These cover the Dragon 2's power generation capabilities, its software and life support system performance and as NASA revealed recently, the vehicle's habitability.

For habitability, NASA has now confirmed that the Dragon 2 has passed all of the space agency's requirements in a critical step that moves the spacecraft one step forward towards officially ferrying astronauts to the ISS in missions in which NASA is the contractor as opposed to the service provider.

Onboard the Dragon 2 were NASA astronauts Robert Behnken and Douglas Hurley and they joined Commander Chris Cassidy of Expedition 63 and Russian cosmonauts Anatoly Ivanishin and Ivan Vagner. All personnel have been busy in performing spacewalks to replace the station's aging batteries and the Crew Dragon 2's habitability evaluation was carried out by Behnken, Hurley, Cassidy and Ivanishin.

Part of the testing covered evaluating the spacecraft's hatch by opening and closing it, the ability of the vehicle to manage onboard waste and its ability to store cargo transported from the ISS. Given that American astronauts will be joined by their international counterparts in the crewed missions, astronauts Hurley and Behnken were joined by cosmonaut Ivanishin and Commander Cassidy to evaluate the Dragon 2's sleeping configuration's performance with a crew of four onboard. The Dragon 2 is capable of transporting a crew of seven members to the ISS, but this configuration is yet to be tested.

Even as the Dragon 2 spacecraft clears NASA's habitability tests, Bob, Doug and other crew onboard the ISS still have other tests to run on the vehicle. As confirmed by NASA administrator Jim Bridenstine on social media last week, the space agency intends to bring back the Dragon 2 vehicle currently docked with the ISS to Earth on August 2nd.

The spacecraft's undocking with the ISS, its performance of the required maneuvers for insertion into Earth's atmosphere, its ability to sustain Behnken and Hurley during their travel back to Earth, its resilience during the strenuous condition of reentry and its ability to allow the astronauts to egress post-launch will all form critical components of the Dragon 2's remaining evaluation criteria.

Once the tests are complete, commercial missions on a different Dragon 2 vehicle will officially commence and with them mark the start of NASA's plans of growing the scope of the Low Earth Orbit (LEO) economy. The Falcon 9 booster that will propel the Dragon 2 Crew-1 mission the ISS is already under testing in Florida, with the spacecraft for the mission set to arrive soon.