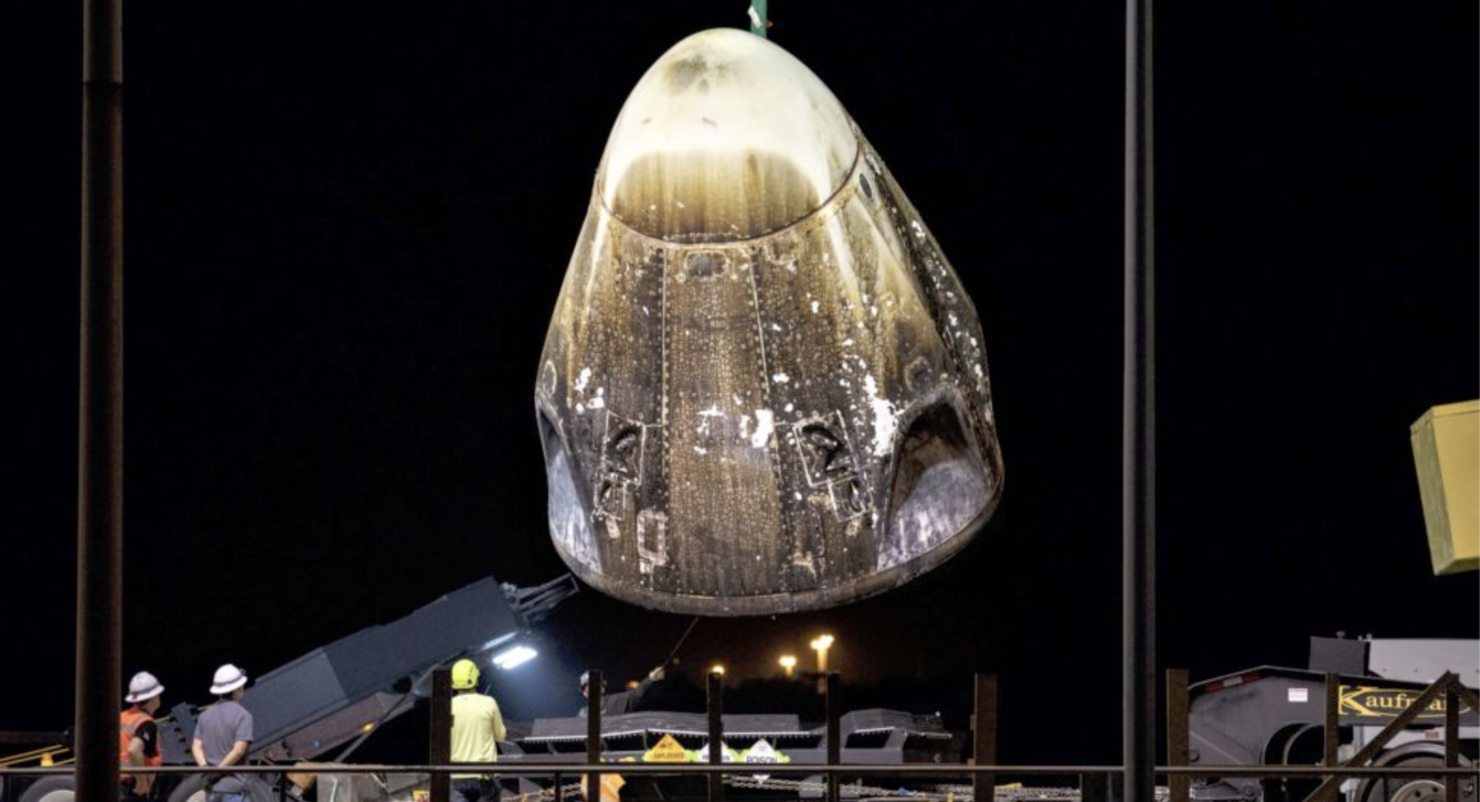 Officials from the National Aeronautics and Space Administration (NASA) and SpaceX conducted the first series of press briefings today. These mark the beginning of the first official flights to the International Space Station (ISS) from American soil. Present at the first briefing was NASA Administration Jim Bridenstine, Associate Administrator of the Human Exploration and Operations Mission Directorate Kathy Leuders and SpaceX's Vice President Build and Flight Reliability Hans-Jorg Koenigsmann.

NASA's first official crewed flight to the ISS, Crew-1 will take to the skies on October 31st. Given that it will use SpaceX's Dragon 2 spacecraft that was tested through the Demo-2 mission earlier this year, the briefing revealed important details about Dragon's performance. In particular, the officials elaborated on two minor problems that the spacecraft exhibited and their fixes for them.

The Demo-2 mission was piloted by astronauts Robert Behnken and Douglas Hurley. They were charged with evaluating the vehicle's performance to and from the ISS. Following splashdown off the coast of Pensacola, Florida in August. Following this, NASA and SpaceX worked to evaluate any anomalies that the vehicle might have demonstrated during the mission.

The two problems, which both Ms. Leuders and Mr. Koenigsmann described as relatively minor in today's briefing related to the vehicle's heat shield and barometric measurement system. Dragon's heat shield ensures that the vehicle can sustain high temperatures during re-entry into the Earth's atmosphere. The vehicle's barometric measurement system determines when its drogue parachutes deploy at splashdown.

SpaceX's VP led his remarks by highlighting the two problematic areas and his company's adjustments for improvement. During the conference, he was pressed multiple times for more details. His most elaborate answer came in response to a query from Chris Davenport of The Washington Post who asked the executive to elaborate on the heatshield problems.

First of all this was a small area in the heat shield, particularly the area around what we call the tension ties which hold the trunk and the Dragon spacecraft together. In this particular area we saw a flow phenomenon that we didn’t expect, and we saw erosion to be deeper than we anticipated. However I mean this heat shield is massive and over the entire acreage there was very little erosion. Erosion in the particular area was a little bit deeper. But nothing to be concerned, at all times the astronauts were safe and the vehicle was working perfectly. This is something we just found in the inspection and looked at it and decided okay we should probably you know reinforce the heat shield in this particular area. It’s actually four areas around the tension ties; a very small area compared to the overall average of the heat shield.

I think Kathy’s comment [referring to a remark by Leuders on how the vehicle's 'screens' were upgraded] regarding the screen refers to the filter that filters the air going into the barometric pressure sensor. That particular filter has been opened up a little bit so that it’s less constrained, and that has the effect that we measure the barometric pressure more accurately when we come down and deploy the [drogue] parachute right on time. That is something that was also not a particular problem the last time, you know going forward it is a safety improvement and will make sure that we will launch astronauts and land them of course safely in the upcoming years.

The SpaceX executive was then further pressed for details around the company's improvements to the heat shield. In response to a question from Douglas Messier from Parabolic Arc, he stated that the problems appeared to stem from displaced airflow from the tension ties.

Specifically, according to Mr. Koenigsmann:

The best way I can explain without slides and lots of data is that these tension ties that connect the trunk and the spacecraft they cause some disturbance in the airflow around them, and then it digs a deeper hole into the heat shield after that because there’s probably a vortex or something like that. I don’t know the exact technical details on this one but the fact is that one particular tile has basically more erosion than the others. It tunnels basically into the tile. Like I said earlier, this was always a safe situation. It never got to [the] structure. The heat shield was working great. So it’s something that is relatively easy to fix by putting a more resistant or erosion resistant material in that particular place.

He went on to state in response to another question that SpaceX had not experienced the problem with the Demo-1 mission. Additionally, Koenigsmann also speculated that perhaps the erosion stemmed from the Demo-2 mission's increased weight and different trajectory.

Finally, Ms. Leuders expressed her agency's confidence in the upgrades that SpaceX performed to replace the weaker tiles and stated that NASA was "very satisfied" with the design.

NASA and SpaceX's Crew-1 mission is undergoing certifications before its planned liftoff next month. The Dragon 2 vehicle for this mission will complete Human Rating Certification by early October stated Ms. Leuders, with its Flight Readiness Review expected to take place a week before launch.