Shadow of the Tomb Raider Hands-On Preview – The Apocalypse Is Coming! 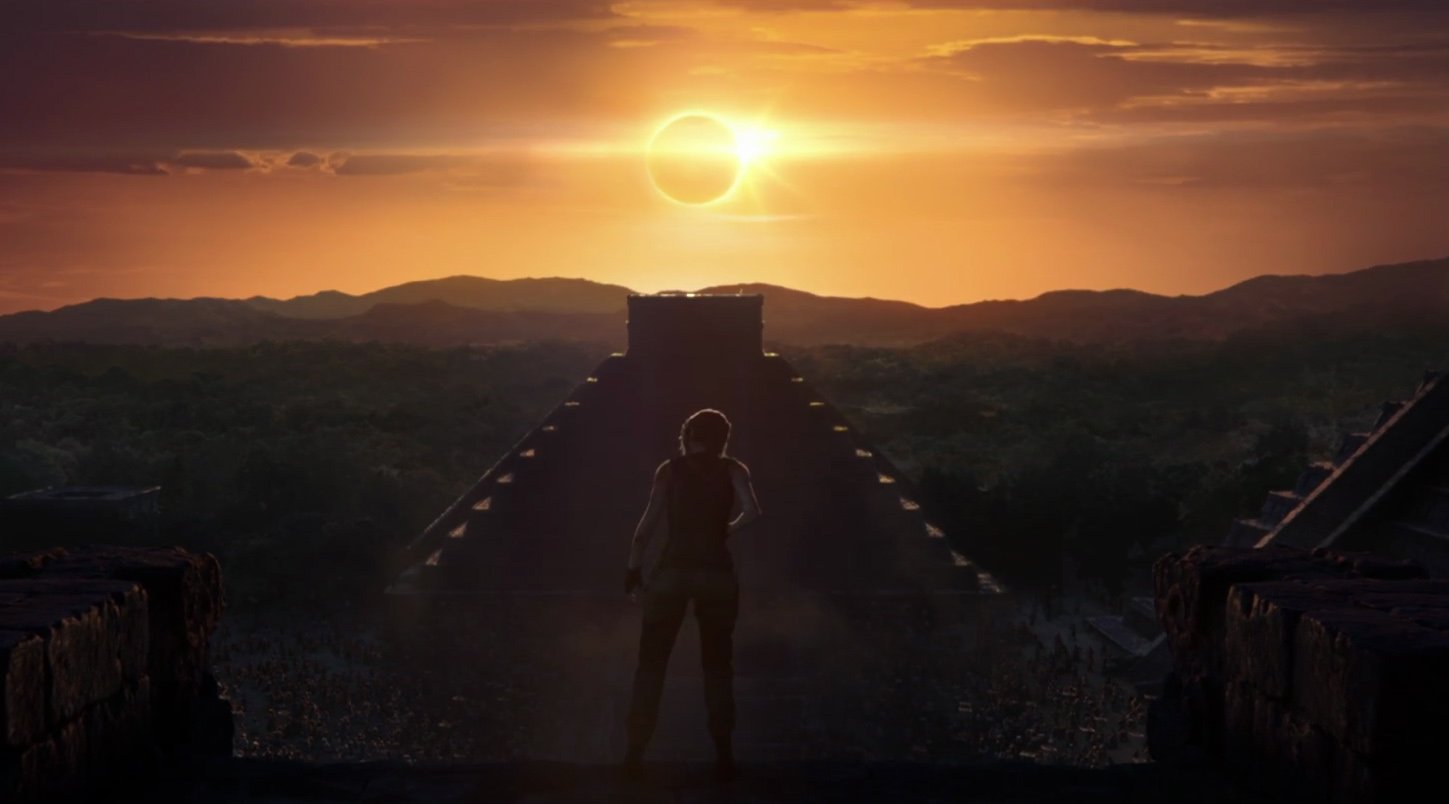 The internet has known about Shadow of the Tomb Raider long before Square Enix intended, thanks to a mysterious Eidos Montreal using their laptop on the subway. Despite this accidental sneak peek at the game’s title, there hasn’t been much information revealed about this game, at least there wasn’t until today. Shadow of the Tomb Raider was officially unveiled yesterday at an event in London which we were fortunate enough to attend.

Those of you that have watched any of the Tomb Raider films will be happy to know that this rebooted series is completely separate from the games. Square Enix rebooted the Tomb Raider series back in 2013, rebooting the origin story of Lara Croft. Developed by Crystal Dynamics, players journeyed with Lara as she set out on her first expedition to find the lost kingdom of Yamatai. Two years later, the developers followed up with Rise of the Tomb Raider, introducing the infamous Trinity organization, an ancient group that wants to control the world. Shadow of the Tomb Raider is the final installment of Lara’s origin story, which will almost certainly reveal more details about Trinity.

This preview will run through the forty-five-minute long demo. If you are trying your best to avoid spoilers before the game launches in September then you should turn away right now. Shadow of the Tomb Raider begins in Cozumel, Mexico, with Lara discussing future plans with Jonah (yes, the same Jonah from the two previous games). Jonah seems concerned about the injuries Lara has suffered from a previous adventure, but she seems completely unphased by any potential damage to her body. Lara has come to the conclusion that Trinity has misinterpreted ancient texts. She believes whatever mysterious artifact the organization is after is actually in Peru, not Mexico. As the pair decide to track who they believe to be an employee of Trinity, Lara puts on a Día de Muertos mask to blend in with the locals during a party.

The game begins with a short eavesdropping section as you follow Dominguez, a man suspected to be the leader of Trinity. Dominguez fears Lara may be in the area, ordering his men to be on the lookout for a woman matching her description. In order to avoid any chance of being detected, Lara distances herself from the area with the hopes of finding where Trinity’s base is located. It’s at this point that Lara removes her disguise and equips her signature bow and begins searching for a different way around the island. Shadow of the Tomb Raider also reintroduces the climbing axe, this time sporting one in each hand. As this is mostly the beginning section of the game, tutorial messages appeared on the environment as Lara scaled across the rocky surface. The axes allow Lara to both swing across platforms and rappel down to safe areas.

Lara finds a tomb that appears to lack any platforms, forcing her to go underwater in order to find an exit. As expected, swimming around isn’t the fastest way to maneuver, and on top of this, you have to find the time to avoid eels, rocks and of course search for pockets of air to breathe. This section of the game doesn’t take up much time, and not long after Lara is contacted by Jonah to find out how she is doing. The new environment is incredibly dangerous, featuring numerous corpses littered across the area. This is where Lara’s development as a hardened tomb raider continues to show, as she doesn’t even acknowledge the fact that several people have died trying to navigate their way through this same space.

As I mentioned before, this tomb is extremely dangerous, to the point where it looks as though it has been made purely to kill anyone who enters it. You’ll need to watch out for a number of spiked traps that will instantly kill Lara if she doesn’t dodge in time. As in the previous games, players should expect to perform a number of quick time events (QTEs) at any given point. About to jump towards a climbable rocky surface? Be prepared to stabilize yourself with a QTE. The same goes for any random spikes in the walls, make sure you have your thumb ready to hammer that scramble/dodge button.

After climbing on a number of unstable objects, finally, a puzzle came along to stop me in my tracks. This short puzzle sequence took me a little longer than I’d like to admit, especially when you consider how straightforward it actually is. You have to pull down a cart and place it on an object that you can turn. Doing this allows you to turn the cart so you can pull it up a slight incline. The extra momentum on the cart can now smash through a barrier, granting you access to the next area.

It’s here that Lara discovers that Trinity is after the key of Chak Chel. This key belongs to a powerful ancient Maya God of creation and destruction, and as you can imagine nothing good can come of this. Lara grabs the key (which is in the shape of a dagger) and stumbles upon some Trinity members. These henchmen have been told to initiate Project Blackout, in other words, kill all local workers. Now we are able to play the combat sections of the game, beginning with a stealth sequence. Survival instincts (activated by pressing in the right stick) displays the jungle surroundings as cover, allowing you to weave in and out of sight. Using the bow, Lara is able to take down enemies with ease while saving some of the local architects from an almost certain death.

I’m not sure if this sequence happens all the time, but my stealth skills aren’t the best so, uhh, I was spotted not long after killing a few people. At this point, Lara has pulled out a gun as that seemed more suitable for the job. Thankfully, all of the enemies were located right next to giant red barrels which made their demise all the more enjoyable. Dominguez tracks Lara down, snatching the dagger from her. He asks her to hand over the Ik Chel (a silver box) that pairs with the dagger, but soon realizes she does not have it. Unexpectedly, Dominguez allows Lara to live, stating that she has caused the apocalypse to occur. Trinity plans to recreate the world using the dagger and silver box, a world free from sin and weakness.

By taking the key of Chak Chel from the tomb, Lara began the death of the sun, causing the apocalypse. Dominguez states there will be tsunamis, volcanic eruptions and various other natural disasters thanks to Lara’s mistake. As Trinity set off to leave, the tsunami begins, destroying everything in its path. All you can do is avoid bumping into wrecked houses as Lara wades through the water in hopes of making her way to higher ground. Traveling through the water displays the number of lives the tsunami has already taken, showing large amounts of dead bodies along the way to safety. Before Lara can finally take a moment to digest things, she is unable to stop herself from watching a young boy cry for help before falling into the rushing water. Jonah reassures Lara that this destruction was not necessarily caused by her actions and that the pair should be focusing on the lives that can be saved right now. The final scene ends on Lara watching the town as it is ravaged by the tsunami.

Performance-wise, you can expect roughly the same experience as in Rise of the Tomb Raider. This game was running on an Xbox One with 4K & HDR capable TVs. Shadow of the Tomb Raider looks stunning, featuring detailed environments, a good amount of motion blur and a cinematic frame rate. Those hoping for a 60FPS or above experience will have to wait for the PC version as the Xbox One X build was capped at a locked 30FPS. That being said, there is a chance the game could feature a performance mode featuring an unlocked frame rate, though I could not find any option for this in this build of the game. I must say I struggled with input delay during this demo, though it’s unlikely this was due to the game and more likely a result of an uncalibrated TV.

The final chapter of Lara Croft’s origin story looks to be heading towards an explosive finale. With Lara beginning to understand just how intelligent and powerful she has become over the years, she's going to need every advantage she can get with the impending doom edging closer towards her. We know there are numerous natural disasters to face as well as several deadly tombs to explore, this may be the most exciting chapter of the Tomb Raider series so far. There isn't that much time to wait until the game launches on September 14th for PC, Xbox One and PlayStation 4.