While we wait for NVIDIA's GeForce GTX 950 graphics card that launches tomorrow, a new review of the Radeon R9 370X has been posted by ZOL that is a new entrant in the sub-$200 market from AMD. Silently launching in the Chinese market space, the card is soon going to launch globally but so far, the launch date remains a mystery and the card itself is surprisingly mysterious as this review shows. 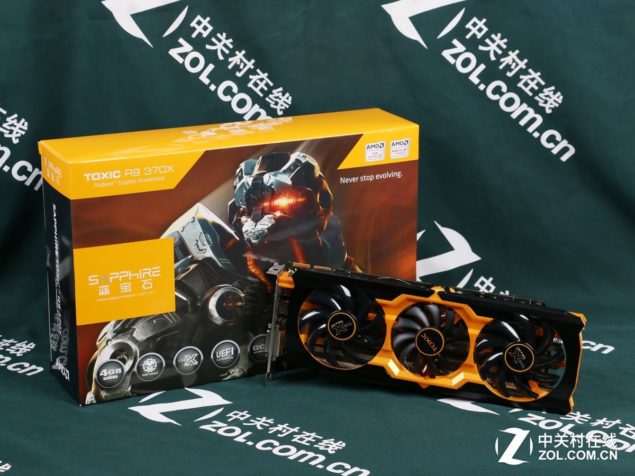 Now there wouldn't be anything surprising about the Radeon R9 370X at first since we all have seen the performance of this card a few weeks back. The previous model we saw was from Powercolor, using their flagship Devil cooler on a custom PCB design and clocking it as high as 1180 MHz. The Powercolor Devil R9 370X is going to be the fastest clocked model but the Sapphire Radeon R9 370X Toxic, that is clocked at 1150 MHz has some surprises up its sleeves which will be detailed in this article. For starters, the Sapphire Radeon R9 370X Toxic model confirms that major AMD AIBs have already worked upon their Trinidad XT based cards so the only reason for not launching them officially could be NDA from AMD.

The specifications of the Sapphire Radeon R9 370X  Toxic are pretty straight forward and they will remind you of the Radeon R9 270X and HD 7870. The Trinidad XT GPU core features 1280 stream processors, 80 TMUs and 32 ROPs. Since the GPU is the same design as Pitcairn XT, we are looking at a 212mm2 die that houses 2.8 Billion transistors. The Radeon R7 370X Toxic graphics card comes with a clock speed of 1150 MHz and a memory clock of 1500 MHz (6.0 GHz QDR) which pumps out 192.0 GB/s bandwidth. The Radeon R9 370X is going to feature up to 4 GB of memory that will run across a 256-bit bus interface. The Devil R9 370X on the other hand featured just 2 GB of memory clocked at 1400 MHz and pumped out 179.2 GB/s bandwidth. The Sapphire card can be seen to feature a better factory overclocked design even if the core clock is 30 MHz slow and can be achieved simply by overclocking the card a little more. 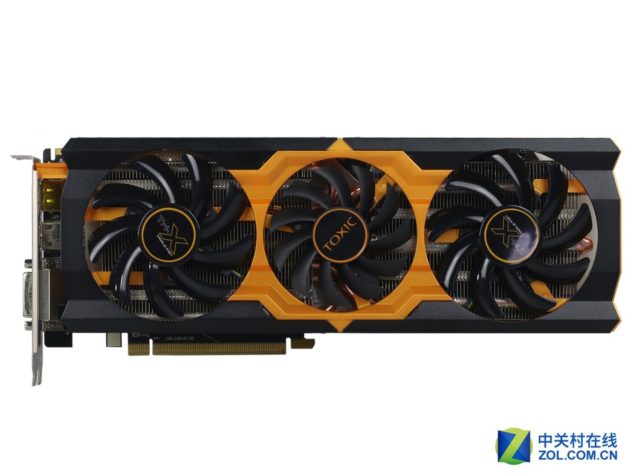 The Sapphire Radeon R9 370X Toxic comes with a nice triple fan Toxic cooler with a huge aluminum fin based heatsink that incorporates several heatpipes to cool the graphics core, memory and the power circuitry. The PCB of the card is a 6+2 phase design and the card collects power through dual 6-Pin connectors. Seen in the benchmarks below, you can note that the cooler does a good job keeping the card steady at 61C on full load with Furmark test while the power consumption is down to 220W compared to 280W (full system power) on the Radeon R9 270X showcasing the power management changes AMD made on the Radeon R9 300 graphics cards.

Now I used the word mystery at the beginning of this article. The mysterious thing about the card is that it features dual CrossfireX goldfingers. The Radeon R9 370X isn't based on a new graphics core but a revised version of the existing Pitcairn XT core that was featured on the Radeon R9 270X and the Radeon HD 7870. These two cards featured just one CrossfireX finger so it could be possible that AMD allowed Sapphire to add this to their board design because the Powercolor Devil R9 370X that also features the same core comes with single CrossFireX connector too. I don't know how many people are going to CrossFire more than two of these cards but it seems like at $179 US ($189 for the Toxic model), two of these cards if Crossfire makes more sense than 3 or 4 since that enters the R9 Fury and Fury X pricing. Single graphics cards perform much better than 3 or 4 graphics cards running in parallel with poor multi-GPU scaling. Nevertheless, you can see the benchmarks below which show a good uplift over the Radeon R9 270X.