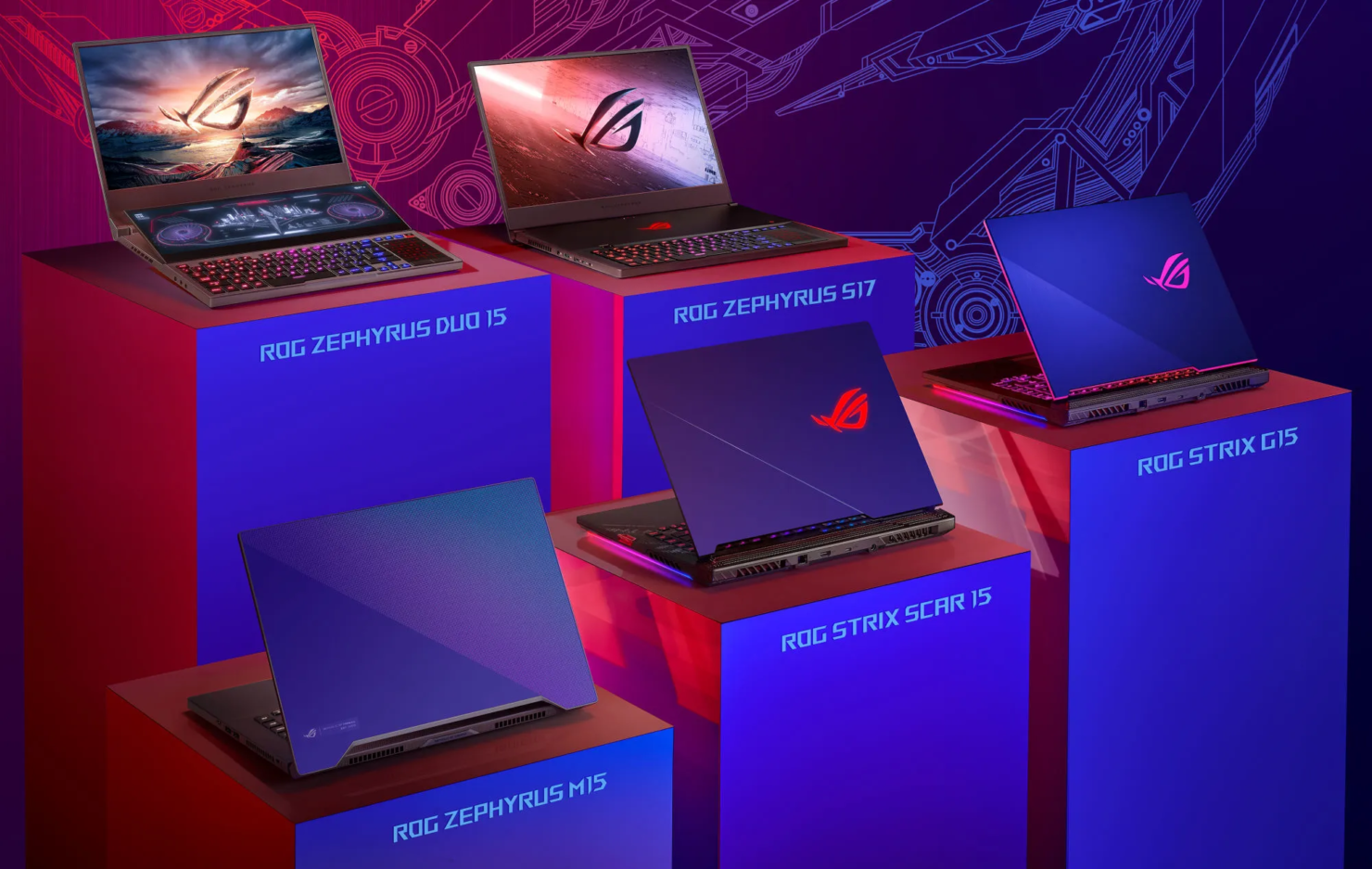 Between striking new chassis designs, thoughtful quality-of-life additions, and updated gaming hardware, there’s something for everyone in the spring 2020 ROG lineup. The Zephyrus Duo 15 and its unique secondary touchscreen will turn a lot of heads this year, as will the bold colors of the ROG Strix G15 Electro Punk laptop and its bundle of matching accessories. ROG's slim Zephyrus machines are more portable and powerful than ever, and for those seeking esports glory, ROG Strix SCAR laptops continue to set the performance standard.

The CPU is the beating heart of every laptop, and ROG is excited to bring Intel’s 10th Gen Core processors to the latest ROG laptops. With up to eight cores and sixteen threads, these CPUs are primed to perform in demanding workloads like content creation or streaming while gaming.

Intel’s processors were already known for their high clock rates, but this generation revs up even higher. 10th Gen chips can achieve boost clocks as high as 5.3GHz for snappy, responsive performance in everyday tasks and brute number-crunching power when you need it. The latest round of ROG laptops benefits from unusually speedy RAM, too. Intel’s 10th Gen CPUs call for 2933MHz DDR4 by default, but on models with eight-core CPUs, ROG uses DDR4-3200 memory that’s 10% faster than stock. 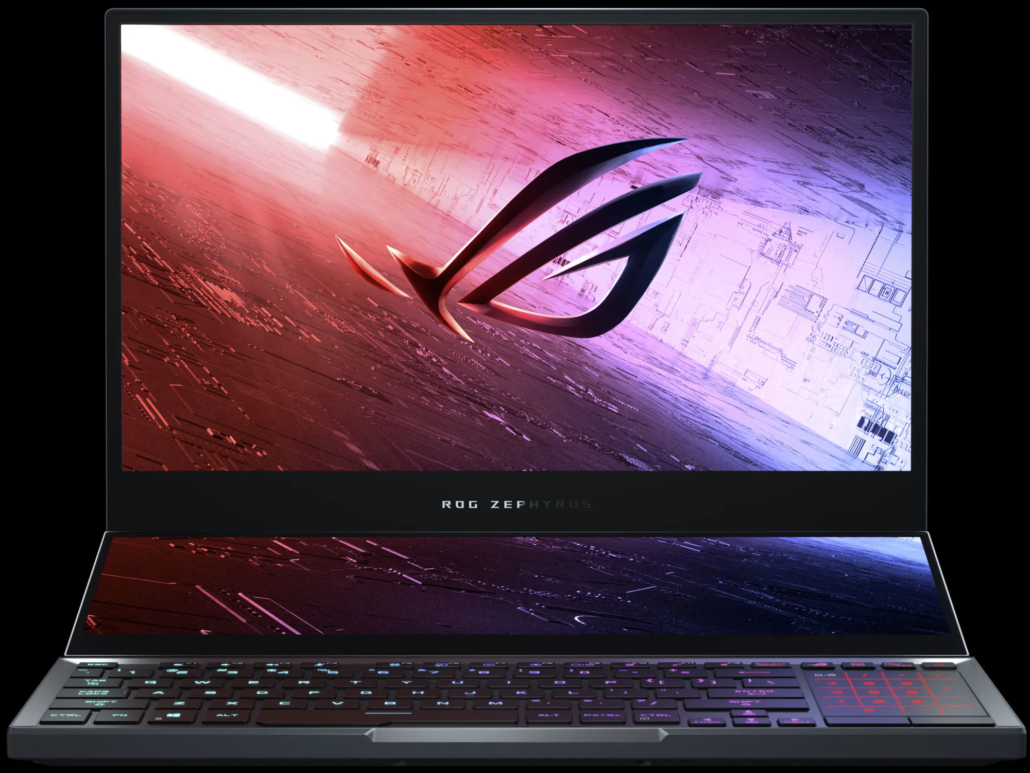 Gamers know that no single component affects gaming performance more than the GPU. ROG laptops unleash the latest GeForce RTX GPUs from NVIDIA, including the GeForce RTX 2070 SUPER and the range-topping RTX 2080 SUPER in select models. NVIDIA has already carved out new performance territory in desktops with its SUPER series, and now it’s time for gaming laptops to benefit from a performance boost.

Based on the latest Turing architecture, these GPUs take NVIDIA’s already-successful formula and dial it up another level. Armed with augmented CUDA cores for programmable shading, RT cores for ray-tracing, and tensor cores for AI-powered functions, GeForce RTX GPUs provide dedicated hardware for the acceleration of real-time, lifelike lighting, shadows, and reflections. Advanced DLSS technology uses the tensor cores and NVIDIA deep-learning algorithms to maximize performance in games that put a heavy load on the GPU.

The GeForce GPUs in ROG laptops are primed for optimal performance. The carefully-planned Intelligent Cooling thermal designs let the laptops deliver more FPS via ROG Boost, which uses thermal envelopes and clock speeds that exceed the baseline specifications for a given GPU, and can even extend to factory overclocking that goes beyond stock clocks. The CPU also benefits from advancements that keep temperatures low enough to sustain high Turbo frequencies.

When tucked inside the tight confines of a laptop, processors need innovative cooling technologies to reach and sustain their highest operating frequencies. This is especially true for the ultra-slim models in ROG's 2020 lineup, where space to move cool air is at a premium. To make sure that 10th Gen Intel Core CPUs perform at their best, ROG is introducing a new element to their comprehensive Intelligent Cooling suite: liquid metal.

The impressive thermal conductivity of liquid metal has long been understood among desktop DIYers seeking the best performance, but until recently, it had to be hand-applied to chips in an expensive and time-consuming process. Its ability to conduct heat away from the CPU remained so attractive that ROG's engineers spent over a year developing a patented process for automating its application during assembly. ROG uses the additional margin provided by the improved heat transfer between the CPU and heatsink to reduce fan noise, lower CPU operating temperatures, or increase performance by up to 10%. This new thermal compound is just one aspect of the comprehensive thermal design philosophy. A laptop is more than the sum of its parts. ROG thoughtfully plan out the best mix of cooling hardware for each of their systems and then tie it all together with software tools that adjust acoustics and performance depending on the task at hand.

It all starts with a chassis thoughtfully designed  to accommodate effective fans and heatsinks. A special liquid crystal polymer lets them fit 83 fins in each of the advanced n-Blade fans, increasing airflow by up to 17% compared to traditional designs. That cooling air flows through heatsinks with ultra-thin fins that maximize airflow and surface area alike to ensure the best heat dissipation. Dust is the worst enemy of fans and heatsinks, so they designed self-cleaning thermal modules that use centrifugal force to catch dust particles and eject them from the chassis. 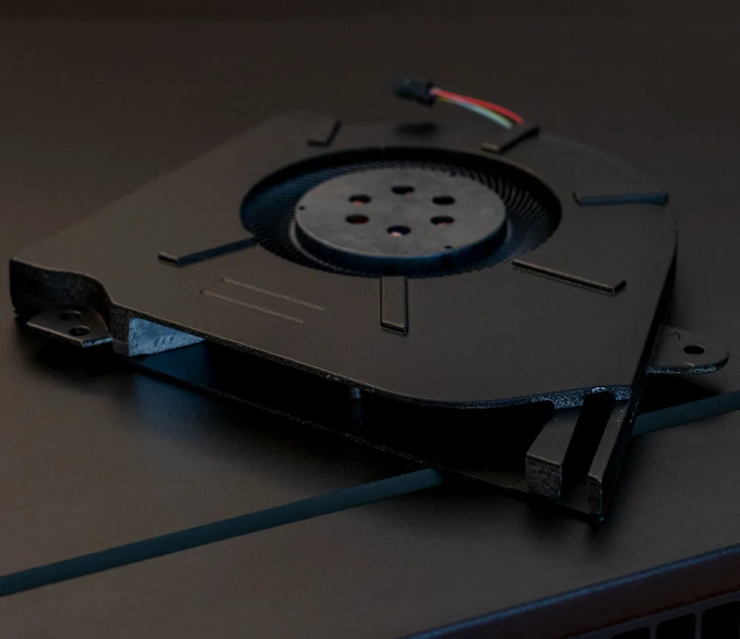 Since cooling and performance requirements can vary quite a bit based on the task at hand,  they developed simple and intuitive controls for balancing the speed and acoustics of their laptops. With a keyboard shortcut, you can toggle between three different Operating Modes. Silent Mode prioritizes quiet operation by lightly restraining performance. It’s perfect when you’re studying at the library or streaming some Netflix. Performance mode balances gaming grunt and acoustics, giving you the power that you need for victory while keeping fan noise low. The peak noise targets vary a bit by model, but overall you’ll find that the latest ROG laptops are unobtrusive companions in the Performance and Silent Operating Modes, even under load. Turbo Mode gives you full access to the system’s processing potential for when every Hertz counts.

ROG Is Offering Options For Both Gamers And Creatives

Whether you’re a competitive gamer or a committed creative, there are many reasons to be excited about the new displays that ROG has on offer in this year’s fleet of ROG laptops. ROG insisted that high-refresh-rate displays provide the best gaming experiences, and year after year ROG has backed up that claim by offering gamers fast panel options. They were the first to bring 120Hz screens to laptops, and they have led the industry’s adoption of high-refresh laptop panels ever since. This year, ROG introducing the first 300Hz laptop displays. These panels provide lightning-fast, crystal-clear visuals that heighten your immersion and enable you to respond to gameplay as fast as your reflexes will allow. 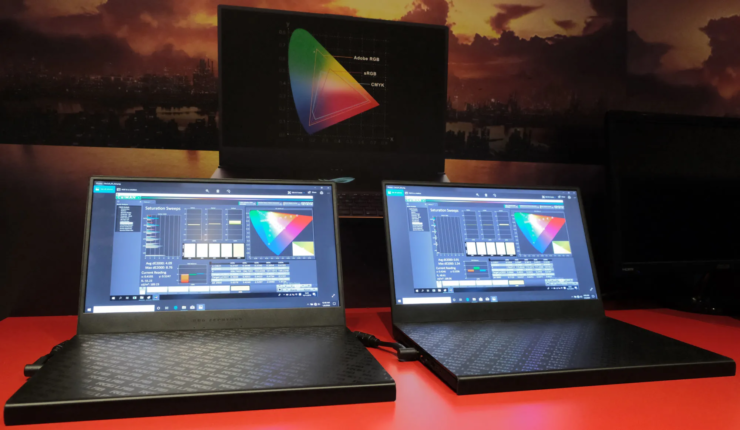 Speed matters, but color accuracy does, too. They also expanded the number of ROG's displays that qualify for Pantone validation. These displays are factory-calibrated so that their new owners can trust they’ll produce accurate colors straight out of the box. They also provide a new 4K panel option for select laptops, including the Zephyrus Duo 15 and Zephyrus M15, that covers the full Adobe RGB color space. This panel can display a much broader range of colors than standard sRGB displays, making it a potent tool for content creators. 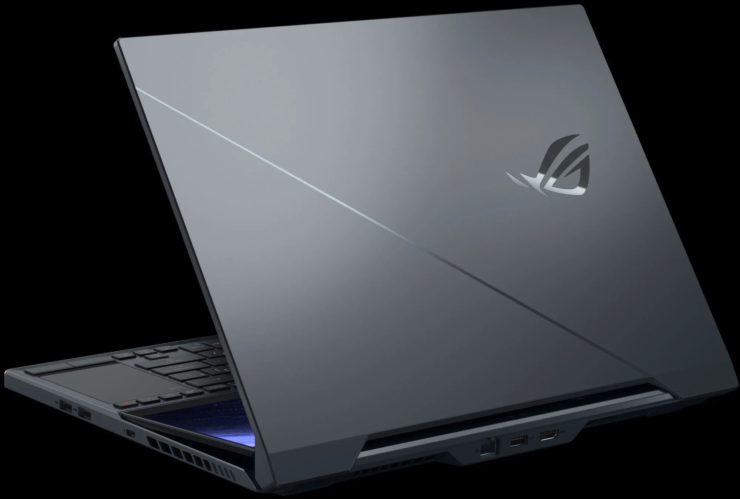 4K panels are also stunning for gaming. Individual pixels are virtually indistinguishable on a 4K 15.6” or 16.3” display, resulting in images that are lush and immersive. Gaming at this resolution can be quite taxing on a GPU, especially with in-game quality settings turned up, so ROG paired 4K panels in ROG laptops with NVIDIA’s G-SYNC technology. G-SYNC synchronizes the refresh rate of the display with the frame rate of the GPU in real-time so that you can enjoy tear-free gaming without input lag or judder. Typically, you have to choose between NVIDIA’s G-SYNC and Optimus technologies when you’re buying a laptop. 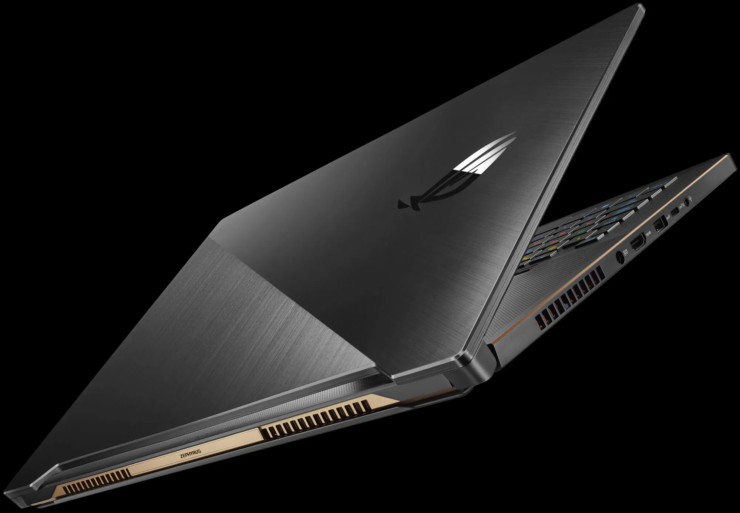 It’s a tough choice. Do you want to have smooth, tear-free visuals in your games? Or do you want the battery-saving ability to power down the GPU and rely on internal graphics whenever you don’t need the extra pixel-pushing power? With their proprietary GPU Switch technology, that’s a choice that you don’t actually have to make. A few quick clicks and a reboot is all it takes to switch between the two modes.

The ROG laptop lineup already includes some of the slimmest and lightest gaming laptops on the market, but they are not done exploring new ways to make them even better-traveling companions. In 2020, ROG made a New Year’s resolution to slim down the size of the power adapters. Their latest 180W adapter is a svelte 23mm-thin number that’s 20% smaller than the previous generation and easy to bring along on a business trip. A new 240W adapter for more powerful models further demonstrates ROG's commitment to slimming down your laptop bag. Not only is it thinner than its 230W predecessor, but it also takes up 19% less space while delivering 10W more power. 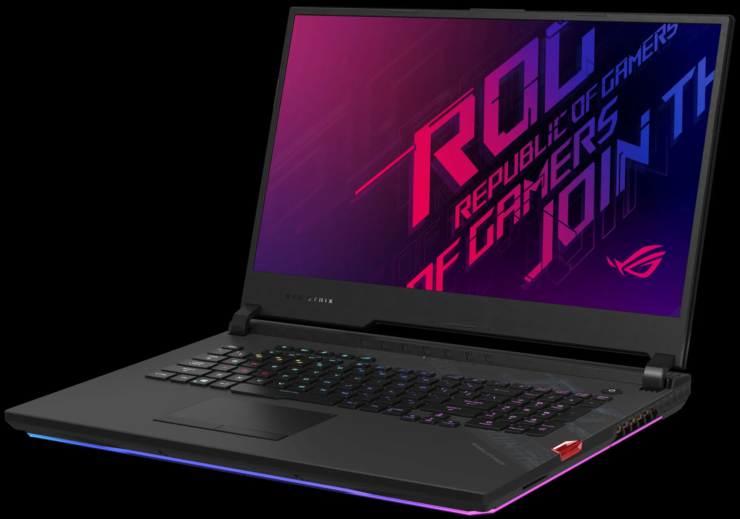 ROG also increasing the portability of the Zephyrus laptops by including support for Type-C charging via USB Power Delivery. This gives you the option of packing Type-C adapters with up to 65W of juice and leaving your full-sized power adapter at home. When you don’t have access to an outlet, a compatible USB power pack like the ZenPower Pro PD allows you to recharge. USB Power Delivery also works in reverse on these Zephyrus models, so they can serve as a recharging station for your compatible devices. 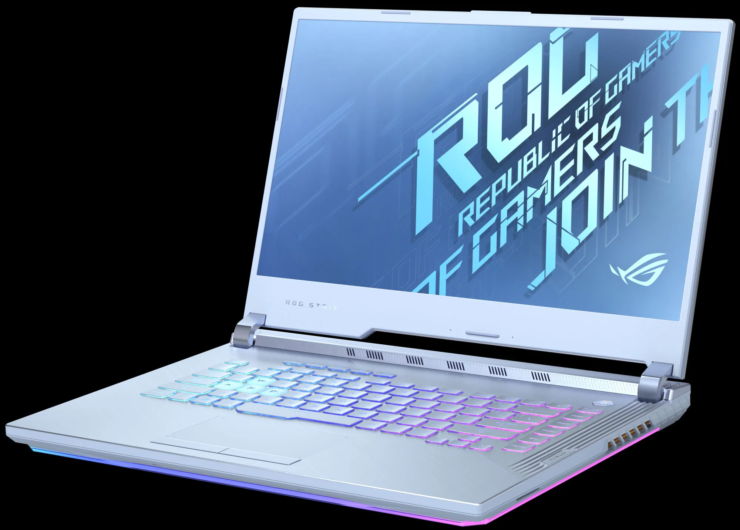 You’ll need your notebook’s included adapter for gaming, as it delivers the full power the CPU and GPU need for intensive workloads. When gaming isn’t in the cards, USB Type-C charging gives you the opportunity to lighten your laptop bag by leaving your full-sized power adapter at home when you head out for a day of work or school.

With new technology, new hardware from Intel and NVIDIA, and contemporary new designs, the spring 2020 lineup of ROG gaming laptops is ready to be the choice of every champion. They’ll be headed your way in the coming months.