The Ys series is one of the longest-running Japanese action role-playing game series, but it only started getting some well-deserved recognition in the West only recently, mostly thanks to Ys Seven, originally released on PSP back in 2009. While other entries did get released in the West, notably the excellent Ys VI: The Ark of Napishtim and the remake of the third entry in the series, Ys: Oath in Felghana, it's with Ys Seven that the series developed by Falcom started finding a much bigger audience. Now, years after the original release, PC players can enjoy the seventh entry in the series with some enhancements that make this new release the definitive version of the game. 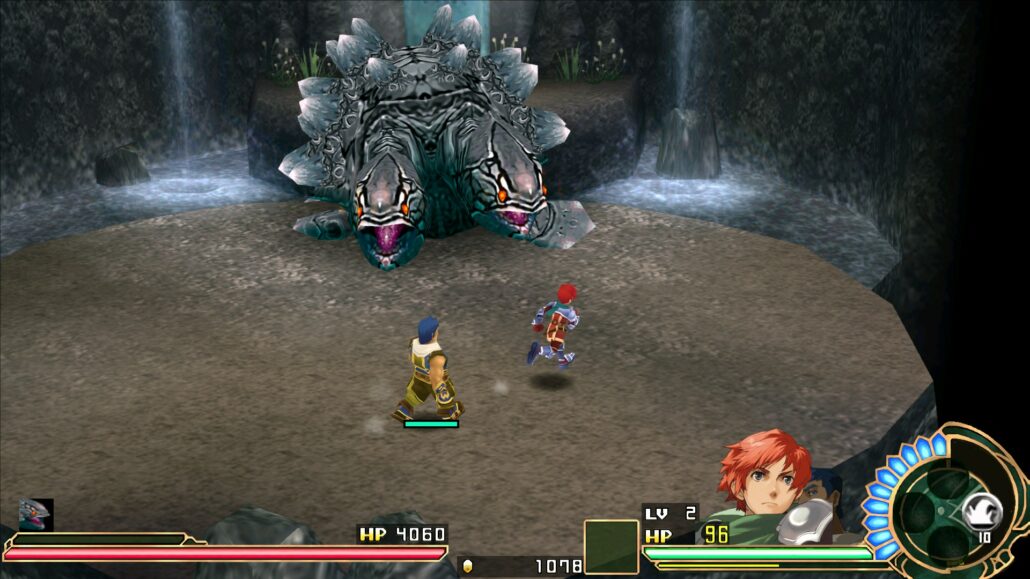 Ys Seven stars, like all other entries in the series bar Ys Origins, the red-haired adventurer Adol Christin as he reaches the Afrocan continent and the Kingdom of Altago together with his long-time friend and adventuring partner Dogi. Soon after landing in the capital, Adol is summoned by the king of Altago, who asks Adol to look into some mysterious events happening all over the kingdom. Never one to turn down adventure, Adol sets out to find the answers the king is looking for, eventually meeting the mythological beasts that have protected the land for centuries and an evil that wants to take them down to claim the land for itself.

Ys Seven is the first entry in the series where Falcom put greater emphasis on plot and character development. This resulted in a slowing down of the series' typical quick pace, as more time is needed to develop all the story elements. While the end result is definitely nice, some old time fan of the series will definitely be put off by this, especially in the first few hours, where the story is very slow. As for the main characters, they're all nicely developed, with even silent Adol personality emerging through the possible answers players can give during select dialogues. The game also features small callbacks to previous entries in the series as well as character players have met in Ys VI. Like all entries in the series with the exception of the second one, it's possible to play and enjoy Ys Seven without having played any prior game. 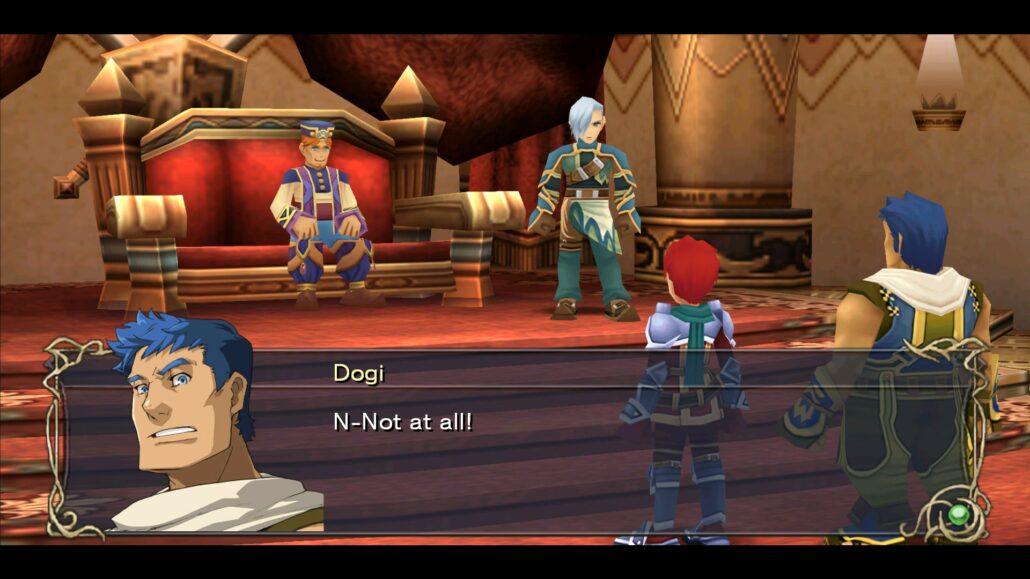 Falcom never slept on its laurels with the Ys series, always spicing things up with new mechanics and features, and the same happened with Ys Seven, which is the first game to feature a party system. For the first time ever, players can bring up to three different characters on the field and in battle, each one wielding a specific weapon type and different skills, which are learned through the weapons themselves. The different weapon types belong to one of three different classes - Slash, Crush and Pierce, and several enemies are weak against one of the three types of damage class. This requires players to bring a balanced party and switch character on the fly depending on the enemy, making battling monsters more than just mashing the attack button over and over. Skills are varied enough between characters, so combat manages to stay fun even after hours.

Ys Seven is also the first entry in the series to introduce some defensive options, which greatly alter the way the game is played. Alongside a simple dodge maneuver, players can also guard attacks with the Flash Guard ability, which is triggered by pressing the right buttons right when an enemy strikes. Flash Guard not only negates damage, but also increases the EXTRA gauge significantly, used to unleash the all-powerful Extra Skills, but also makes all attacks critical ones. Performing is not as easy as it is in later entries in the series, but it's still an invaluable option at higher difficulty levels, where enemies have quite a bit of HP. The series challenge level is also intact somewhat, only made it easier by the ability to carry a set number of healing items, another first for the series. Players obviously have the choice to play the game like older entries to make it more challenging.

While Ys Seven's battle system is definitely fun, it obviously lost some of its appeal with the release of Ys: Memories of Celceta and Ys VIII: Lacrimosa of Dana, which both introduced plenty of refinements. If you have played any of them, you feel Ys Seven a bit clunky at times. 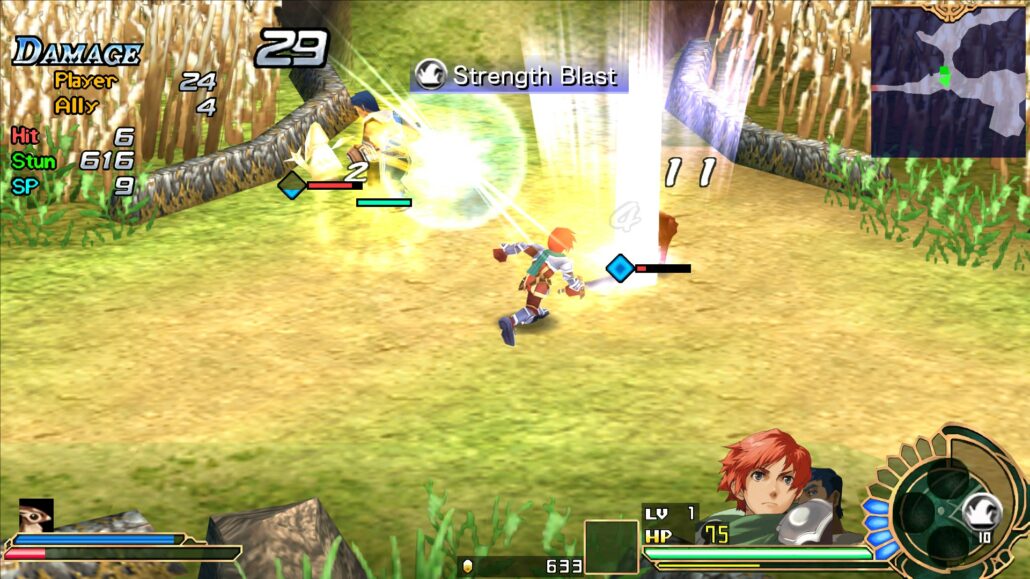 The combat isn't the only area where Falcom revolutionized the series considerably, as Ys Seven introduces several mechanics that add more depth to dungeons and field exploration. For starters, fields now feature several different harvest points, where players can gather materials that can be used in shops to create potions and craft weapons, armor pieces and accessories. Dungeons are also better than ever, with players having to use some special Key Items to progress, like one that allows breathing underwater, another that freezes lava and so on. These new items add some welcome puzzle-solving elements that make exploring dungeons more fun than ever.

Having been originally released on PSP, there was little the team could have done to improve the PC release of Ys Seven. The graphics options are obviously limited, and the enhancements only manage to remind players how the game wasn't even one of the best looking PSP games. Still, character models are somewhat nice in their simplicity, and the 60 FPS frame rate makes combat even more fast paced and exciting. Additionally, XSEED took the chance to fix some issues with the script, a very nice move that will make even those acquainted with the original release follow through the story again. The soundtrack, as it usually is for Falcom games, is excellent, with some memorable tracks like the opening theme, Innocent Primeval Breaker, and the boss theme, Vacant Interference.

It took quite a long time for Ys Seven to hit PC, but the wait was definitely worth it, with an enhanced port that does its best to make the game as enjoyable as possible. Sure, many of the gameplay mechanics have been improved in later entries of the series, but Ys Seven still manages to be an engaging experience that no fan of fast paced action role-playing should pass on.

Reviewed on PC (code provided by the publisher). You can buy it for PC via Steam or for PSP via Amazon.

Ys Seven is the first entry in the long-running series to feature a variety of features and mechanics that have become a staple of the series, such as a bigger focus on the story and the party mechanic. While the renewed focus on story slows down the pace a bit, especially with its slow first few hours, the game's fast-paced combat system, engaging dungeon exploration, and fun boss battles make Ys Seven one of the best action role-playing games released in years. With some technical enhancements and a 60 FPS frame rate, the PC version is the definitive edition of Falcom's excellent RPG.