Open world games are officially the norm. The tight halls of Shadow Moses have given way to sprawling deserts in Metal Gear Solid, I’ve travelled farther in Velen on my horse in The Witcher 3 than I ever have without a vehicle in real life and I’ve spent more time climbing towers in a myriad of games than I care to remember, to be honest. It’s amongst this “Open World Fatigue” that I’ve jumped into Xenoblade Chronicles X, a game whose scale promises yet more predictable MMO style fetch quests and linear exploration. Or at least, that’s what I’d feared.

In reality, Xenoblade Chronicles X has given me the most impressive and immersive Open World experience I’ve had in the last few years; for that, I feel a genuine sense of gratitude towards Monolith Software. Never before have I felt so very small in any video game, and from my ant-like perspective the planet Mira is one many times more exciting than any virtual world I’ve ever seen before. 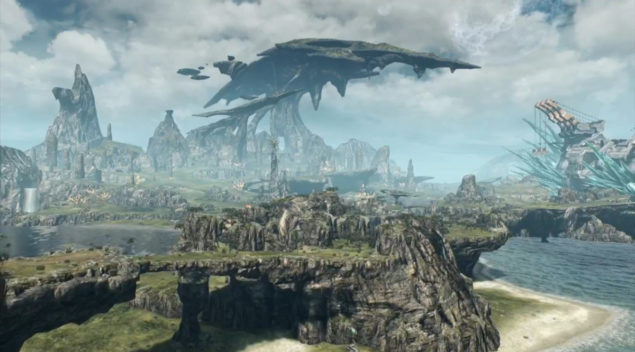 First of all, Xenoblade Chronicles X is a rare Open World JRPG, a sequel to the Wii’s impressive Xenoblade Chronicles and quite possibly the best game available on the Wii U. You begin with your traditional create-a-character affair and awake from stasis, greeted by Elma, who will quickly become a familiar face. She explains that humanity is fighting for it’s survival after being caught in the crossfire of an alien war and the last survivors of the species have crash landed on planet Mira, your new home. And what a home it is.

The beginning of the game quickly shows you how gorgeous this game can be, in a shouldn’t-be-technically-possible on WiiU kind of way. The draw distance is absolutely incredible, putting to shame almost every console open world game that I can think of, and that’s important since giant rock formations, incredible mountains and so much more adorn the skyline. These are sights that are relegated to static backgrounds in a majority of JRPGs, but here the seemingly impossible structures are all there for you to climb - and you will climb them. You will fly the skies, you will ride across the plains you will clamber up mountains - all with a sense of wonder that I haven’t felt since the opening scenes of Oblivion.

The world of Mira is set into five distinct areas - much less varied than the original Xenoblade, but far larger. Primordia is where you begin, and where humanity’s final bastion of New Los Angeles is based. It’s a mostly lush, green world with towering mountains, rock bridges, lakes and even giant alien dinosaurs. This is a fantastic starting point for the game as you immediately see gorgeous, unrestricted views and a futuristic city looming in the distance. It’s this sense of scale that permeates throughout the game and sets an atmosphere for what’s to come. 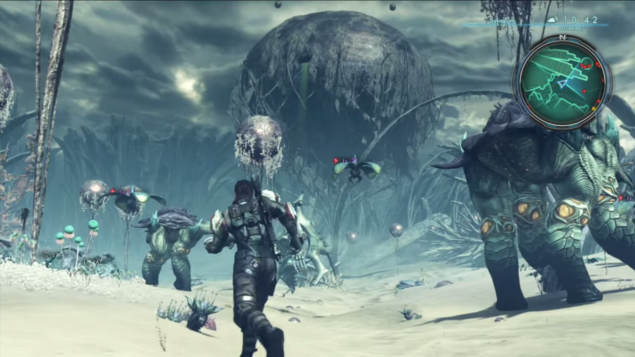 Other areas include Noctilum, Oblivia, Sylvalum and Cauldros; these are swamp-like, desert, alien-landscape and volcano themed areas, respectively, with story slowly introducing you to these areas in that order - if you choose to follow the story, that is. In Xenoblade Chronicles X, absolutely nothing is off-limits. There are no loading screens between these areas, despite each being visually varied and intimately detailed, and you can travel there from absolutely any point in the game. Just start sprinting and you can make it to the final area in the game - you’ll just have to avoid a bunch of high-level creatures on the way.

The creatures themselves only add to the sense of discovery. Finding a new monster immediately compels you to fight it and find what spoils it may keep. Some monsters are non-violent and will let you pass while others stand guard to treasures, caves or just offer a high level of challenge that you’ll crave if you spend enough hours in the world. You could challenge a level 92 dinosaur immediately if you wished, but it won’t be for as-many-hours that you’ll have a real chance of winning - showing that you’ll get out of this game exactly what you put in.

It’s a shame that I’m not as crazy about Xenoblade Chronicles X’s battle system as I’d like to be - it’s fine, it’s engaging and it definitely works but it almost feels like a step backwards when compared to its predecessor. In Xenoblade Chronicles the Monado Arts offered a variety of unique ways to change the tides of battle, while in Xenoblade Chronicles X these are absent, and the fact you have a wider variety of characters to go into battle with means your own Arts are less reliant on your party. In the previous game, a well-coordinated attack would be the best way to topple and defeat enemies, while now you can inflict the necessary status ailments and enough damage to win the day all by yourself - with the exception of tougher enemies, such as bosses and tyrants, who will pose a much greater threat. 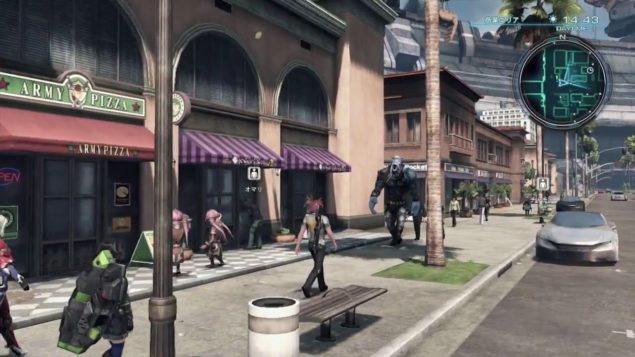 My one major gripe with the game is simultaneously something I have to praise - the use of the GamePad. The GamePad displays FrontierNav, a map of the world which segments the open world into manageable chunks, offering certain tasks you can complete to “finish” each segment - essentially separating the world into a series of smaller quests - an OCD sufferer’s worst nightmare. It’s handy for easy access to a larger map - which is entirely necessary - a good way to easily see where you have and have not explored, and can tap areas to fast travel to them. What’s not good, is that all of this can be done only with the GamePad. Despite the fact the entire game can be played fine on a Pro Controller, things like a world map and fast travel can only be done with the GamePad, and this seems simply insane. There’s no reason why a map option in the start menu could not have been implemented.

Other than all of that, yes, you can predict the kind of things you’ll be doing here - fetch this many items, kill this many enemies, etc. The typical MMO-like quest archetypes are all here, with a few caveats. What’s nice is that quests are separated into Story, Affinity, Normal and Basic, with their importance declining in that order. This makes it easy to prioritize which quests are worth your time. Story quests can be gated off behind certain requirements, such as completing a certain Affinity quest, exploring an area to a certain percentage or simply getting to a higher level. A problem with Story and Affinity quests is that once you accept them, you cannot accept another Story or Affinity quest, and if that quest requires a set number of party members you’re stuck that way until you complete the quest. This became a problem twice in my playing of the game, where I was either bored of or stuck on an aspect of a quest, but had no choice but to persevere. 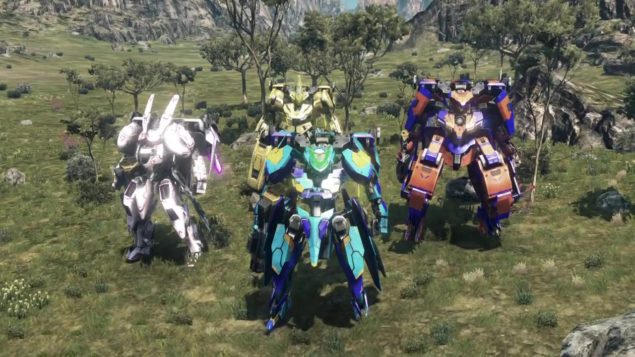 Ultimately, Xenoblade Chronicles X feels like it’s about spectacle. Looking at incredible vistas in game feels incredible at times, and once you eventually gain the use of a Skell - a piloted robot mech - exploring the world becomes even better; you’ll find yourself bounding about the world and riding across the plains in record time, but you’ll still feel small. No matter how accessible or large you become, the world still makes you feel tiny - in once instance during a heated battle with multiple characters inside their Skells I ejected and went to fight on foot - or should I say, against the enemy’s foot. The size difference is overwhelming and games known for their spectacle such as Bayonetta 2 need to step up their game - because I have never seen something that has left my jaw open so very often.

Xenoblade Chronicles X has its flaws, but they’re easily ignorable when you embrace the world. Sights are gorgeous, battles are intense and the story has some surprisingly epic twists and turns. This is the Open World game I’ve wanted for so long, offering a level of freedom the others I’ve played just don’t - and all this without mentioning the myriad of customisation, hidden areas, secrets and unlockables that clever players will find.