With no new entry in the series in nearly a decade, Left 4 Dead fans are feeling pretty ravenous. Plenty of developers have attempted to whet their appetite, but few games from the latest crop of co-op shooters (we’ve had Strange Brigade, Overkill’s The Walking Dead, Generation Zero, and more in just the past year) have quite satisfied. Even Left 4 Dead creators Turtle Rock Studios dropped the ball with 2015’s Evolve. Enter World War Z, the latest (and one of the most bald-faced) attempts to recapture L4D’s gory glory.

World War Z’s biggest addition to the formula? More zombies. Lots more zombies – hundreds in a single swarm. Maybe not the most groundbreaking notion, but hey, sometimes bigger really is better, and it’s not like Valve is presenting any alternative ideas! So, is World War Z the Left 4 Dead successor people have been waiting for or is this another four-player fiasco? Let’s find out… 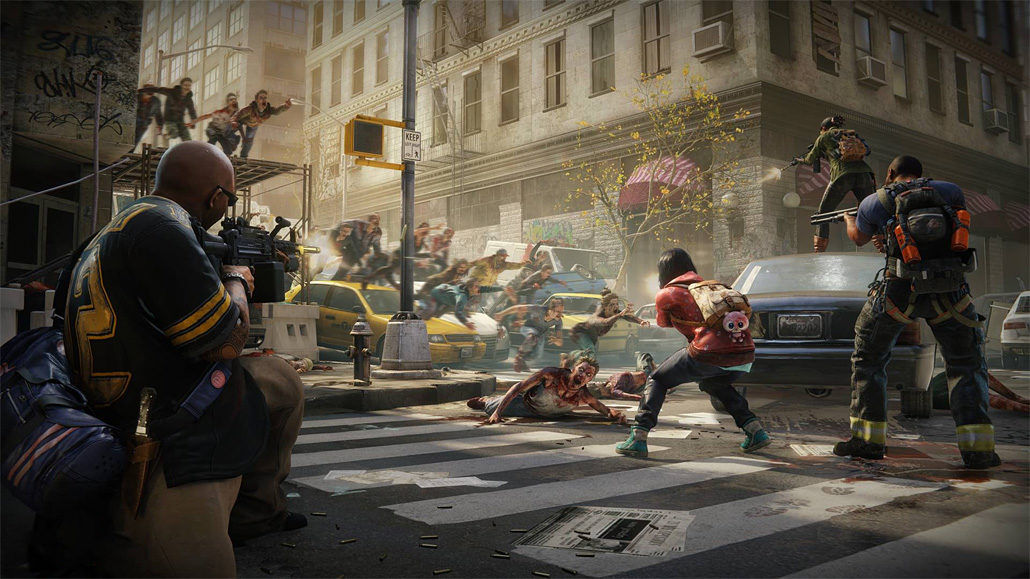 As we’ve established, World War Z is a four-player co-op zombie shooter very much in the Left 4 Dead vein, although the WWZ license means the game adopts a more global view, taking place in a series of locations around the world (New York, Jerusalem, Moscow, and Tokyo). Unlike Left 4 Dead and its sequel, which each told one continuous story with a single party, World War Z serves up four largely unrelated short stories and groups of survivors. We get significantly less character development as a result, although the scenery is more varied. Honestly, the story isn’t hugely important in these type of games, so World War Z’s simple approach isn’t a huge drawback.

Each of World War Z’s locations consists of two or three missions, each of which take about 15 to 20 minutes to complete. Once again, these closely follow the Left 4 Dead blueprint – make your way to a destination while blasting packs of zombies and keeping your head on a swivel for dangerous special zombie types. Many of these, like the Bull (basically a reskinned Charger) and the Lurker (Hunter) are directly cribbed from L4D. Along the way, you’ll also regularly find caches of ammo, weapons, and other goodies helpfully lying around. So far, so familiar! 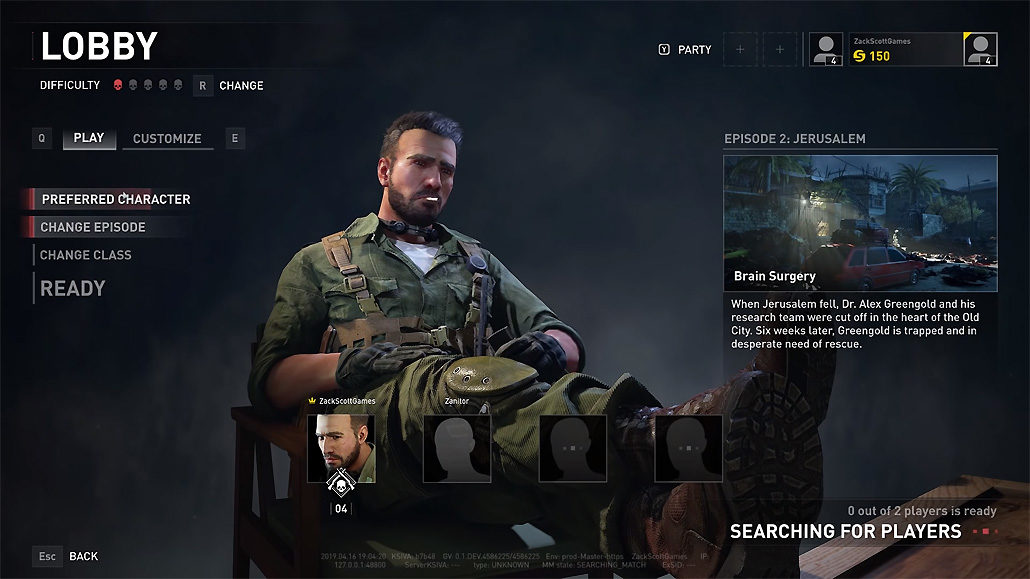 Thankfully, World War Z adds a few new wrinkles to the formula. One is the addition of classes – six in all, ranging from standards like the Gunslinger and Medic to more unique ones like the fire-obsessed Exterminator (my personal favorite). Second, missions are a bit more complex, with a greater variety of objectives, which makes collaborating with your teammates a little more challenging and fun. World War Z boasts some pretty solid level design, although not every mission is created equal. Some, like the Moscow mission that tasks players with activating a Russian superweapon hidden beneath the Kremlin, are a blast, while a couple of escort missions are less successful. Overall, there are more winners than losers.

Of course, the thing that really sets World War Z apart is its much-touted Swarm Engine. The game can throw up to 500 zombies at you at once, and, even between the big swarms, you’re going to be dealing with large groups of the undead. Just to compare, I went back and watched a few videos of Left 4 Dead 2’s most intense missions, and they now feel downright sedate by comparison. There’s a consistent feeling of intensity to World War Z that will really get your palms sweating. 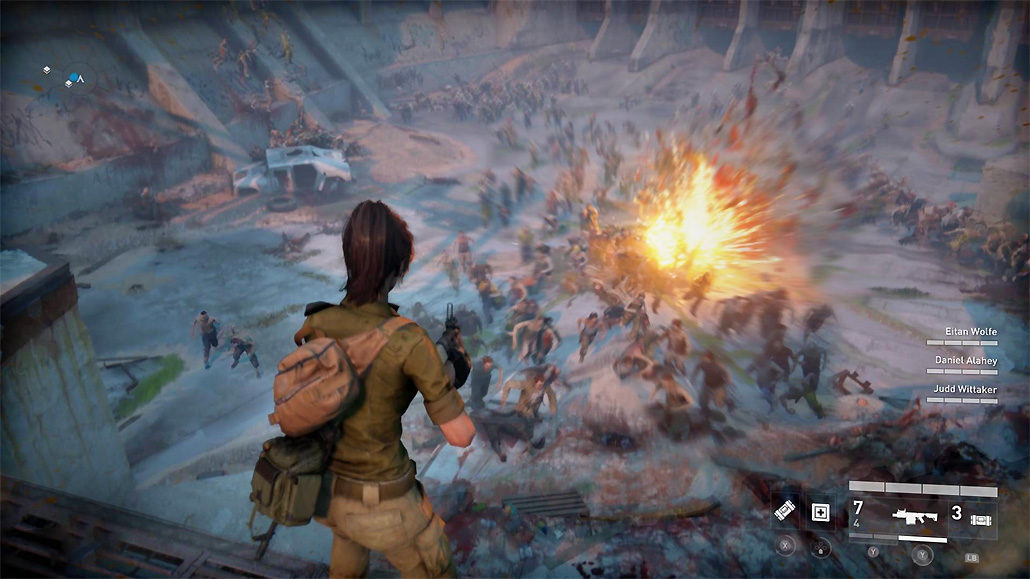 This intensity reaches its peak during the game’s full-on horde assaults, which usually throw multiple waves of hundreds of zombies at you. Once these really big groups get together, they start piling up to overcome obstacles and can react in some interesting, dynamic ways. Typically, you’re given a warning of a couple minutes before the horde hits, giving you the opportunity to set up turrets, barbed wire, and other defenses, although make no mistake, this isn’t a tactical game by any stretch of the imagination. For the most part, you dispatch the hordes the good old-fashioned way – by blowing them up real good. World War Z includes various limited-use heavy weapons, and there’s something deeply satisfying about unleashing a rocket launcher or souped-up shotgun on a pile of writhing walkers and watching as the bodies and severed limbs fly. Developer Saber Interactive made a lot of big promises about their swarm tech, and, for the most part, they’ve delivered. 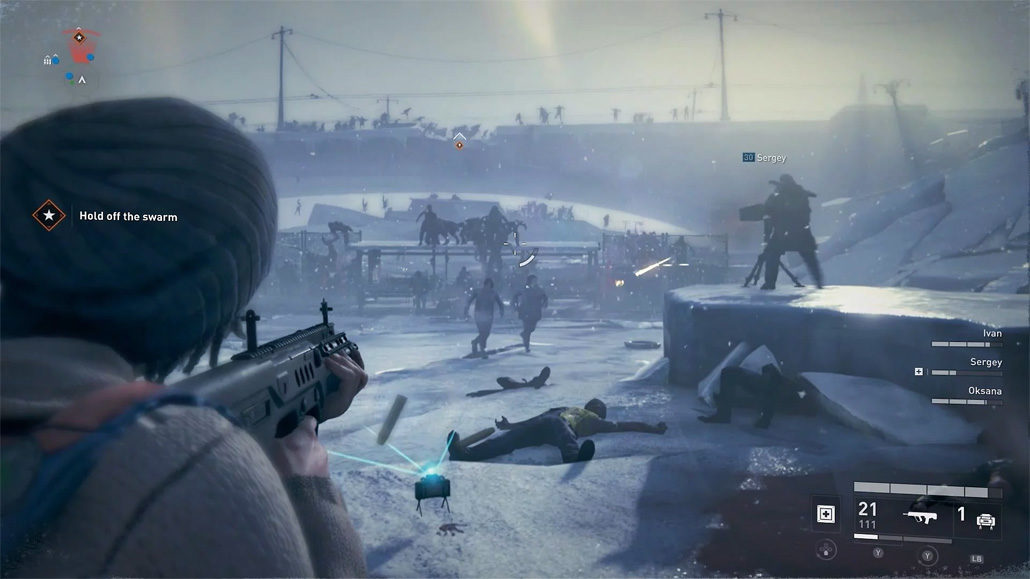 Basic controls and mechanics are mostly on point. Shooting isn’t as tight as it could be, but World War Z is about pointing in the general direction of a pack of zombies and making them go splat, not precision marksmanship. Clicking the left analog stick to toggle sprinting on-and-off isn’t great, and your melee attack is definitely a bit overpowered, but those are relatively minor complaints. The game definitely won’t blow you away visually, but performance is fairly solid, which is impressive given how much can be happening on screen at any one time.

Unfortunately, World War Z isn’t without its technical issues. You’ll witness plenty of zombies stuck in things or levitating eerily through the air, and the game crashed on me a couple of times, too. While there have been some reports to the contrary, I had no issues with matchmaking, quickly finding a full team no matter what stage I picked. Once in a mission, there were a few oddities – sometimes zombies would randomly disappear, or my partners would be shooting at an enemy I couldn’t see. Sometimes partners with slower connections started choppily phasing around the room, which could be more than a little distracting. So yeah, the game can be quirky, but the idiosyncrasies don’t sink the overall experience. 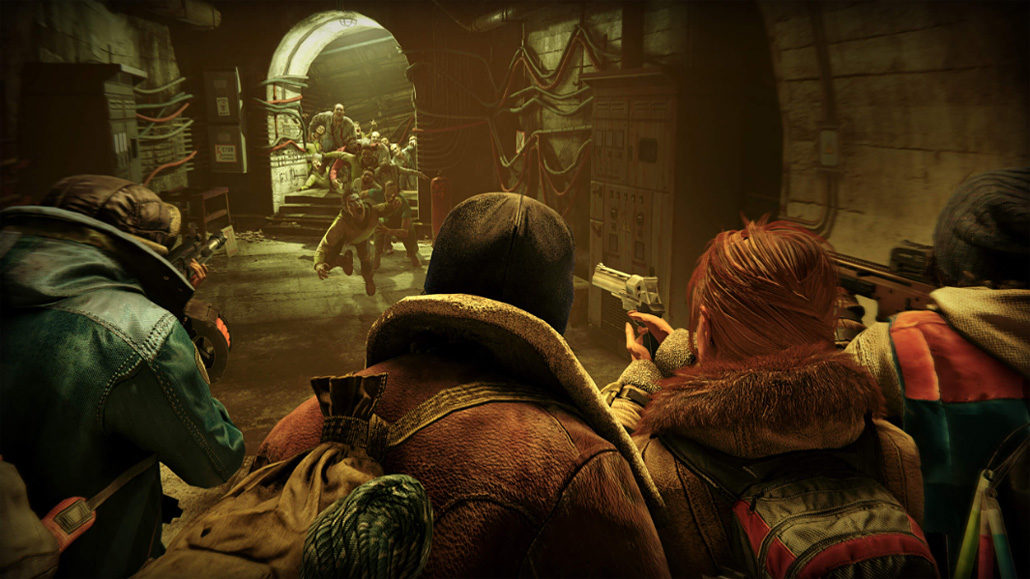 World War Z is a relatively slim package – you can experience everything the core co-op campaign has to offer in about four hours. That said, the game is meant to be replayed, with multiple difficulty settings, and plenty of grinding to be done to improve your favorite classes. There’s also a PvPvZ option, which includes several Deathmatch, King of the Hill, and Capture the Flag variants. These are fun enough, but overall PvPvZ feels a bit underbaked – classes feel unbalanced and there just aren’t a lot of maps. Ultimately, your desire to keep playing World War Z will likely live or die based on whether you can assemble a reliable team to ride out the apocalypse with.

This review was based on a PS4 copy of World War Z provided by publisher Focus Home Interactive.