If there's anything that defines the Final Fantasy series is the sense of familiarity. Those who have enjoyed the series for years can always be sure to find recurring elements that tie everything together, despite games being set in different universes. World of Final Fantasy brings this sense of familiarity to new heights, while sporting some new gameplay mechanics that do make the game stand out from the rest of the series.

World of Final Fantasy tells the story of Lann and Reynn as they go from leading seemingly normal lives in the seemingly normal Nine Hills Town to being the saviors of the mysterious world of Grymoire, a world where magical creatures known as Mirages roam freely. Some Mirages, however, are less free than others, used as weapons by the Bahamutian Federation to force its rule upon other countries. Following their first short venture into Grymoire, where the siblings learn more about the power that defines them as Mirage Keepers, Lann and Raynn, together with the talking Mirage Tama, set out on a journey to reawaken their lost memories, and save Grymoire and its inhabitants from the tyranny of the Federation. 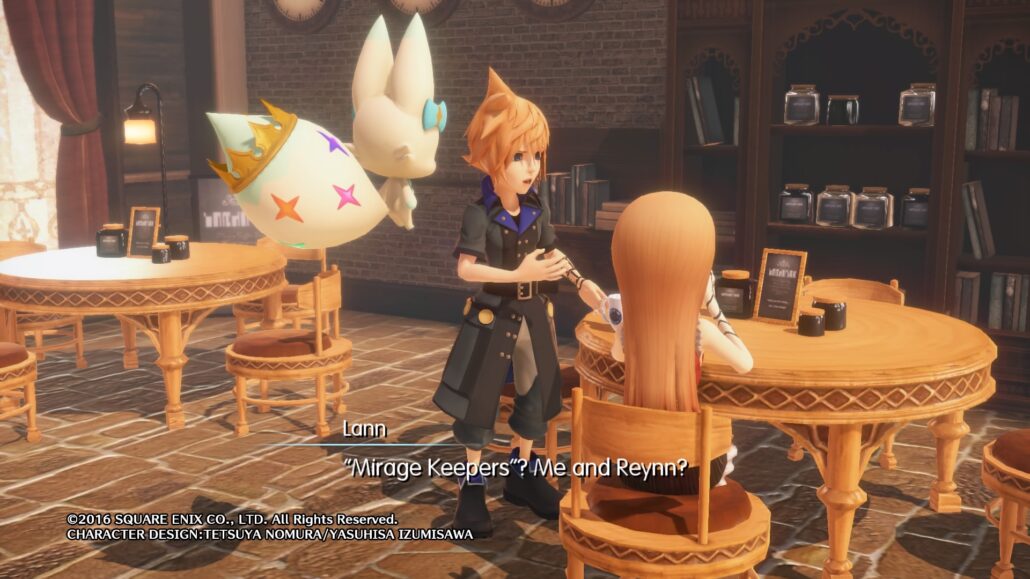 Right from the beginning, it's clear how the World of Final Fantasy story doesn't try to go too far from JRPG tropes, so those who have played other similar games won't have any trouble predicting some of the twists of the story. Despite being predictable, the World of Final Fantasy story is still quite enjoyable, thanks to cinematic cutscene directing, which gives a unique flair to even the most simple story sequence, and the unique art direction, which paints a very colorful world filled with cutesy renditions of NPCs and classic Final Fantasy heroes such as the Warrior of Light from the original Final Fantasy and others. Classic locations such as Cornelia also shine thanks to the beautiful art direction.

While the World of Final Fantasy story may be, at the end of the day, nothing to write home about, character interactions are on a whole different level. Lann and Reynn are two likable main characters, and the way they react to situations and interact with other characters is hilarious most of the times. Tama, on the other hand, can be quite annoying due to some odd quirk to her speech, but it's easy to get used to it after a few hours. Returning Final Fantasy characters are obviously well done, retaining some of their defining traits, such as the Warrior of Light's righteousness, while adding some more goofy traits that go hand in hand with the light-hearted tone of the game's story and world. With all dialogues being voiced, including Intervention quests, optional quests focused on Final Fantasy characters, and NPCs dialogues, the World of Final Fantasy story is presented so well that's hard not to find it enjoyable. 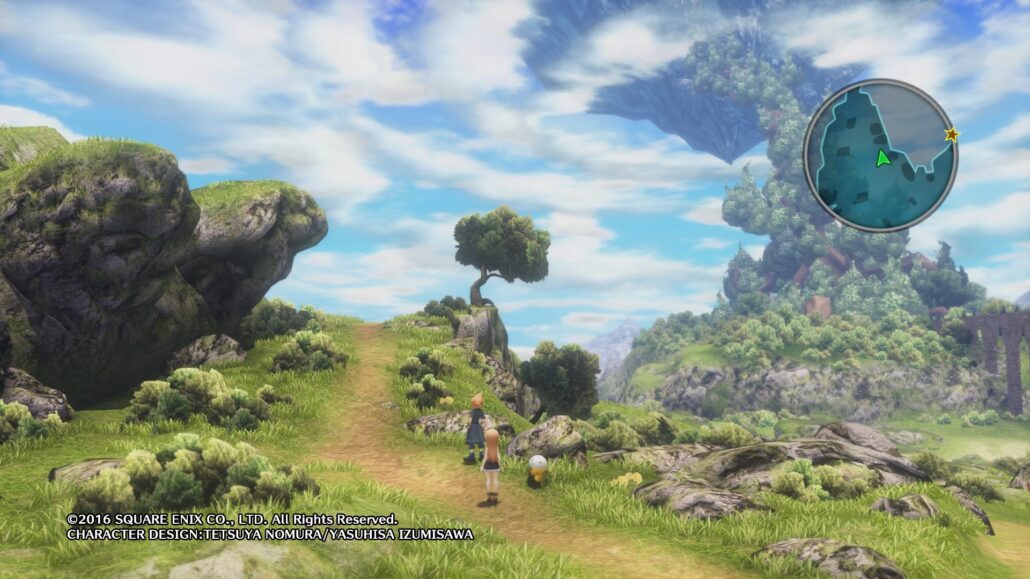 Like the story, the battle system of the game has been influenced by classic Japanese Role Playing Games, but it comes with some twists that make it extremely enjoyable, albeit a bit flawed. The system employed in World of Final Fantasy is the classic Active Time Battle system, with player characters and enemies taking turns to execute actions. Lann and Reynn are the only two human characters, with captured Mirages, monsters based on Final Fantasy classic creatures, making up the rest of the party. Unlike other games, to bring additional party members into battle players will have to "stack" them, effectively creating two different characters whose stats, abilities and elemental affinities are the combination of Lann's, Reynn's and the two stacked monsters'. Depending on the situation, it's possible to undo the stacks in battle, with the three characters getting the ability to act independently from one another. The stacking mechanics are possibly one of the most interesting gameplay systems of World of Final Fantasy, as they leaves plenty of customization possibilities.

Mirages are obviously a big part of the World of Final Fantasy gameplay mechanics. At first glance, these mechanics might seem like a Pokemon rip-off, but it's actually more of a mix between the Pokemon and modern Shin Megami Tensei mechanics. To capture a Mirage in battle, players not only require an empty prism of the corresponding type but also to put the Mirage in the Prismtunity state, which is inflicted by doing specific battle actions such as dealing physical damage, healing, inflicting status ailments, defeat all the other Mirages first and more. Once captured, players can choose to bring the Mirage along or send it to the Mirage Case, which can be accessed at save points and Gates leading back to Nine Hills Town. Mirages all come with unique abilities, which are unlocked with the Mirage Boards (a Final Fantasy X's Grid Sphere-like system that players have the chance to mix and match to create powerful combinations).

Accessing upgraded spells and combination abilities requires players to stack the right monsters with the right abilities, so expect to switch up Mirages pretty often during the course of the game. Since the game's battle system comes with an elemental weakness system reminiscent of recent Shin Megami Tensei games, which allows players to restore additional APs, used to unleash spells and abilities, each turn, it's important to always have access to the right elemental attacks. The stacking system is made more interesting by the limitations that players have to go around to create the perfect stack, as Mirages come with three different size classes - small, medium and large -, which dictate where they can be placed in a stack. Lann and Reynn and considered in the large class when in Jiant form and medium when in Lilikin form, the cutesy form of all Grymoire inhabitants. It's possible to save four different stacks, centered around the Jiant and Lilikin forms, so there's plenty of fun stacking to do. Everything considered, there's some very good synergy between the different gameplay mechanics so nothing truly feels superfluous.

Despite these very interesting mechanics, battles in World of Final Fantasy are a bit hit and miss. Most random battles aren't all that interesting, due to the very low difficulty level and the glacial combat pace, with things moving too slowly even at the highest possible battle speed. It's possible to speed everything up by keeping the R1 button pressed, but a much faster pace would have helped immensely. Battles against more powerful Mirages and bosses are definitely more interesting, but having the right elemental attacks makes even them far too easy. Even like this, battling mirages it's definitely fun, just don't expect to be challenged. 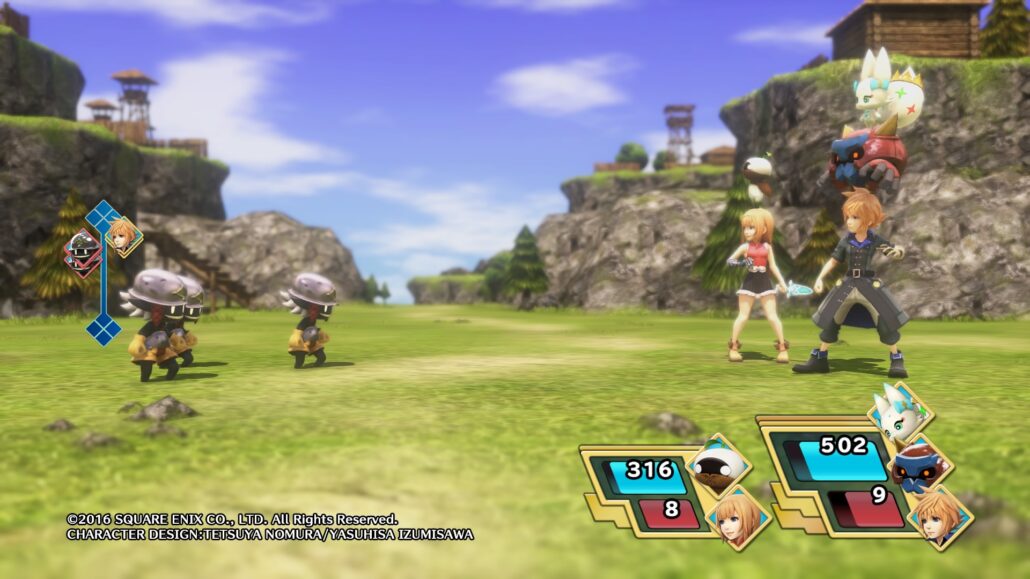 Dungeons exploration is another big part of the World of Final Fantasy experience. For the most part, dungeons have some simple layout which are not difficult to navigate at all, with mini and full maps and objective marker making exploration quite straightforward. There are some very simple puzzles which require players to bring along Mirages with specific abilities, such as the Sizzle ability, or stack them on platforms to activate environmental changes required to proceed. It's difficult to get stuck in dungeons, so those with little JRPG experience will definitely like exploring dungeons. With battles being easy, and dungeons far from complicated, it's pretty clear how World of Final Fantasy is aimed towards a less experienced audience, which isn't a huge problem if one knows about it beforehand.

As already mentioned, the presentation is one of the things that makes World of Final Fantasy such an enjoyable experience. The game's colorful art direction is perfect to represent the lively world of Grymoire, which combines locations from previous Final Fantasy games with some brand new ones. Returning locations manage to evoke even more nostalgia thanks to the beautiful soundtrack, which features rearranged versions of classic tracks. The new tracks are just as good as the returning ones, giving each location a very distinctive feel. Character design is also spot on, with Jiant characters sporting features reminiscent of Kingdom Hearts characters, not surprising, considering they have been designed by Tetsuya Nomura, and Lilikin characters looking adorable, with their big-headed designs retaining all the visual elements that define iconic characters such as Cloud Strife and Squall Leonheart. 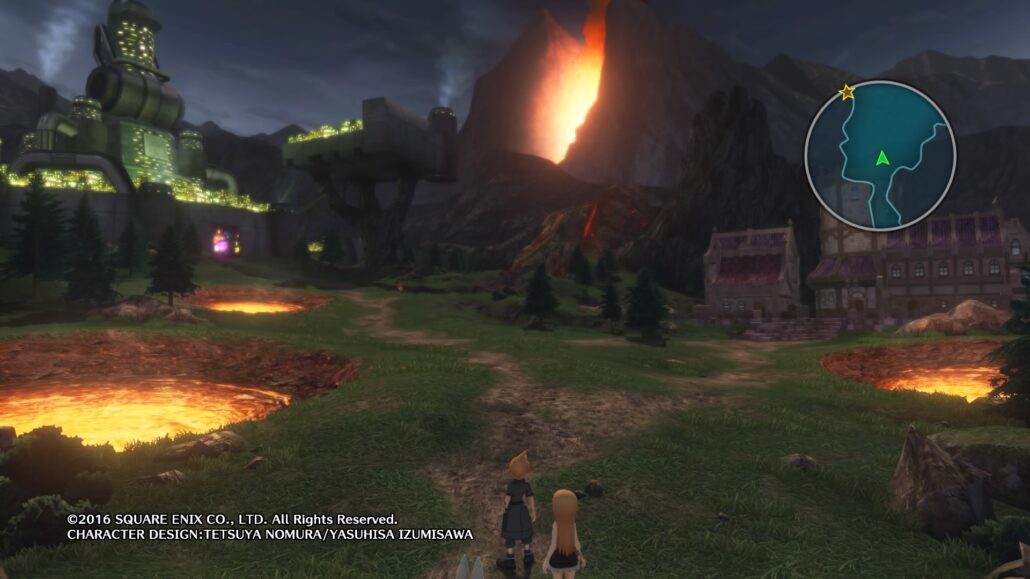 If the Final Fantasy series is all about the familiarity of some of its central elements, World of Final Fantasy is the most "Final Fantasy" game in decades. With an excellent story directing, well-crafted battle system and Mirage mechanics, and beautiful presentation, there is very little to dislike about the game. The story might not break any new ground, the battle system may be a little too slow for someone's taste, and the challenge level too low, but there's no denying that Square Enix succeeded in modernizing the classic JRPG formula with some spot-on choices.

World of Final Fantasy rightly represents the series' 30 years of history, with a classic JRPG gameplay experience modernized by an excellent presentation, very good writing and several well-crafted gameplay mechanics. As the simple dungeon layouts and low difficulty level suggest, the game is mostly aimed towards a younger, less experienced audience, but veterans of the Final Fantasy series shouldn't be put off by this, as the well-implemented fan service more than makes up for it. Highly recommended to all JRPG enthusiasts.