Wonder Boy and the Dragon's Trap

The Wonder Boy/Monster World series from Westone is a unique adventure series that frequently tries to blend some of the Zelda conventions with platforming, depending on which series they’re playing. To make things as confusing as possible, The Dragon’s Trap is a fresh remake based upon a title that was originally known as Wonder Boy III: Monster World II, or Wonder Boy III: The Dragon’s Trap. As the first title to be released by the newly established Parisian studio, Lizardcube, does this remake of a nearly thirty-year-old SEGA adventure stand the test of time? 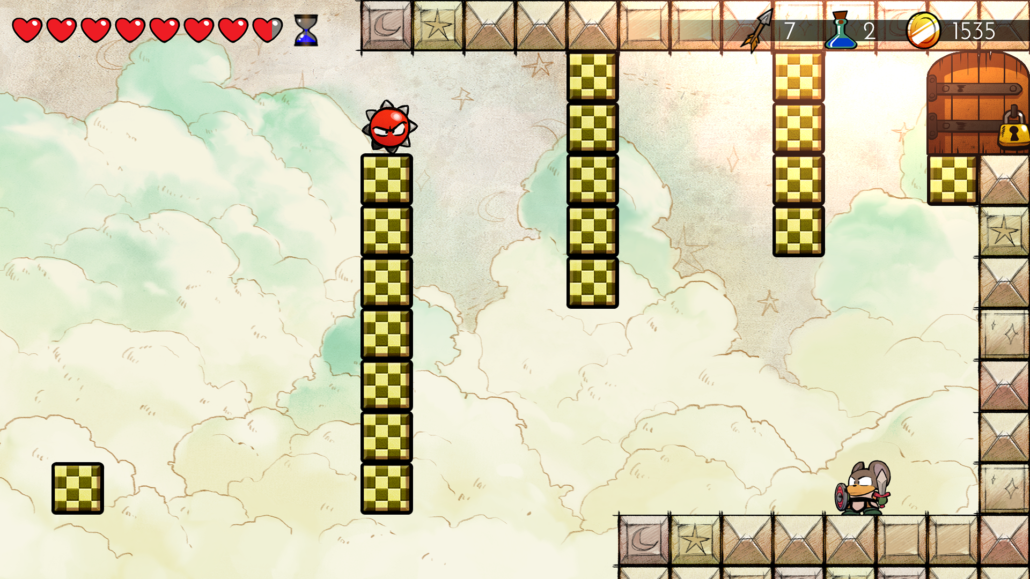 New to the Wonder Boy series proper (not counting the modified releases that came out in Brazil in the early 90’s) is the ability to play through the game as a female character named Hu-Girl, though players won’t step into her boots for very long. Shortly after exploring the Meka-Dragon’s castle, players are cursed into becoming a bipedal animal whose only chance to regaining their human form is a magical artifact known as the Salamander’s Cross.

The first form that players will get most accustomed to is a dragon that gets rid of the sword and shield for a flame breath attack. As players explore the interconnected landscape and earn upgrades to their armory, eventually new areas will lead to entirely new animal forms to be unlocked. Each of Hu-Girl’s unique animal forms each has their own strengths and unique abilities and can be used to unlock new stages to explore, much like earning a new powerup in Metroid. Once a particular form is unlocked, secret rooms throughout the world (there’s one in the starting town if you know where to look) can switch between these forms at will.

Wonder Boy: The Dragon's Trap is what I would consider being the most faithful remaster of a classic game I’ve played to date. The amount of effort to remaster this SMS classic for the new generation harkens back to the then-newly minted release of HALO: Combat Evolved Anniversary from 2011. Both titles received a complete overhaul to both the audio and visuals of their respective games, switchable at the touch of a button. But unlike the big budget Microsoft-exclusive, Wonder Boy retains the same engine that graced the SEGA Master System wholly intact. 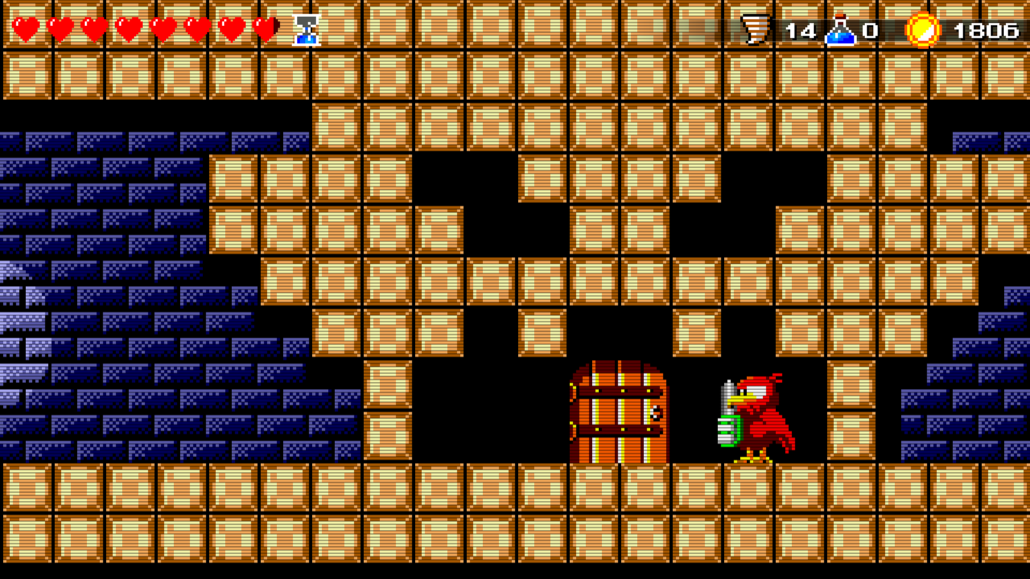 In fact, Dragon’s Trap is so faithful to its predecessor that just about every trick that speedrunners could utilize would work in one version versus the other. Hidden doors and shortcuts are right where the player remembers them from nearly thirty years ago and the same speedrun tactics carry over into this remake for the current generation. Perhaps the only glitch that I could not immediately replicate in the PS4 release was the use of the Hades Armor, which in the original allowed the player to die and be revived over and over as long as they did not swap out to a new armor set.

The new artistic designs created by Lizardcube stand out as phenomenal examples of how to restore a retro game to modern standards. Wonder Boy’s new graphic design has the feel of a painting in motion and there are so much style and charm added to even the most minor of details, such as idling animations. If it weren’t for trying to track down some of the secret rooms, I would’ve kept The Dragon’s Trap on the Modern art motif and never looked back. 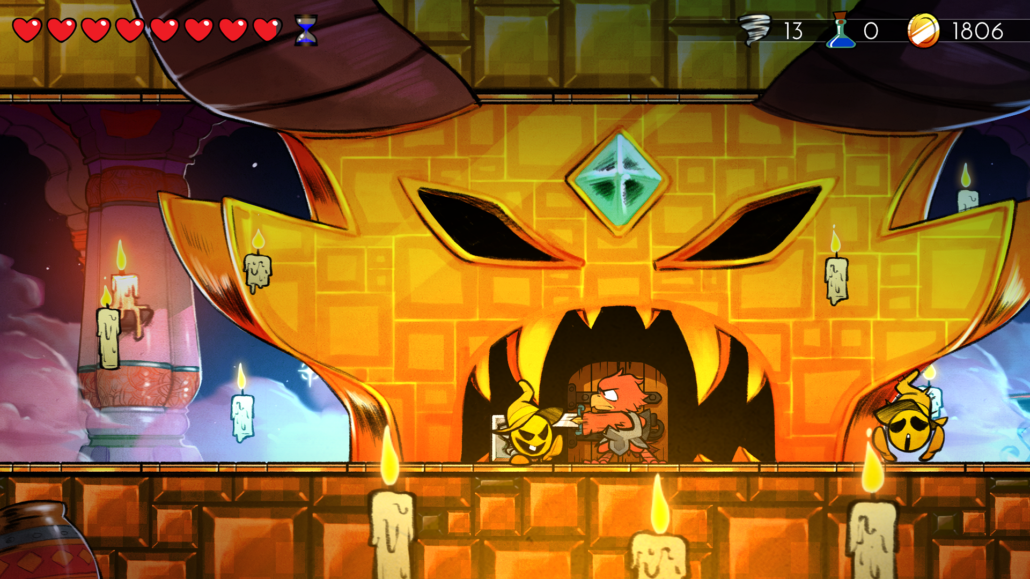 With being a 1:1 replication of the SEGA classic, there are some matters that haven’t aged the most gracefully. Being knocked back by an enemy attack puts the player into a moment of hit stun that can be repeated into a quick death, but the same can apply to enemies all the same. Death can come frequently in Wonder Boy, but the player has little to worry about losing, minus their current stock of sub weapons and their time as they return back to the central hub city after every resurrection. At the same time, a poorly devised Charm System has been stripped from the SMS release, greatly reducing the need for grinding in order to access new upgrades from the shops.

All of The Dragon’s Trap can be enjoyed in the Retro style as well as Modern, with the assets swappable on the fly. The cyan and magenta color palette from the Master System days is still as unappealing to me as it was during my youth as an NES faithful, but after playing hours of the SEGA arcade classics in Yakuza 0, it’s come to grow on me. Most of my time spent trying to regain my Hu-Girl form was spent with the Modern art style, as the fluidity and detail of the animation worked so well to revitalize a nearly thirty-year-old RPG. The developers at Lizardcube surely figured that most players would do the same and even went to great lengths to hide environmental secrets that can only be viewed in the Retro style. For example, the Beach level hides some golden blocks that are normally obscured unless the player brings the graphics back to their basics. 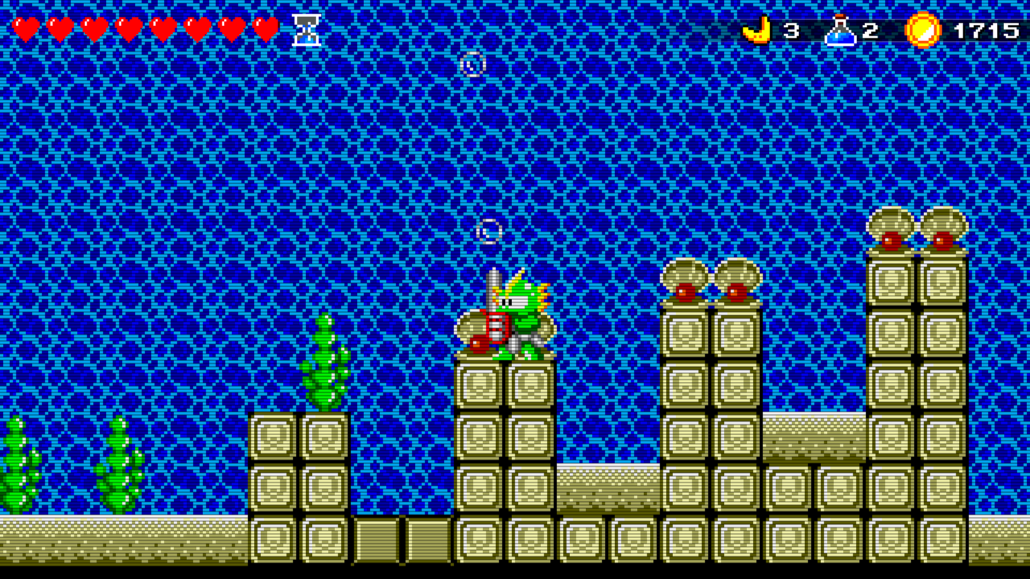 Even if you’re a veteran that has scoured every corner of the Master System release and can speedrun the entire journey in sub-hour time, Lizardcube has thrown in a few extra challenges to turn The Dragon’s Trap into a modern classic. A new Hard Mode adds a new layer of difficulty and challenge to the adventure, with the player taking more damage per hit and a timer that constantly ticking down towards oblivion (well, taking half a heart’s worth of damage). Extra challenge rooms exist for each of Hu-Man’s forms and are hidden away throughout the environment that each requires some creative exploration to discover and the usage of every tool available to their animal form to complete.

Wonder Boy: The Dragon's Trap raises the bar for remasters far above and beyond slapping on a few filters and calling it a day. Given how much I loved Lizardcube’s attention to detail and passion behind this SEGA classic, I would almost beg to see the team tackle my favorite game in the series. If Lizardcube and Dotemu can put the same passion into Wonder Boy V: Monster World III, I could see myself falling in love all over again.

Much more than a fresh coat of paint, Wonder Boy: The Dragon's Trap is a new classic nearly thirty years in the making and truly a project of passion for Lizardcube.