Wolfenstein: Youngblood is a bit of a strange beast. The game comes with a $30 budget price tag attached, and yet, MachineGames (who co-developed with Dishonored creators Arkane Studios) have said it’s the biggest Wolfenstein game they’ve worked on to date. The game also adds co-op play, a new more-open structure, and a number of other features to the mix. So how excited should we be? It sure feels like Bethesda’s marketing department has been toying with fan expectations in an intentional way.

Is Wolfenstein: Youngblood an ambitious full-blooded new experience for series adherents or is it more of a quickie time-filler? Is this another Nazi-blasting epic or the franchise’s first real misfire since MachineGames took over? Lock and load, because it’s time to find out…

QuakeCon 2022 Schedule is Released, and Starfield is Nowhere on It

Wolfenstein: Youngblood winds the series’ timeline forward a good couple decades to 1980. Much of the world has been freed from the Nazis, but they continue to pose a threat from their remaining stronghold in Europe. Our old psychotic pal B.J. Blazkowicz went off in search of something mysterious in Paris and disappeared, so naturally his infectiously feisty twin daughters Jessie (Jess) and Zofia (Soph) decide to infiltrate the heart of Nazi-controlled France to find him. MachineGames’ surprisingly-excellent writing is once again on display in Youngblood, with the game’s opening cutscene perfectly establishing our young protagonists and their connection to their parents in under 10 minutes. And yes, I know the Youngblood trailers have made it seem like Jess and Soph have an obnoxious amount of ‘tude, but remember, these girls are still basically kids. Between the action they giggle, insult each other, talk about boys, and obsess over their favorite cheesy Harry-Potter-esque fantasy series. They grow on you, and the “Hell yeah!” enthusiasm comes off as genuine and understandable, rather than posturing. B.J. raised ‘em right.

Unfortunately, while I like Jess and Soph, they aren’t given the most epic of stories. It kicks off well, but goes slack for a long stretch during the middle portion of the game as you run around doing (deadly) chores in Paris. That said, it does pick up again in the game’s final hours, with at least one nice twist and an intriguing cliffhanger. This doesn’t really feel like a full-scale Wolfenstein story, but it does a pretty good job of setting up whatever comes next.

So, Jess and Soph seem like they’d be alright to hang out with, but how are they to play as? Wolfenstein: Youngblood’s co-op setup mostly works, with players able to host/join online sessions with friends or take advantage of matchmaking. Personally, I never had any connection issues and the game never took more than a minute to find me a partner. You can also play with an AI-controlled sister, and looking at the full spectrum of AI partners throughout gaming history, Youngblood does…alright. Your AI partner rarely lags behind, usually revives you when you need it, and will kill their fair share of Nazis, but they’re fairly useless in any scenario where a bit of strategy is required. Even if you’re the solitary type, you’re going to want to recruit a real human to help you with most of the boss fights.

While co-op is functional, there isn’t a huge amount of depth to it. You’ll occasionally have to pull levers or push buttons at the same time, and you can flash your sister a quick thumbs-up or devil horns “Pep Signal” to restore some health/armor (which is cute), but don’t expect any sort of two-person puzzle solving. There are also some odd oversights, like the fact that the character management menu completely obscures the screen, and yet entering it doesn’t actually pause the game. So, you’re still hearing people running around and bullets whizzing past you as you try to pick a new perk. I get that the co-op nature of Youngblood makes pausing impossible, but they should have designed the menus around that.

Unfortunately, Youngblood’s core action and gunplay also has some issues. Don’t get me wrong, for the most part, this still feels like a modern Wolfenstein game. Fast, aggressive, and pleasingly “gamey” with a steady stream of ammo and health pickups around every corner. Guns still have that satisfying kick and the things they do to the Nazi anatomy are as gloriously gruesome as ever. Visually, the game doesn’t exactly strive for photorealism, but the id Tech 6 engine enables some nice lighting and effects (although no ray tracing just yet) and keeps everything running at a mostly-smooth 60fps on consoles.

So, what’s the issue? Well, Wolfenstein: Youngblood introduces a full RPG-style character upgrade system, which means it also adds something else…enemy life bars. A lot of baddies also sport extra barriers you need to break through with specific types of ammo before you can deplete their main life bar. It’s not uncommon to have to empty multiple full clips into enemies before they go down. Don’t get me wrong, Wolfenstein: Youngblood isn’t Destiny or Anthem, the enemies aren’t that bullet-spongey, but the power fantasy has been curtailed somewhat. Oh, and on the subject of that RPG upgrade system, yes, there are microtransactions in the game, although premium currency can only be used on cosmetics. You could buy XP and in-game currency boosts with real money on the PS4 at launch, but Bethesda removed the option after players complained. Will these boosts quietly return later? We shall see.

As mentioned Arkane Studios lent MachineGames a hand on Wolfenstein: Youngblood, and you can see their influence in the game’s less-linear-than-usual structure. It would be a stretch to call the game “open world,” but after a couple of introductory missions you find yourself in a hub located within the Paris Catacombs, from which you can take on a decently-lengthy list of missions and side missions. This sounds good in theory, but it doesn’t work out that well in practice. Paris is divided into only four neighborhoods, with most missions requiring you to visit two or three of them, meaning there’s a lot of retracing familiar ground. Yes, most missions will eventually take you to places you haven’t been yet, but you’ll end up passing through certain Nazi-filled plazas and back alleys what feels like a dozen times or more.

Also, there’s no sugarcoating it – Youngblood’s checkpoint system downright sucks. Basically, there is no checkpoint system. You and your sister have three shared lives, and if you lose them all, it’s right back to where you started the current mission. This is particularly irritating when tackling the later “Brother Tower” missions. These towers can take over 45 minutes to play through, you need to fight through the streets of Paris for 20 minutes or more just to get to them, and, as the cherry on the sundae, you restart with the amount of ammo you had when you died. So, die on the boss of one of the Brother Towers you’ll a) lose over an hour of progress and b) be stranded in the middle of Paris with no ammo or way to get back to your home base. And no, there’s no going back to a previous save – the game autosaves. It doesn’t feel like MachineGames and Arkane put any thought into this.

Overall, level design just feels a little off in Wolfenstein: Youngblood. There are times when the game really gets rolling and it feels like you’re right back playing The New Order, but all too often the flow is interrupted by weird spikes in difficulty and other issues. The more open sections of the game can be confusing as the game lacks any sort of minimap, forcing you to rely entirely a small radar. I don’t mind a bit of exploration, but running around in circles trying to find the right back alley or manhole to go down isn’t what I play Wolfenstein for. This game continually builds up goodwill, only to squander it.

Wolfenstein: Youngblood can be completed in around 8 to 10 hours, double that if you want to clean up all the sidequests. Considering I’ve played Wolfenstein: The New Order from beginning to end multiple times, I was expecting to at play through all of this game’s content at least once, but once I hit the credits, I kind of felt like I was done. Youngblood gets old surprisingly fast.

This review was based on a PS4 copy of Wolfenstein: Youngblood provided by publisher Bethesda. 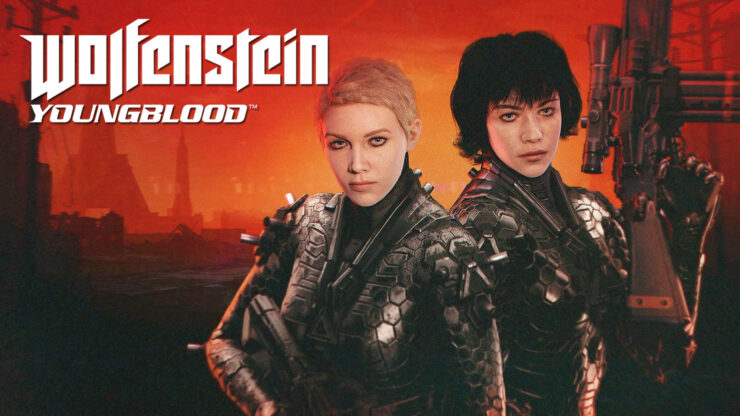 Wolfenstein: Youngblood just never finds the right groove. The game’s needless RPG elements, microtransactions, and sloppy non-linear structure are obvious mistakes, but it also has some surprising basic level design and pacing problems. Wolfenstein: Youngblood can still be good, visceral fun in fits and starts, but overall, the game lacks the maturity of the elder Blazkowicz’ adventures.