Despite not being the first game ever to feature stamina-based combat, the original Dark Souls has become one of the most influential games of the last decade. Many developers offered their own spin on the formula in the past few years, like Team Ninja with Nioh and Deck 13 with The Surge, but they stuck to a formula that is pretty much the same as the one seen in the From Software series.

Unlike these developers, Clock Drive Games took a more experimental approach with Warlander The Serbian developer took the combat mechanics of the From Software series and added their own flair to it, changing the progression system as well with elements taken from roguelikes. The results are quite interesting, though not without flaws.

Warlander stars Bruce, a powerful warrior who awakens at the beginning of the adventure not remembering much of what happened before his awakening, including his clan's name. The Old God of the Forest has brought him back and granted him a sentient sword to exact revenge on those who have destroyed his tribe. Despite being an instrument of revenge, Bruce has his own stakes in the battle against the new God Morven, stakes that will become clearer as the adventure proceeds.

Warlander's story is based upon Celtic mythology and offers an interesting take on the conflict between the old and the new way, with the new God's acolytes, the Techno Forces, representing technological advancements, at the cost of everything else. Most of the game's story is told indirectly through memories collected in stages, which reveal some details on the backstory and the events that are unfolding while Bruce slices and dices his path towards the final confrontation with Morven the Immortal. The story isn't particularly original, but the Celtic mythology tones give it a unique flair.

As mentioned earlier, Warlander takes the Dark Souls stamina-based and challenging combat and adds its own unique twist to it. Like in the series created by From Software, players control Bruce in a third-person perspective as he travels to different areas and takes on a lot of different and powerful enemies. Bruce has a few basic attacks at his disposal: two horizontal attacks, a vertical, heavy attack, and a kick that stuns enemies using shields. His abilities are greatly expanded during the course of the adventure, as the game's vast skill tree features a lot of diverse attacks like a sword throw, a Vine Grab to throw enemies, long-ranged attacks, rush attacks and so on. The variety of special attacks available isn't just for show, as many of them are particularly effective against certain enemies, and they all come with multiple properties.

Depth is the name of the game in Warlander, as pretty much everything at Bruce's disposal can be used in different ways. The Vine Grab can be used to throw enemies against one another, or off a bridge, or against an explosive container to blow it up. Sword Throw has a unique property that makes the sword damage enemies even when going back to Bruce. Long ranged attacks with Stakes are weak, but they serve an extremely important purpose: take the armor off the enemy.

While Warlander plays like Dark Souls on the surface, the similarities end at the stamina management and light, heavy basic attacks. Lacking a lock-on mechanic, players are able to direct their sword slashes in any way they want, not unlike Metal Gear Rising: Reveangeance. And, like the Platinum Games developed games, a well-placed slash can cut limbs and heads. Cutting off arms prevents enemies from attacking, while cutting their legs makes them unable to stand, unlocking the ability to perform a finisher that kills the enemy, regardless of the remaining health.

Do not expect to kill all enemies using the same strategy, though: Techno Forces die instantly when their head is severed, while the Weaponized Corpses do not, so players must adapt to the enemy type. As already mentioned, most Techno Forces enemies come with armor, which must be removed to damage the body part it protects. Enemies hardly come in full armor, so players have the option to either target unprotected limbs or remove the armor with repeated blows. This is easier said than done, as enemies are always on the move, and they do not stagger when attacked, so finding an opening, blocking and dodging attacks creates an exciting battle flow that makes combat extremely satisfying. The enemy variety is extremely good as well, and each enemy type comes with its own traits, requiring a different approach for both offense and defense.

Any hardcore action role-playing game wouldn't be one without big bosses, and Warlander delivers on this front as well. All the bosses come with multiple phases, and require precise dodging, blocking and attack to be defeated. Bosses also represent one of the few aspects of permanent progression in the game, as defeating them allows Bruce to retain for the next playthrough one of the basic techniques that can be learned through the skill tree. This is rather important, as Warlander features permadeath and no way to recover everything that has been learned at the point of defeat.

Warlander progression systems are markedly different from anything we have seen up until today in Souls-like games. Taking a page from roguelikes, Warlander features a procedurally generated adventure presented by different nodes on a rather barren map. Each node may feature an enemy encounter against the Techno Forces, a boss battle, a treasure chest, an upgrade or a healing node. Enemy encounters node can feature one between a few different locations that belong to the general area the players are in, like Clan or Druid Lands. These nodes task players with surviving against multiple waves of enemies, which become more difficult to clear the closer players are to the final node featuring Morven the Immortal. Arenas are quite interactive, featuring bridges, explosive canisters and more that can be used by players to kill enemies. They may sometime include a treasure chest, which gives players the choice between two different bonuses that will stay active until the end of the current run.

Upgrade nodes are the only place where Bruce can upgrade his skills. Skills are learned by spending XP obtained by killing enemies and by using limbs, which act as a sort of currency. Limbs can also be used for healing at the dedicated nodes, so defeating enemies by cutting their limbs first becomes more and more important as the game goes on.

Warlander's gameplay loop is definitely engaging, but the experience is somewhat damaged by the general lack of polish. The interface and menu system are barebones, combat lacks a bit of weight, and the targeting system feels inaccurate, especially when players have to switch between offense and defense against the heavily armored Techno Forces enemies. Hit detection and hitboxes also feel disjointed, as I often got damaged by an unblockable attack that did not visually connect with the character. It's a shame because the game offers a lot of depth, and more polish would have made it a memorable experience. It's still fun, though it becomes annoying to deal with things that shouldn't have been in a game like this. The adventure is also not very long, and once Morven has been defeated for the first time, players likely have seen almost everything the game has to offer. An online multiplayer mode would have done wonders to extend the game's longevity.

Warlander is far from being the best looking game released in recent times. Locations look good, mainly thanks to the comic-book-inspired design, while characters generally look a bit rougher and a little generic, not counting Bruce and the bosses. Animations, sadly, are very stiff and lack refinement like many other features of the game. Optimization is also not that good: the game runs fine at 1080p on a machine featuring an i7-3770 CPU, GTX 980 Ti GPU and 16 GB RAM, but starts struggling at 1440p with ultra and even high settings, with frame rate often dropping in the 40 frames per second range when multiple enemies are on screen, which shouldn't be happening since the game is not demanding at all. Things will likely improve with future updates, but at launch playing the game at 1080p resolution seems to be the way to go unless you've got an extremely powerful system.

Despite the lack of polish, Warlander is an enjoyable experience. Clock Drive Games attempted to twist the Dark Souls formula in several different ways and mostly succeeded, especially for the deep combat and roguelike progression. It could have been much more than what it is, however, so it is difficult to recommend to those who are not die-hard fans of Dark Souls, Nioh, The Surge, and all other Souls-like games. 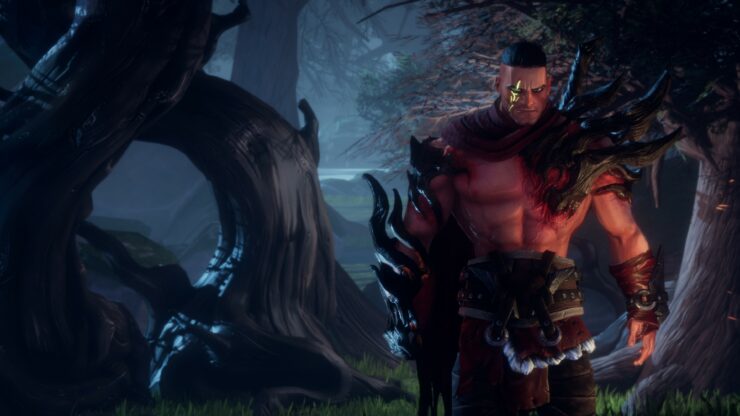 Warlander offers a very interesting spin on the Dark Souls formula, featuring a deep stamina-based combat system featuring limb cutting mechanics, interesting setting and progression mechanics inspired by roguelike games. Sadly, the general lack of polish and low amount of content damage the experience in the end, making Warlander a game that can be recommended only to the most die-hard fans of the Souls series