I am still pleased to see Warhammer represented in video games so regularly and in so many forms. From hardcore tactics titles to new and experimental titles such as Necromunda, the Warhammer brand is keeping things fresh in the console space, and Warhammer: Chaosbane, in that sense, is a bit more traditional. What we have here is an isometric action-RPG looter - yes, basically a Diablo-like - and despite the very uninspired premise, the pace of the game makes it a compelling experience.

In Warhammer: Chaosbane you can choose between one of four characters and journey out on a fairly short but fun campaign that sees you killing thousands upon thousands of monsters. I set out as the Elf wizard and casting out dozens of spells to overwhelm my foes quickly became satisfying. You travel through numerous monster-filled dungeons, across several realms, and then you unleash your full powers while fighting against a big boss. It sounds simple, and it is pretty simple.

Your character archetypes all have the abilities you would expect from these kinds of games - sorcerers stay back and launch all kinds of spells and abilities, while warriors get up close into the fray, and then there's everything in between. The big problem in regards to combat is that once you've found your winning strategy, there won't be much reason to stray from it.

As a wizard I was able to stay back and launch fireballs, blow fire breath, guide burning orbs around my foes - and after just a few hours I'd upgraded all of my spells, making them even more devastating. Once I'd found what I needed to take on hoards of enemies with ease, I felt no need to change, and it neatly carried me to the end of the game, with each stage seeing me round up large mobs of enemies before wiping them all out systematically with my spells. Thanks to my health drain skills each hit healed me, and there were a lot of hits. I could stand in the center of the hoards and just absorb attacks, dealing out far more damage than I'd ever receive - and the only moment this changed was during large boss encounters, and the Bloodlust technique deals with them in mere seconds. As a result, it's fair to say Warhammer: Chaosbane can become a bit too simple, with a friend sitting down at the controller halfway through the campaign, figuring out the buttons as he went, telling me "it's a bit easy, isn't it?"

You can crank up the difficulty for the combat of course, but even though it's easy, it is satisfying, because you built your character to be that way, and the game tempts you into extra challenges in the Tower of Chaos and Boss Rush modes. But once I hit level 50 my patience was gone, and I felt done with the game, something that wouldn't have happened if this game had local multiplayer. Honestly, Diablo-likes with no local multiplayer are insane, you're just throwing away hours of replayability.

And on the Xbox Series consoles, this should've been an easy task. I reviewed this on the Xbox Series S, and the visuals and sound design are on point. The graphics are crisp, and when you see those looming pitfalls and giant caverns in dungeons, the sense of scale is truly impressive - doubly so if you can see platforms you were previously walking on in the background. The whole game hums along at 60FPS with very few drops and feels great to play. This doesn't necessarily feel like a next-gen experience, but on the Xbox Series S playing on a 4K display, this game looks lovely. Again though, shame there wasn't a local co-op option which dropped the framerate perhaps. A shame, but you still can play online with others, if you can convince your friends to buy the game.

What will keep you playing is upgrading those spells and skills as you mash through the enemy hoards because the story isn't all that inspired or interesting, frankly. It begins with a king put into stasis by an assassin, and so you set out to find that assassin and free the king. You meet people along the way, some of them have ulterior motives or betray you, you know the deal, and then at the end, the king is back to normal - spoiler alert. Some of the individual characters and snippets of dialogue shine more than the main story itself, but there's never enough of any character shown - not even your chosen protagonist - to get attached to any of them. A shame, but this is a game that should be played purely for the monster-slaying glory alone.

And to that end, Warhammer: Chaosbane does an excellent job. It really does feel satisfying to slay monsters, it easily remains compelling enough to finish the fairly short campaign, and will tempt you back to try again with another character. It's a shame that there is no local multiplayer for a game like this, but if you're prepared to team up with a few friends online, this could be a great way to kickstart your Xbox Series multiplayer adventures.

Reviewed on Xbox One S (code provided by the publisher). 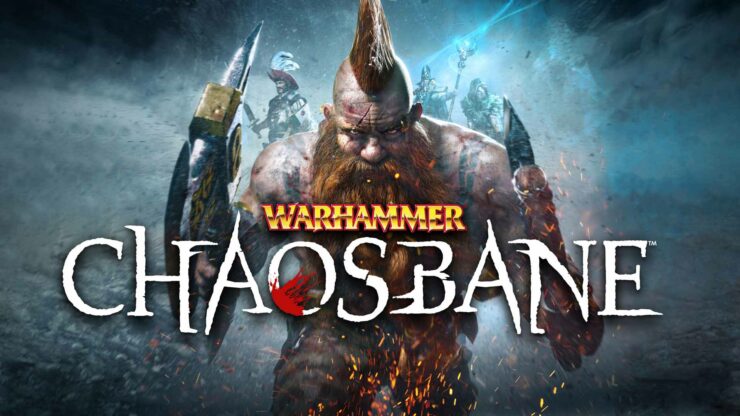 Warhammer: Chaosbane is saved by the monster-slaying action since the narrative isn't much to play for. If you can find friends to play online with this is an excellent adventure, but while solo the repetition may set in a bit too quickly.