Warhammer video games cover a very wide gamut, but given the franchise’s tabletop origins, turn-based strategy adaptations tend to attract special scrutiny. This is certainly true of Warhammer Age of Sigmar: Storm Ground from Canadian developer Gasket Games, as it’s the first major turn-based strategy video game based on Games Workshop’s new-ish fantasy universe that made its debut in 2015. Add some trendy roguelike elements and other modern elements like full crossplay-enabled online multiplayer to the mix, and you have a rather intriguing package.

Of course, the hammer swings both ways. If you’re going to do a Warhammer turn-based strategy game, you’d better deliver the goods. Is Warhammer Age of Sigmar: Storm Ground worthy of a place on your display shelf or is it a bit too paint-by-numbers? Let’s find out… 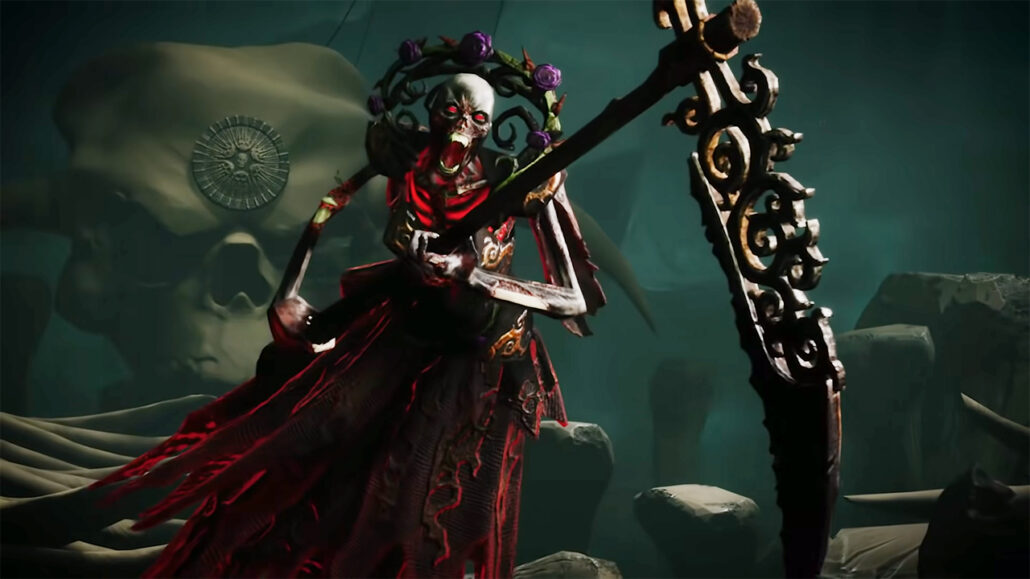 While Warhammer Age of Sigmar: Storm Ground only launches with three factions (the tabletop game already has 25 plus), they cover a pretty wide spectrum. Players can choose between the standard goodie-goodie Stormcast Eternals, the ghastly Nighthaunt, and the downright-disgusting Maggotkin. Storm Ground doesn’t provide the factions with much in the way of unique motivation – they’re fighting because that’s what you do in Warhammer – but it does serve up some interesting lore, some of which is newly-created for the game. Most of the game’s dialogue and lore entries will wash over non-fans like a dorky wave, but hardcore Hammerheads should appreciate it.

Presentation is generally solid, with units being as detailed as you’d hope for, although maps can sometimes be a bit hard to read. Menus and UI is simple and clean, but not always as easy to navigate as it should be. Music is suitably triumphant and voice acting is professional, if sometimes rather silly. Overall, Storm Ground’s level of polish does a pretty good job of separating it from the mass of mobile Warhammer games on the market. 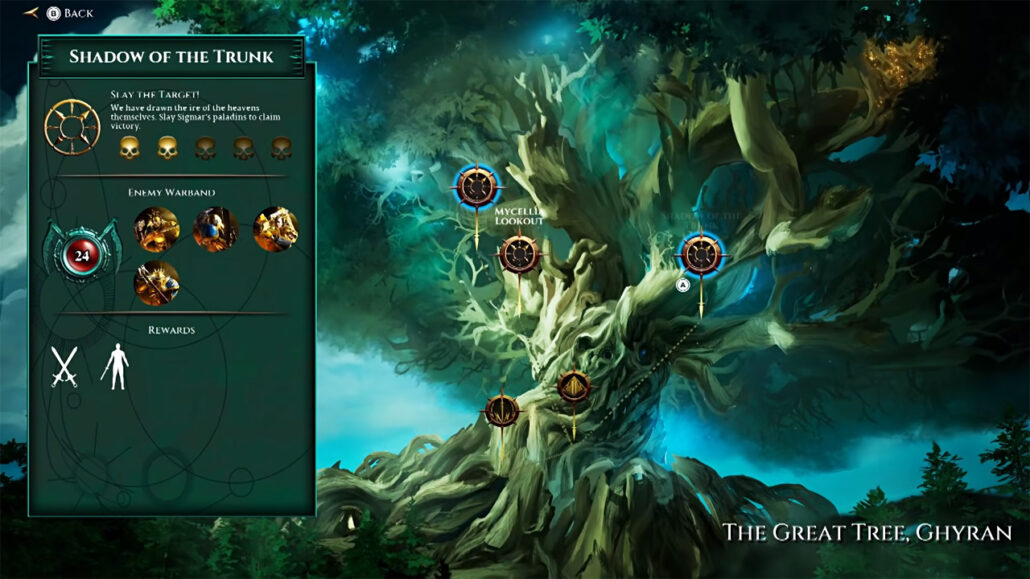 Warhammer Age of Sigmar: Storm Ground’s campaigns follow a familiar roguelike structure, with players proceeding through a series of battles along a branching path. The game provides some info about upcoming missions, including objectives (destroy all enemies, secure a capture point, kill a miniboss, ect.), difficulty, and what rewards to expect, allowing you strategically plot your course. Lose on any mission and it’s back to the beginning of the campaign.

Individual battles are relatively small-scale -- arenas typically only take up a single screen and enemies rarely come in more than two or three waves. Your units have fairly limited movement and if you attack opponents directly, they’re given the chance to hit you with a sometimes-punishing counterattack. Thankfully, you also have a variety of special moves which can be summoned with a limited pool of energy, and whatever energy you don’t use each turn is transformed into Ether, which is used to summon new soldiers to the fight. Your powerful Hero unit will always be the first on the battlefield, but you can typically summon up to four (and sometimes more) support units to your side. 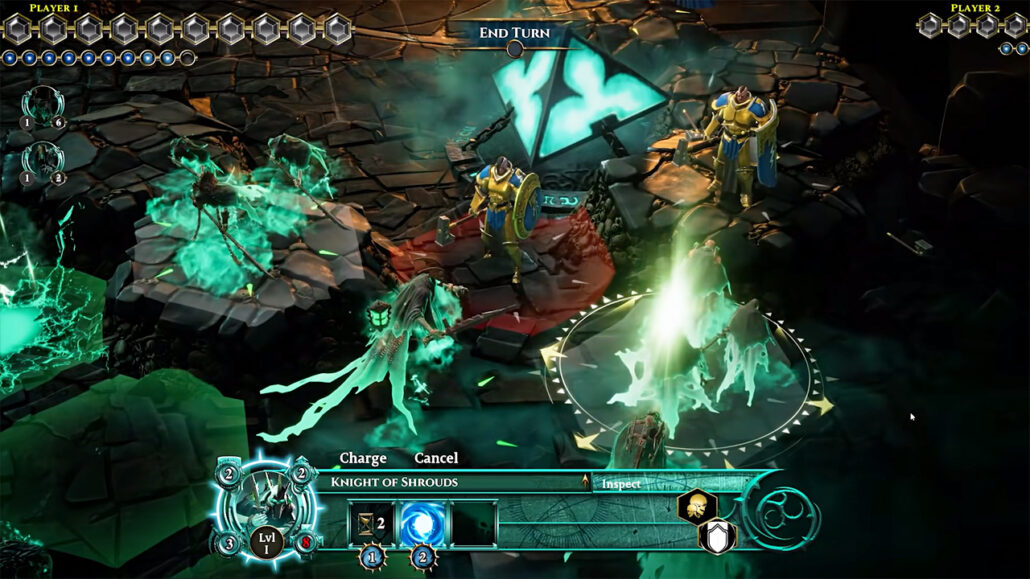 Ultimately, the game’s three factions are primarily defined by how you summon these units. The Stormcast let you spawn allies right next to your Hero, allowing you to keep a tight defensive formation. Nighthaunt units can only be called up at special summoning pyres, but you’re free to place them strategically behind enemy lines. The Maggotkin must be spawned from pools of corruption that require multiple steps to create, but the effort is worth it as the mess they leave behind can inflict various status effect on enemies. Aside from the unique ways you summon units, there’s nothing terribly groundbreaking about Storm Ground’s mechanics, but there’s a good variety of units and skills that can interact in interesting ways. Cast a swirling Spirit Storm then use an attack with knockback to send enemies into its path. Lay a trap, then grapple hapless opponents into it. Due to the small size of the game’s arenas, this is more of a chess-like game of misdirection and sacrifice rather than military-like strategy. 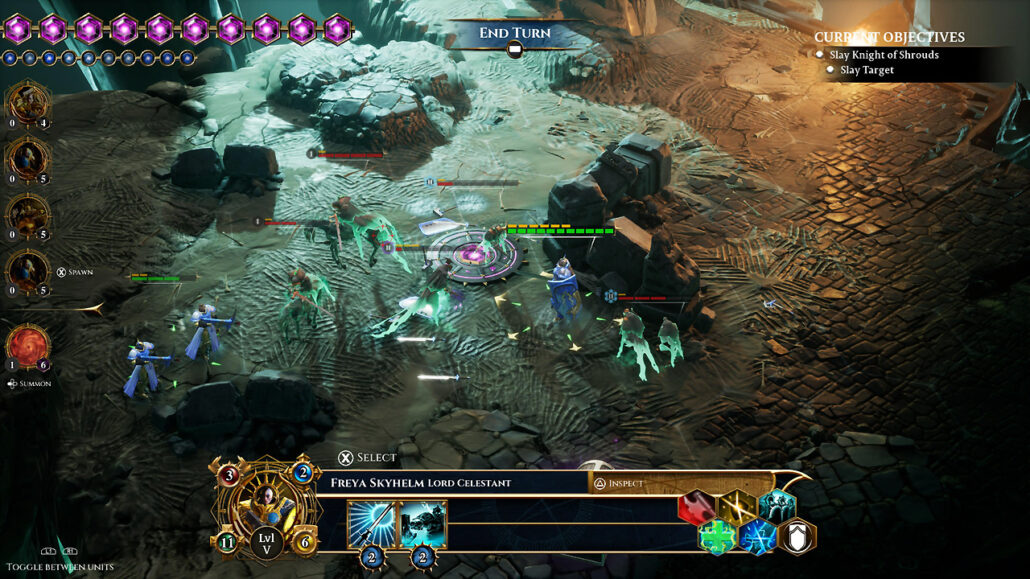 At least ideally it is, as I never found the game’s AI to be particularly clever. It isn’t even dumb in specific, predictable ways – enemy actions just feel kind of random. Of course, this often plays in your favor, and the game is difficult for other reason we’ll soon get to, so I won’t complain too bitterly. Perhaps the true depth of Storm Ground’s mechanics will be revealed once people really start digging into multiplayer. Admittedly, I didn’t get to test it too deeply, but chess is always more fun against a real person.

From battle to battle you power up your warband by levelling up and collecting cards, which are unlocked by completing missions and opening chests. Most things in the game, such as units, weapons, and skills, are represented by cards. If you fail a mission (and you will fail many missions) you’re sent back to the beginning of the campaign with all your cards. While your pool of cards persists and continually expands as you die and retry, only three units (one Hero and two support) and their accompanying gear can be brought forth into a new run, forcing you to be somewhat strategic about what units you build up and how you equip them. Storm Ground does a decent job of making each run feel unique, with a large number of missions to mix and match and unique stories and sidequests emerging based on your choices. That said, as you grind away at a campaign, you will encounter certain battles multiple times. 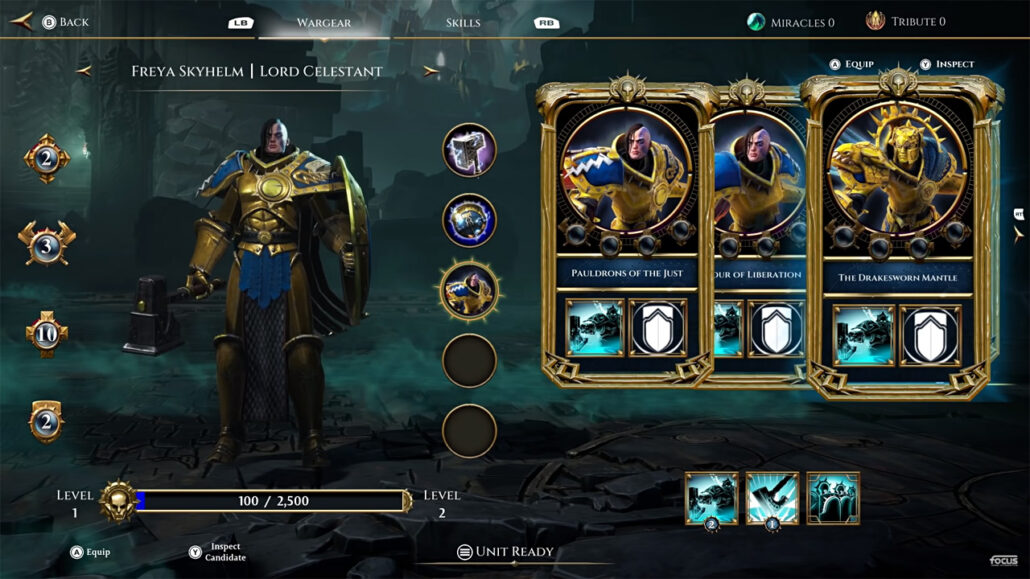 Ultimately, it’s hard to escape the feeling that roguelike elements, as executed here, don’t really enrich Storm Ground’s core strategic gameplay. Roguelike mechanics work in action games and RPGs as a certain amount of repetition and trial and error are expected from those genres, but success in a strategy game should really depend on, well, strategy. Unfortunately, I frequently found myself hitting a brick wall in Storm Ground where it was obvious I simply couldn’t proceed with the resources I had, no matter how clever I was. Eventually, that starts to feel a bit demoralizing in a strategy game. And then, when you do succeed, it kind of feels like you cheated the system by powering yourself up.

Of course, Storm Ground is not the only game to mix turn-based strategy with roguelike elements. Gasket Games have specifically cited the acclaimed Into the Breach as an influence, but that game arguably worked because battles were pared down to the bare essentials. Runs were quick and there was a sense you could succeed through strategy and luck alone. Meanwhile, most Storm Ground runs will take you upwards of 90 minutes and only get longer the deeper into the game you get. Gasket Games have said they expect players to take 10 to 12 hours to complete a single one of the game’s campaigns (personally, I was able to finish them a bit quicker). The grind is core to this game’s design. 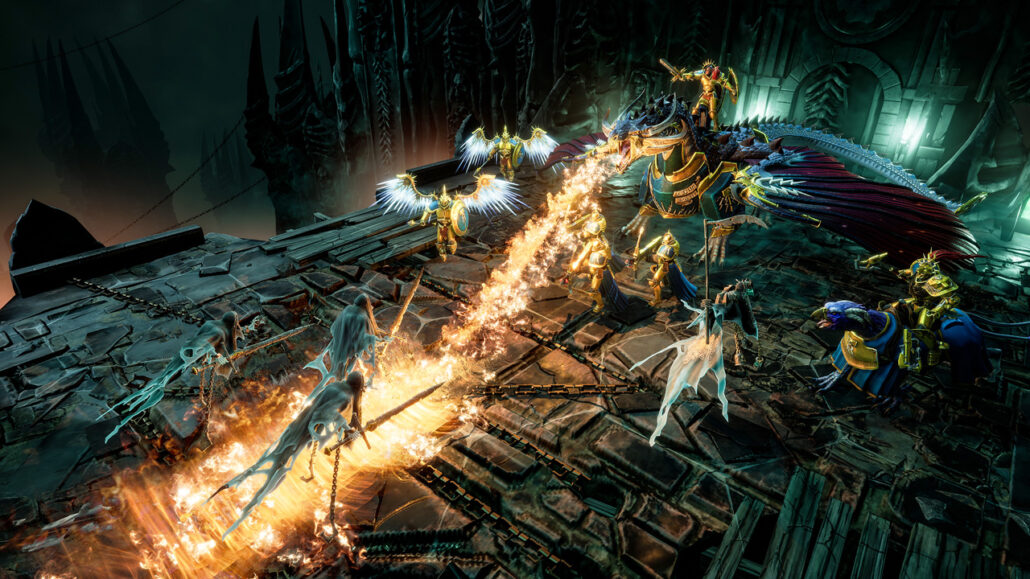 Now, there will be those who enjoy Storm Ground’s repetitive rhythms, and for them, there’s plenty of content to work through. Every faction has their own campaign, and as mentioned, each one may take up to around 10 hours to complete. Each faction’s campaign also has two additional difficulty levels, which are double the length of the initial run-through and add new battles, story, and cool stuff like ridable dragons to keep players enticed. So yeah, this could potentially be a legit 100-hour-plus game, and Gasket Games says they’re planning more content. Unfortunately, some players may find this Warhammer game weighs heavy long before they experience all it has to offer.

This review was based on a PS4 copy of Warhammer Age of Sigmar: Storm Ground, played on PS5, provided by publisher Focus Home Interactive. Early buyers can grab the game at a small discount.

Warhammer Age of Sigmar: Storm Ground is a solid turn-based strategy game that has some fun in its small corner of Games Workshop’s fantasy universe, but it isn’t unique or exciting enough to overcome ill-fitting roguelike mechanics that turn progression into a grind. The game will still appeal to some hardcore fans, and may become a better experience with updates, but for now, this latest Warhammer adaptation is routed by a few bad strategic choices.