When I bought my Oculus Rift S back in November of last year it only took a few rounds of Pistol Whip for me to know that the foam padding on the stock facial interface was about to get destroyed by sweat in a very short amount of time. I had heard of VR Cover from my research into head mount displays before I made my purchase and had seen their covers in use at trade shows so I figured that's where I needed to head. I was a bit disappointed, to say the least when I found they didn't have anything at the time, so I resorted to a silicone cover from Amazon and wasn't thrilled with it. VR Cover has finally released its Silicone Cover and it doesn't even carry a wild premium.

VR Cover's offering of Silicon Covers now include both the Oculus Quest and the Oculus Rift S, both are available directly on their website for $14 each, considering that's only a $2 premium over the Amazon version I bought some time ago I can't complain especially with the quality it brings.

The biggest difference between the two in terms of design is that the Oculus Quest version includes the nose piece and is one big continuous piece while the Rift S is semicircular and retains the use of the original nose piece. 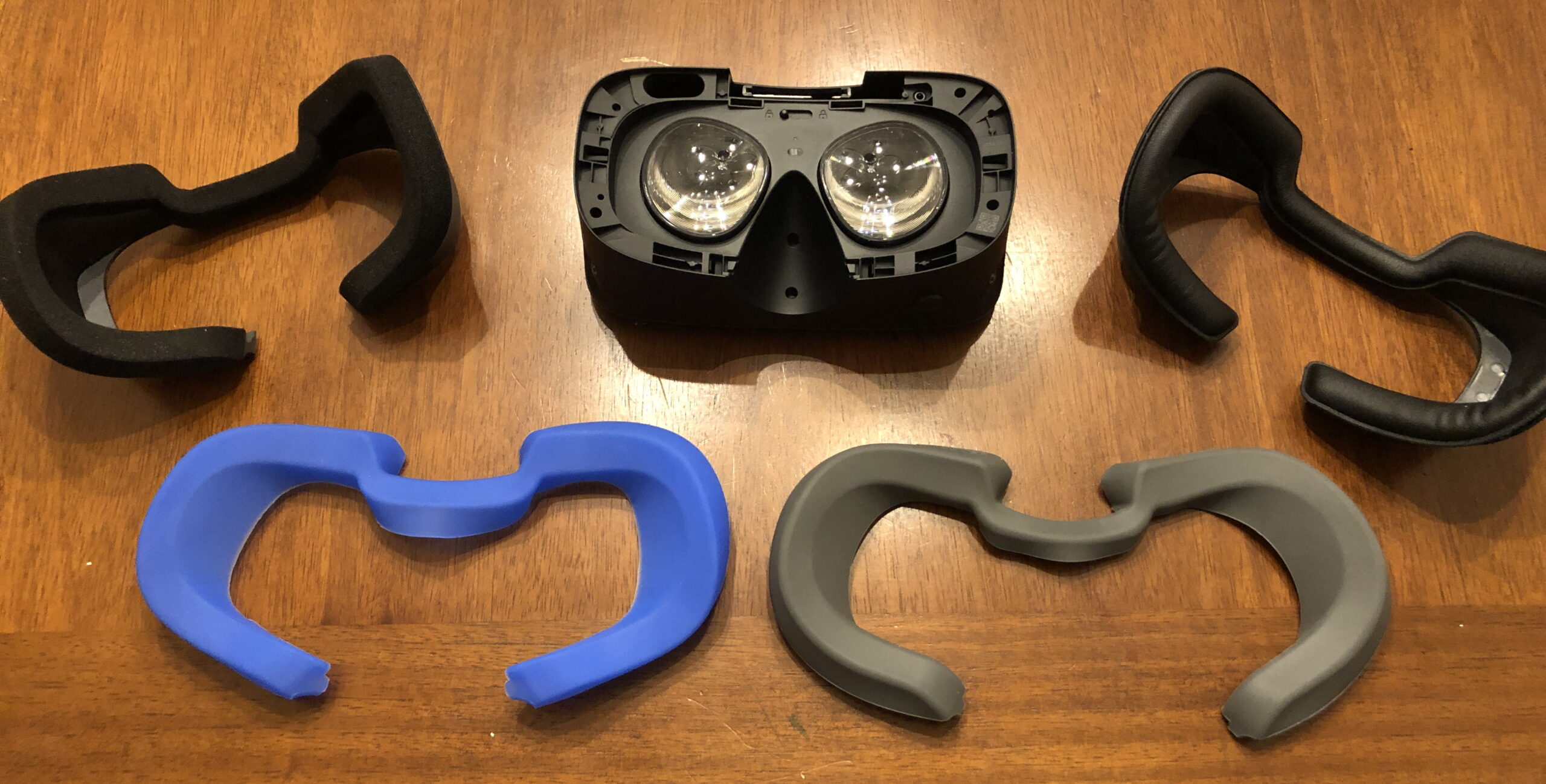 VR Cover sent me the version for the Rift S so that I could compare it to the existing market silicon cover, but I'm also going to compare it a bit to the AMVR facial interface that I picked up not too long after I got the initial silicon cover.

Installation of the VR Cover Silicon Cover on the Rift S was almost insultingly easy. Simply slide it over the existing facial interface foam padding and it rests right into place. You will find it hugs the facial interface quite nicely. The old silicon cover (blue) fit just the same but because of its build quality had a tendency to move about while trying to fit.

For those curious about it compared to something like the AMVR Facial Interface with leather, it's miles easier. Facial interfaces like that require you to remove the stock interface and replace it, which may seem all fine and good but it's simply a good bit more effort than slipping on or swapping out silicone covers.

I touched on the fitment already in the installation portion but I want to reiterate that fitment is excellent for the VR Cover Silicone Cover. Thanks to the increased thickness of the cover, more than twice as dense as the blue version I bought on Amazon, the VR Cover one goes into place and stays in place through gaming sessions. The best thing about it for me was when I took it off, it didn't remain stuck to my face or peel off like a thin piece of cheese. And cleaning the VR Cover Silicone Cover was no easier than any other, just wipe it off and keep rolling, not sure if they could have actually done anything to make that better other than having a way to secure it to the interface like their soft cover does.

Okay, it kicks the pants off the $2 cheaper generic paper-thin silicone cover, but what about the $35+ AMVR Facial Interface kit? The VR Cover Silicon Cover holds its own, but for a very different reason. I got the AMVR kit after being dissatisfied with the Amazon blue silicone cover being so flimsy. The AMVR kit replaces all the foam, including the halo strap with PU Leather, which makes for a nice quality of life upgrade. But, it fails in one area that the stock interface and the VR Cover Silicone Cover excel at, and that's fitment to the face. The AMVR doesn't hug my face like the stock cover does and lets in a lot of light that can be very distracting while playing.

There are quite a few options on the market for those looking to cover up their VR gear, whether it be for ease of cleaning, keeping the original foam intact, or hygienic purposes when sharing VR gear like the Oculus Quest. The final release of the VR Cover Silicone Cover may have taken longer than I would have liked, but they definitely delivered on the quality. My first thought when looking at it through the bag was, "I've used something like this before how is this going to be any different?"

Quality goes a long way, and the price is good too. The one I picked up on Amazon originally was $12, this one is $14, there's no contest. The other thing is I'm fairly certain that had this been on the market when I bought the one I did I would have gotten it instead. That would have saved me buying a $12 flimsy cover then dropping nearly $40 on another set to curb the things I didn't like about that one.  For perspective that added around $50 extra I spent on a $400 HMD, think of it as a 12.5% comfort tax. So if you're a kinetic VR player like myself who refuses to sit down and wants to really cut loose, the VR Cover Silicone Cover will serve you well.

If you're a kinetic VR player like myself who refuses to sit down and wants to really cut loose, the VR Cover Silicone Cover will serve you well.