Flash drives are neither new nor exciting, they’re just something that we use to move a few files around from one computer to the next and generally never given more than a passing thought.  But when Visiontek reached out to us to take a look at their USB 3.0 Pocket SSD we were somewhat intrigued.  So Visiontek sent over the 128gb model for us to beat up on, let’s see how that turned out.

The packaging is unexceptional, being just a clear blister pack showing the PocketSSD through the front as well the basics specs on the back, listed here;

Something of note here is that, unlike most flash drives, the Pocket SSD actually contains MLC NAND flash to give it even better performance over a typical thumb drive and is seen by the computer as a SCSI device giving you the ability to safely remove via the same method with a flash drive.  Being a USB 3.0 device does not limit it’s functionality it works through USB 2.0 and 3.1 as well.

The build of the unit itself is rather nice being made of “aircraft-grade aluminum” it is both weighty and solid.  The included dust cap for the USB 3.0 connector was welcome, but we wish there was a way to have it tethered to the drive so as not to be easily lost.

Visiontek claims up to 450MB/s Read and up to 150MB/s write.  These are some really impressive numbers for removable storage, but it’s time to put those claims to test.  We hooked the Pocket SSD into one of the rear USB 3.0 headers on our test bench’s motherboard, let’s see how it fared. 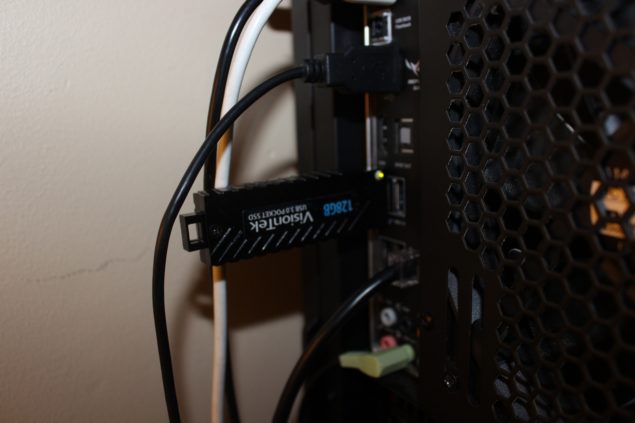 For comparative purposes our Crucial MX100 SSD will be shown in all of the benchmarks.

First up on the chopping block is the ever present Crystal Disk Mark 5.  On the left is the Visiontek Pocket SSD and the right is our OS SSD, the Crucial MX100.  According to the Sequential read/write test Visiontek were spot on with their claim, slightly lower on the Read, but slightly higher results on the write.

Samsung Magician Benchmark shows things in a slightly different light for the Pocket SSD.  We are still seeing the Sequential Writes at over 150MB/s, but the Sequential Read’s at only 224MB/s. 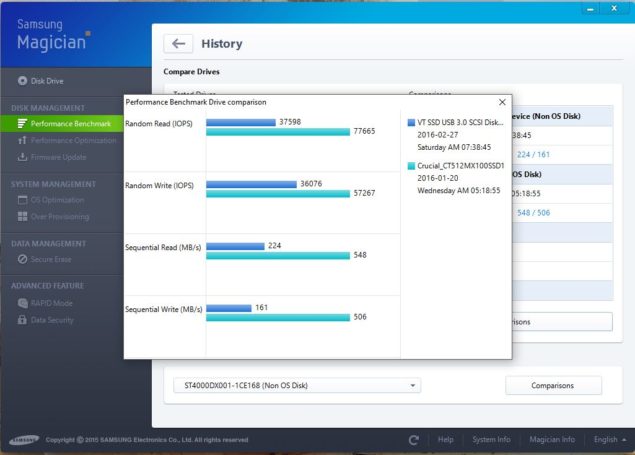 But let’s see where our last benchmark leaves us.

For our last run we used the AS SSD Benchmark found on HWBot.  For those who aren’t familiar with that here’s what the publisher had to say:

“Test the sequential or random read/write performance without using the cache. AS SSD Benchmark reads/writes a 1 GByte file as well as randomly chosen 4K blocks. Additionally, it performs the tests using 1 or 64 threads and it determines the SSD's access time.

Two extra benchmark tests examine the drive's behaviour when (1) copying a few big files, a lot of small files and a mixture of file sizes by using cached copy functions of your OS as well as (2) reading/writing data depending on the data's compressibility.”

Keep in mind that the Crucial SSD is on the left this time and the Visiontek Pocket SSD is on the right.  These results are more in line with the ones from CrystalDiskMark and what Visiontek is claiming.

Transfer Speed? It’s fast, we found it transferred the entire folder for Battlefield 4 Premium in under 15 minutes and stayed about 100MB/s transfer rate.  And during our earlier testing of Ashes of the Singularity we had Steam and the game installed on the Pocket SSD so that we didn’t worry with transferring files and used it as a secondary storage device. 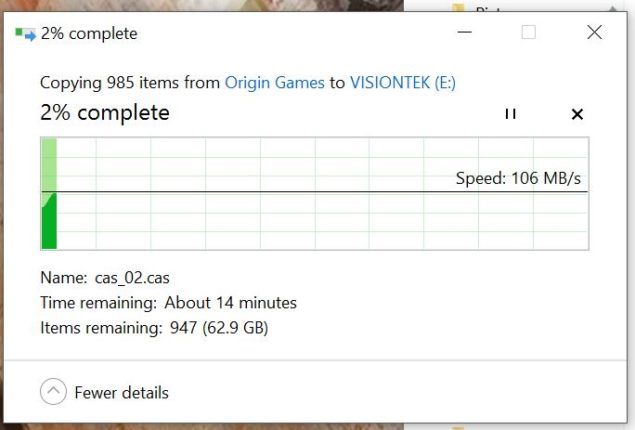 Is it good? Yes.  Is it Expensive? Yes.  The Pocket SSD’s aren’t inexpensive by any means.  For what the 128gb model costs you could easily purchase a 240gb SSD for internal storage.  But, that doesn’t give you the flexibility that the portable Pocket SSD does.  It’s quite literally pocket sized. No additional cables, no bulky enclosure or additional power connectors to carry about with you.  You simply get a large amount of fast, easy to access storage.  I find, for me, it makes an excellent scratch disk for editing videos.  Other than the cost, there is one major drawback.  If you’re hoping to use this as a bootable drive be warned that Windows 10 will not allow you to do so.  But if a small portable drive that’s lightning fast is what you’re looking for and you’re willing to spend a little to get it, then this Pocket SSD might be something you should look at.