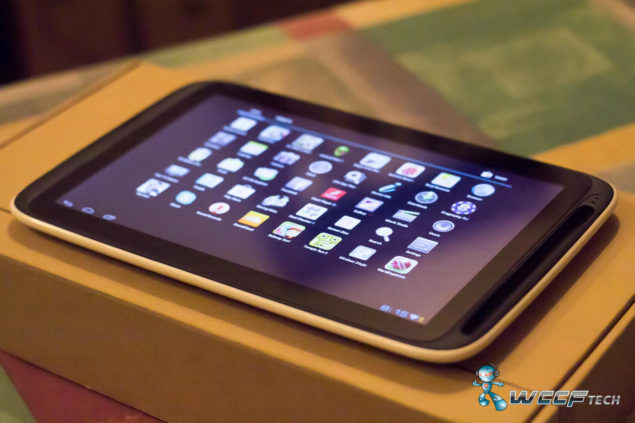 VIPER has been a company based in Pakistan catering to the needs of many consumers consisting both of individual and business users in terms of computers and need based solutions from client to client. Right now seeing the latest boom in the tablet sector, VIPER takes its steps to introduce their own Intel Atom powered android tablet in the market that is set to make heads roll with their new Z10 tablet.

Video: Yes, VGA on both 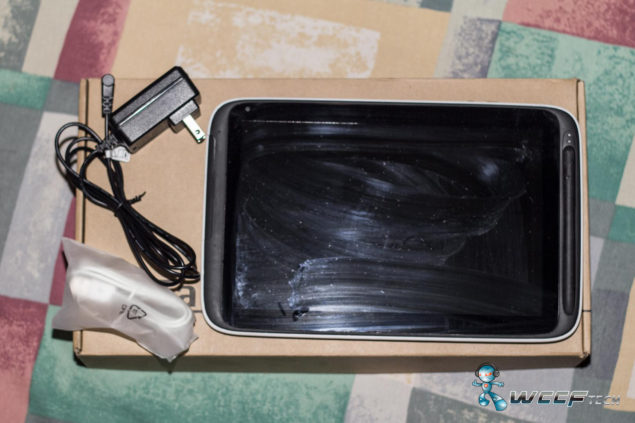 The box consisted of very basic and simple packaging. The box comes with the tablet itself, a Micro USB cable and a wall socket charger.

Talking about the design of the Viper Z10, its fairly light weight in comparison with any standard iPad and almost the same in terms of thickness. Build has been kept sturdy overall as it can withstand drops of up to 50 cm without receiving any damage (cosmetic wise you might end up with a few scratches on the hard plastic body). 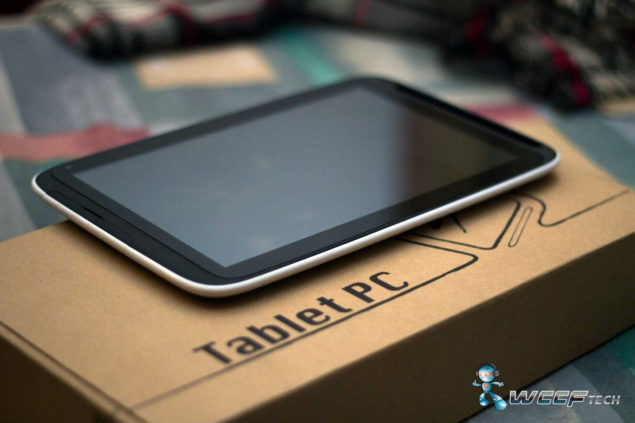 The overall button layout on the Z10 seems to be ill placed for its size. The volume rocker, instead of the side has been placed on top for use in landscape mode as well as the lockscreen/power button has been placed on the same horizon as well which, in terms of ergonomics isn’t comfortable at all. 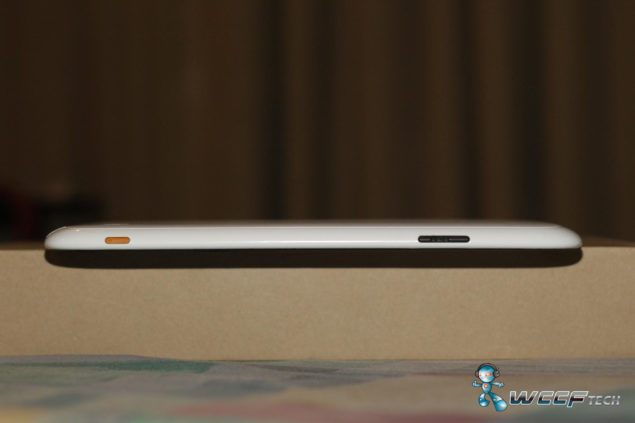 They have though on the left side, hidden the microSD card jacket and other input sockets under a plastic cover that is a part of the grip itself and it might seem a bit frustrating to those people with wet hands for the latch to open up and lose their stable grip from that end. 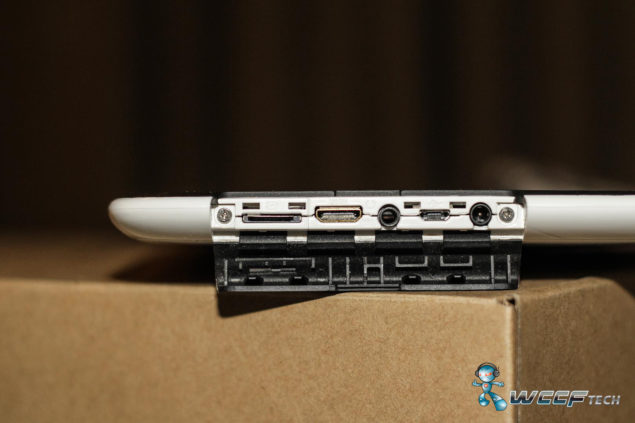 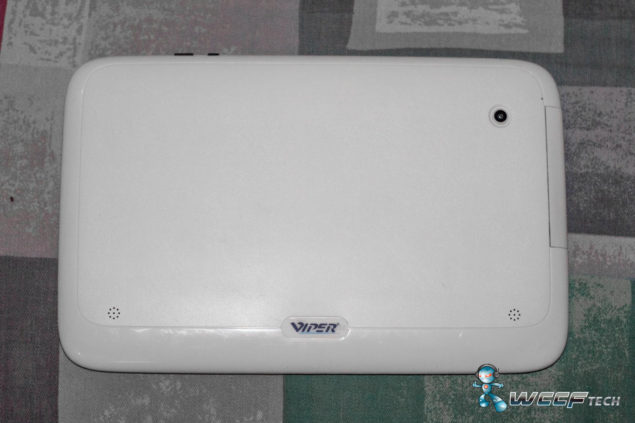 On the rear, there are two speakers which, rather facing towards you, direct the sound towards the people that might be in front of you. The back also sports a rear 2MP camera and unlike many tablets on the market, this variant does not come with any flash. 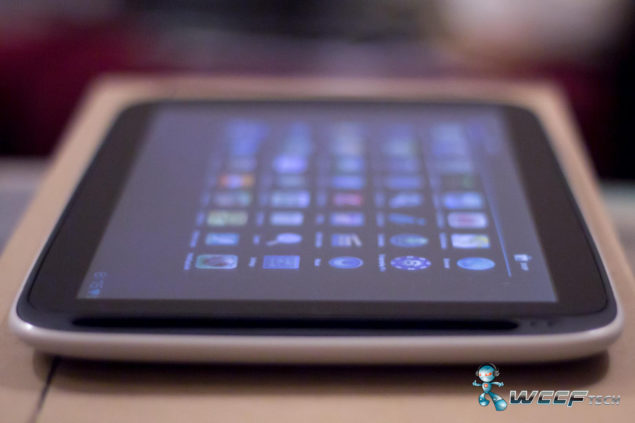 Size wise, this is a 10 inch widescreen LCD with a resolution of 1280 X 800 pixels and 1080p video playback. But there’s a downside to the story as well. You would find any display to be vivid and sharp in color in the case it comes with a high pixel-per-inch (PPI) density. Now normally, all the latest generation tablets on the market have been shipping with a PPI of at least 200+ whereas a tablet of this mammoth size has a mere 150 PPI which would seem to be quite a disappointment for those for expecting the VIPER Z10 to be eye candy material.

For where it loses ground, the Z10 makes up with its speed thanks to its Intel Atom powered processor. The Atom Medfield Z2640 chip idles at 600 MHz and goes up to 1600 MHz under normal operation. Couple this with the onboard 1 GB of DDR2 ram and you are sure to have an excellent gaming experience.

I had ran AnTuTu Benchmark v3.3 on the device with it achieving a score of 10559; that’s faster than an Asus Transformer Prime AND is a deal breaker when you compare the pricing on both devices.

Gaming performance wise, the PowerVR SGX 540 with the Intel CPU is able to give out quite a decent frame rate maintaining an above average for 37-45 FPS per app.

The Z10 itself comes stock with 16 GB storage (12 GB useable) which is quite enough for the average tablet user out there OR if you’d like, you can add an additional of up to 32 GB of storage via it’s microSD slot.

Besides that, the Z10 has a 3.5 mm jack, WiFi, Bluetooth 2.0, a mini HDMI out, and a micro USB jack for data transfers or hooking up an OTG cable.

The Li-Ion 6600 mAh battery to be exact isn’t any joke when it comes to battery life. On a full charge, I had used the Z10 for my university notes, gaming, web browsing, movie watching and music streaming over WiFi given 1 hour each every day and still had 18% battery left by the end of the week. So roughly, the Z10 has one of the best battery times in its class and is one of what I would like to call a key feature for its sales among the masses.

The tablet comes with the stock Android 4.0.4 Ice Cream Sandwich as stock. But there are issues. First off, Play Store DOES NOT come preinstalled with the tablet and if you try installing Play Store off the web, it will simply keep on force closing. Therefore I had to install a third party app store called 1mobile market that is almost exactly the same as Play Store with the exception of requiring a Google ID to use.

Besides that, the rom isn’t exactly stable enough as it has a tendency of crashing apps from time to time or force closing them altogether.

In terms of camera quality, there isn’t much to appreciate about it. The quality is just okay and bearable if you plan to Skype with video with a friend or plan to Instagram pictures (with their filters making most of the high image noise seem as art itself).

Video recording is at 480p and is mediocre as well whereas the tablet can handle playback of upto 1080p.

The VIPER Z10 does indeed come with both good and not so good features yet for its package you’re getting excellent battery life, a fast dual core processor that gets things done faster than its competitors (take the ASUS Transformer as a hint).