I really wanted to make some sort of pun. You know, "you're so vane, you probably think this review is about you." Something cheesy like that. But I can't make jokes and besides, Vane makes me sad. It's such a struggle to come up with constructive, concise criticism when it's such a miserable game to play. Not because the themes are sad, no. It's just because playing it will make anyone sad.

The game kicks off with a bombastic and promising opening. A town of sorts being ripped apart by a violent storm, with the angular, low-poly aesthetic of the environment being torn away, polygon by polygon. It's visually very nice and exciting, though the frequent frame drops caused by lightning strikes hints at a larger problem the game has.

Eventually, the storm tears the town asunder and the game shows its title. Vane. You sit next to the logo on a tree. Oh, you're a crow now, I guess. Or a raven. You're a dark bird. You might be wondering - thus far, this review reads like a play-by-play of the start of the game. Why is that? Well, because there's not much to talk about, frankly.

The bulk of the game from this point forward is you flying around as a bird, finding wind vanes to land upon, where you will squawk and make noise until the wind vane catches the wind. For the record, as far as concepts go, I think this is fine. I really like the idea of exploring a world freely, literally taking to the sky as I see fit. Heck, when I got a flying mech in Xenoblade Chronicles X, it's pretty much all I did for the remainder of the game.

Here though there are so many issues with just flying that I can't even begin to describe them all. First, it just feels bad to fly. You flap your wings for speed. You flap your wings to fly upwards. But what if you just want to ascend a bit, without flying forwards? There's a brake for slowing down and landing on things, but it's finicky and doesn't always want to behave the way you want. Not helping the situation is a third person camera that pans in and out as it pleases, often making the distance between yourself and objects hard to judge.

In addition to that, simple actions such as swooping downwards and flying under a rock formation are just difficult to pull off. It's as if the joy of flight you're being given is somehow a punishment. Never before have I so disliked flying in a game. What should be so freeing and liberating is just a frustration.

But you don't always play as a bird. In certain areas, you can play as a child. Magical wellsprings of, erm, some sort of magic are in the world and flying into them as the crow will have you come out the other side as a child. This child can therefore solve puzzles and do a bit of platforming. Both are awful.

Platforming and jumping feel sticky as if your character is stuck to the floor. Pushing physics-based objects feels weighty but incredibly imprecise and frustrating, something the devs were aware of because many important objects in the world that can be moved are fixed on an axis, so you can't ruin progress for yourself. But there are a dozen more problems to be found here.

Believe me, I don't like just listing off issues with a game, but that's what this game has done to me. If you fall off a high ledge as the child, which is likely to happen a few times, you'll turn back into the bird. To transform back, you have to go back to that magical spring again. That's frustrating. Many locations in the world look like they're built for you to be able to traverse as the child, but that's not really true. And the level design in Vane is just awful because there's no way for you to be able to understand where you should go as the child, where you should go as the bird, where you can find a spring or even the next bloody wind vane. Just progressing through the game feels punishing.

In a darkened cave as the boy, I could see literally nothing. I got lost, plodding along slowly as the stupid child. I fell off a ledge. Turned into the bird. Hated having to fly again. Such wide floors to walk upon in the cave, completely empty, devoid of anything to see or do. It's just… nothing.

And that's all without mentioning the damn bugs. You can get bugged while flying. You can get bugged as the child. Your camera can frequently clip through walls. You can clip through walls. And in one instance, I couldn't caw as the bird, meaning I couldn't activate a wind vane. I was stuck on it, mashing triangle, unable to do anything. I had to restart. The game took me back to the beginning. Back. To. The. Beginning.

And what's worse, it seems like there were ideas for what kind of game this should be, but they just dropped it all. Like, a linear cave section I mentioned leads to a beautiful pond outside with a wind vane in clear view. It's like the game was designed so I went into the cave and emerged here. After having to restart, I realised there was nothing in the cave for me other than an achievement I found, and the wind vane at the end can be reached just by flying around the cave. So I did. I just flew around. A profoundly pointless exercise.

There's no reward here. Nothing to feel good about. Heck, even the environments aren't that interesting to look at. This game is bad. It's just, bad. It's the concept of Journey, the visuals of Rime but washed out, and the controls of The Last Guardian, but the positives of none of those games. It is a pretender. No original ideas, no grand concept, just borrowed features from games far better than it.

Okay. That was harsh. If I'm to give it a positive, it's that some of the sights and views are nice. Truly, nice. That's about it. Vane is not worth your money, not worth your time, and just… don't. 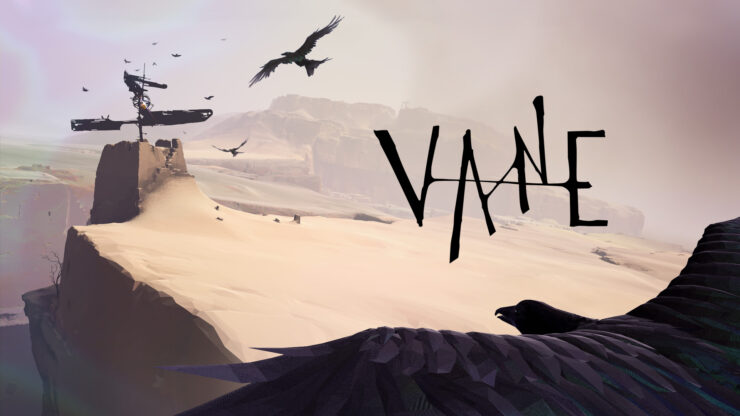 There is nothing about Vane that redeems it. This review reads like a list of complaints instead of constructive criticism because there isn't even anything to be constructive about. It's a game that's a challenge to play simply because it challenges your patience.