Many of our US readers may not have heard of V-Color but the company was established in 2006 by a team of experts, specializing in DRAM module testing. V-Color's primary based on operations is situated in Taipei, Taiwan but their products are available across the globe. The company has a primary focus in the DRAM and Flash product markets, with their lead products more often being memory kits and SSDs.

While V-Color offers several DD4 memory kits, their flagship product for 2019 was the PRISM II RGB series which is an upgrade to their original PRISM RGB series modules. The company has moved to a more aggressively priced solution that is pitted against other RGB kits but at a much better value proposition. V-Color sent me their latest PRISM II RGB series DDR4 memory kit (16 GB @ 3600 MHz) for this review.

The V-Color PRISM II RGB 16 GB DDR4 memory kit is designed to offer pure value and as such, this RGB emblazed kit can be found for $88.99 US which is comparatively cheaper to other RGB DDR4 kits in the market. The kit we received is optimized at a clock speed of 3600 MHz. The memory kit consists of dual 8 GB DIMMs which make up a total of 16 GB in capacity. Some main features of the V-Color PRISM II RGB DDR4 series are listed below: 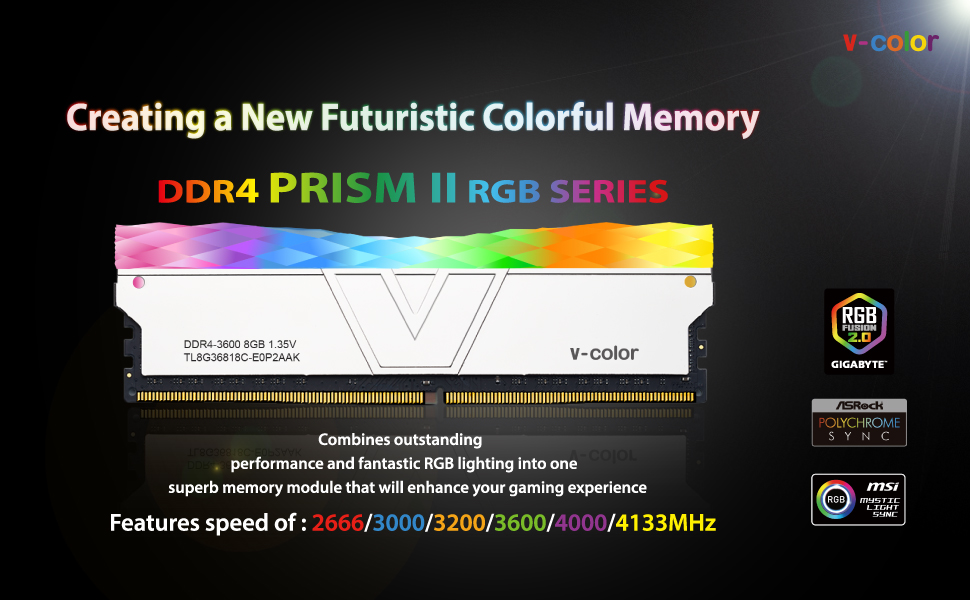 The memory kit has a tested latency spec of CL18 and the timings are 18-22-22-42 for this specific kit. The voltage set at reference is 1.35V and the memory kit comes in an unbuffered package with non-ECC (Error Correction) design. The memory kit is fully compliant with Intel's XMP 2.0 and can be easily set to its rated clock speeds through the BIOS shipped on the latest Intel motherboards. 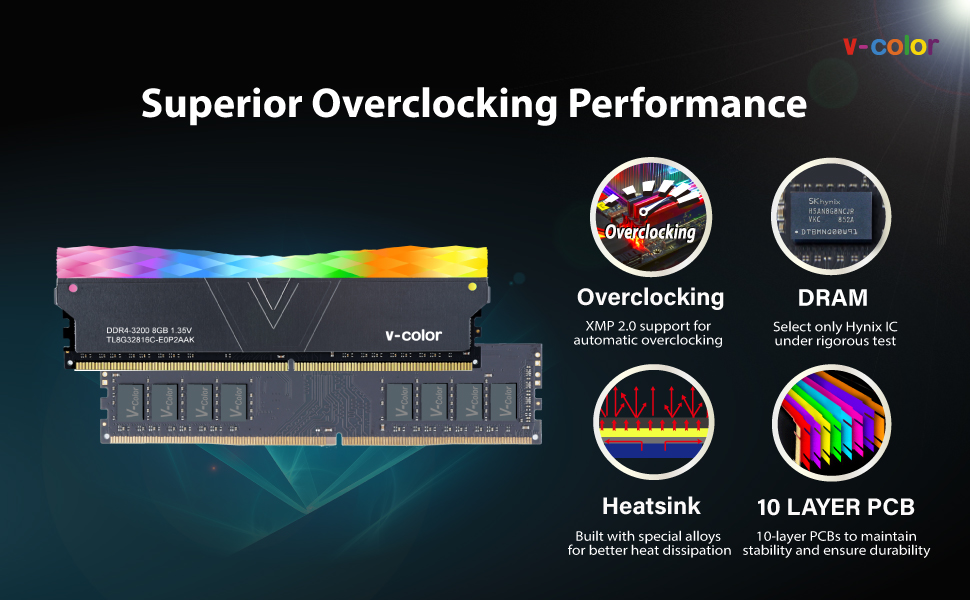 The V-Color PRISM II RGB series memory kit comes in a rectangular cardboard package. The box is colored black but the text is in different colors which is part of the whole V-Color aesthetic Front of the box lists down the V-Color and PRISM II brandings along with RGB, 16 GB logos and a text that mentions V-Color's Taiwanese webpage. 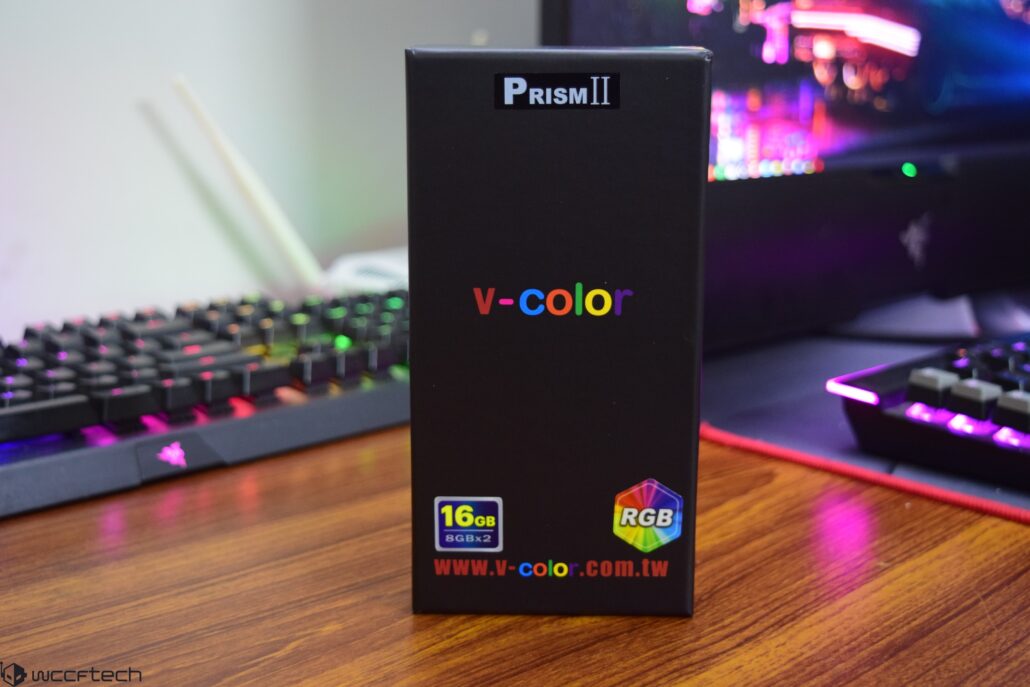 The back of the box lists down brief specifications of the PRISM II DDR4 memory kit along with the detailed procedure of how the modules are tests and selected by V-Color for this particular kit. The package also includes a fiber cloth that you can use to clean the reflective surface of the heatsink which can easily catch fingerprints.

Inside the box, both modules are held firmly between a plastic container which has the marketing logos featured on it too. The memory modules are featured adjacent to one another. 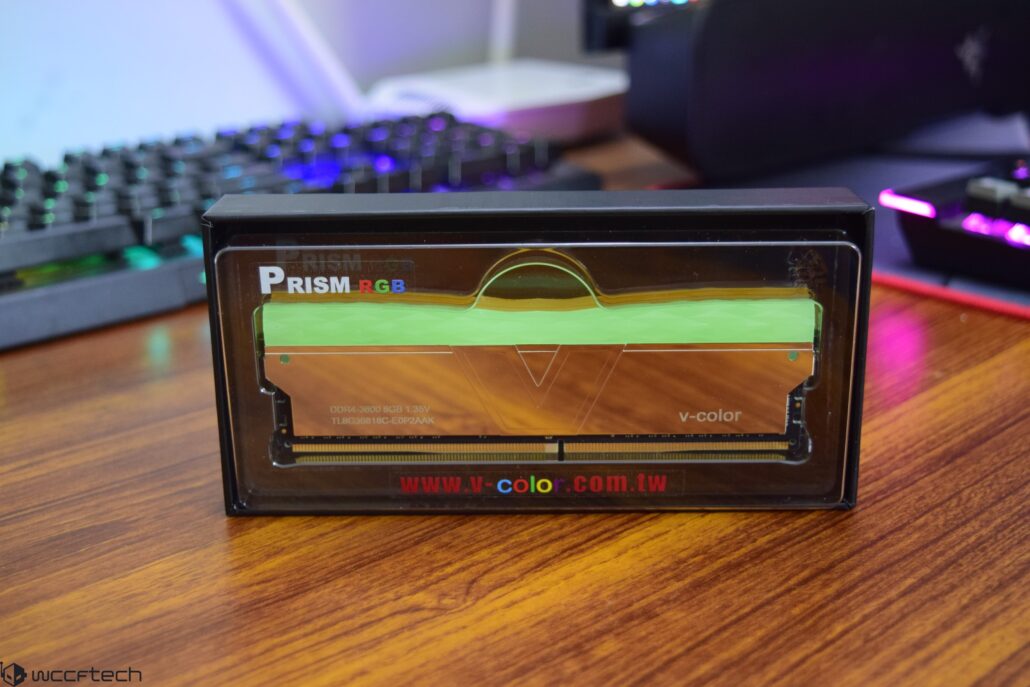 The first thing that catches your eye is the contrasty colored diffuser which is featured on both modules. One module features a green-colored RGB LED diffuser while the other is an orange-colored diffuser. The memory kits come with a choice of 7 different colors for the diffuser. The ones we received had an orange and green diffuser. I am not a big fan of these colors and would probably go for a single color design rather than diffusers of two non-matching color schemes. 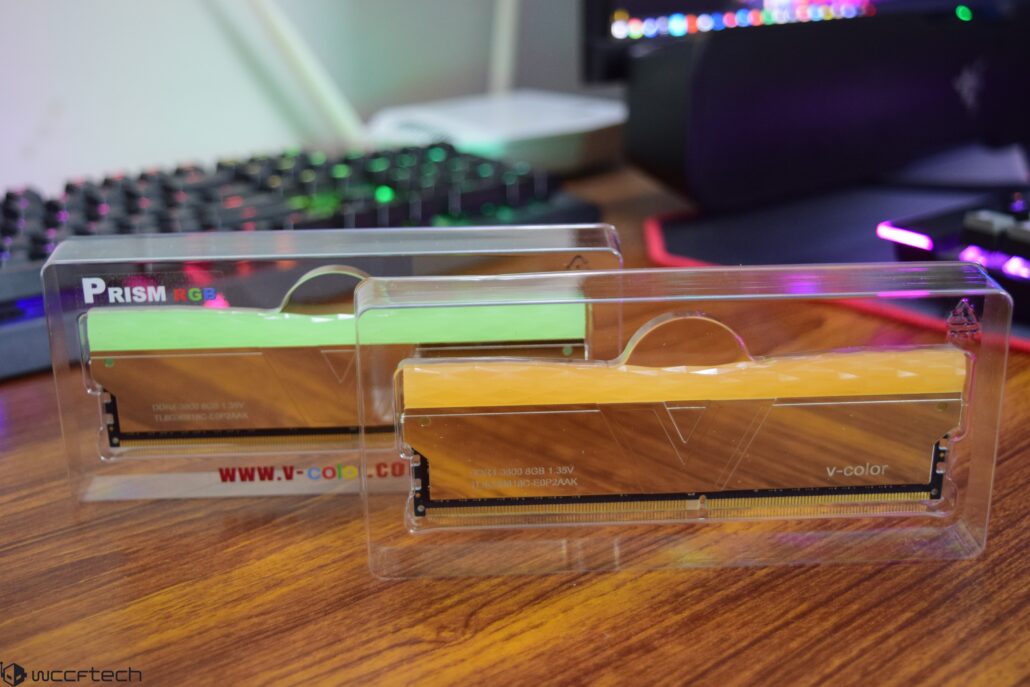 Both memory modules feature a copper-alloy heat spreader with a minimalistic design. V-Color went with a silver mirror-finish on each module which features a large "V" in the middle that represents the V-Color brand. The V-Color logo and specs are also etched on the metallic heatsink. 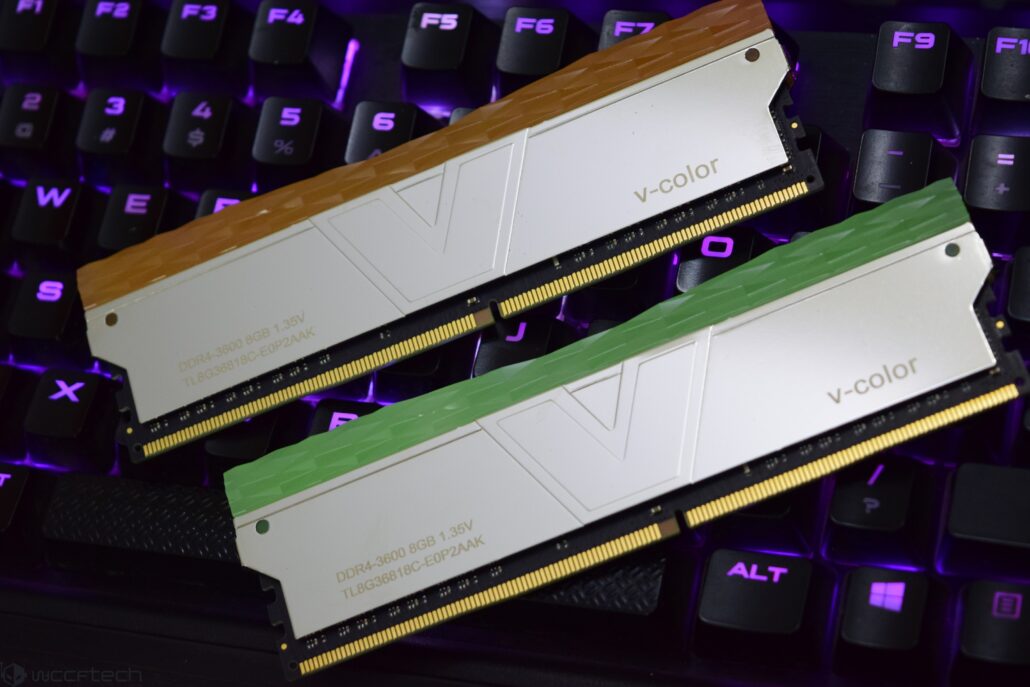 Silver is a very neutral color when it comes to building PCs so the color scheme itself won't be much of an issue. There are 5 LEDs featured on the PCB which light up the diffuser and to be honest, the diffuser pastel design isn't that much noticeable when the RGBs are running in all of their glory. 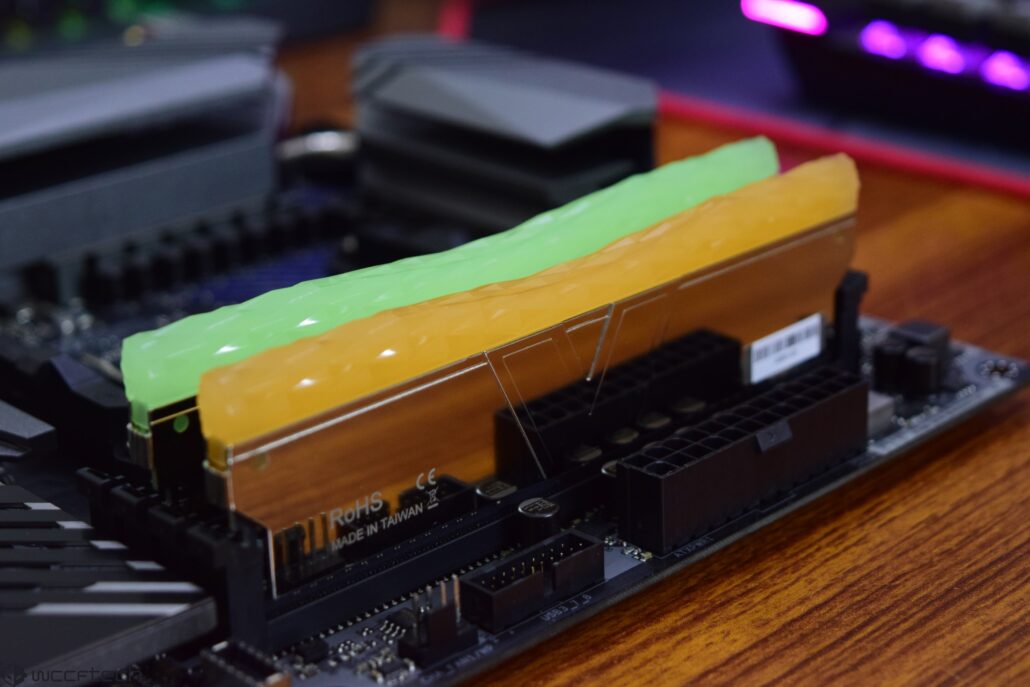 The memory kit makes use of 8Gb Hynix CJR/CFR (C-Die) memory dies which are pretty decent & allows for good overclocking which I will show in the performance tests in a bit. The specific part number for these dies is H5AN8G8NCJR-VKC. 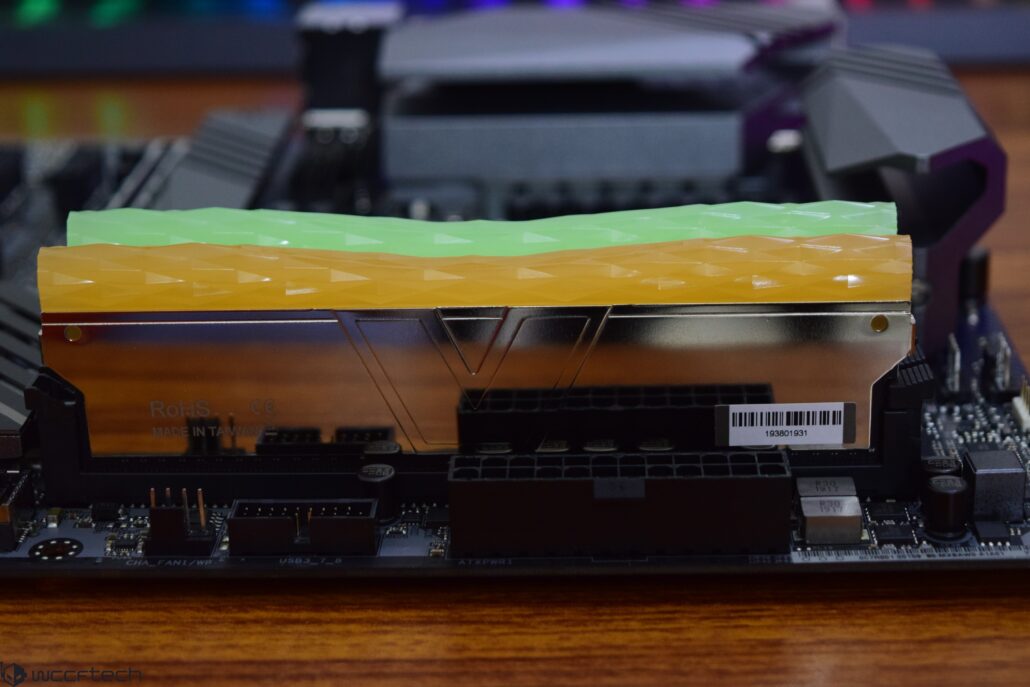 For testing, I used the latest Intel Core i9 9900K processor which is compatible with higher frequency memory. The motherboard used was a GIGABYTE Z390 AORUS Master and I booted the memory without any issues. The XMP profile to enable the 3600 MHz frequency had to be set from the BIOS which wasn't a hard task. The V-Color PRISM II is compatible with the latest AMD (X570) and Intel (Z390) mainstream platforms. The pictures of the memory with the X570 Creator from ASRock were taken just for aesthetics while actual testing was performed on the Intel setup. 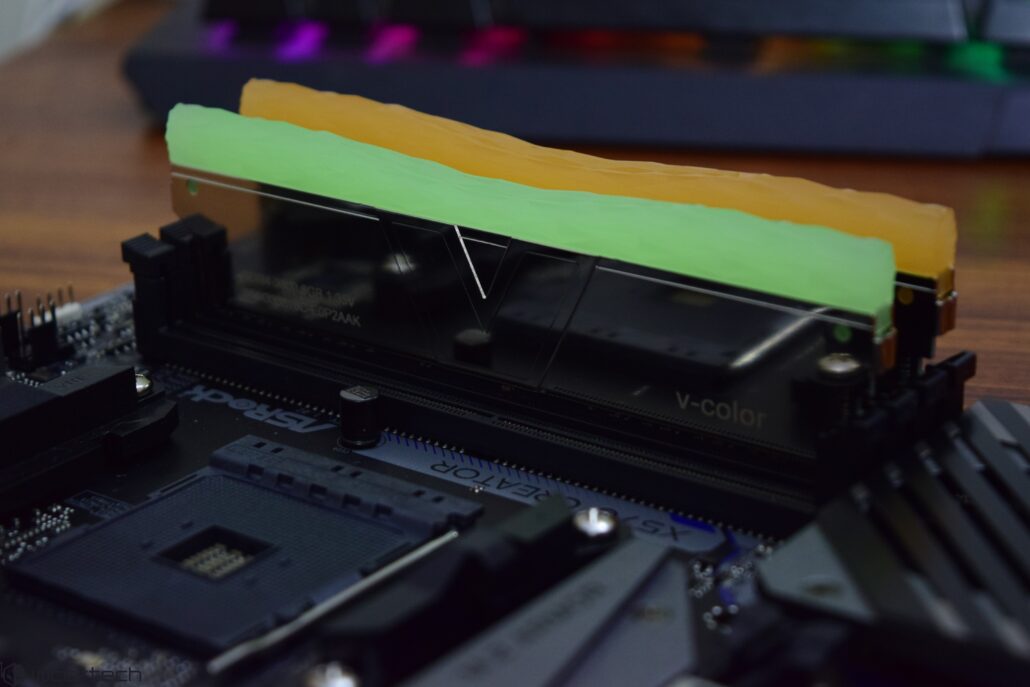 The memory kit comprises of 2 DIMMs that operate in dual channel mode. Since we were running a Z390 platform, the memory was operating in dual channel mode. The memory is clocked at 3600 MHz and will run at 2600 MHz be the default when XMP profile is not enabled since that is the JEDEC standard clock speed. Clock timing is set at 18-22-22-42  (CL18) and the capacity is 16 GB for this specific kit.

For AIDA64 memory tests, I ran the V-Color PRISM II RGB memory both at stock and overclocked speeds. The stock speed was configured at the XMP profile of 3600 MHz CL18 while for overclock, the voltage was pushed to 1.4V with a maximum overclock of DDR4-4266 MHz which gives a nice boost in terms of bandwidth numbers and overall responsiveness on the PC. The same frequency wasn't obtainable with the stock voltage of 1.35V but 1.40V doesn't put much stress on the DDR4 modules either. The timings were left at CL18 and the memory booted in the system fine without any crashes.

There are many things that users have to consider when selecting a memory under the $100 US segment. You either lose performance, design aesthetics or overclocking capabilities that come with the higher-tier DRAM kits. V-Color is able to deliver all three at a very reasonable price point of under $90 US. 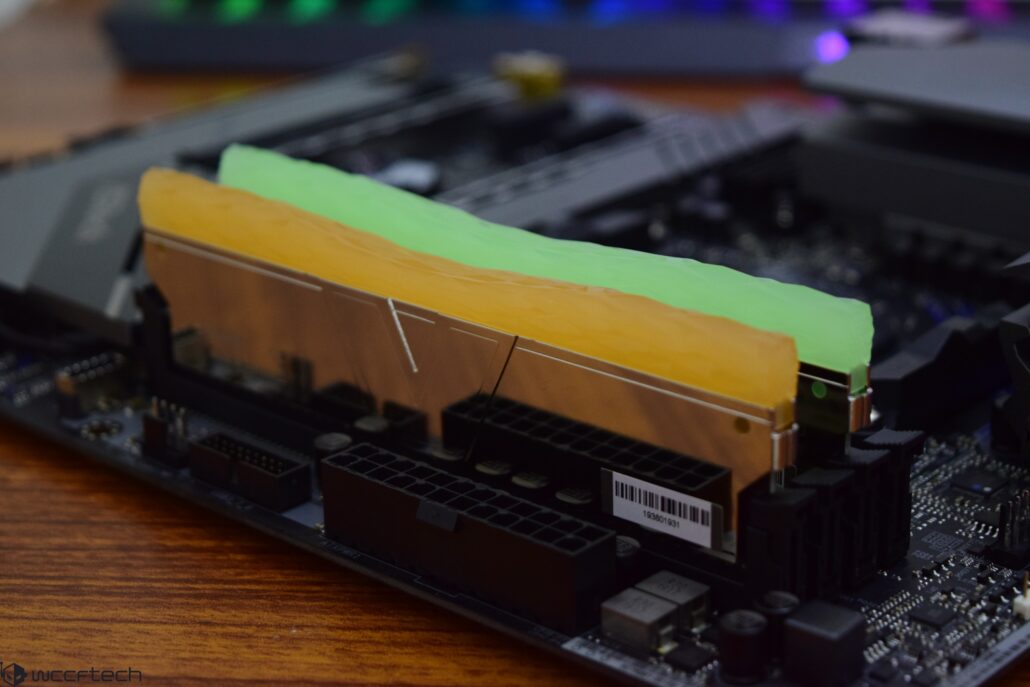 In terms of performance, you are looking at a standard 16 GB kit with XMP 2.0 support that runs at 3600 MHz with CL18 timings. You'd mostly get the average kit performance out of the box which is solid and consistent but overclocking is pretty awesome with the kit hitting 4266 MHz at 1.4 Volts. The Hynix C-die really shows that it can be as good or better as Samsung's B-die solutions out in the market. Furthermore, V-Color's PRISM II RGB memory is the only 3600 MHz kit with an RGB diffuser that I could find on several major retail outlets with the next 3600 MHz options from the likes of G.Skill and Corsair being at least $10-$15 US more expensive. The color choice is something that I am not a big fan of but V-Color has stated that 7 different colors for the diffuser are available which is a good thing as user preference should be accounted for.

If you are really on a tight budget but want that extra RGB bling in your PC, then V-Color PRISM II RGB DDR4-3600 MHz is a solid purchase at $88.99 US (Amazon), offering a sweet design with RGB and some really impressive overclocking capabilities for a kit this cheap.

If you are really on a tight budget but want that extra RGB bling in your PC, then V-Color PRISM II RGB DDR4-3600 MHz is a solid purchase at $88.99 US (Amazon), offering a sweet design with RGB and some really impressive overclocking capabilities for a kit this cheap.