Until Dawn: Rush of Blood Review – Horror on Rails

Until Dawn: Rush of Blood

Developed as a complementary (yet standalone) horror experience, Until Dawn: Rush of Blood builds upon the tropes and setting of the original title. The result is an on-rails experience that infuses proper horror elements into a shooter in the same vein as House of the Dead, though there’s no campiness to be found in Playstation VR.

Many of the early levels in Rush of Blood should feel familiar to those that played through the similarly titled horror title from last year. There’s very much the same foyer and theater rooms of the original manor, though they’re been reworked to accommodate a roller coaster soaring through the front door.

Story beats and plot devices in this VR-centric shooter should also invoke a sense of familiarity that survived the first Until Dawn, and while playing through the first game isn’t required, much of the story notes might be lost on newcomers. Through the game’s interludes between missions, it’s implied that the horror might all be brought on through a nerve gas used by the first game’s antagonist, the very same you’re taking the role of at the head of a roller coaster.

Save for the role of a circus ringleader played by Larry Fessenden, there aren’t any other notable characters to Rush of Blood and frankly, a horror game of this nature isn’t necessarily required. The lack of Peter Stormare reprising his role as the psychiatrist from the first Until Dawn is certainly lamentable, but Larry Fessenden does a great job in his role both in vocal performances as well as overdramatic facial work. Fans of the original Until Dawn should recognize him as the very same actor that portrayed The Stranger, Jack.

With the movement limitations of a virtual reality headset and the tether that keeps the player from moving too far, the thought of an on-rails shooter seems perfectly suited for the peripheral. As forward movement is taken out of the player’s hands, that leaves the task of aiming and shooting left to the player’s own devices. Anywhere the player can look is free to examine and leaning around in one’s chair is a good way to get a second look at the scenery, especially with obstacles on the track require some physical movement to get out of the way. 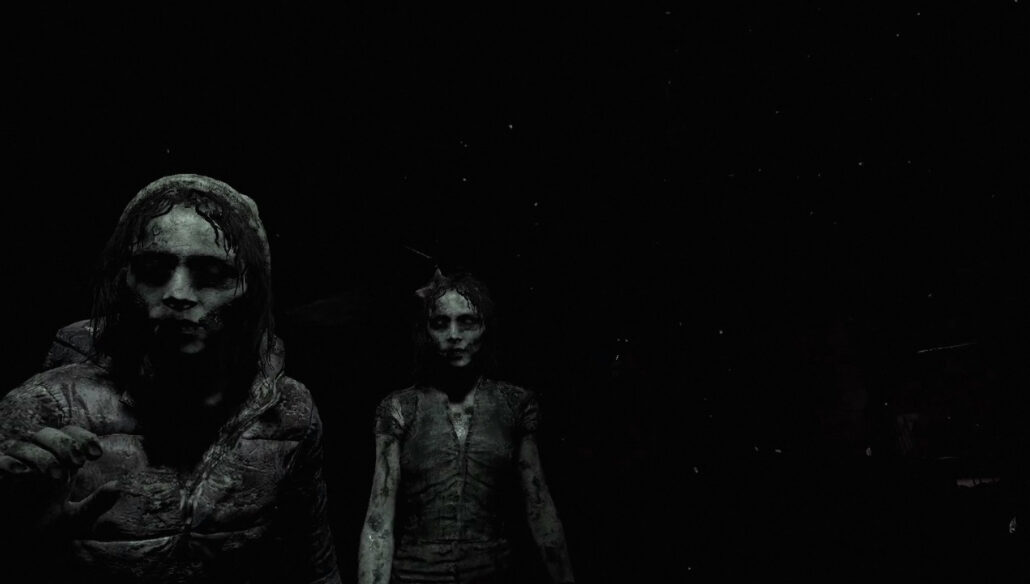 The gunplay in Until Dawn: Rush of Blood is controlled either by use of a DualShock 4 controller or pair of Playstation Move wands. If you’ve even played Blue Estate on the PS4, the use of actively moving the controller around to aim and hitting L2/R2 to fire should feel natural. This may work for some people, but Rush of Blood tends to send waves of enemies at the player, often from different sides of the screen. Being able to freely aim in independent directions with a pair of wand controllers makes those peripherals much better suited for the experience.

Despite using the PlayStation Move controllers for much of my time with Rush of Blood, I found myself wanting to aim off-screen and pull the trigger to reload. Unfortunately, everywhere the player can look is considered on-screen and this option never worked. Instead, the player has to press the large Move button on demand to reload. This took some mental training to readjust as I’d often keep firing away with an empty clip at whatever horrors came my way.

Using horror as a medium for rail-shooters can be a very touchy situation. If not treated with the seriousness that something like Dead Space: Extraction strived for, the whole experience might turn into a campy House of the Dead scenario. Until Dawn: Rush of Blood stays more in line with being an authentic horror experience even if that route might be a little bumpy. Rush of Blood stays true to its horror roots and the entire six-hour experience never breaks character.

Building a believable horror setting is a tall order for any game, doubly so for one that takes place exclusively in virtual reality. When not blasting away at waves of demented clowns and other horrific humanoids, the long stretches between firefights bring the tension to an absolutely high. Any time the roller coaster’s pace slowed down, I continually braced myself for the fear of something popping up from off screen or a ghastly voice whispering threats into my ears.

Rush of Blood gets its namesake from being set up on rails, and as such, uses the roller coaster motif for some great horrific moments. Being strapped into a roller coaster means there’s no escaping the moments when the game brings you to the top of a hill and forces the player to reconsider what sort of precarious position they’ve gotten themselves into before barreling downwards at breakneck speeds. As a player prone to a slight fear of heights, I could feel my stomach jump up in my throat when racing down a hill and windy turns. The adrenaline rush I got from even playing a single level like that was unlike any other experience on PlayStation VR to date.

To incentivize the player to come back to previous levels, there’s a number of collectibles and additional paths (usually uncovered by shooting switches or wooden barricades) scattered throughout each level. Come the second time around, Rush of Blood’s numerous jump scares might not have the same impact as the first time around, but the roller coaster sections surely are enough to make the hairs on the back of your neck stand up.

Until Dawn: Rush of Blood fuses together two genres together that usually couldn't be farther apart into something unique that's sure to bring along an adrenaline rush. While the scare factor might wear thin in repeated playthroughs, aiming for the high score and going for a complete set of collectibles should be enough for some players. You may just want to make sure you’ve got an extra pair of pants.

Until Dawn: Rush of Blood is a fine example of how to infuse horror into the unlikeliest of genres, although replayability might be somewhat lacking.