One thing that I absolutely adore Arc System Works for is their unrelenting quest to do two things: the first, make 2D fighting games both nostalgic and fresh. The second, make fighting games funky as hell. Anyone that’s played Guilty Gear or BlazBlue already know exactly what I mean by both of those statements, as should anyone that’s played Dragon Ball FighterZ. It seems fast, but we’ve got yet another Arc System Works fighter coming out very soon, and this one is every bit as quality as anything Arc System Works have ever produced.

Originally released in Japanese arcades back in 2012, Under Night In-Birth is a franchise that it’s understandable if you’ve never heard of it before, but fighting game fans should definitely take note. What we have here is a traditional sprite fighter with a variety of interesting anime archetypes and an incredibly solid, fun fighting game mechanics. 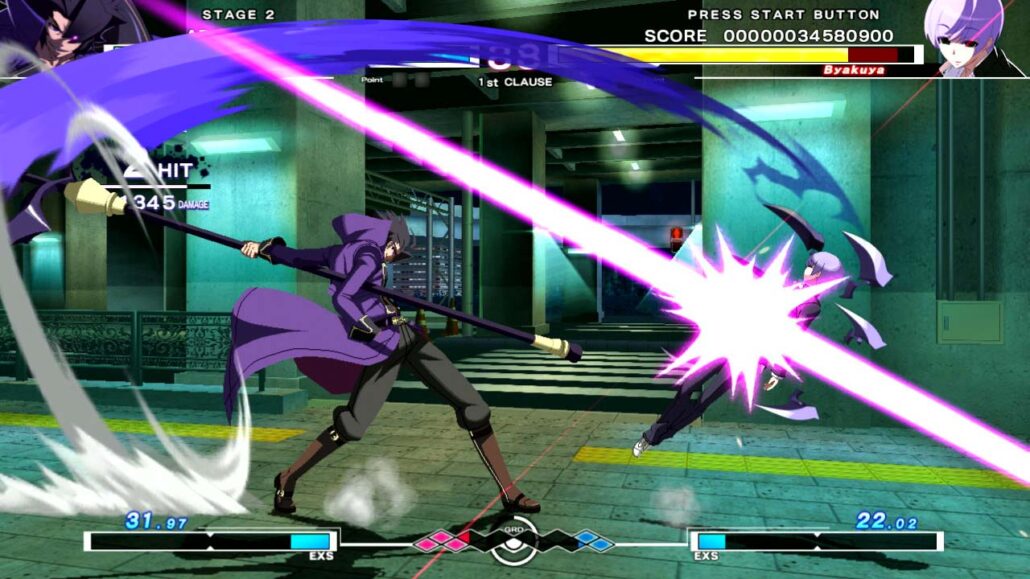 Under Night In-Birth Exe Last[st] (yes it’s an insane name so we’ll be calling it UNIB from now on) is the third edition of the arcade fighter and includes loads of characters that are all unique and interesting. Arc System Works know how to make fighting games, that much is clear from their vast library, and you can pull off a variety of moves in this four-button fighter. The game has the usual quarter circle and dragon punch motions, in addition to charge motions for one particular character, so fighting game fans will already know how to string combos together.

You get Light, Medium and Heavy attack buttons, along with a button which charges a GRD gauge. This is an extra mechanic which you can use to break opponents with mastery but is a bit obtuse at first. Luckily, like many Arc System Works games, the comprehensive tutorials will help a lot. It’s a chain combo fighter, so you can easily string L > M > H into one another, and with slightly stricter timing, you can string H > M > L together. All you need to know after that are the character’s special moves and you’ve basically learned a new character. 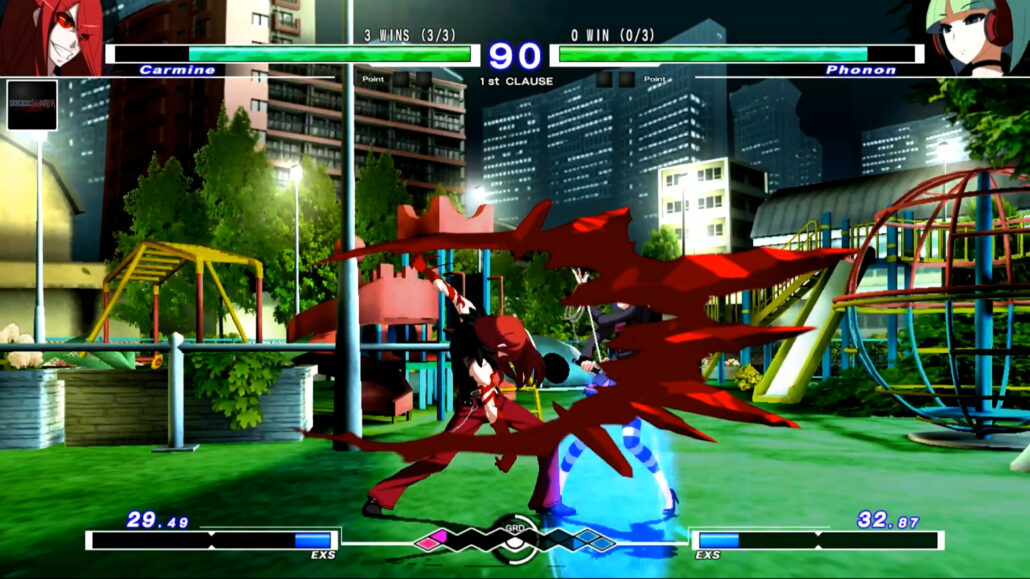 With the variety of special moves, new gameplay styles arise for each character, as you would expect. Vatista, for example, is a charge character that has long reaching normals, easily able to punish approaches and follow up with another attack. Then Carmine is a vicious character with a variety of lingering projectiles that allow him to keep up the pressure and open up opponents. All of the characters have their eccentricities, as you’d expect, and these are easier to find and exploit since the basic combo system is so quick and easy to learn.

In many ways it evokes to recent Dragon Ball Fighter, another four button fighter, only that is in a tag team format, with some obviously Dragon Ball-inspired mechanics. Under Night In-Birth is a more traditional fighter, but the way it feels simple for new players to jump in and begin comboing is similar to Dragon Ball FighterZ’s accessibility.

The only let down in Under Night In-Birth for me personally is the story mode, and anyone that’s played a few Arc System Works games will know exactly what I’m talking about. Instead of being a traditional story mode, say, cutscene, fight, cutscene, and so on, you get a visual novel on the side. Nothing more, nothing less. Each section focuses on one of the game’s characters, giving you some interesting insight into the world the game is set in, but it’s just a visual novel, and not even the most interesting one Arc System Works has included in its games. The insight into the characters is nice, but the stories it tells are for the most part incredibly mundane. There’s a reason the story is pushed off to the side in favor of the arcade and multiplayer modes. 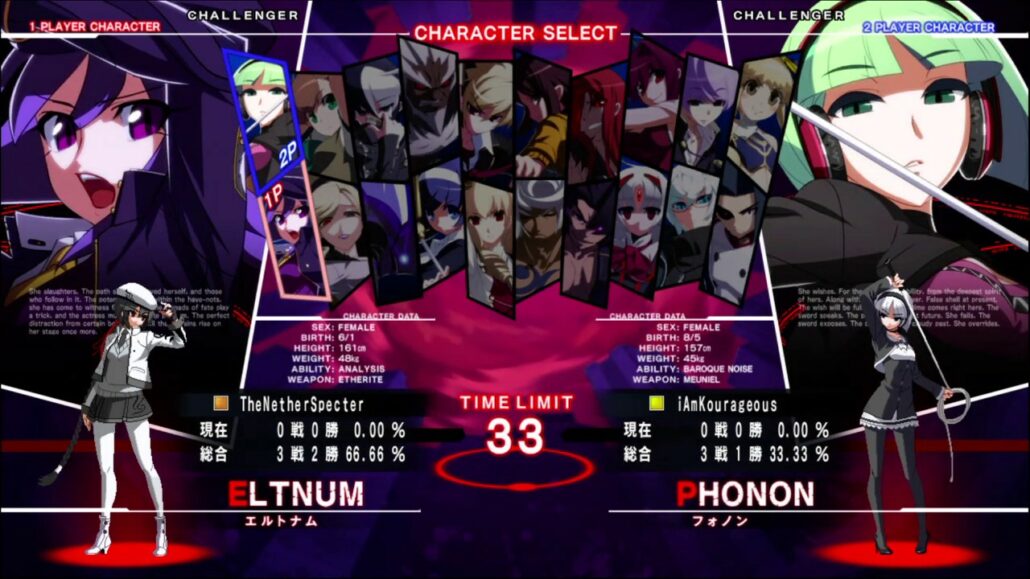 But that plays to Under Night In-Birth’s successes, I suppose. It is a stylish Arc System Works fighter, and as many of them do, it decides to play with a few conventions of the genre in the name of style. Rounds aren’t called “rounds” they’re called “clauses”. At the beginning of fights, the words “RECURRING VOID EFFECT” appear on the screen. Complicated character descriptions, far too long to read in a few seconds, flash past the characters. As the round begins, instead of “fight” the announcer chimes in with “DIVIDE”. It’s a weird choice which is purely stylistic, no other reason for it, and yet it accentuates what UNIB is. It’s unique and stylish, whilst being an incredibly solid and enjoyable fighter underneath that.

And then there’s the music. From the high energy tune that plays on the character select screen to the blood pumping run up to the fight, and then the mixture of intense and jazzy tracks that play in the fights themselves. All of it is quality, memorable, and again, just accentuates that UNIB is a stylish game, much like Persona 5 did last year with its menus and music. 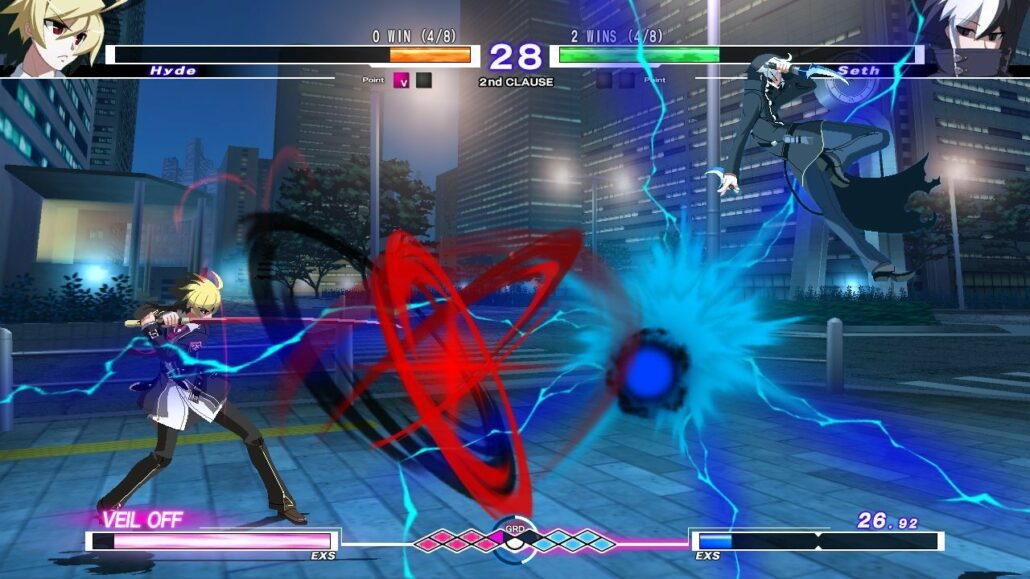 There are not many games like Under Night In-Birth, and this is the best version of the game. Is it worth getting over the other fighting games that have released lately? Arguably, yes. It’s a fighter that offers a lot of flexibility in your combos and provides both an exciting and competitive environment for players to hone their skills. And that’s all without mentioning the excellent sprite artwork and, very basic, but nice 3D backgrounds that add an element of depth to the world. Unfortunately, the backgrounds are usually the only part of the game that highlight it’s age.

Under Night In-Birth Late[st] is the complete package for fighting game fans, with the visual novel-like story being the only potential let down for anyone that isn’t used to how Arc System Works do things. It’s even worth buying, despite the excellent recent fighting game releases, because the combo flexibility and accessibility for both experienced and inexperienced fighting game fans are fairly unique even among fighters.