The market for micro games consoles still continues to grow in 2020, despite eerything else going on in the world. With the benchmark set by Nintendo's NES Mini in 2016, numerous competitors have tried bringing their classic library to market one by one. Each time a new console comes out, I'm amazed by the quality and selection of titles that I could instantly recognize from playing as a child. With Konami being the latest competitor to enter the ring, the selection of early-90's titles is about to get a lot larger. The TurboGrafx-16 Mini is the latest competitor for shelf space and is bringing with it a whole bunch of friends you've probably never heard of.

Right out of the box, the TurboGrafx-16 Mini is unmistakable in its build. Following the same concept of shrinking down a home console to fit in the size of your hand, Konami decided to  only make minor adjustments to the form factor of the Hudson-developed console. At 24cm across, it's far larger than any of the other Mini or Classic consoles that have been released by the major console manufacturers. Curiously so, the Japanese and European PC-Engine Mini are even smaller, each dropping down to about 12cm laterally. Despite the hulking size, Konami has done a fine job of replicating the design and form factor of the retro console, from the removable rear cover that hides the HDMI and micro-USB ports for power/video to the non-functioning HuCard port on the front. Even the sliding power switch has a weighty click into position and slides out the same plastic locking pin that would normally keep a HuCard from being pulled out by curious schoolchildren during play.

While the original TurboGrafx-16 only featured one single controller port, the Mini variant comes with two USB ports on the front of the console (and only one TurboPad in the box). Hori will be releasing a number of accessories, including a TurboTap that supports up to five controllers, in the near future, but for our review, we were only provided with the base TurboGrafx-16 Mini home console.

The standard issue TurboPad is the controller that most TG16 owners would be most familiar with, as the original Pad was phased out early on in the PC Engine life and wasn't a part of bundles when the console was released in the United States. This simple two-button controller is similar to the NES gamepad in most ways but most notable is the inclusion of a 3-mode turbo switch for each button built right into the controller. The floating disc design for the d-pad takes some getting used to if you're accustomed to Nintendo's discrete directional pad but I had no problems getting a feel for the controller after my few couple of rounds of Bomberman '93. Konami's build quality easily matches that of the original console and the tactile response felt just as good as the TurboPad that's still attached to my thirty year old TG16.

Nintendo's micro consoles had Mario, Sega had Sonic, and Sony had Cool Boarders. Each of the classic consoles had a lineup that represented the first-party strengths of their respective platforms. For Konami and the TurboGrafx-16 Mini, the lineup feels more like a deeper dive into some hidden gems of the platform. To build up the roster of fifty-plus titles on the TurboGrafx-16 Mini, the catalog is broken up into English titles for the TurboGrafx-16 and Japanese language titles for the PC Engine/CD-ROM/SuperGrafx. Strangely, no matter whether you purchased a Japanese or English console, the titles will always be in the same language (meaning no English version of the enhanced Neutopia and Neutopia II). For players that don't have a grasp of the Japanese language, that means there will be some difficulty playing 32 out of the 57 included titles.

The PC Engine lineup does include a number of difficult gems to get your hands on, from Hideo Kojima's Snatcher and Ginga Fukei Densetsu Sapphire, but these titles are still preserved in native Japanese. This could have been a huge opportunity for players to get their hands on some of these rare titles in English for the first time, but I do have to respect Konami for wanting to preserve a playable slice of history in miniature console form.

What I find most fascinating about the lineup that's been picked by Konami for their miniature console are two things: having both HuCard and CD-ROM versions of a number of titles so that players can experience the strengths of the stronger console, and just how many side scrolling shmups were a part of the TurboGrafx-16. Nearly twenty of the titles are shmups, both of the vertical and horizontal varieties, and that's including Salamander, the TG-16 Mini exclusive title that was added in to make up for removing Tokimeki Memorial from the Western console launch.

Not every title in the TurboGrafx-16 Mini lineup is a hit, unfortunately. The likes of Bonk and Bomberman are always great, but Chew Man Fu and J.J. & Jeff? Not so much. I did have a somber moment during my review to make sure to play through J.J. & Jeff in memory of the late Shimura Ken but could not otherwise recommend this mediocre slapstick platformer to players looking for a good time. On the other hand, the action RPGs of Ys Book I & II and both Neutopia titles scratch a very particular itch that only Zelda on the SNES Classic was able to scratch.

For customization options, the TurboGrafx-16 Mini only offers a few options to change up the look of gameplay. Four different aspect ratios can be selected from the main menu in addition to the portable TurboExpress, an option I'd only recommend as a novelty as the screen is far too small to make anything out clearly. There's also a basic CRT filter to help match the 90's aesthetic but no smoothing or customizable scanlines are present. The rest of the options are barebones, from screensaver toggles to wallpaper and icons. Built into every title are four savestates (accessible by pressing both Select and Run simultaneously), making the TurboGrafx-16 Mini the best way to play those RPGs that came only with password support.

The TurboGrafx-16 Mini may be my favorite of the micro game consoles simply because it went in a different direction than just compiling a collection of the games players were already familiar with in one package. What Konami has produced here with the TG16 is a collection of some diverse titles and great shmups that showcase the strengths of their unique home console (although the lineup certainly has some stinkers). It's a piece of gaming history that deserves a spot on your shelf, whether or not you can understand enough Japanese to have a go at Super Momotarou Dentetsu II. 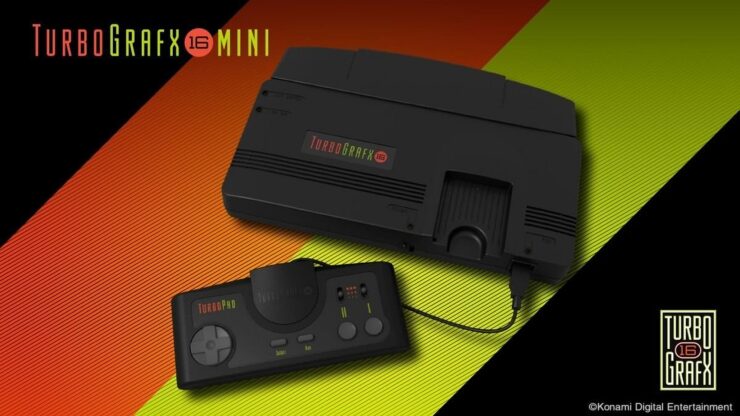 The TurboGrafx-16 Mini is an appealing slice of 90's gaming history and includes a library of shmups, rpg's, and other genres to create the most unique lineup of any micro games console, although players may only be able to enjoy half of the included titles without Japanese proficiency.