One of the keys to the Zelda franchise’s ongoing success is that it can’t be summed up as any one thing. Perhaps you like the carefully-crafted 2D classics like A Link to the Past, the groundbreaking 3D experiments like Ocarina of Time, or the open-world splendor of Breath of the Wild. While every game in Nintendo’s series has certain elements in common, each also has its own personality. That’s certainly true of the original The Legend of Zelda, which many have tried (and usually failed) to replicate over the years. Tunic is the latest to try to bottle that unique NES Zelda charm.

Primarily the work of lone Canadian developer Andrew Shouldice, Tunic is certainly cute, but is it more than just a shallow tribute? Does Tunic carve out a legend of its own? Grab your sword, shield, and something green; it’s time to put this adventure to the test. 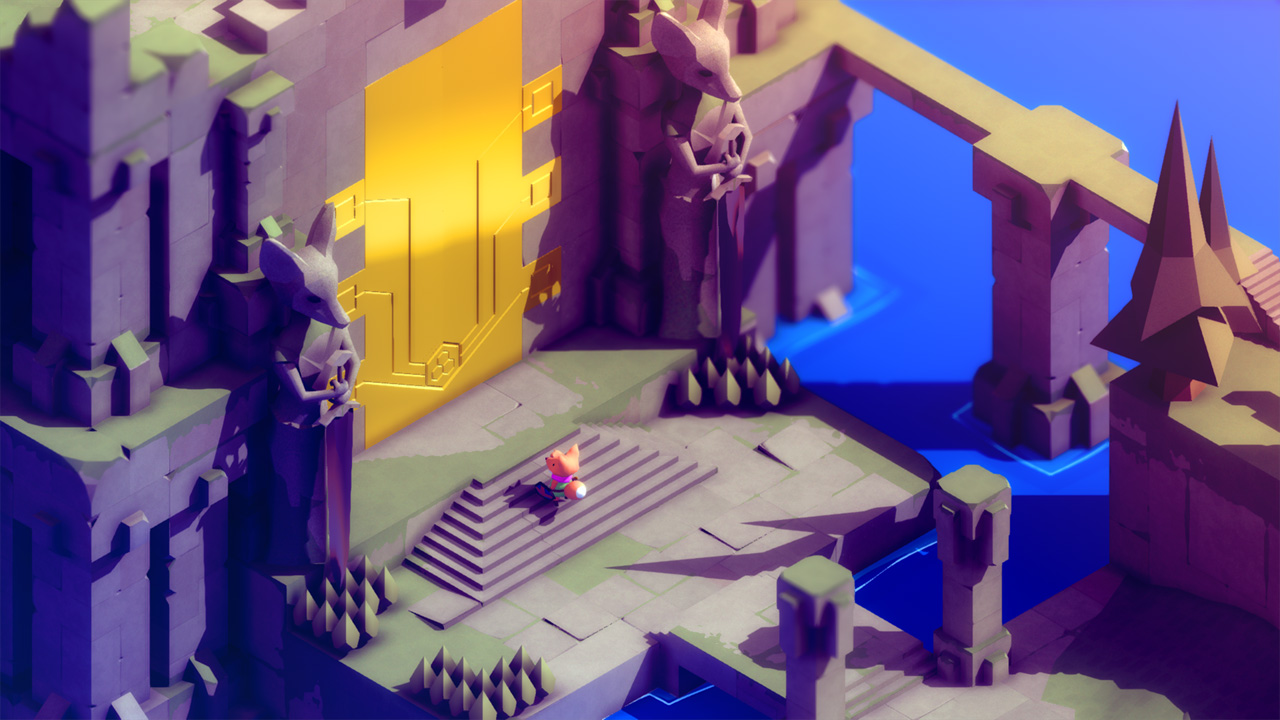 Tunic opens with a cuddly green-clad fox washing ashore in a curious land seemingly built upon the ruins of some ancient civilization. As always, it’s dangerous to go alone, but our foxy friend finds a sword and shield and soon comes face to face with the imprisoned spirit of a mysterious female fox who seems to be the key to whatever calamity has befallen this world. Sounds rather familiar, no? That said, not everything is exactly as it seems at first – there’s a darker side to this world you’ll discover in time.

Tunic’s basic gameplay is as simple as it gets. You have your sword, your shield, and can dodge roll. Eventually, you gain more tools -- a magic wand, grappling hook, and more. While Tunic’s core mechanics are pretty straightforward, you do need to keep your shield up and play carefully, as enemies will punish those who charge ahead recklessly. 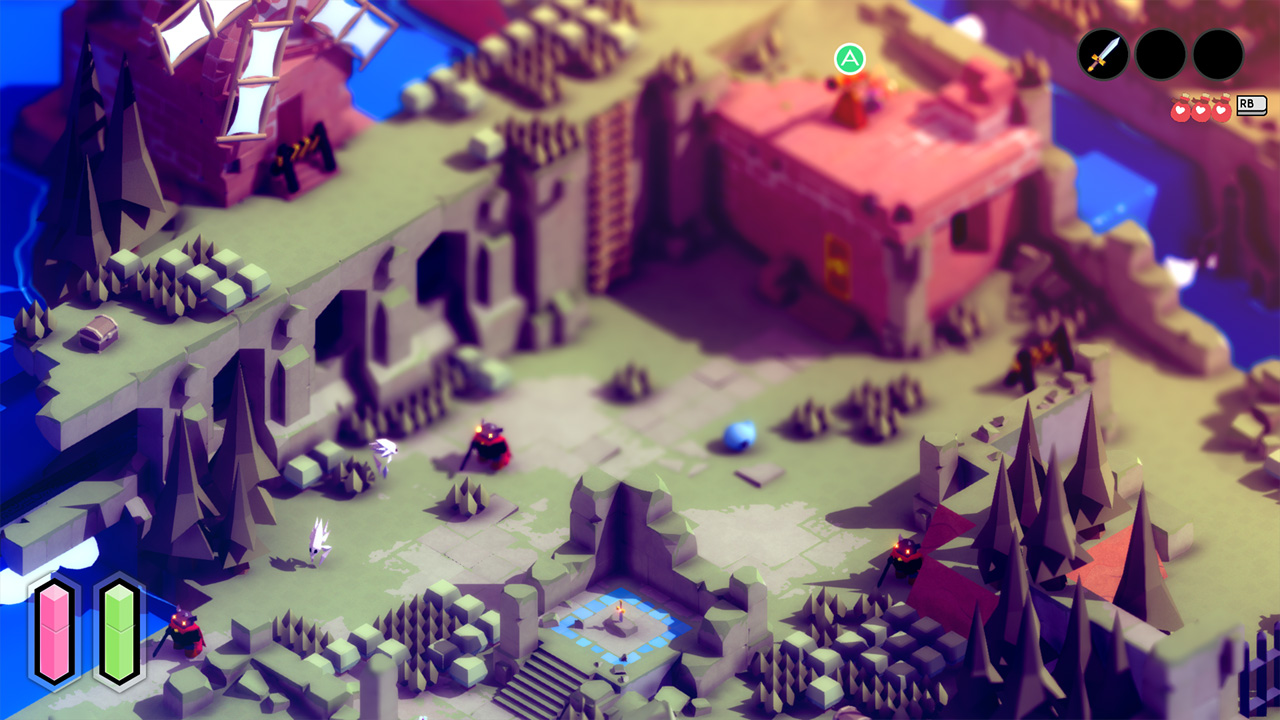 The world of Tunic also follows The Legend of Zelda’s lead, as it offers very little of the handholding expected from most modern games. Tunic’s world is largely devoid of NPCs and explicit hints, and the rare times the game does serve up a bit of text, it’s usually written in an indecipherable language unique to the game. Thankfully, you’re not entirely thrown to the wolves, as you collect pages of a “Sacred Book” that resembles a lovingly-illustrated NES-era instruction booklet. Much of this manual is still impossible to read, but it’s packed with helpful hints for those who pay close to the diagrams, maps and jotted ballpoint-pen notes contained within.

Overall, Tunic’s level design is remarkably tight. The focus is more on exploration than the kind of block-pushing puzzles Nintendo became increasingly fixated on over the years. The game uses its fixed isometric view to its advantage, with many hidden secrets and passageways you may easily overlook depending on the direction you’re approaching from. Poking around every nook and cranny is almost always rewarded. Most of the time, Tunic does a great job of guiding the player forward while letting you feel like you’re in control – between your “Sacred Book” and subtle environmental clues, you’ll (almost) always find a way forward with just a little thought. 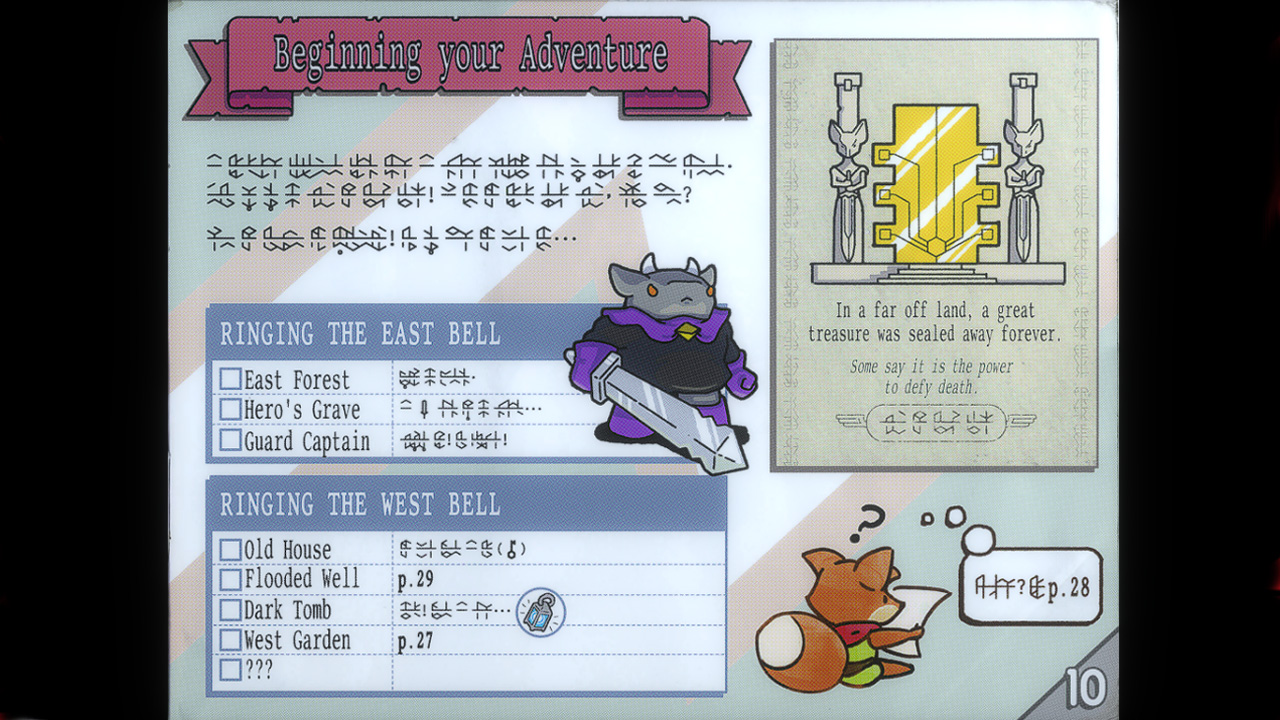 Tunic’s world isn’t just well-designed, it looks great too. While the number of polygons on screen at any one time is limited, the game layers on the atmosphere as you delve into shadowy woods, imposing temples, creepy caverns, quarries... and even darker places beyond. The amount of attention to detail on display here is rather remarkable considering Tunic was mostly a one-man job, and an evocative, sometimes-intense score further elevates it.

At this point in the review, you may have the impression that I loved Tunic, and indeed, this old Zelda fan was pretty entranced... up to a certain point. Without spoiling anything, Tunic throws the player a curveball in its back half. Following a major event, you’re tossed into an altered version of the world, the character upgrades you’ve worked hard for are stripped away from you temporarily, and the game’s challenge ramps up significantly. Tunic creator Andrew Shouldice has said he was aiming for a “Nintendo Hard” experience, and for the first part of the game, he achieves it, but once that curveball is thrown, the game takes on a somewhat more Soulslike vibe. The game’s tone becomes decidedly gloomy and it starts throwing enemies and scenarios at you that frankly feel a bit unfair. 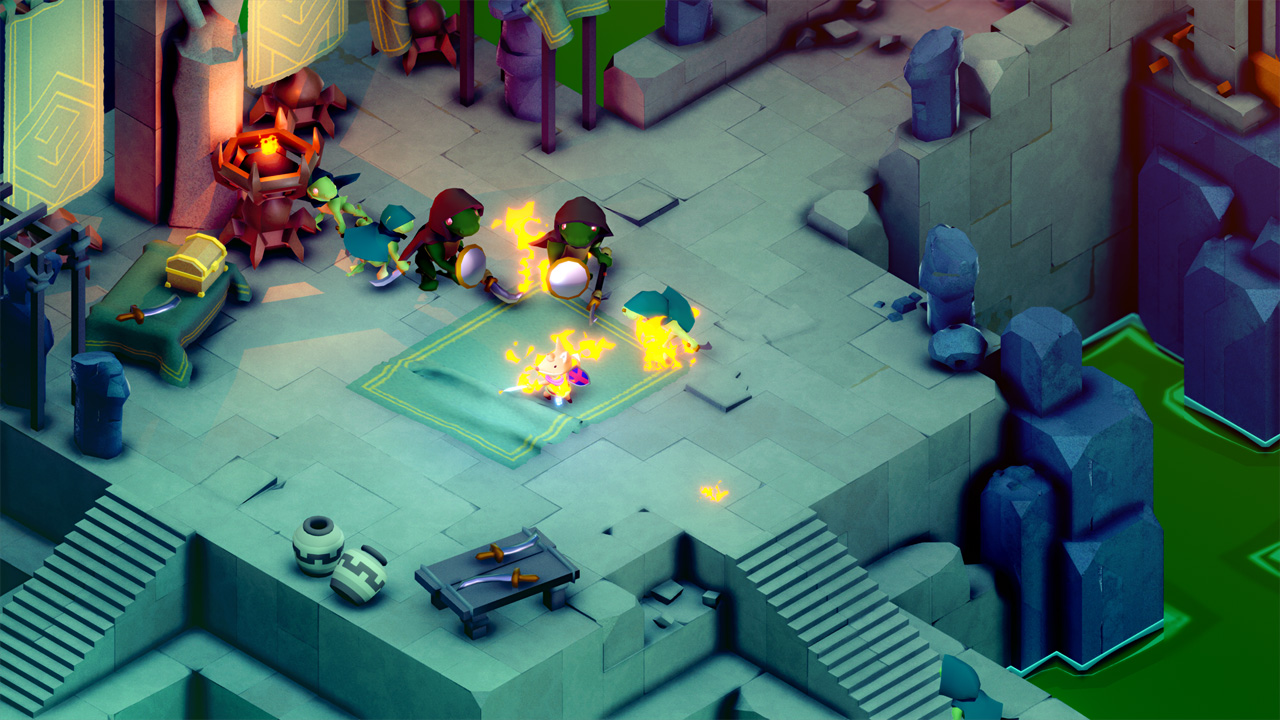 Don’t get me wrong, Tunic’s world remains fascinating, and some may welcome the additional late-game challenge. There’s nothing inherently wrong with taking notes from Dark Souls, I like From Software games myself, but I feel like Tunic initially promises something a little different than it delivers in its home stretch. It isn’t just a question of challenge either, as Tunic’s accessibility options include a “No Fail” mode that ought to allow almost anybody to finish the game. Pacing is also an issue, as the game takes its left turn just as the story feels like it’s reaching some climax, staggering the momentum it had built up. The game eventually regains it, but it takes a while.

More than most games, I feel like your reaction to Tunic will come down to your personal taste, gaming history, and level of patience. I loved the first part of the game, but then, I’m the precise target audience – an old Zelda fan who’s been playing since the 80s and used to spend hours poring over every detail of my NES games’ instruction booklets. Perhaps some will enjoy Tunic’s second part more than its first. Reviewers were invited to a Discord for sharing strategies and secrets, which kind of replicated that old “sharing tips on the playground” feeling, but in 2022 is it fair to expect players to venture onto Discord to figure out a game? I’m not entirely sure. My point is, while Tunic does some things very well, it won’t be a universal crowd-pleaser, and in fact, individual players may find their opinion wavering from one part of the game to the next. 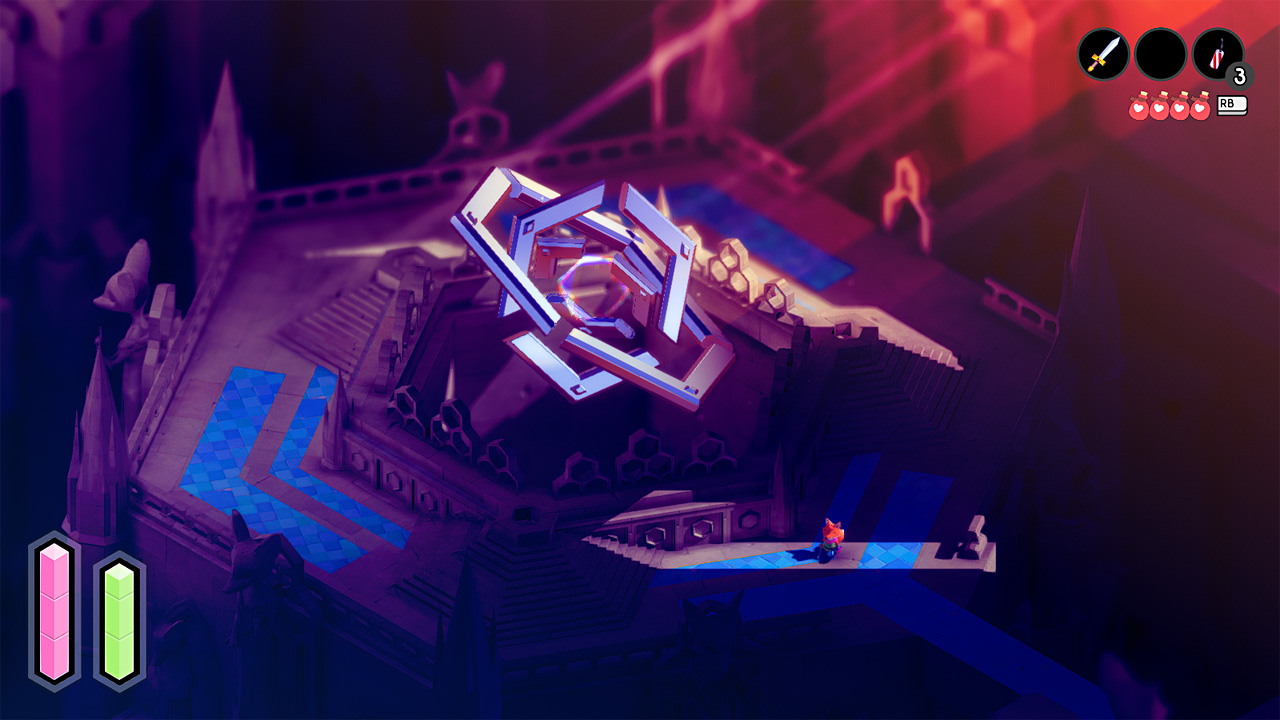 That said, if Tunic is your bag (and overall, it’s still mine), you’ll find plenty to keep yourself busy here. Finishing the game took me around a dozen hours, and there are plenty of additional secrets, challenges, and a New Game+ mode to pursue once you’ve rolled credits. Tunic is every bit as deep as the classic Zelda games it’s inspired by, regardless of whether you think it quite fills those games’ boots.

This review was based on a PC copy of Tunic provided by publisher Finji. You can grab a copy of the game here.

Tunic is a charming, absorbing adventure that recaptures the feel of the original The Legend of Zelda better than almost any other game out there (including some of Nintendo’s own efforts). The game’s enigmatic nature won’t be for everyone and a late-game difficulty spike may frustrate even old-school fans, but overall, Tunic is a successful link to the past.