It feels like the Trials franchise has been coasting for a while. Trials HD made a big splash on Xbox Live Arcade back in 2009, selling millions of copies and helping usher in a new era of indie success on consoles. Of course, Trials creators RedLynx didn’t say independent for long. Ubisoft snapped up the studio in 2011, and the results have been…mixed. Some of the more recent Trials games have certainly been solid enough, but none of have managed to recapture that 2009 excitement.

Well, after a bit of a layoff, RedLynx returns with Trials Rising, which they insist is the series’ biggest, most ambitious game yet. It’s a fine-sounding boast, but is the Trials series simply past its prime? Does Trials Rising take the franchise to new heights or continue the slow downward trend? Rev up your engines, it’s time to find out… 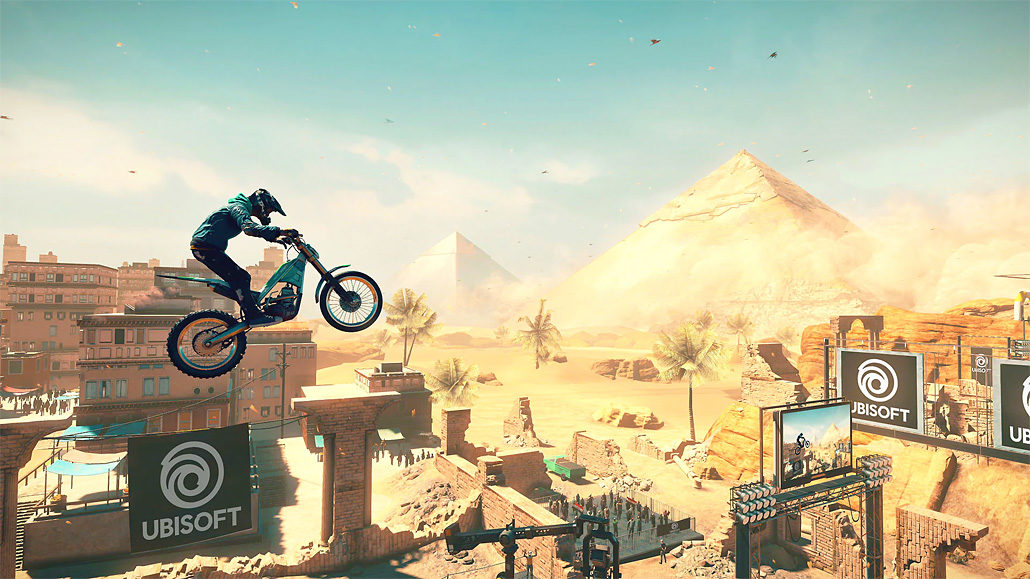 If you’ve ever tackled a Trials title before you know exactly how Trials Rising works. The games are vehicle-based platformers rather than true racers, as you’re restricted to a 2D plane and only have to worry about accelerating, (very occasional) braking, and shifting your weight forward and back with the left analog stick. The latter is the linchpin of the game – you need to constantly tweak your orientation to land jumps and keep your bike under you while climbing and descending slopes. Even a flat straightaway can send you sprawling if you peel out when not properly balanced. If you’re new to this series, the controls may take you a couple minutes to get used to, but not much more than that. The basic Trials mechanics are as solid and easy to pick up as ever, but there’s no denying they’ve barely changed in the last decade. Trials Rising even ditches some past attempts at innovation, like the trick system introduced in 2014’s Trials Fusion. 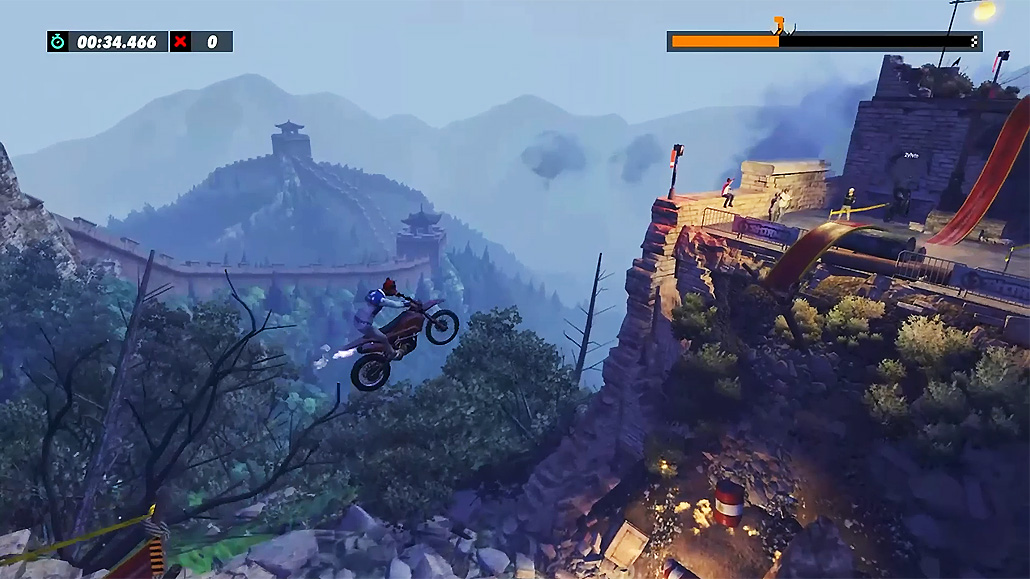 While the basic Trials formula hasn’t changed much, RedLynx has gussied it up some. Trials Rising goes for a world tour approach, with iconic places like Yellowstone National Park, the Eiffel Tower, and the Great Wall of China now sporting elaborate motorcycle tracks. While not a huge visual step up from Trials Fusion, the new tracks are nicely detailed and varied, and mostly run smoothly (the game does suffer from odd half-second stutters occasionally).

Trials Rising’s “Cruis’n the World” theme is bolstered by a new world map stage select screen. The game also adds various Sponsors, which offer “contracts” for each track, which are challenges you can take on to earn extra in-game cash and XP. Each sponsor tends to focus on different things – Team RedLynx offers basic time-attack or “beat racer X” challenges, while Fox Racing Gear is more focused on pulling off flips. The new map and sponsors add a little bit of flavor to Rising’s campaign, but ultimately, they’re mostly an aesthetic change – just a fancier version of the menus from past games. 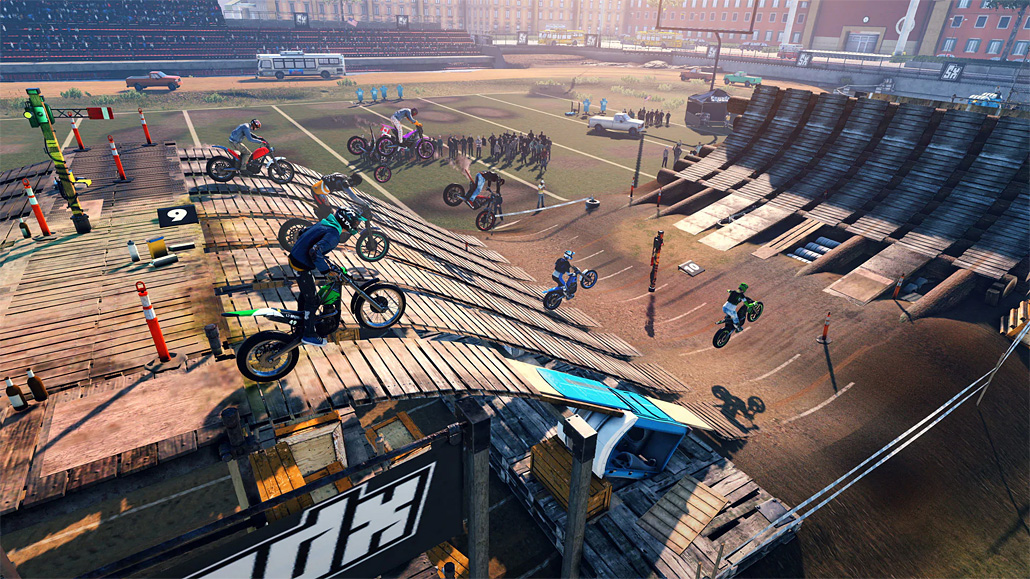 Following a couple anemic entries, Trials Rising’s track designs are largely a return to form. Throughout the campaign you’ll find yourself navigating platforms suspended from hot air balloons, racing to escape a plummeting cargo plane, and bunny-hopping your way to the top of Mount Everest. That said, like so much of Trials Rising, these creative track themes are largely flash. If you’ve played a previous Trials game, you’ve seen the crazy jumps, loop-the-loops, and explosions before. Again, the tracks are fun, but RedLynx just can’t seem to expand their formula in a meaningful way.

Trials Rising’s difficulty curve is also very familiar. The game begins on a fairly welcoming note, serving up manageable obstacles and opportunities for big air, but by the end tracks become intricate trial-and-error endurance tests that require the player to bunny hop over precarious platforms and scramble up near-vertical slopes. The problem that’s always beset Trials remains – as the game becomes more challenging, it becomes less exciting. RedLynx has never found a way to fully marry the giddy thrills of early tracks with the technical precision of late-game ones. 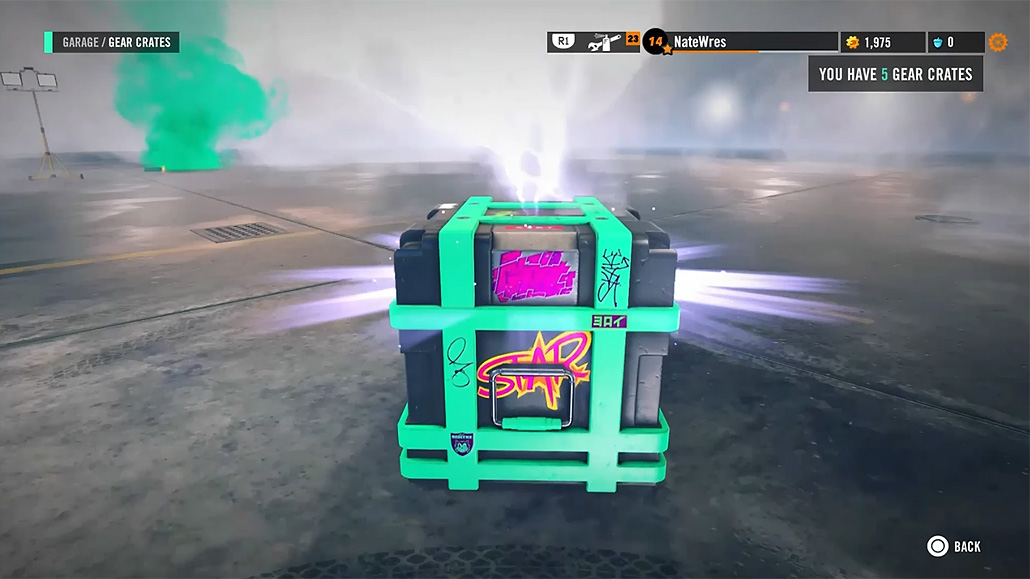 So, flashier presentation aside, does Trials Rising add anything to the well-worn blueprint? There are a few silly little additions, like co-op tandem bike racing and some new skill games, but the thing you might notice most are the ramped-up microtransactions. Trials Fusion added in-game purchases post-launch, but Rising pushes them harder, and yes, the game does include loot boxes. Sketchy loot boxes at that – no odds are displayed, duplicates come up often, and they can be purchased with real money. Ubisoft has been moving away from paid loot boxes in their bigger games, but I guess they figured they could get away with them in a budget title like Trials Rising. 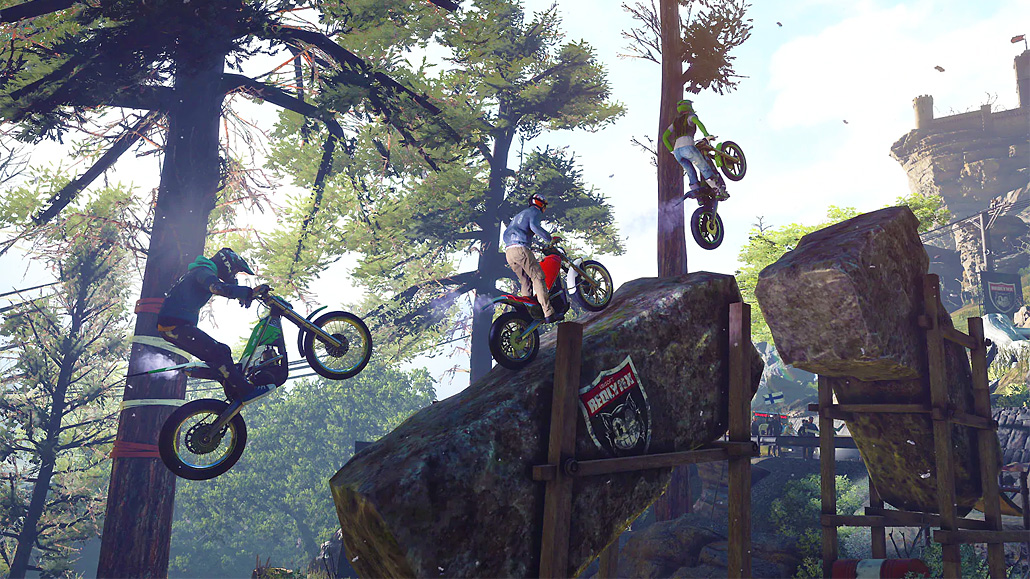 Thankfully, most of the extras Trials Rising lets you spend money on are purely cosmetic and thus can be safely ignored, and, really, the base game is a pretty good deal. The game serves up nearly 120 tracks, more than twice as many any previous entry in the series. Getting Gold medals on all those tracks will take you at least 15 hours, and then there’s also Platinum and Diamond medals, online multiplayer, party games, and a track editor to fiddle around with. Given its budget price, Trials Rising offers impressive miles per gallon.

This review was based on a PS4 copy of Trials Rising provided by publisher Ubisoft.

Trials Rising dishes out the tricks we’ve come to expect from the series. Developer RedLynx steps up their level design and delivers more content than ever, but overly-familiar mechanics and unseemly microtransactions make it hard to get too excited about the game. If you’re hungry for new Trials action, this game delivers, but don’t expect it to rise to the occasion if you’re already weary of the formula.