Fantasy settings aren't the most original ones around. Players usually take on the role of the chosen one, having to travel the world to see its wonders and ultimately acquire the power to defeat a great evil that threatens all. Some RPGs tried to spice things up a bit, but very few literally subverted tropes by making players explore an upside-down tower. This is exactly what Tower of Time does. The game developed by Event Horizon cleverly introduces so many tweaks to a classic formula, resulting in a role-playing game that never feels boring or repetitive.

Tower of Time is set in Altara, a world plagued by all sorts of natural disasters which are forcing humanity to abandon the land, resulting in the world's kingdoms getting smaller and smaller. One day, a young boy happens to end up in a very mysterious tower which is, even more mysteriously, upside down. Upon entering the tower, the boy learns of his destiny as the chosen one before being forced out of the tower. Years later, the boy, now a man, comes back to the tower with some help, dead set in exploring it fully and learn the mystery behind it and the reasons behind the decline of Altara.

The story isn't perhaps the most original, but it's quite engaging in the way it is narrated, never overstaying its welcome with an excessive amount of text. The multiple party members are also well-characterized, and their interactions help propel the narrative forward. The unique setting, which combines typical fantasy elements with steampunk and even alien-looking locations, helps quite a bit in making things feel unpredictable.

While Tower of Time's story is definitely more than decent, it's the gameplay experience that stands out the most. Battles in the game are played in real-time, with players having the ability to move their characters on the field and unleash a variety of special attacks which allow them to strike from afar, close-in to the enemy quickly and so on. It's also possible to slow down time, which is quite helpful in the most hectic situations. Battles are fought on specific fields, which has allowed the developers to be quite creative when it comes to enemy placement and victory conditions, making battles feel almost like puzzles. Defeating all enemies is the most common condition, but there are plenty other which require players to think long and carefully about what to do, as it's quite easy to be defeated even on the normal difficulty setting. Losing a battle, thankfully, is not the end of the world thanks to the retry option.

In true RPG fashion, Tower of Time also features a robust loot system. During the course of the adventure, players will gather quite a few items, which can be used in crafting more powerful weapons and armor. Customization is actually one of the game's best features. Not counting items, players can also invest skill points in different skill trees, with each ability feeling quite different from one another. Coupled with crafting, it's possible to create some rather unique characters. It's also quite simple to reset assigned skill points, making experimentation quick and painless.

Exploration is in no way worse than the battle system. The unique setting of the game has allowed the developer to create some rather diverse and well-designed environments, filled with items to find and enemies to defeat. As enemies are all visible on the field, battles don't get in the way of exploration, allowing players to decide if and when to engage them.

Tower of Time's presentation is also very well done for an indie game. Characters and locations are quite detailed, and the special effects showing after using skills properly convey their power. The menu system, in particular, is quite functional and this is no small feat considering the amount of elements players have to keep track of.

Tower of Time is an extremely enjoyable cRPG which doesn't try to revolutionize the genre, but rather enhance it with some interesting tweaks that keep the whole experience interesting from beginning to end. From battles to exploration, there's quite a lot to enjoy for all fans of role-playing games.

Review code provided by the publisher. You can purchase the game directly via Steam. 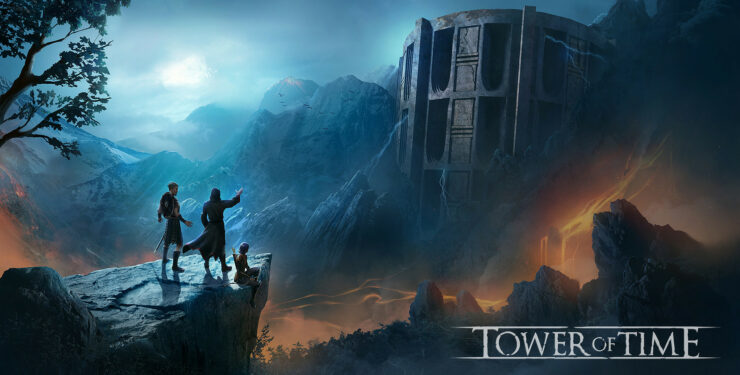 Tower of Time is a rather enjoyable cRPG featuring an extremely engaging real-time battle system and some unusual mechanics, like its leveling system. While the story may not break away from some of the genre clichès, Tower of Time keeps players entertained with its charming characters, unique setting and well-crafted mechanics.