Toukiden 2 Review – A Slayer and His Demon Hand

Toukiden: The Age of Demons was a welcome surprise when it launched a few years ago. Trying to ride the tide of the Monster Hunter series' success, Koei Tecmo and Omega Force released a title that, while inspired by the popular Capcom series, managed to stand on its own thanks to its unique setting and streamlined gameplay features which made it easier to get into than Monster Hunter games, known for requiring a lot of time and patience to finally get going. Toukiden Kiwami, released a few years later, expanded some of its predecessors' features, and Toukiden 2 brings everything to a whole new level, introducing some new features that revolutionize the formula and make the game quite enjoyable.

Toukiden 2 is set two years after the events of Toukiden Kiwami, and ten years after the Awakening, when Oni began flooding the world, forcing the Slayers to come out in the light to fight them. During the battle at Yokohama, the fully customizable main character is mysteriously transported ten years into the future by a powerful Oni, finding himself in the village of Mahoroba. With the help of the Professor, the Automaton Tokistugu, and the local Slayers Benizuki and Homura, the stray Slayer starts to fit in the village, forging bonds that will help keep him in the current era. As the story moves on, the Slayer and his companions will discover the true meaning of the Awakening as well as the secret behind the ruins scattered around the village.

Toukiden 2's story, while far from being original, is actually engaging, thanks to the charming cast of characters that will accompany the player during the 30 or so hours required to complete the main campaign. In a game like this, the story is definitely not one of the main reasons to play, but it provides a good backdrop for all the Oni hunting action players will be doing. 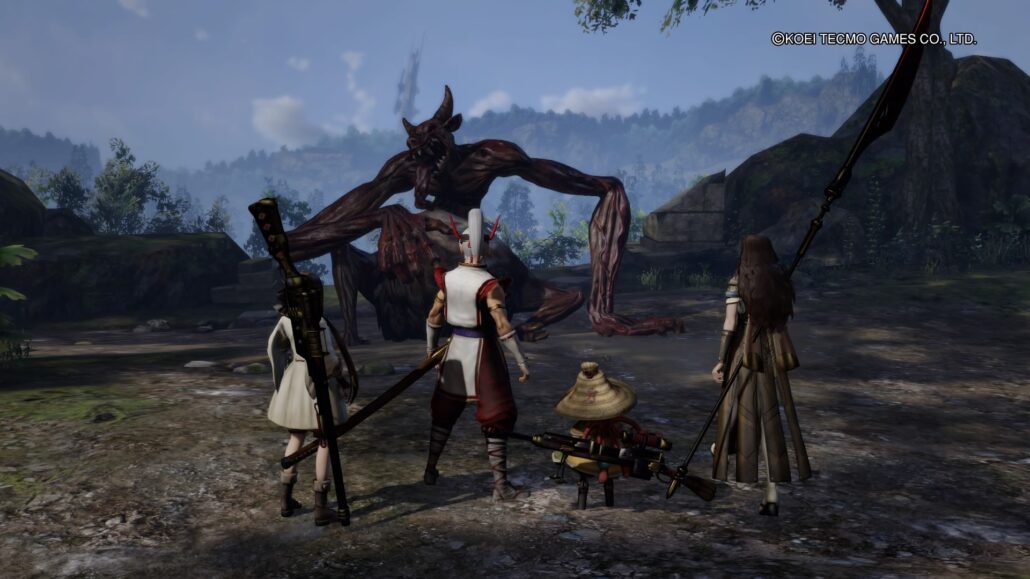 One of the biggest changes introduced in Toukiden 2 is the way players explore the world. Unlike the previous games, where accepting missions transported players in the mission area, in Toukiden 2 players will have the chance to explore a big open world filled with small, medium and big creatures, secrets to find, quests to accept and complete and more. Unlike other open world games, where it's easy to get overwhelmed, Toukiden 2 handles this type of experience in a very interesting way with the introduction of the Otherworld, filled with the Miasma produced by Oni. If the Miasma gauge is filled while exploring this part of the world, the player dies. To prevent this from happening, players can reduce the Miasma levels by killing the powerful Oni that produce it. With these mechanics, players do have a set goal when reaching new areas, which makes exploration more focused and overall more interesting, as wandering around becomes an option only after the Miasma level has been brought down. And wandering around does have its perks, as players can find plenty of materials, optional content that elaborates on the story, and confront different Oni depending on the time of day.

At the same time, Toukiden 2 doesn't completely do away with some of the previous entries' systems. In the main village, players can accept a variety of missions that will transport players automatically to the mission area. Missions accepted in the village can only be completed with the help of AI companions, with multiplayer missions being only available from Portal Stones. The open world segment of the game is locked to single player only, which may not sit well with some, but by playing the game it's pretty clear how this was the only way to go.

Toukiden 2 also expands on the series' combat system in some interesting ways, making it feel familiar and fresh at the same time. Back from Toukiden Kiwami are 10 weapons, with 2 very interesting additions, the Sword and Shield, and Chain Whip. All returning weapons also come with new moves and mechanics, so those who mastered a specific weapon type in the previous games will still find something new to learn and use in battle. Another notable addition to the combat system is the Demon Hand, which allows players to grapple on enemies and objects to move around quickly and unleash powerful aerial attacks. The Demon Hand is also an essential tool while fighting the bigger Oni, as it's possible to interrupt special attacks by using the Hand at the right time. Mitama, the souls of departed heroes, also make a glorious comeback in Toukiden 2, granting players a variety of enhancement, evasive and attack skills which can be enhanced by using the skills repeatedly and by performing specific actions in battle. Mitama also allow players to customize their character, as each one belongs to 11 different types which influence the battle style. With several combo strings and special techniques for each weapon type, the Destroyer attacks, which immediately destroy an Oni body part, skills granted by Mitama and the Demon Hand, there are a lot of combat options in Toukiden 2. Sadly, they don't prevent it from becoming stale after a while. 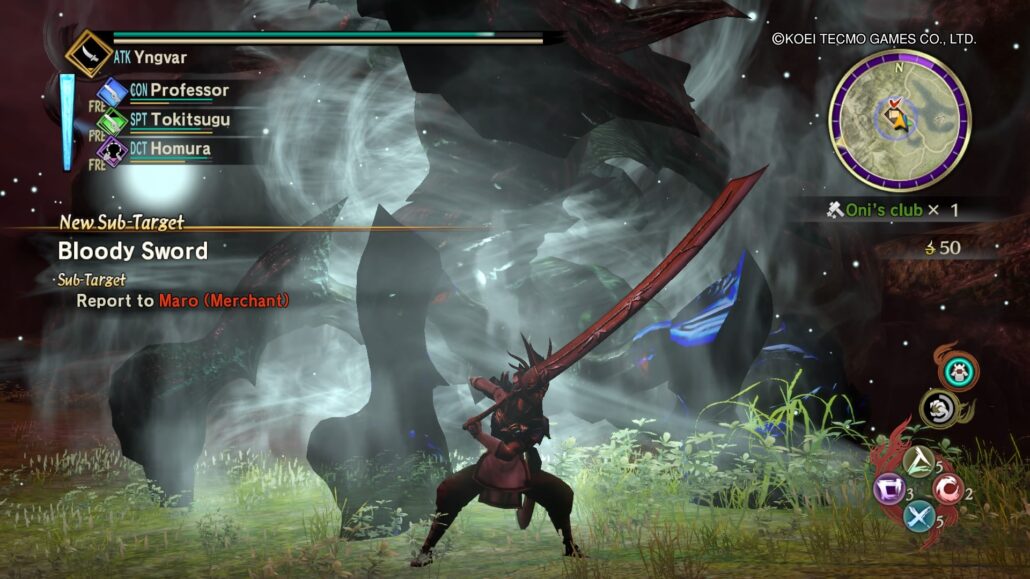 Being an Omega Force developed title, it's not surprising to see how button mashy things can get in Toukiden 2, even against the most powerful Oni. Sure, players can try to play in a smart way, focusing on Oni limbs and other body parts to make the fight easier, but when mashing through fights is a valid option most of the time, one has to wonder if it's worth it to try and play the game differently. Some of the fights are challenging enough, that's for sure, but the majority of them just require players to relentlessly attack Oni until they are dead, something that might trivialize many of the interesting mechanics found in the game. Switching weapon type frequently can make combat less boring, but it still doesn't change the fact that button mashing is a viable option most of the time.

Despite this, it's undeniable that there's still a certain satisfaction in defeating Oni, as they drop items that can be used to  creating new weapons and armor, giving players more incentive in venturing out in the wild, especially if they're planning to show off their gear in the multiplayer mode. Obtaining materials is also made easier by yet another new feature, which allows players to send a fully customizable Automaton out in the world to collect items.

Having also been released on PlayStation 3 in Japan, Toukiden 2 isn't the best looking game around, but it still manages to look nice on PlayStation 4, with bigger Oni models looking fearsome with plenty of details. Environments, on the other hand, have a generic look to them that cannot compete with games like Horizon Zero Dawn and The Witcher 3. Performance is solid, with the game running at steady 30FPS even in the most chaotic sequences, but a higher frame rate would have been preferred. Music, sound effects, and Japanese language only voice dubbing are also appropriate, but hardly outstanding. 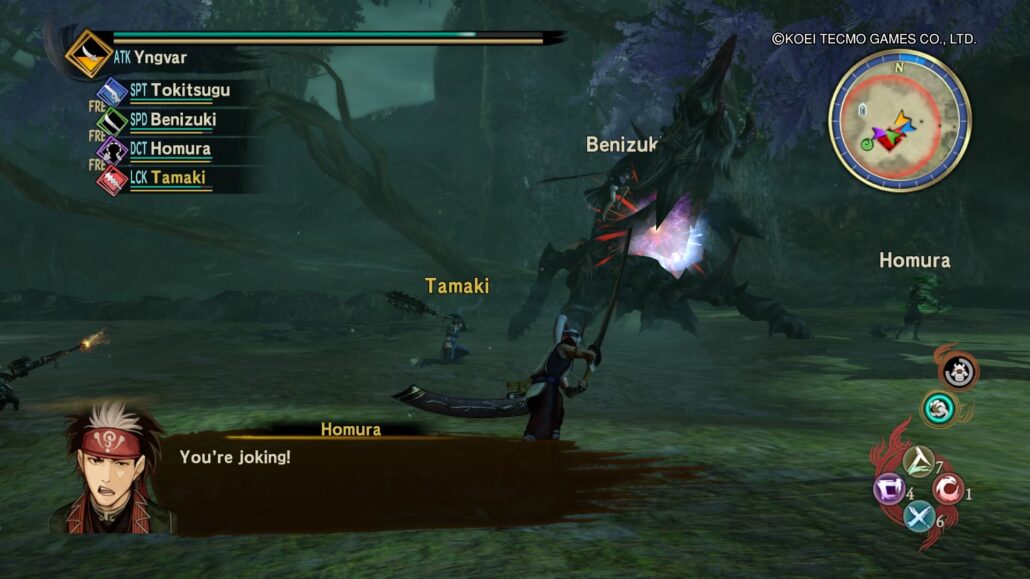 Toukiden 2 improves upon its predecessors in every possible way, introducing open world exploration which works incredibly well and new combat mechanics. With many customization options, weapon types, skills and more, there's quite a lot to keep players entertained for a long time, granted they can get past the button mashing nature of the combat system, which becomes somewhat stale after a few hours. Even without these issues, however, it would have been difficult to recommend the game wholeheartedly to anyone outside of fans of the series, as recent games like Horizon Zero Dawn, Zelda: Breath of the Wild, Nier: Automata and Nioh all do open world, combat, and story much better than Toukiden 2. It's a shame, because the Omega Force developed title is, without a doubt, a very solid game: it's just releasing at the worst possible time.

Toukiden 2 improves pretty much on every feature of its predecessors, with an interesting approach to open world gameplay, a good number of customization possibilities, an engaging story featuring a charming cast of characters, and plenty of intense action. Sadly, combat tends to become a bit stale after a while in single player, as good equipment and skills allow players to just mash their way through the hordes of Oni infesting the land. Toukiden 2 is, without a doubt, a quality title and the best entry in the series, but with other recent games delivering better open world design and combat it may be difficult for some to be enthralled by the Omega Force developed game.