I've likely mentioned it a few times in the past, but if there is one game that has a place in my heart, it's Rome: Total War. Well, Total War: Rome Remastered, as it's now known. Total War is arguably the biggest strategy franchise around, so it makes sense for all the titles to be placed together in the alphabetical drop-down ordering of life. Shogun was popular, as was Medieval. Rome was the game that truly set the series going.

Rome was also the game that converted me to PC gaming. I remember watching Time Commanders when I was younger, and I loved the look of it. I then saw Total War in some form of paper-style binding that was covering video games. I had played games on the PC before that, quite a bit, but I was done. I bought Rome: Total War. I couldn't play it; I was unhappy. I asked my uncle why and he told me that it was because I didn't have a graphics card or not one that could run the game. I got a graphics card, and my conversion to the master race began.

Persona 3 Remake Development Is Far Along; To Be Revealed This Summer – Rumor

Why am I telling you this? That's because I want to make it clear that I have a love for the original. In fact, it's a love of the series as a whole. A love that has seen me play the previous eleven Total War games on the day of release (or earlier in the case of my reviews of the previous five releases). It's also one that I won't hide and one that had undeniably had an impact on my review of Total War: Rome Remastered.

The one interesting thing about reviewing a seventeen-year-old game that acted as the launchpad for eleven games is looking at how so many refinements began and what has changed. You feel like a video game archaeologist, looking at things from the ancient world and being able to point out the changes. Rome: Total War, for example, was very different from more modern titles in several ways. Every city you conquered, you could build everything. They could all be military, economic, and sociological powerhouses. This was, naturally, unrealistic - though the argument that the city represents a whole region is a fair one.

You also find, playing Total War: Rome Remastered, that Rome was one of the earliest strategy titles to incorporate world-changing story elements, even ones that could fluctuate when they occur in the game. The Marian Reforms, for example, fundamentally change the structure of your armies but only occur when the first Imperial Palace is built by one of the Roman factions. Other random events like the eruption of volcanos, a city being riddled with plague, and more made Rome the gold standard that influenced so many others.

Then you bring in Barbarian Invasion and Alexander, two huge expansion packs that influenced future titles, such as Barbarian Invasion influence on Attila and Alexander's approach clearly influencing titles like Thrones of Britannia. This is one of the most pro-consumer remasters I've ever seen, particularly since those who own the original get this for half price and even those who can fish out their old copies and add the CD key to Steam.

Let's talk about improvements. Throughout the package, the game has had a huge visual overhaul. It now runs in 4K. Unit models, buildings, terrain - everything in the game has been brushed up, looking to bring it closer to modern games. That also includes smoother animations, improved lighting, shadows, and destruction visuals. Now, it is only a brush-up. On the battlefield, units don't have the fidelity you'd expect of more modern titles, but I can understand and appreciate that.

Outside of the visuals, Feral Interactive hasn't just decided to keep the game as it was. Several elements have seen improvements, borrowing from later titles. For example, the merchant agent from Medieval II: Total War has been added to Total War: Rome Remastered, allowing you to set up specific trade routes or take advantage of resources seen on the main map. It allows you to increase your income and monopolise some resources, cutting off your enemy's access.

Many improvements have been about improving the quality of life too. The camera has been brought up to modern standards. If you want to jump into the game and play as any faction, that is an option - or you can still go by the rules of the original, unlocking them by defeating them. In your campaign, issues around squalor have now been capped, provided you have the remastered settings turned on.

Honestly, the list of improvements is far too big for me to cover in one review. This is partly because there are so many, and partly because many of them impact smaller areas, but all work together in a fantastic example of synergy to bring Total War: Rome Remastered a little closer to a modern release, albeit not exactly to the same level that you would even find in titles like Total War: Rome II once Creative Assembly fixed it.

Also adding to the atmosphere is the game's improved audio. While I don't think it's been remade, the excellent soundtrack certainly has the original music in a much higher quality format. Even the audio around the battles, and the excellent speeches of the generals before, seem to sound crisper and clearer than ever before. It's these little things that nudge a game like this up another level.

Just to further nudge Total War: Rome Remastered up that bit more, the UI has been overhauled to be far more user-friendly than the original. Flicking through menus, getting the information you need about your family tree, the senate, your income and expenditure - anything - is much easier to reach and understand. Moving around, seeing what you want to see, building in cities and raising your armies, it's approachable and learns from what came after this. It makes it far easier to play.

Now, I'm not going to say that Total War: Rome Remastered is without its flaws. Many of them come from the original release and have been all but fixed as the series has developed. The AI, for example, is still pretty damn stupid. In and out of battle, it's far too easy to manipulate. However, maybe I'm overly kind, but I don't honestly expect them to make a new AI. It's a remaster, not a remake. I should clarify that it has been improved, though, just not to the level of more recent titles.

Another issue is with pathfinding and unit placement. Again, it's due to inevitable comparisons that it sticks in my mind. When you're fighting in a city, it's baffling that the units won't simply cut across a bit of grass; rather, they'll walk an extra, valuable, thirty-plus seconds so they can stick to the bloody paths. I've also had units just not wanting to listen to my orders, or they won't get in a line as they're meant to. I could be generous and say that's because they were so eager for battle, but no, it's not - it's just a few issues with how a single part of that unit interacts with the map.

Finally, and this is a minor one, but I've had a few technical issues. I've had the game crash on me five times. Now, five times in about forty-five hours, I can live with that, especially since the game does autosave at regular enough intervals that I lost about thirty minutes, at most. Another slight technical issue is that the game seems to have a bit of a memory leak. Maybe it's due to my mammoth sessions, but twice I've wondered why the game would grind to a halt before just cracking on and acting as normal like it had forgotten how to work. That's when I noticed it using 5.5Gb of RAM.

For the most part, it's silky smooth and plays fantastic, but I just thought it pertinent to mention the few technical issues.

Rome: Total War is still a fantastic strategy game. It's still one of the best games ever made, looking at games as a product of their release date. Yes, the original hasn't aged as well as could be hoped, and it has been surpassed by titles like the unassailable Total War: Three Kingdoms, but it's still a great game. Total War: Rome Remastered looks to bring that history and elements that made it such a massive release to a new audience, even if it lags behind its offspring.

In the words of the above general, ready to fight to defend Carthage against the Numidians, "today we are here to kill all these bastards". Simply put, Total War: Rome Remastered gives you a bloody good time killing all of the bastards, be they Gauls, Britons, Romans, Numidians, Iberians, Carthaginians, Greeks, Egyptians, and anybody else stupid enough to get in your way. The Barbarians Invasion and Alexander expansions only extend this fun in interesting ways that are worth exploring to this day. 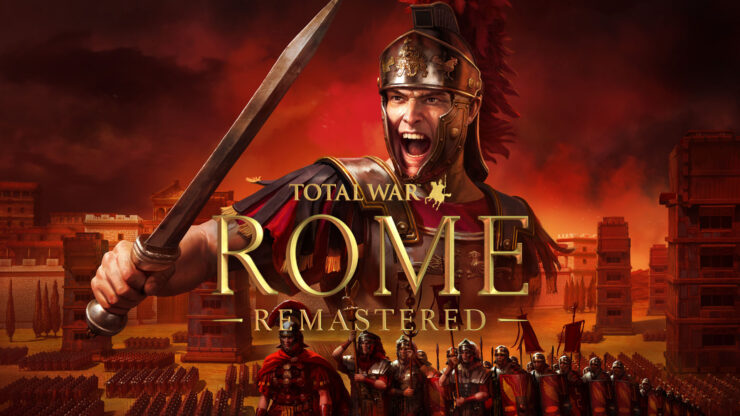 Total War: Rome Remastered is a great remastering of one of the most influential and important strategy games in the history of gaming, though it is warts and all. Certain improvements are invaluable in bringing the original closer to modern sensibilities, though they only go so far, allowing issues like pathfinding to remain, as well as a dense-as-concrete AI, even though it has been improved. However, no matter the issues, the gameplay is engaging, exciting and most of all, fun. This is a massive game, featuring two extensive expansions that have also been remastered, and one that I would recommend to any fan of the original, any fan of Total War and anybody who wants to ease themselves into the series with a game from simpler times.

Like A Dragon: Ishin! New Trailer Focuses On Farm Life