Torment: Tides of Numenera Review – The Tides Have Shifted, And So Has The World

Planescape: Torment may not have been a commercial success like other CRPGs released in the 90s, but its influence on the genre as a whole is unprecedented. Thanks to its outstanding writing, story and unique approach to role-playing game mechanics, the game developed by Black Isle Studios is rightly considered a cult classic, and a game that still has a lot to say even after almost 20 years since release. For this reason, inXile Entertainment's job in giving a worthy spiritual sequel to Planescape: Torment with Torment: Tides of Numenera was no easy one. The team, however, exceeded expectations, creating a game that's more than worthy to be mentioned alongside the cult classic, offering a role-playing game experience that's markedly different from most of the RPGs on the market.

Torment: Tides of Numenera is set in the incredibly interesting Numenera setting, a setting that allowed inXile to go wild with their creativity, creating a world that's vibrant, alive and rich with a history spanning thousands of years.

In the Ninth World, humans and other creatures live in a roughly medieval state, surrounded by relics of the previous eight eras called Numenera which function in ways beyond human understanding. In such a world acts the Last Castoff, the final vessel of a capricious ancient human being known as The Changing God, who managed to find a way to leave his physical body and be reborn in a new one, achieving a twisted sort of immortality. This achievement, however, came with a price, for, once he moved from a vessel, it started developing a conscience of his own. In the beginning, the ancient man treated his vessels like children but eventually started treating them as mere tools, discarding them when their usefulness ran out. As an even worse consequence, his actions awakened the mysterious being known as The Sorrow, which seeks to kill The Changing God and his creations. As the final vessel of The Changing God, the Last Castoff will have to confront The Sorrow, who has invaded his consciousness, and only The Changing God himself can help him overcome the mysterious creature. The journey to find The Changing God is a journey that will lead the Last Castoff to understand the reason behind his existence while meeting so many people and influencing so many lives that the world will never be the same again. 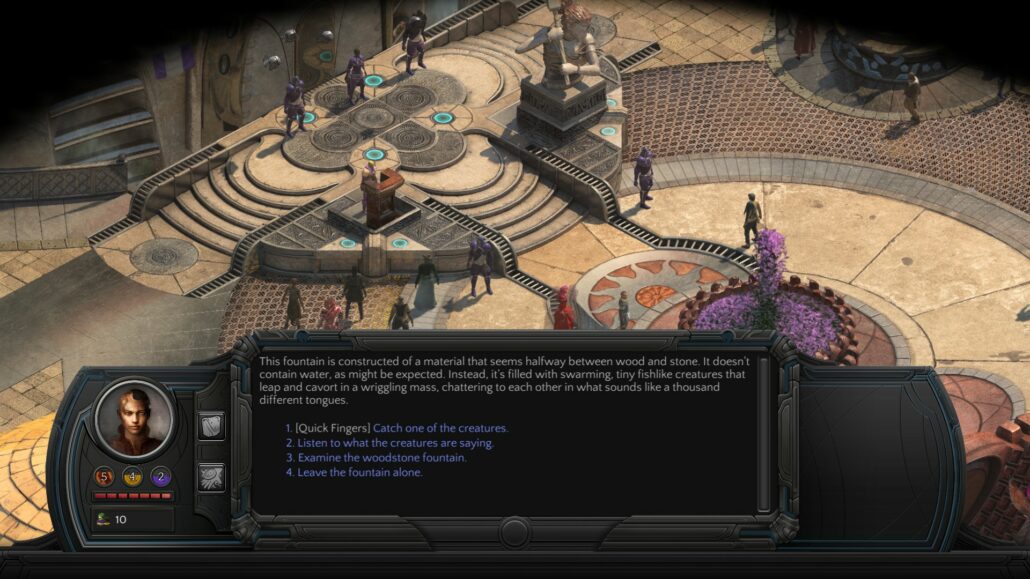 Being a spiritual sequel to one of the RPGs featuring the most text, it's no surprise that Torment: Tides of Numenera is not that different. Most NPCs can be talked to, and many of them can offer advice, new quests or simply information regarding the Ninth World, its history, and its inhabitants. Writing is undoubtedly superb, with all characters, including the party members, speaking with a distinct tone which highlights their uniqueness compared to the rest of the world, and makes lines upon lines of dialogues never tiring. Playing through Torment: Tides of Numenera is like reading a well-written book: it sucks players into its world and keeps them so interested that they want more, and more, and more. It's not so uncommon to be so engrossed into a secondary questline to completely forget about the journey to find the Changing God and banish the Sorrow from the Last Castoff's consciousness. Some of these secondary quests, like the one starring the Crippled Foremen, are so well written that they make players think about some rather deep matters. This is a testament to the writers' excellent job, who managed to take advantage of the Numenera multiverse in the best possible way to create an incredibly colorful and enthralling world that feels engaging even when trailing off the main quest.

While the game is certainly well written, it's undeniable that some might find the writing a bit excessive, as even the most simple action is described with an abundance of words. In Torment: Tides of Numenera there's definitely more reading that acting and some might not exactly like this approach. All this reading does a solid payoff, but the ending comes a bit abruptly, with too many important revelations in the final few hours that might have been more impactful if they had been spread better.

Like its spiritual predecessor, Torment: Tides of Numenera is a game where the player has real agency and the power to influence the world with choices. At pretty much every turn, players will have to make different choices which can potentially shift the Tides, unseen forces that affect all the inhabitants of the world, the game's unique take on the typical RPG morality mechanics. Like Planescape: Torment, the Tides don't lock players out of content due to their alignment, only influence the way NPCs look and react at the Last Castoff. Some dialogue choices are only available with specific dominant Tides, but there's always a way to complete a quest or obtain what's needed to complete one even with select choices not being available. Some choices are also dependent on Stats pools, a gameplay mechanic which ties everything together nicely. The power of choice in Torment: Tides of Numenera is so strong that even failing quests can lead to other interesting possibilities. As such, a single playthrough is not enough to see everything the game has to offer. At the same time, such a humongous amount of possibilities can feel a tad overwhelming, despite the game doing its best to explain all of its intricacies. 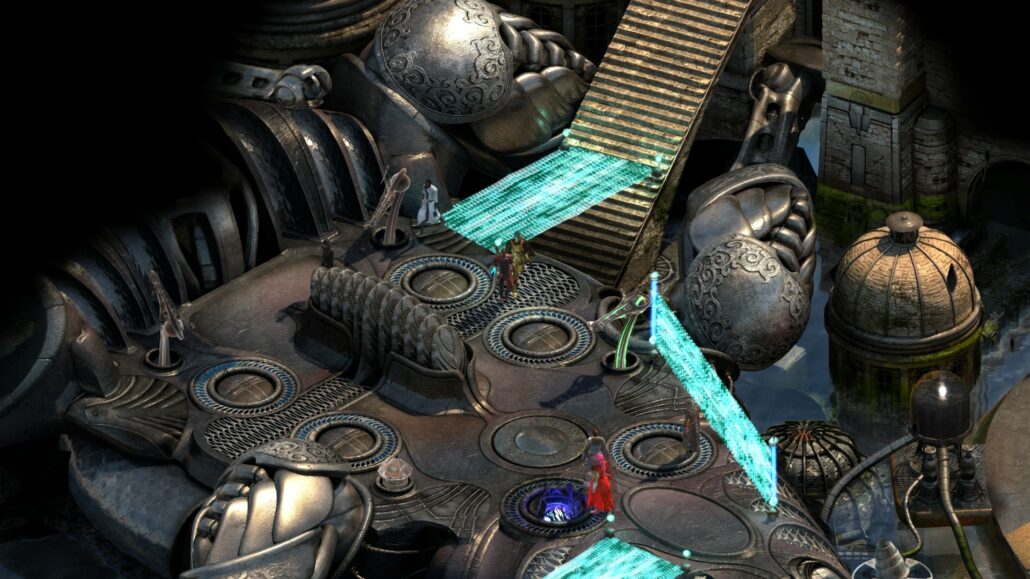 The Torment: Tides of Numenera RPG mechanics are, without a doubt, nicely crafted, and they complement the gameplay experience well. At the beginning of the game, players will have to define the Last Castoff with by answering to a variety of questions, choose their class between Nanos, sorcerers, Glaives, warriors and Jacks, who can use every weapon, armor, and esotery, and choose between a variety of skills. Before finalizing their creation, players will also have the ability to change some of the choices they have made. Frankly, the Torment: Tides of Numenera character creation process leaves something to be desired, as players can customize their character in a limited amount of ways. Once the Last Castoff has been defined, players will finally be able to venture out in the Ninth World, where they will have to use points from the Stats pools in battle and during exploration, resources that allow players to activate abilities, increase damage and accuracy of regular attacks in battle and increase the chance of success of several tasks.

What makes Torment: Tides of Numenera feel unlike any other role-playing game on the market, other than Planescape: Torment, is the game's unique approach to combat. Most, if not all battles, can be avoided entirely by mediating with the opponent, use the environment to one's advantage and more. Honestly, avoiding fights by making the correct choices feels more satisfying than actual combat, also considering players are awarded XP by picking select choices during dialogues. This is not to say that combat is not well done, but as a regular turn based system where player and enemy teams take turns to move and execute actions is employed, it's somewhat more exciting to be able to avoid fighting altogether. It takes skill, in a rather unusual way.

Despite being a turn-based combat system without any truly remarkable twist, there are still some interesting mechanics at play. As already mentioned, on their turn, players can move their characters and make them perform an action. Each character comes with his or her own set of skills, which can be upgraded for increased effect, so creating a balanced party is important to survive the most intense confrontations. A very interesting feature is the ability to use Cyphers, relics from the past ages like the Numenera, which can be activated without requiring points from the Stats pools. As most Cyphers are quite powerful and can turn the tide of battle in an instant, there's a limit on how many can be carried by a single character without huge penalties. While not exactly revolutionary, the Cyphers mechanics add some welcome strategic options for those who like battling enemies. 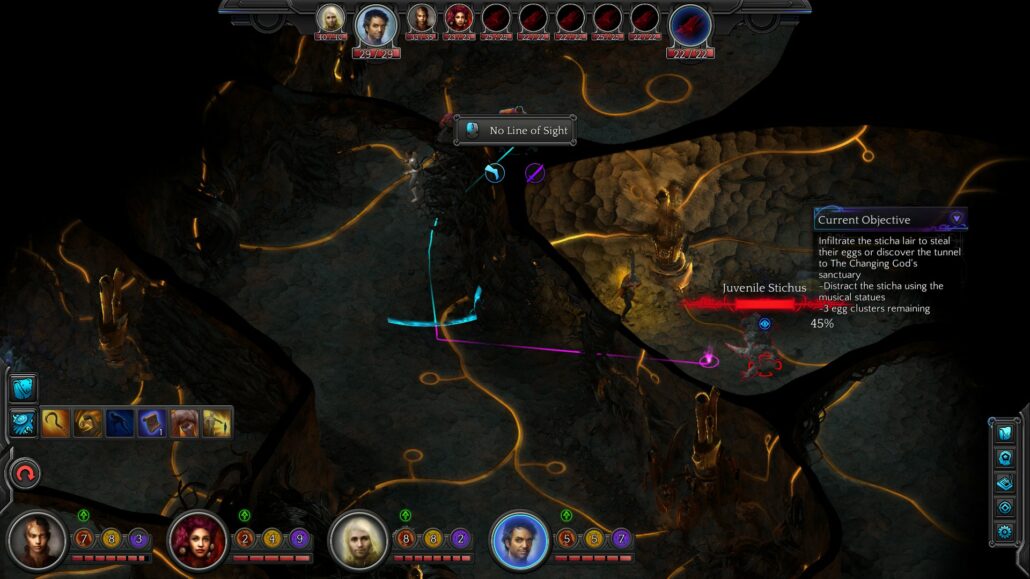 Torment: Tides of Numera doesn't just play nicely, but it also looks good, with its presentation complementing writing and gameplay well. All locations are highly detailed 2D backgrounds with several animated objects that bring the world to life. Characters are also quite detailed, especially the recruitable companions, who all have peculiar traits that make them instantly recognizable. The soundtrack also enhances the atmosphere considerably, with voice acting for during select scenes making the game feel more immersive than ever.

Torment: Tides of Numenera on PC runs well for the most part, and should do so even on older machines as its system requirements aren't particularly high. Sadly, there aren't that many graphics options, so players have very little customization options in this regard. Mouse and keyboard controls are fine as expected, but the lack of controller support, at least for now, is definitely annoying, considering the game is releasing on consoles at the same time.

Torment: Tides of Numenera is truly a one of a kind RPG that can only be compared to another one of a kind RPG, Planescape: Torment. The game developed by inXile manages to bring the legacy of its spiritual predecessor into the modern era, offering an intricate world, an engaging story and a gameplay experience unlike anything else on the market. The Changing God may be a ruthless individual, but his vessels have given us a gift that will stay with us for a very long time.

Torment: Tides of Numenera is a role-playing game like very few others, giving players total freedom in how to approach any given situation, even allowing them to complete the game by avoiding most fights through this deep choices system. With excellent writing, lively and creative world, engaging story and characters, and solid mechanics, the role-playing game developed by inXile is a game that those who love immersing themselves completely in fictional worlds have to play at all costs. Giving justice to the Planescape: Torment's legacy was a very difficult task, but the team proved that they were more than up to the task, creating a game that builds upon this legacy with the utmost respect, despite some small issues which don't impact the game too much.