The government has fallen, a Green Plague has wiped out most of the country and knocked out critical infrastructure, and those lucky enough to keep their lives are stuck rebuilding the country after a near apocalypse. Not long after the events of the first game in the series, Tom Clancy's The Division 2 sends division agents to the nation's capital to help retake The White House and reestablish some sort of control in an area overrun by various factions of thugs and PMC's. But when your core focus and driving motivation is to shoot guns to get better guns, the story is just some fancy window dressing to give the player a tiny bit of backstory before clearing out an enemy control point.

For as many loot-and-shoot titles are on the market these days, none match the tactical focus of Tom Clancy's The Division. Enemies are often greater in number and wielding much stronger firepower than the few Division agents left to protect Washington DC, so cover and tactics are of great significance. Thankfully the country's capital is filled with waist-high walls and barricades that can stop the incoming enemy fire. The cover system has been slightly overhauled since the first The Division title and popping in and out of cover is usually pretty seamless. A new autorun feature lets players target a location they'd like to move to and with the hold of a button, will automatically hustle to the new spot. At times, this can be finicky to get angled on the correct side of a barricade; in the midst of battle, I've accidentally locked onto an exposed side of a parked car and wound up leaving my flank completely exposed to a shotgun-wielding enemy that casually strolled up while I wasn't paying attention. Ah, at least you can be revived by your teammates even after you collapse and your respawn timer runs out. 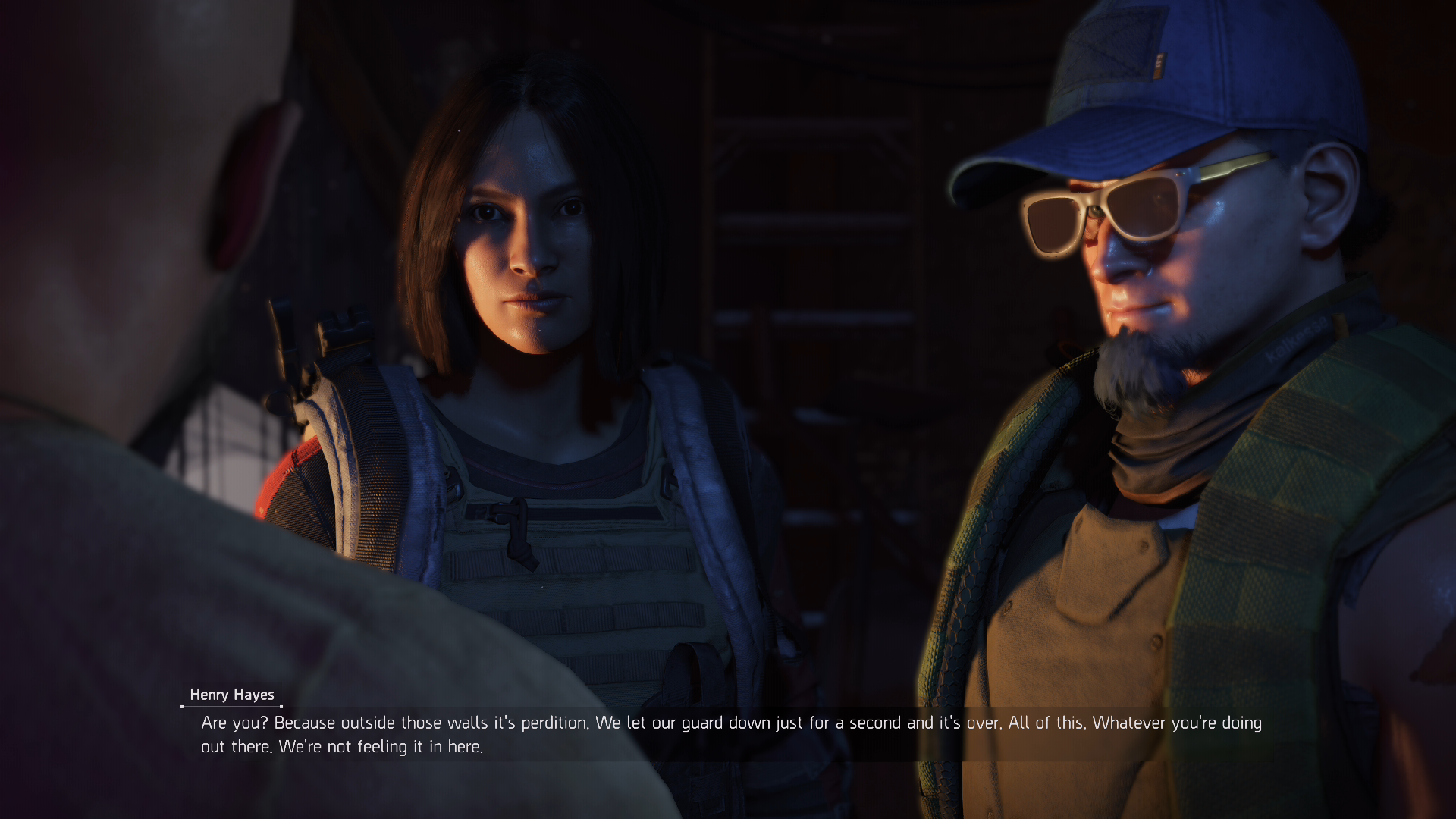 The Division 2’s story largely undervalues the setting, instead using the backdrop of The Oval office and the rest of Pennsylvania Avenue as merely a new venue of operations rather than trying to regain what was lost in those seven months since the Dollar Flu struck Manhattan in the first title in the series. What could have been an excellent opportunity about seeking a potential recovery of the government or infrastructure that’s all but lost. After all, the President was presumed to be KIA, the Vice President committed suicide shortly after the outbreak, and whatever remaining pockets of House leadership are nowhere to be seen in the streets of Washington D.C. For a title that strives to be as apolitical as possible, it’s a strange world to live in where there’s not even a single mention of The President’s political party. 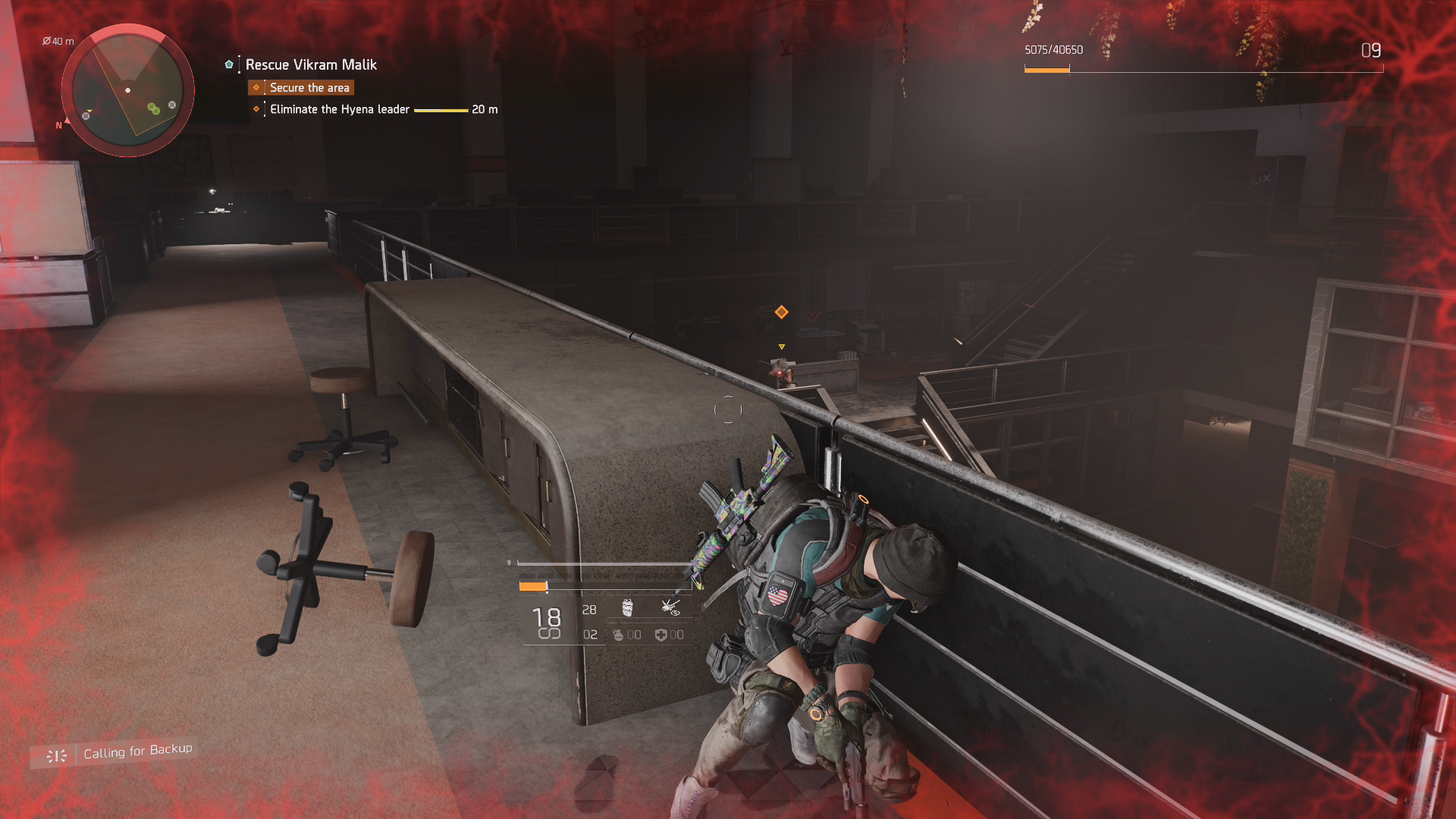 What story there is to tell in Tom Clancy’s The Division 2 instead focuses on recruiting and rebuilding your Base of Operations, namely The White House to start and branching out into a couple of others as The Division gets a foothold in Washington D.C. Every story mission you do contributes to these communities, whether it’s rescuing a person of interest or bringing back materials that can help these communities flourish. Some of the more interesting story threads never really pay off or lead to anywhere by the time the player reaches level 30. Collectibles again tell a more interesting story than what motivates the player to clear out a sports arena of enemy combatants for the third or fourth time. The first title in The Division series felt like it was more focused upon the origins of what brought modern civilization to its knees: Green Poison, the Dollar Flu, DC-52, whatever hip names such a horrific event goes by. By the time your activation comes around to defend Washington D.C., the destruction has already passed the worst parts and the story is focused upon those select pockets of resistance and rebuilding. 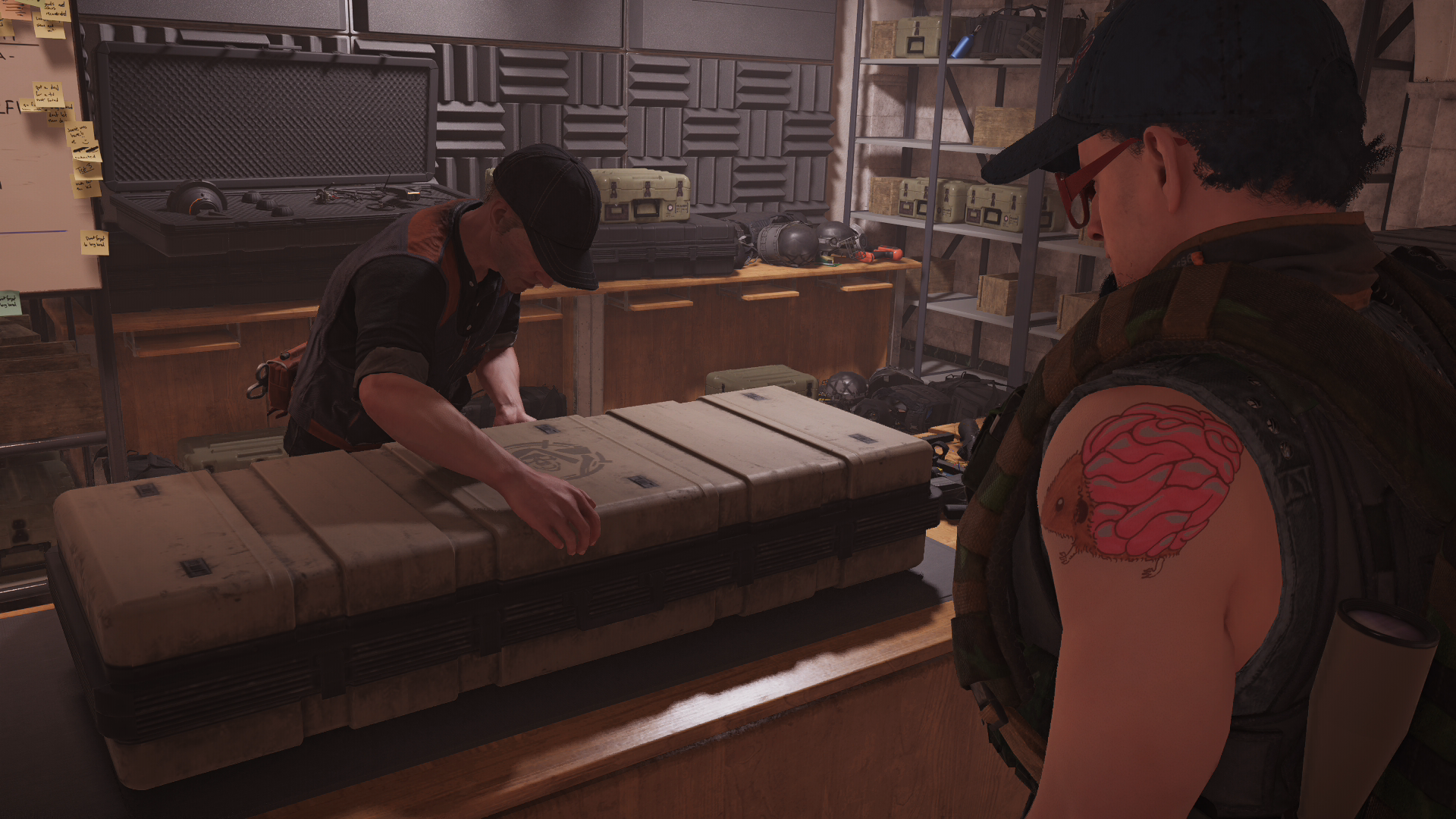 So, you’ve wrapped up the twenty or so main missions in The Division 2 and clocked in thirty hours and thirty experience levels. What comes next? This time around, Ubisoft Massive has pushed their primary focus of character progression into the endgame content. By the time you’ve saved Washington DC and cleared every enemy Stronghold, you’ve only breached the tip of what an Agent of The Division can be expected to perform as part of their regular duties. Those story and side missions you’ve already cleared once are remixed in various ways by bringing in new enemy types and factions. A whole PMC corps known as the Black Tusks moves into the DC area moments after you clear the last story mission. This opens up a slew of new progression paths and unlocks a new leveling system known as World Tier, or WT.

Players start out their journey once they hit level 30 in the first WT with a new goal in mind: find stronger gear rated with a higher Gear Score number and clear out more enemy strongholds. It’s a new grind that isn’t nearly as bad as the likes of other loot ‘n' shooters such as Destiny if only for the simple fact of how generous the loot drops are in The Division 2. Crossing into the next World Tier requires getting your gear score up to a certain average, which can easily be accomplished through the generous treadmills of fresh loot, whether you’re finding it scattered throughout the world, rewarded by completing remixed missions and strongholds, or by dipping back into the Dark Zone. 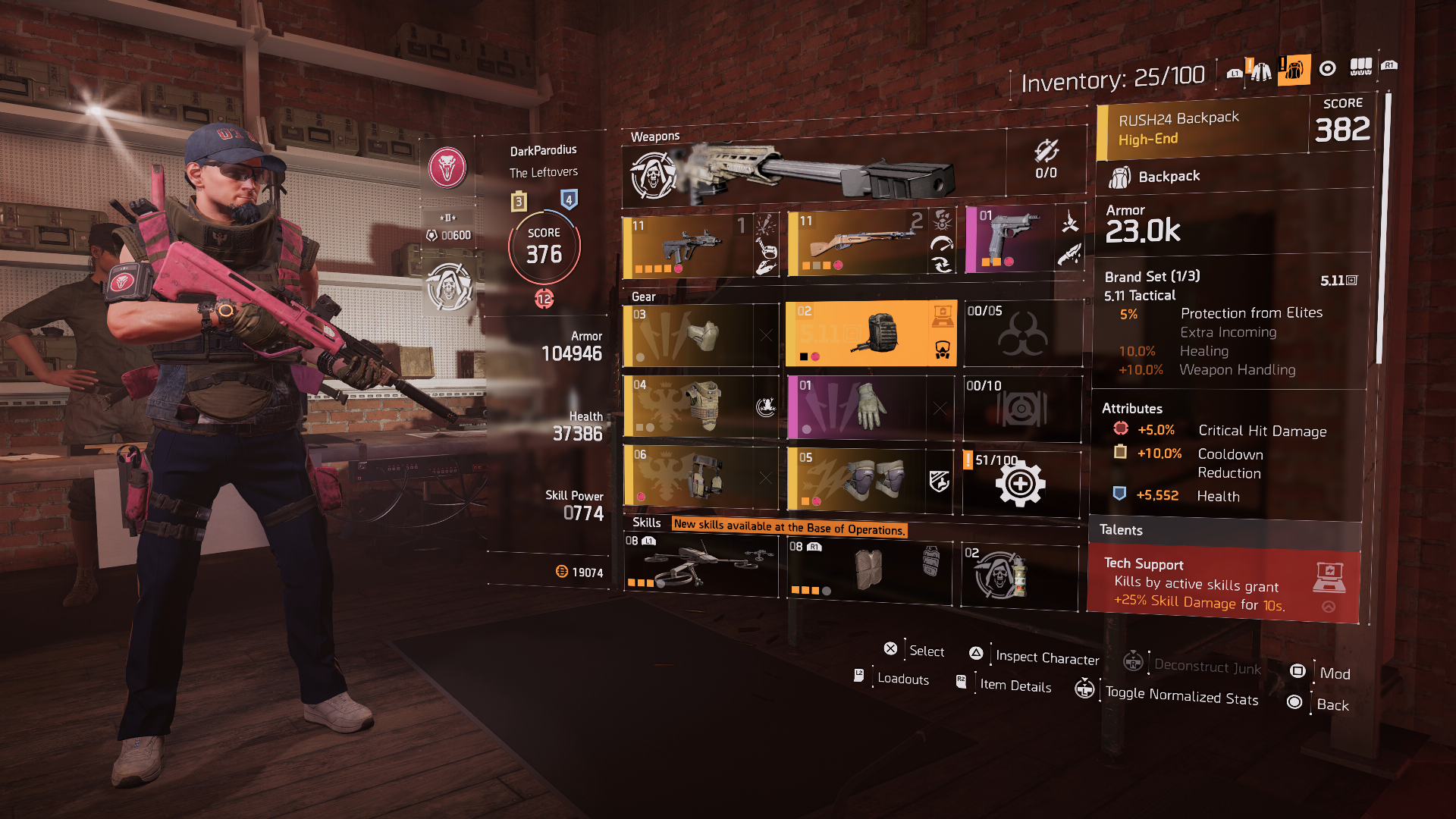 Newly recruited agents for The Division have two flavors of player-versus-player action to satisfy their competitive cravings. The traditional PVP mode, Conflict, pits two teams of four agents against one another in the usual takes of Skirmish (Team Deathmatch) and Domination (Capture and Hold control points). No matter your gear score or loadout, stats are normalized across all characters to give everyone a somewhat fair chance on the mini battlefields. This only truly matters to the guns and armor you wield, as those that have access to talents and specializations at max level will be able to carry those abilities over and have a distinct advantage over those just entering DC for the first time.

The Dark Zone once again returns in The Division 2, bringing with it that unique mix of PvPvE that players will wind up feeling strongly for one way or another. That sensation of meeting up with another player, clearing out an enemy stronghold or two, gathering up some contaminated gear, and making a break for the evacuation point is truly something else. All the while, you're playing under the constant fear of when your partner might go rogue and take you out in hopes of gathering up all of the loot for themselves. I played on both sides of the field during my time in the dark zone and The Division 2 certainly feels more in tune with those that want to play the antagonist.

Performing rogue actions like hacking into the SHD network or breaking into a supply cache will make you more of a target for other players, but also give you greater access to contaminated gear. This is the sort of equipment that has to be taking to a helicopter meeting point and airlifted out of the dark zone before it can get used. Of course, bringing in the chopper will alert everyone in the area that there's a walking loot pinata in the area. For a solo player, there's nothing more frustrating than finding a fancy new gun and getting taken out by a group of rogue agents just as you're about to get it extracted. However, despite the constant fear of being double-crossed, the dark zone remains one of my favorite experiences that's unique to Tom Clancy's The Division 2.

What isn't a part of the experience that I enjoyed in The Division 2 are the multitude of bugs and glitches that pop up throughout. It's rarely the same instance twice, either; loops of trying to climb ladders, enemies appearing out of nowhere and blasting me in the face, empty loot containers, et cetera. Perhaps the most obnoxious bug of all was trying to use a character skill, like dropping a turret or healing drone, only to have the skill get cancelled and hit a fifteen-second cooldown. If you're expecting that bonus healing to keep you alive in a boss fight, having those valuable skills break down can be immensely frustrating. This particular bug wasn't present when I start my review of The Division 2 and disappeared a few days later, but even last night as I was gearing up to enter WT3 for the first time, I had it happen a couple more times (although far less frequently).

The shooting and looting of The Division 2 each are strong enough on their own that a lackluster story and proliferation of glitches aren't enough to sour this trip to America's capital for a bit of R&R in the Dark Zone.