ToeJam and Earl: Back in the Groove

I’ve been in love with roguelikes long before I had even heard the word. They can be something often overlooked that very few can get behind but almost always guarantee fun gameplay, challenging obstacles and scaling difficulty and that is exactly what you can expect from ToeJam and Earl: Back in Groove. Hearing that a relatively unknown team at HumaNature Studios (I knew the three-person team from Doki-Doki Universe but not much else) was wanting to bring those funky adventures onto a new console generation without losing that ’90s aesthetic was something I’ve been wanting to get my hands on ever since the Kickstarter first launched back in 2015. Now onto the game and what makes Back in the Groove worth making the return trip back to Earth for. 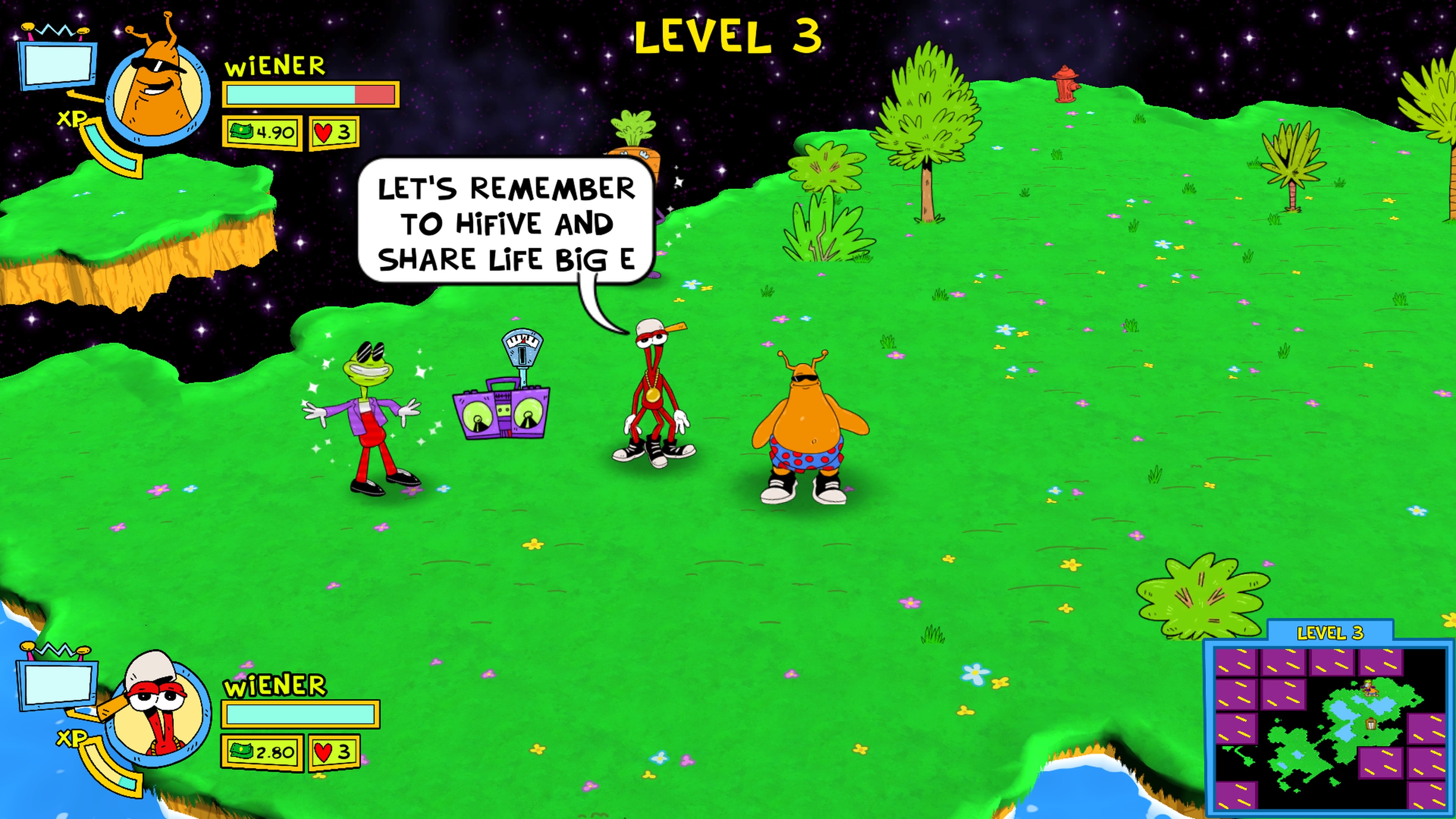 Toejam and Earl: Back in the Groove kicks off with a bright and colorful logo before introducing you to our heroes and the cutely animated story. The story begins with ToeJam and Earl piloting the RapMaster Rocket that they borrowed without asking back to Earth so ToeJam can impress his lady friend Lewanda while Latisha remains unamused. As they approach Earth, Lewanda comments on how silent it is so ToeJam and Earl crank up some funky beats. Toe Jam then asks for Earl to turn on the auxiliary subwoofers to really shake things up, and with some humorous misdirection, they accidentally launch the Black Hole Generator sending our heroes and Earth into the void only to them have it rip the rocket into pieces and scatter it as our heroes get spat out onto one of the many platforms Earth got split into.

Despite being a roguelite, ToeJam and Earl: Back in the Groove is simple to learn and easy to pick up and play for various periods of time. You’re tasked with collecting all the pieces of the ship with no time limit. This gives you the freedom and time to play at your own pace with the ability to save whenever and wherever. You start off on a little island like the first game where there are a few random presents to give yourself a headstart and a few things to explore and interact with. Each Alien that you start to play with (six at the start with three more to be unlocked each time you complete the game) has their own starting loadout of stats, starting presents, and passive abilities to help them survive the randomized landscape. As you level up thanks to a certain carrot-shaped NPC, those stats will improve and give you more of a fighting chance to make it deep enough to collect all ten broken pieces of your ride home. 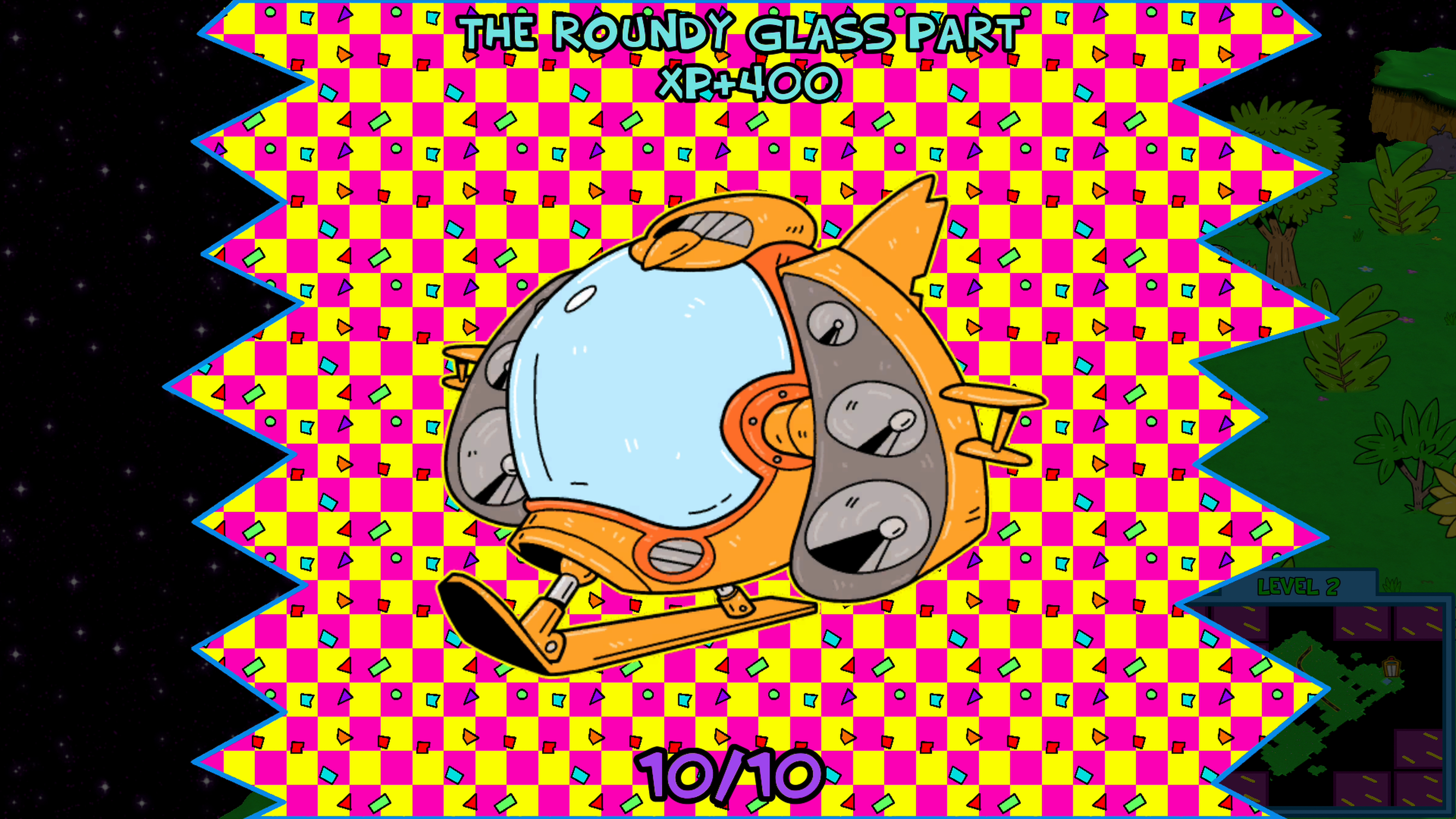 Presents are random abilities or even items given to you through NPC interactions, exploring, shaking trees and more that all hide their true uses until you unwrap that particular good for the first time. More often than not, given how random the presents are in each round of Back in the Groove, these presents will backfire and give you a temporary status effect like uncontrollable gas or a perpetual raid siren that brings every Earthling in the area to you. Some enemies will attempt to steal your presents and sometimes your presents will be the only way to fight back. The true challenge is securing all ten pieces of the Rapmaster Rocket without opening up a single present.

The Earthlings that aren’t out to wipe out the funky alien stowaways can often be your only friends across the various levels of Earth. Aliens that challenge you to breakdance, a wiseman in a carrot costume that levels you up to new social ranks (from cabbage to poindexter to playa and beyond), and an Opera singer that can clear the screen of the harmful Earthlings can all have their services temporarily recruited for a few dollars. These interactions with the remaining Earthlings can be some of the most charming moments about Back in the Groove just as long as you remember that only the ones that sparkle can offer you beneficial boons. 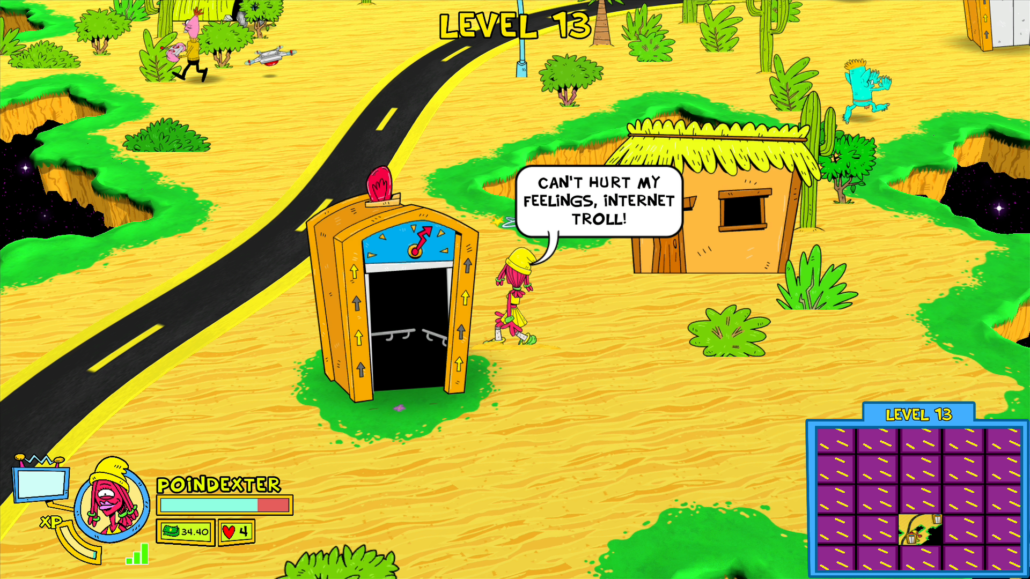 If you’re quick, play sessions on fixed can go up for an hour or two but after you reached the tenth floor you unlock the best mode Randomized mode and if you still aren’t satisfied after spending some time in the grind you can get the randomized hard mode. This will ramp up the difficulty and introduce you to bigger, better enemies if you’re up to the challenge. The game is best enjoyed with friends, in fact, I would say the experience of the game is completely different with some company, allowing up to four players to trek through each floor together and find all the treasures and presents on each floor. I’d say overall the game plays well and is smooth for what it is. It has many similarities to the original and includes a lot of cool characters even the option to play as the original ToeJam and Earl and their respective moms.

ToeJam and Earl: Back in the Groove’s graphics are simple and beautifully animated while trying to retain that 90’s influence. The main menu and flashy background remind me of both Rocco’s Modern Life and old MTV Rap videos that I used to watch while growing up. Felt like a trip down memory lane.  I would say the art style for both the animated intro and the game itself are well done and suit the characters and NPCs alike. They all look like they stepped out of some old cartoon you used to watch as a kid which allows the game to allow the funny dialogue and insane antics you’ll encounter across your travels in the game. 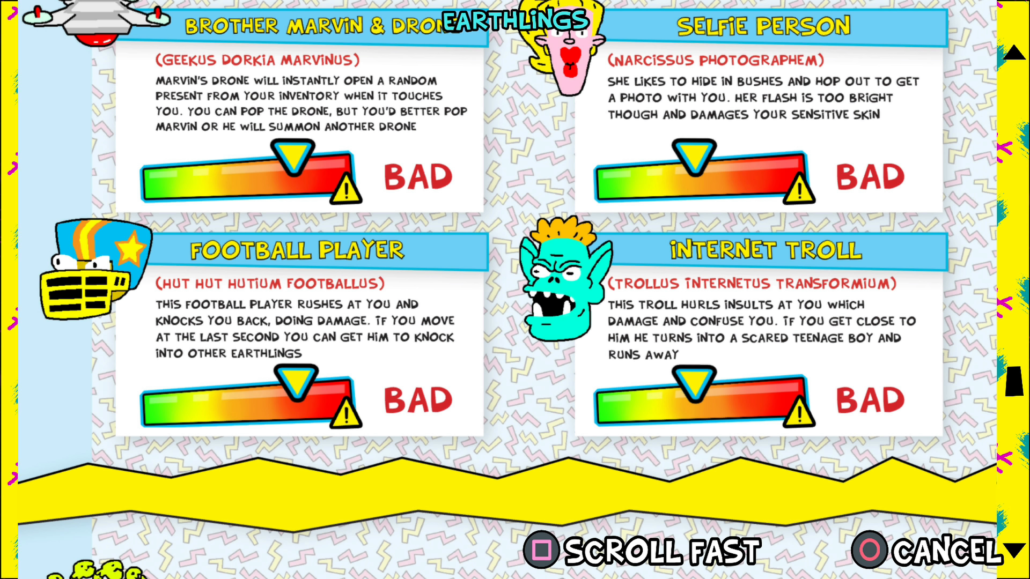 Back in the Groove’s funky soundtrack is phenomenal playing itself off to sound like old instrumentals from funky rap songs and being able to produce such a relaxed and spacey feeling. It sounds alien in a few ways and that just fits the characters because well you’re an alien. The variety of music including the ones from the special levels is just goofy and fun. The sound effects also fit that niche of just being like a cartoon you have so many weird and zany sounds that happen as you progress like the elevator sounds you hear when you’re going to go up to the next level or the screaming your character makes as you get knocked off the platform. I would say overall the sounds are solid and really help the game hold up.

I’d personally say ToeJam and Earl: Back in the Groove has been one of the most entertaining games I’ve got the opportunity to play through this year. It felt like a trip down memory lane as it perfectly recreated the feeling of the first and then some. I could see myself spending hours and days with friends in the future playing through this masterpiece. The controls were simple enough for everyone I invited over to play. The fact that this is also portable on Nintendo Switch consoles is overwhelming because it means you can pick it up and go play ToeJam and Earl anywhere! On the bus, on the train, on the RapMaster3000 and more! Great job, HumaNature studios.

ToeJam and Earl: Back in the Groove goes old-school and ignores those experimental sequels to create a spiritual successor that's even more charming than the original Genesis adventure.