Borderlands sells itself of crass humour and billions of similar but technically different weaponry. The model, originally established over a decade ago, has served Gearbox well through several games and spinoffs since. Tiny Tina, the miniature explosive expert, became an instant fan favorite when she was introduced in the second Borderlands installment. Her D&D-inspired DLC Assault on Dragon Keep was hailed as a standout amongst the various Borderlands 2 DLCs. Several years later, this Bunkers and Badasses in-joke has been expanded even further into its own fully-fledged spinoff with new characters, classes, abilities, and weapons. But while it offers some refreshing changes, there are also a few signs of a formula tiring at the edges.

Tiny Tina’s Wonderlands is a fantastic game for anyone looking for an irreverent shooter to romp through with friends. The combat is great and well-balanced, but more importantly, it offers a level of chaos that is spectacular to wade through. Explosions and elemental damage flood the edges of the battle as nibble enemies cut through the centre and the band of heroes bounces around with a tiny illusion of tactical practice.

Tiny Tina’s Wonderlands has also shaken up the combat just a little bit. Grenades have been replaced by magic spells that look much more exciting and offer a similar range of area of effect and debuffs. Where the most significant change comes from is the melee combat, though. Veterans of Borderlands will know that that melee was used as a last-ditch attempt to hold back the ravenous forces of the enemy while you reload your shotgun. Wonderlands has a more tactical use of the swords and maces you’ll expect to see in a high fantasy setting.

Firstly, and most notably, the player character will not lunge forward to the enemy you want to swing at. This lets you close the distance and get in sometimes crucial first strikes. It’s one of those little changes that sound almost completely insignificant but feel incredibly meaningful when playing and can even change how you approach the fights against the mad beasts that Tiny Tina puts before you.

The cel-shaded graphics hold up incredibly well and work perfectly with the exaggerated fantasy landscape. The mainstay sci-fi weapons have been replaced with thousands of crossbows, bows, and staves that all look – and unsurprisingly feel – suspiciously like guns with glowing runes and a thoughtful makeover. Explosions of magic, vicious beasts, and the landscape all bleed into a vibrant, wild world that is exactly what you want to explore as a player.

And you have a whole world to explore. Borderlands has been cleverly expanding its maps in creative ways, with Borderlands 3 offering the most diverse and expansive world to explore.
Tiny Tina’s Wonderlands, with its fantasy setting, tabletop homage, and constant references takes the world exploration in a different direction. For the first time in the Borderlands IP, players will have an overworld to wander through, complete with side quests and secrets. This travel by map can make the locations feel a bit unconnected, but it also allows for a huge variety of places to delve into. And once you’ve reached your location you’ll have the full experience you’re used to.

Some areas lean into the smaller side, mainly constituting an arena or two to fight the hordes of enemies waiting for you. Others are huge dungeons with multiple routes, secrets to uncover, and treasures to loot. All of this gives you a great experience, especially with friends, which is exactly how these games were meant to played. The classes and skills that unlock in the typical fashion offer a range of complementary and ridiculously counter-intuitive abilities to wreak havoc on the battlefield. You can coordinate your assaults as a group to have the maximum impact or shake things up and use them whenever you want.

But it’s in the strangest way that the Wonderlands feels somewhat lacking: the writing. Tiny Tina was at one point a challenger to Handsome Jack for the funniest one-liners and unexpected set pieces. But Wonderlands doesn’t quite work in the same way. Perhaps it’s just me becoming older and more grumpy, but the whacky humour and references feel more forced and shallow than the other Borderlands games.

There are still dozens of funny moments, great lines, and likable characters. But unfortunately, these feel paced further apart than in the Borderlands titles. This only means that Tiny Tina’s Wonderlands is a bit more irritating when playing solo. In practice with some friends, you’ll barely even notice the throw-away lines failing to connect. 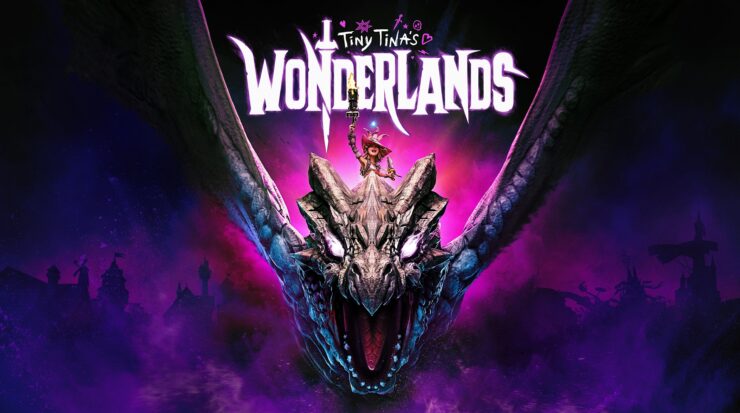 Tiny Tina's Wonderlands offers some new aspects of the series, with more of the classic, almost unbeatable gunplay and wild combat encounters. It is a vibrant, slightly disjointed world ripe for exploration and trouble. Although it misses a few marks, it’s a spinoff series fans will enjoy and high fantasy fans will inevitably laugh or roll their eyes at.

New Tales from the Borderlands Drops in October, Will Focus on a Fresh Trio of Characters