The Witcher universe has been charming people all over the world for quite some time now, even more following the release of The Witcher 3: Wild Hunt. While Geralt is the central character of both the novels and the games developed by CD Projekt Red, there's so much more to the Continent outside of the witcher and his closest friends. And this is where Thronebreaker: The Witcher Tales comes in. The new role-playing game manages not only to expand The Witcher universe with another great tale but also shows how it's possible to create a refreshing experience based on a digital card game.

Thronebreaker: The Witcher Tales follows Meve, queen of the northern kingdoms of Lyria and Rivia, a woman who is said to be a formidable warrior and a wise ruler. The tale starts right after a meeting between the kings of the North, Vizimir of Redania, Foltest of Temeria, Demavend of Aedirn and Henselt of Kawdwen, an event which is fully detailed in the Blood of Elves novel. Following the meeting, Meve and her retinue are forced to deal, on the way back to the capital, to deal with a crisis involving a group of bandits called the Strays of Spalla. Little does the queen know, however, that something much bigger is brewing, and the Nilfgaardian invasion of her kingdoms is only the tip of the iceberg.

Thronebreaker: The Witcher Tales tells its plot in a very engaging way. The most important events are represented with some beautiful art in the vein of The Witcher 3's recaps, while dialogues between major characters are shown with big, animated sprites of the involved characters. Other story events are simply narrated, with more art being shown to give players an idea of what is happening. While all this may be different from what fans of The Witcher series are used to, it works incredibly well, also thanks to the excellent narration.

Thronebreaker: The Witcher Tales' story is extremely gripping, and not only thanks to how it's told. It starts a bit slow, but things ramp up before long, making it difficult for players to put the game down. Characters are extremely likable and believable, especially main character Meve, and the writing is excellent from beginning to end. All dialogues are also voiced, which helps immersion considerably. Those who have read the novels will also find plenty of references to The Witcher books, with some unexpected returning characters.

What's most surprising about Thronebreaker: The Witcher Tales is how CDPR managed to create an incredibly engaging gameplay experience based on Gwent, the card game originally introduced in The Witcher 3 and later released as a stand-alone title. The game plays like a true role-playing game: during the course of the game, players will control Meve in a top-down view as she and her army traverses a lot of different regions, some of which never appeared before in any game of the series, like Aedirn, Lyria, and Mahakam, home of the dwarves. While moving about, Meve can gather resources, which are extremely important to sustain her army, interact with characters and move the story forward.

Interaction with other characters involves, most of the times, making different choices, in true The Witcher fashion. All Meve's choices have consequences: they may improve the army's morale, lead to the finding of treasure, lead to a loss of resource and even prevent some characters from joining the Queen. There aren't big story repercussions, so don't expect branching paths like in The Witcher 2, but what's in the game makes the choice feel real, and not just a gameplay gimmick.

Where Thronebreaker: The Witcher Tales truly differs from most RPGs released so far is when Meve's army has to engage the enemy. The game's battle system is based upon the Gwent Homecoming redesign, which brings a lot of important changes, such as the different number of lines, now two instead of three, and a lot of balance tweaks. At the beginning of the game, players will have a pre-built card deck which is more than enough to deal with most battles, but there's plenty of customization possibilities if the players want to engage in them.

Deck customization isn't the only feature that prevents Thronebreaker: The Witcher Tales to get stale soon, as multiple best of three rounds matches would get boring soon. During the course of the game, players very rarely will play a "regular" game of Gwent: most battles come with different objectives, like destroying a specific card, preventing one from moving across the board and so on. The different objectives force players to adapt to the situation, making everything quite varied and engaging. Even more engaging are the optional Puzzle battles, which task players with completing a certain objective using a custom deck created for the occasion. No matter the type of battle, however, players will rarely be stuck for long, as the game is quite easy, even on the hardest difficulty setting.

As mentioned above, Thronebreaker: The Witcher Tales is, effectively, a role-playing game. While it's not really possible to improve single cards with experience points and similar mechanics, there's still plenty of room for improvement in Meve's army. During the campaign, players can access the Camp at any time and use its many facilities to unlock additional cards, check out documents, play against the AI in a practice match and unlock additional perks for Meve and her army, such as increased movement speed on the map and higher recruitment limit, which is extremely important when building a deck, as all cards require a certain amount of resources to be kept in the deck, with better cards requiring more.

Like the story and gameplay components, the presentation of Thronebreaker: The Witcher Tales is also excellent. The art used during story sequences is beautiful and so are the locations, which are filled with detail at every turn. Menus are also extremely easy to navigate no matter the used control scheme, and the soundtrack in on par with The Witcher 3's one, with a few standout pieces that better highlight some of the most important story events. Voice acting is just as good as the soundtrack, with British accents giving the game a true medieval feel.

There's very little wrong with Thronebreaker: The Witcher Tales. With it, CD Projekt Red has shown how it's possible to create an amazing and varied experience based on what once was just a simple mini-game. 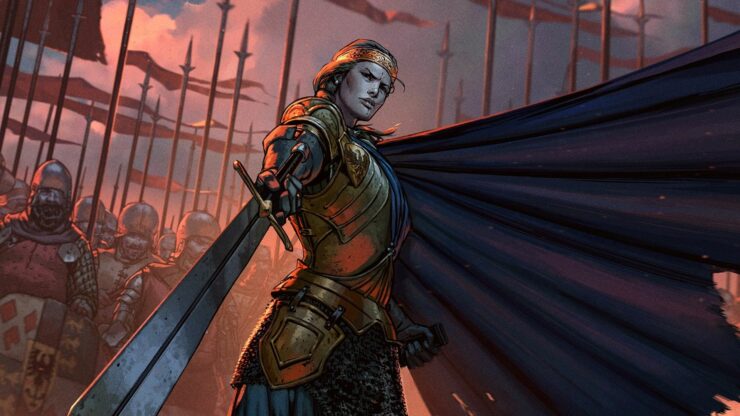