The computer case (or chassis) is the most difficult component of a PC setup to review. One man’s dream case is another man’s trash. What is aesthetically pleasing to one computer user can be an eyesore for another. When reviewing a computer case it is thus necessary to maintain a certain level of objectivity. Features should take precedence over looks.

It is with this backdrop in mind that we bring to you today the Thermaltake Element V case which has been specifically designed in collaboration with Nvidia to guarantee trouble free high performance gaming chassis. 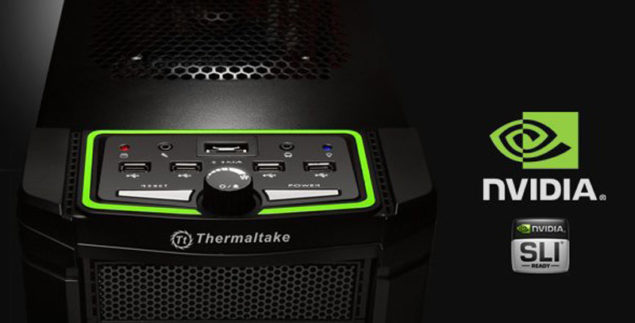 This is a full tower case and supports E-ATX form factor motherboards. As is usual for the majority of cases these days the construction is of steel with plastic. As this is a Nvidia badged case, you will find lots of green plasticky bits in the case. After all what Nvidia case would be without green!

The case comes in a large cardboard box which resembles closely with that of the traditional element V. The Presence of Nvidia branding is prominently displayed on the box which makes it stand out from the usual element V box.

In the box the case lies between two pieces of foam covered with a bag. Within the case lies the accessory box (screws, zip ties, speaker and rings to cover liquid cooling ports) as well as the user’s manual. 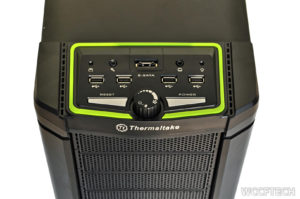 The top of the case has a large control panel area which for the Nvidia edition has a green outline. The most prominent feature here is the rather large fan controller knob. The fan controller doubles as a light changer for the fans. Pressing down on the controller allows the user to switch between the 5 LED colors for the fans (not all fans provided in the case have LEDS, see below for more information). On either side of the controller are the power and reset buttons. Looking from top it looks like the front of an old propeller driven airplane. The propeller being the controller and the power and reset button being the wings. The power button are your ‘tap’ types.

Behind the control panel area are two 200mm perforations for fans. One is provided with the case, the other is optional. The fan can be taken off to fix a radiator in this area.

Aesthetically (in my opinion) the control panel area is well designed. Functionally, the lack of USB 3.0 is disappointing. Almost all boards shipping today have an option for plugging a USB 3.0 port to the computer case (either via a dedicated internal header, or via an extension cable that attaches to a rear IO area USB 3.0 port on the motherboard). The fan controller is a nice touch as is the light switcher. As the power and reset buttons are not the usual ‘push’ type it is possible to accidently hit them and either shut or reset the computer.

The front of the case is all plastic with steel mesh and has a prominent Nvidia badge and logo. 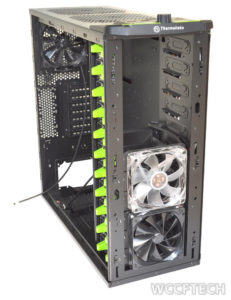 It is very easy to detach the front from the case (almost too easy) to access the air filters. The side of the front has green accents as well. The mesh covering the 5.25 bays snap off to expose the mounting area for optical drives.

The left side panel (over the motherboard area) sports a large central 230mm fan as well as a tiny window above it. It is held in place by a latch mechanism and thus is very, very easy to remove and replace. It can also be locked into place so that no un-authorized person can delve in the innards of the case.

The placement of the fan in the center leaves very little room for a proper ‘window’, thus case features what can be best described as a prison door window. You won’t get much of a view inside, just enough to know that there is something there. Thermaltake should look at other manufacturers from creative inspiration. Full tower cases like the Xigmatek Elysium feature a fan window combination, that while not ideal is much better than this.

It is possible to attach a bottle holder on either of the side panel, again a boon for LAN party gaming. What is odd though is that while Thermaltake has designed the side panel with LAN gaming in mind, the top misses this all together. Lifting a 14KG case without handles is going to be difficult. 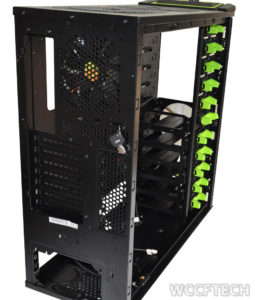 The rear of the case features the usual PSU cutout (at the bottom), a 120mm exhaust fan cutout (at the top). Liquid cooling ports are located just above the PSU area. The expansion slots are covered by perforated covers. The area above the expansion slots is also perforated. It is possible to install two 50mm fans here, though they are not bundled with the case. Continuing with the LAN gaming theme a keyboard and mouse cable security lock is also located at the back.

The LCS ports are oddly located. They should have been closer to the top to provide the best possible routing of tubes. 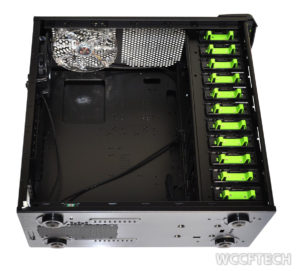 The bottom of the case features four rubber feet as well a perforated area for PSU fan.

The element V Nvidia impression is a hit and miss affair as far as the exterior is concerned. A well designed control panel which lacks USB 3.0. A top which has ample room for fans but no handle. Side panel with excellent latches but a crappy small window and a oddly placed fan. Rear with adequate ventilation but poorly placed LCS ports. 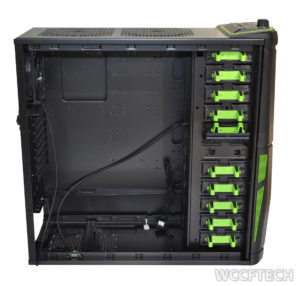 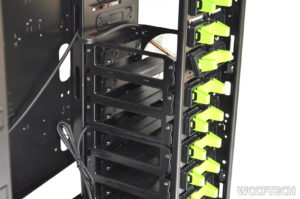 The front is all occupied by 5.25 bays. There are a total of 11 bays, 5 of which are for 5.25 devices, while the rest are for 3.5 drives. The case employs a 5.25 to 3.5 converter to accommodate the smaller drives in these bays. One such bay is included with the case which can accommodate 3 drives. 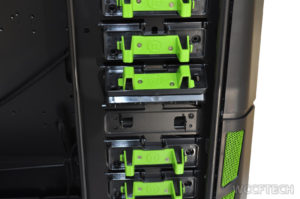 All drive bays feature a tool-less mechanism for installation courtesy of ‘green’ plastic locks. It is possible to hold all devices in place with a screw as well. Our case came with the drive cage that was screwed in place. This is recommended for transportation in order to make sure the cage does not accidently come out of the drive bay.

Inside, the PSU area features an ‘innovative’ (but very annoying) bridge which allows the user to install power supplies of varying size. It is annoying because it becomes necessary to take it out to install the PSU; it gets in the way more than providing ease of use.

It is also possible to install a 2.5” SSD in the bottom of case.

Just like the exterior the interior has good as well as frustrating design elements. To begin with the good bits: the 5.25 drives are a breeze to install. The large motherboard tray cutout should align well with most boards. The cable management openings while not ideal definitely aid in cable management. An opening just in front of the PSU as well just above the CPU area would have made things better. There is enough room behind the motherboard tray to route cables. Now the part that frustrates: The 5.25 to 3.5 converters require the user to take the cage out, install the drive and reinsert the cage. This is cumbersome and better installation scheme should have been relatively easy to employ. The PSU support bridge is more intrusive than supportive and a level surface would have been much better. The case does not come with power cable extensions. This is important for those who are cable management freaks as they would probably need to buy two (for CPU and main power) in order to neatly route the cables out of sight.

The case comes with five fans in various sizes and designs. There is one more fan for the GPU duct that we’ll talk about in a bit. The front (one of the two) , top and side fans feature color shifting LEDs. It is possible to switch between colors by pressing on the fan controllers. As there is only one colorshift switch all fans must change color together. 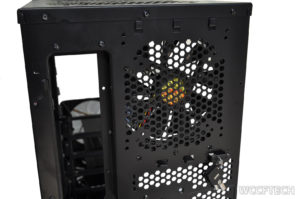 The rear exhaust and the second front fans are the non-LED variety.

An exclusive feature of the the Nvidia edition element V is the GPU cooling duct which is powered by a hefty 120mm, 38mm thick fan. It provides cool air from the front to the GPUs via a specially designed duct. As ours was a basic edition sample, we did not get this cooling system and thus can’t test its efficiency. The front intake as well as the bottom intake have filters.

We used the latest Intel platform -the X79 to populate our Element V. The CPU power cable had to routed over the board as it was not long enough to reach from behind the motherboard tray. The extra PSU cables can be tucked in front of the unit or on the backside. 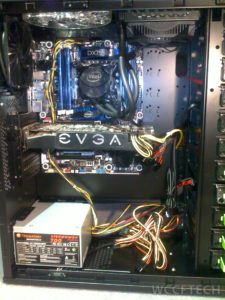 While this is definitely not the best case available in the market, it is far from the worst. Clever ideas like fan controller/ color shifter, latched side panel, GPU duct are coupled with annoyances like the drive cage, PSU bridge, lack of USB 3.0 ports, poorly laid out side panel window. Another aspect that comes to question is the plastic build quality. The front panel as well the control panel snap off almost too easily. The plastic latches will probably give in after a few assembly-dis assembly cycles.

For a case that has LAN gaming written all over its design, it is missing an all important carrying handle.

Should you buy this case? If you can put up with the nuances, yes. The airflow is terrific as are its cool features. Just don’t look at other cases in the market at this price point to avoid disappointment!!