The World Ends With You: Final Remix

The most difficult part of porting those classics from systems with unique interfaces is in converting the way those interfaces work into something completely different. What I'm trying to say here, is that the Nintendo DS and the Nintendo Switch are two very different consoles, and translating a game made to be played on two screens with a stylus, into a single widescreen experience played with either a motion pointer or your finger could not have been easy. And it shows when you play the game, sadly.

But do not fret, it is not the be-all and end-all. The World Ends With You is still a fantastic experience, one somewhat elevated in some ways by the virtues of the new system. The transition has been tough on TWEWY in a few ways, but what remains is still a game you should invest your time in.

The World Ends With You is an action RPG with characters designed by the famed Tetsuya Nomura - which immediately explains why protagonist Neku looks like he came straight out of Kingdom Hearts. Despite the cute pop-art style the game has though, the story is remarkably dark, feeling more similar in tone to the more grim moments in the Persona series. Trapped in a game made by "Reapers", Neku must work with his new partner Shiki to solve missions and save themselves from being erased.

The story of The World Ends With You is filled with endearing characters and a charming chibi recreation of Tokyo's Shibuya district. It's hard not to feel love for the story the game tells, even if Neku isn't the most likeable character to begin with, but you'll quickly get wrapped up in the swift pace of the chapters and plot.

The art style looks amazing on the Nintendo Switch's screen. It looks incredibly crisp, smooth, and far more detailed than it ever was on the Nintendo DS. Neku's animations as he runs even look incredibly smooth, something I couldn't help but fixate on from time to time. But there's a reason why I specified that it looks smooth on the handheld screen. When on a larger TV, things don't hold up so well. Background characters especially look low resolution, and the UI, while perfect for handheld mode, looks enlarged and feels off-putting.

It truly is a game of two halves, because aside from the minor change in visual quality between docked and handheld modes, there's also the disparity between controls schemes. As mentioned, it's built for a stylus, and even when using your finger on the touchscreen in handheld mode, it's not quite the same. Just not as accurate.

The combat involves Pins, which give you special abilities - projectiles, distanced attacks, melee swipes and much more. It's a novel combat system that allows you to customise the way you play, though since most of the moves use a tap, hold, or swipe, things can get confusing, especially since movement is also linked to swipes. What if you wish to move your character away, but an enemy on top of your character make the game think you're trying to swipe? Because this will happen often.

Essentially, using a single control method to both move and attack too often causes confusion, as your gameplay amounts to a mess of swipes and taps that the game sometimes struggles to comprehend or separate from the other kinds of swipes and taps available to you.

It's a problem somewhat solved when docked. Here you'll be using the JoyCon as a motion pointer, and then pressing A and swiping or clicking to attack, and pressing B to move. This small separation makes a huge difference in how combat plays out for me personally. But it's not perfect. You will regularly be pressing Y to re-centre the JoyCon pointer, as it's just not as accurate as something like the Wii pointer, sadly.

On top of that, motion control calibration feels very off most of the time. I myself, and several players online, complained about the pointer constantly dragging to the left. To solve this, I found that the wrist strap must be attached to the JoyCon, and it should be on a flat surface when connected to the console.

But this new control scheme opens up something completely new to The World Ends With You: co-op. Finally, you can sit with a friend on the sofa, and tap and swipe away with them and a second JoyCon. Once you've finally got the calibrations correct and everything's working fine, it's an absolute blast to battle with friends, making it much easier to sync up and get big damage in than it is with a CPU partner. 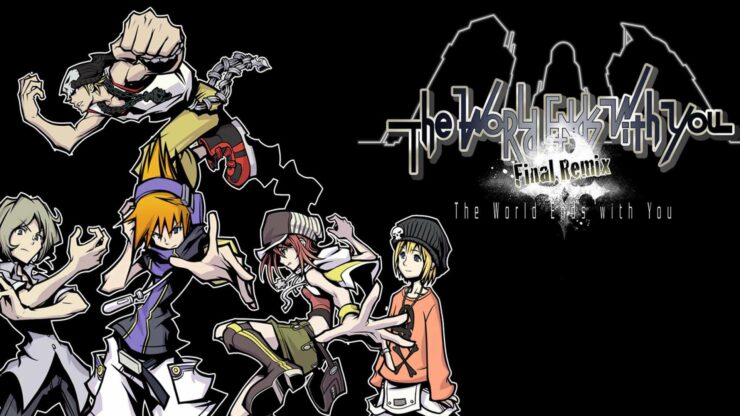 8
Wccftech Rating
The World Ends With You: Final Remix

The World Ends With You Final Remix is a port with problems, that much is certain, but I can't help but feel it's still a game well worth playing. I genuinely expected to be disappointed with how the game plays, and while there are some frustrations present that you shouldn't have to deal with, it's still such an enjoyable venture that I have to recommend it to JRPG fans. Oh, and the music is amazing.