Over the years, role-playing games have explored a lot of different settings ranging from the typical high-fantasy, D&D-inspired settings to sci-fi settings, but very few games have explored Celtic myths and lore. It's surprising, given that Celtic culture is extremely rich and well-suited for a video game setting, like the much more popular ancient Norse culture.

Being among the few games featuring a Celtic setting, The Waylanders definitely stands out from the competition in that regard. The fact that some of the story and gameplay mechanics are built around it could have elevated the game further if it wasn't for the shoddy execution and a severe lack of polish.

In The Waylanders, players control a fully customizable Celtic warrior as they accompany the King of Ireland King Ith on a journey to meet their gods, the Tuatha de Danaan. This joyous occasion, however, quickly turns sour, as the gods are not as benevolent as the Celts expected and the battle against them not only leaves our main character on the brink of death but also untethers them from time, turning them into the fabled Mil Espine and giving them the power to save their land in the era they have been born in and even in the future.

The premise of The Waylanders is fascinating, and it is definitely among the highlights of the entire experience. Having become the Mil Espine, a hero detached from time, the main character loses the ability to reincarnate but gains time-traveling abilities that let them reach the Medieval era, where Christianity has become widespread and the old traditions, including the usage of magic, have become legends. What makes this time-traveling affair interesting is that the Mil Espine will get to meet the reincarnation of his companions in the Celtic era, except a couple of these who are immortal and have actually lived through the thousands of years that separate the two eras.

While the reincarnated companions have the same souls they did in the Celtic era, they feel quite different from who they were back, and the Mil Espine will have to get to know them as if they were new people, although some of their aspects remain consistent. Interacting with the immortal companions is even more interesting, as players feel the weight of the centuries they have lived and the responsibility on their shoulders that has only grown larger since the fateful meeting with the Tuatha de Danaan and the appearance of the Corruption. This story mechanic works rather well and makes The Waylanders quite interesting, as it comes with a choice and consequence system that influences the two eras and the ending of the story. And while it may not exactly push the boundaries of storytelling in role-playing games, it can be enjoyable if one can look past some evident issues.

Unfortunately, The Waylanders suffers from very uneven writing, which negatively impacts both the story and companions. While refreshing, the humorous tone feels a little out of place during some of the story's most dramatic events, undermining their emotional impact, and the use of modern swearing ruins immersion. The story is also damaged by pacing issues and by how disjointed it feels at times, as story quests aren't unlocked naturally but must be accepted from the Vengeance ship. Many of these quests also have abrupt endings that send the player straight back on the ship upon completion, almost as if an ending dialogue or cutscene was missing entirely.

As already mentioned, companions also aren't a highlight here. While most of them are quite personable and charming, receive good development, and have good reasons to join the Mil Espine and be part of the story, some join rather abruptly and without any particularly good reason. Even in this case, it feels like story events are missing.

This lack of polish in how the story of The Waylanders is presented becomes even more evident in the gameplay. Simply put, there are times when the game is not fun to play, making the story, even with its flaws, the only reason to continue playing The Waylanders.

The Waylanders' gameplay formula isn't all that different from that of classic role-playing games like Baldur's Gate and Dragon Age. Both have been cited as major influences by the developer, after all. Throughout the game, players will explore a variety of decently sized locations ranging from bustling cities to forests, caverns, dungeons, and the like. Unfortunately, these locations are not interconnected, so the world tends to feel a little small, despite the great sense of scale of the location themselves. Design is also pretty decent, with most dungeons featuring a variety of simple puzzles that spice things up a bit, multiple paths, and tons of treasure. Nothing revolutionary, to be sure, but they get the job done.

While traversal in The Waylanders is mostly a straightforward affair, controls and camera issues make the experience more frustrating than it should be. The camera in particular can get extremely annoying, no matter which of the three types is selected. As an example, there are times when the camera zooms on the controlled character's feet when reaching certain obstacles or nearby area exits, forcing players to move to reset it back to a usable state. Additionally, the camera can only be rotated with the directional keys or by holding the right mouse button, a very counterintuitive way that makes something so simple feel very awkward.

These issues possibly become even worse when using a controller, as The Waylanders features one of the worst controller support I have seen in role-playing games. The menus, which are rather clunky even with regular mouse controls, become worse with a gamepad due to an unintuitive controller scheme. The fact that you have to press the main menu button again to close the menu instead of simply pressing the cancel button, for example, is only the tip of the iceberg. One could say that this type of game shouldn't be played with a controller in the first place. Still, if other developers like Larian Studios managed to make a game as complex as Divinity: Original Sin 2 fully playable with one, that point is clearly moot.

Playing The Waylanders with a controller feels a little better in combat, but it's still not the optimal way to experience combat, given the nature of the system itself. The game employs a traditional real-time with pause combat system where players can pause at any time to pick which ability to use. Each class comes with various skills that can generate Fury or require MP, such as magic, so knowing each class's ins and outs becomes very important to be successful in combat.

One intriguing addition to this classic combat system is Formations. After reaching Level 3, each human class can pick between different Formations, which are essentially new units made up of multiple characters. Among the Formations are some classics like the defensive Orb formation, the offensive Phalanx formation, and some very unique ones like the Golem and Conclave. All Formations come with unique abilities that can easily turn the tide of battle, and they are a creative way to spice up a combat system that is not particularly innovative.

The Waylanders features six basic classes, which can further evolve into 30 Advanced classes. While the human companions' classes can be picked between two different options when they join the Mil Espine, the main character class options are determined by the race and origin story picked during character creation at the start of the game. Upon level up, players receive Attribute, Ability, and Formation points that can be used to improve stats, unlock Active and Passive abilities and further develop Formations.

While the customization options featured in The Waylanders are many, the game doesn't do a good job of explaining how each class benefits from certain attributes. The tutorials are limited to the combat system, so role-playing game newcomers may have a hard time creating some effective builds, although it is possible to respec at least the main character for free. Thankfully, the game features multiple difficulty settings, including a Cinematic setting where characters cannot be defeated in combat to let less experienced players experience the story without having to deal with combat and the other RPG mechanics. Not that it may be needed, as the game is not particularly challenging, outside of a few situations.

The general lack of polish that permeates The Waylanders also touches the game's visuals, although not as much as it does other aspects of the game. As already mentioned, the game's world isn't vast, but the amazing sense of scale makes it so that every location looks and feels epic, even the ship Vengeance upon which the Mil Espine and his companions explore the world. The vibrant colors used for the locations and the character design also have a very distinct Dreamworks Pictures feel that makes everything feel quite personable. Facial animations are also very well done, giving even more personality to the cast.

While visuals are alright, for the most part, performance definitely isn't. The machine used for the test, powered by an i7-10700 CPU, RTX 3070 GPU, and 16 GB RAM, didn't manage to keep a steady framerate at 4K resolution, high settings, with stuttering and slowdowns even in situations where there wasn't a whole lot happening on screen. Lowering the settings and the resolution to 1440p or even 1080p didn't help.

I tried so hard to like The Waylanders in my 35 hours with it, but I really couldn't look past its many issues. While the setting and the time-traveling story mechanics can be appealing enough to get some players to the end of the story, the shoddy execution of many of the mechanics and the general lack of polish often make the game not that fun at all. Gato Studio's title needed more time in the oven to reach its full potential. 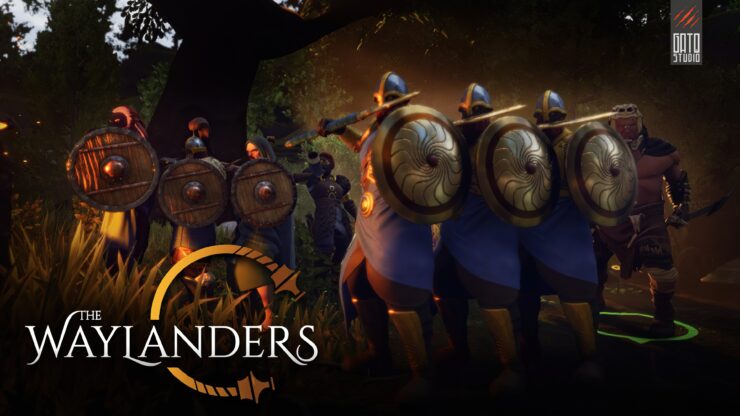 With its unique setting and interesting story mechanics powered by time-traveling, great sense of scale, and nice visuals, The Waylanders had the potential to be a remarkable role-playing game. The uneven pacing of the story, writing with wild quality shifts, the rather run-of-the-mill combat, the clunky interface, and a general lack of polish, however, make the game often frustrating to play, preventing it from reaching the heights it could have achieved.