I like smart level design. For all of the hype open world games have had over the last few years, they still fail to compare to a sharp, concise and succinct world to play in. The Sexy Brutale understands this, and so everything you interact with in the titular mansion is important for some reason, everything you do has an effect on some AI behavior somewhere. It might not be obvious at first, but all the gears click into place. The Sexy Brutale is an excellent example of smart game design – though, it’s not without its faults.

You take the role of Lafcadio Boone, a preacher who holds the fates of The Sexy Brutale’s guests in his hands. He awakes with a mask on his face, taking part in some masquerade party – one where every guest is killed by the day’s end. Granted a special pocket watch, and the ability to wield the powers of those he saves, he must go through the mansion, repeating the same day indefinitely, until he’s able to solve all its secrets and save all the guests. 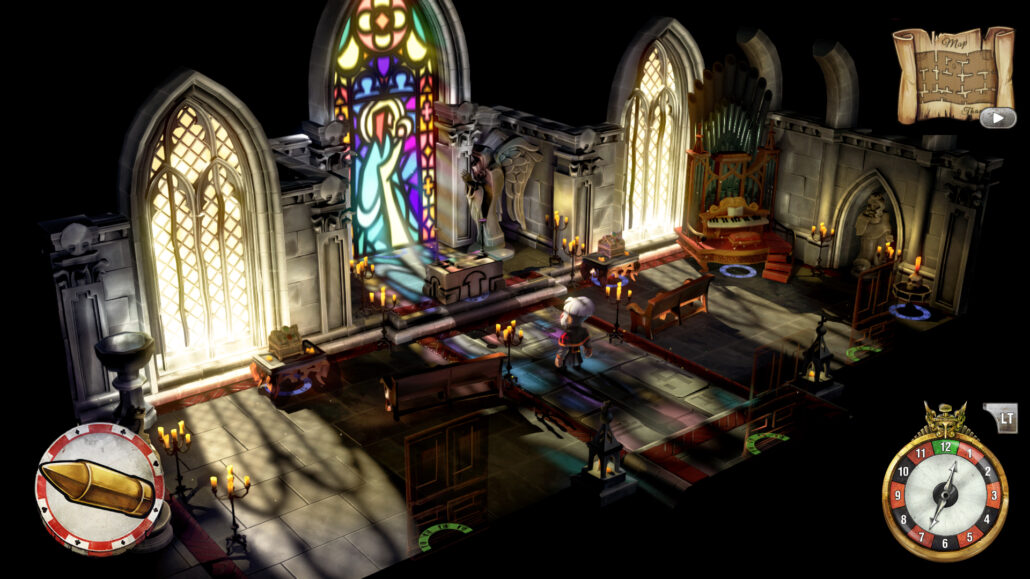 The Sexy Brutale is aloof and mysterious, and very intentional about it. You’re never really given much information on how anything works, it is up to you to discover the mechanics of the world for yourself.

While everyone is wearing their masquerade masks, you cannot be seen by them, nor the devious staff members of The Sexy Brutale. This means the game has a stealth element, one which doesn’t have you hiding under desks as often as it has you peering through keyholes, listening to conversations – you have to gather every bit of information possible in order to understand the characters, their importance to the mansion and its owner, and how you can save them all.

The first mission of the game teaches you everything you need to know; confined to a small section of the mansion you can watch the murderer and victim play out their day – following them room to room to see what they do and what they intend to do, while following clues. More often than not, the solution to saving someone’s life is as simple as following them around all day, taking note of what they interact with, before devising a solution. 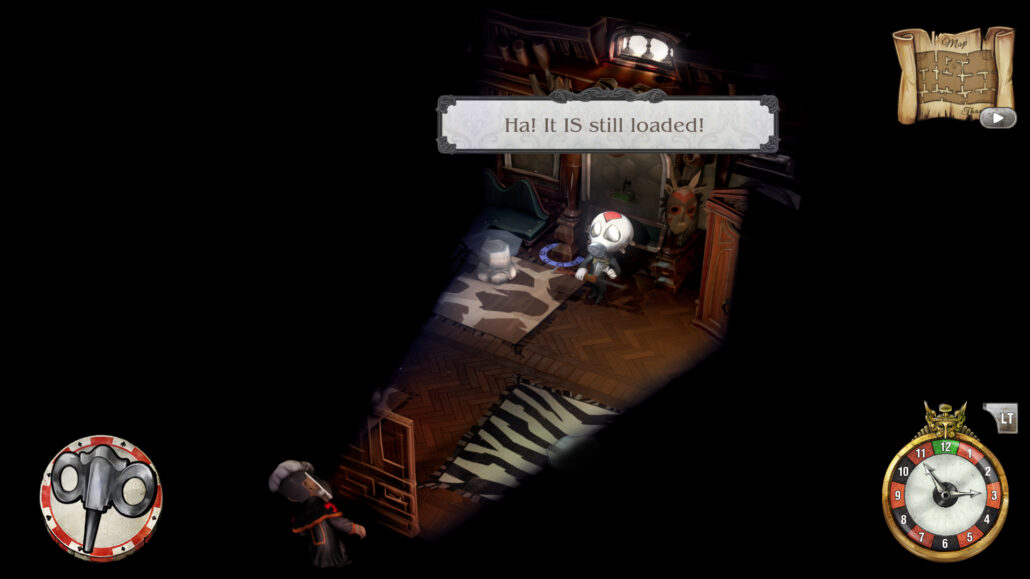 In other cases, though, The Sexy Brutale takes a lesson from one of the more obnoxious tropes of Adventure games: obtuse puzzle answers. Though these aren’t regular, a handful of times I found myself interacting with every object in the game world, with every object in my inventory, just to try to find a way forward – and the answers I found didn’t make much sense to me either.

In another circumstance though, I simply fumbled my way through, unsure of what I was actually putting into play, but successfully saving the guests. In either case, it wasn’t the most satisfying conclusion.

The minor gripes continue with some technical complaints. There seem to be a few animation issues yet to be ironed out, in one instance Lafcadio was unable to open a door as the animation didn’t trigger, and then he was unable to open any doors, forcing me to restart the day. Animations seem to be a problem in general, particularly when interacting with doors, and I saw a few NPC animations which didn’t trigger during certain scenes. Likewise, transitioning from room to room feels rough and can take you out of the experience. The way music levels fluctuate from room-to-room don’t help either – however, all of my technical complaints didn’t really affect the enjoyment I had in the game. 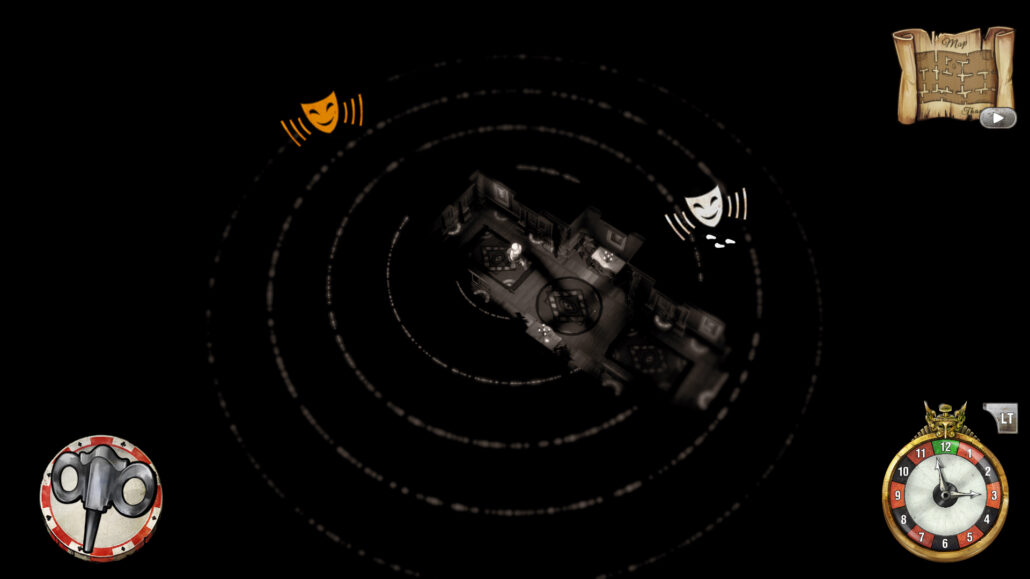 One thing I really like about The Sexy Brutale is the Groundhog Day-esque repeated day mechanic. There’s an element of Majora’s Mask to it all, where learning about the daily path the guests take and what characters they interact with all give you small hints as to what you must do in your quest to save them.

Saving guests bestows upon you their mask too, and their talents. This can range from being able to shatter mosaic glass, or unlocking padlocks which hindered your progress before. One mask which grants you better hearing allows you to hear whispers you could only guess at before and even overhear which buttons are being pressed on a keypad. All of these mechanics tie together to make for a fulfilling adventure, one that’ll have you happy to be filling out your map. 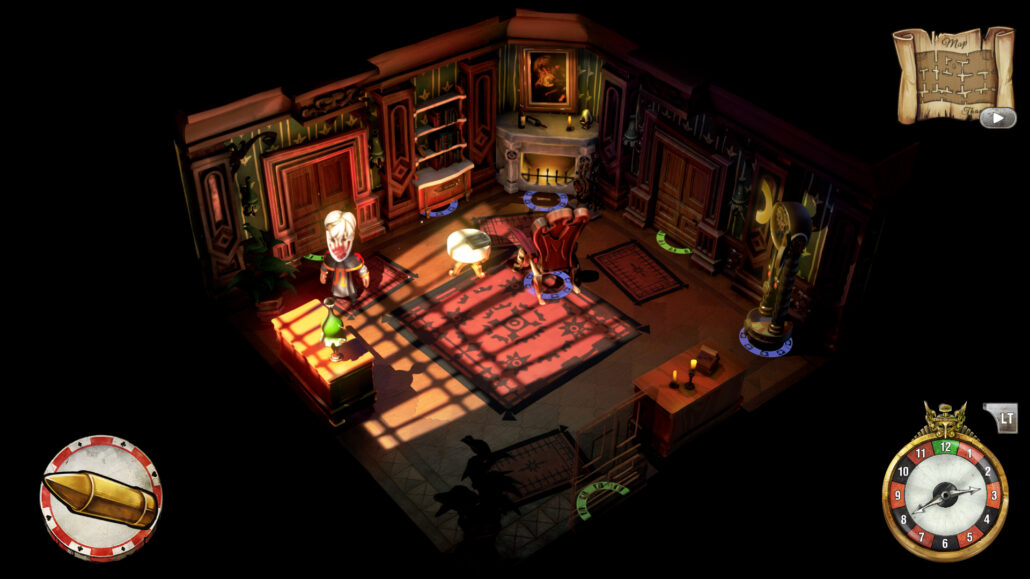 It helps that the mansion looks great, too. Everything is detailed, from the painting on the walls to the furniture, and the overhead perspective compliments it nicely – however, there is an element of shimmering to some objects – a first-world problem for those with big TVs.

While I may have some minor gripes with The Sexy Brutale, I think it’s a wonderful puzzle game, one that’ll really reward your time. The mansion is smartly designed, harking to the intelligently planned Spencer Mansion of Resident Evil, and the way you learn about characters is inspired by one of the most unique aspects of The Legend of Zelda: Majora’s Mask. The Sexy Brutale has bombastic music, a great cast, and some very satisfying puzzles. While not outstanding, it’s well worth your time.

Reviewed on PlayStation 4 (code provided by the publisher). You can buy it for Xbox One (digital) via Amazon.

While there are a few minor technical problems, I haven't played a puzzle adventure game that's absorbed me like The Sexy Brutale has in a long time. A great story well worth telling.