With Silent Hill existing only in modern Pachinko machines or as trivia questions at a Geeks Who Drink event, Konami's signature horror series hasn't seen many derivative works in recent years compared to other horror staples. That's why I was rather curious when Bloober Team, a studio known for Layers of Fear, Observer, and other first-person titles, expressed interest in exploring a third-person horror game. Not only that, but they would try and one-up Team Silent by introducing a world where the physical and hell planes exist not only in the same universe but could be explored simultaneously. As a next-generation Xbox (and PC) exclusive, Bloober Team's first crack at that deep psychological horror is The Medium, a fitting name for one that can commune with the dead. 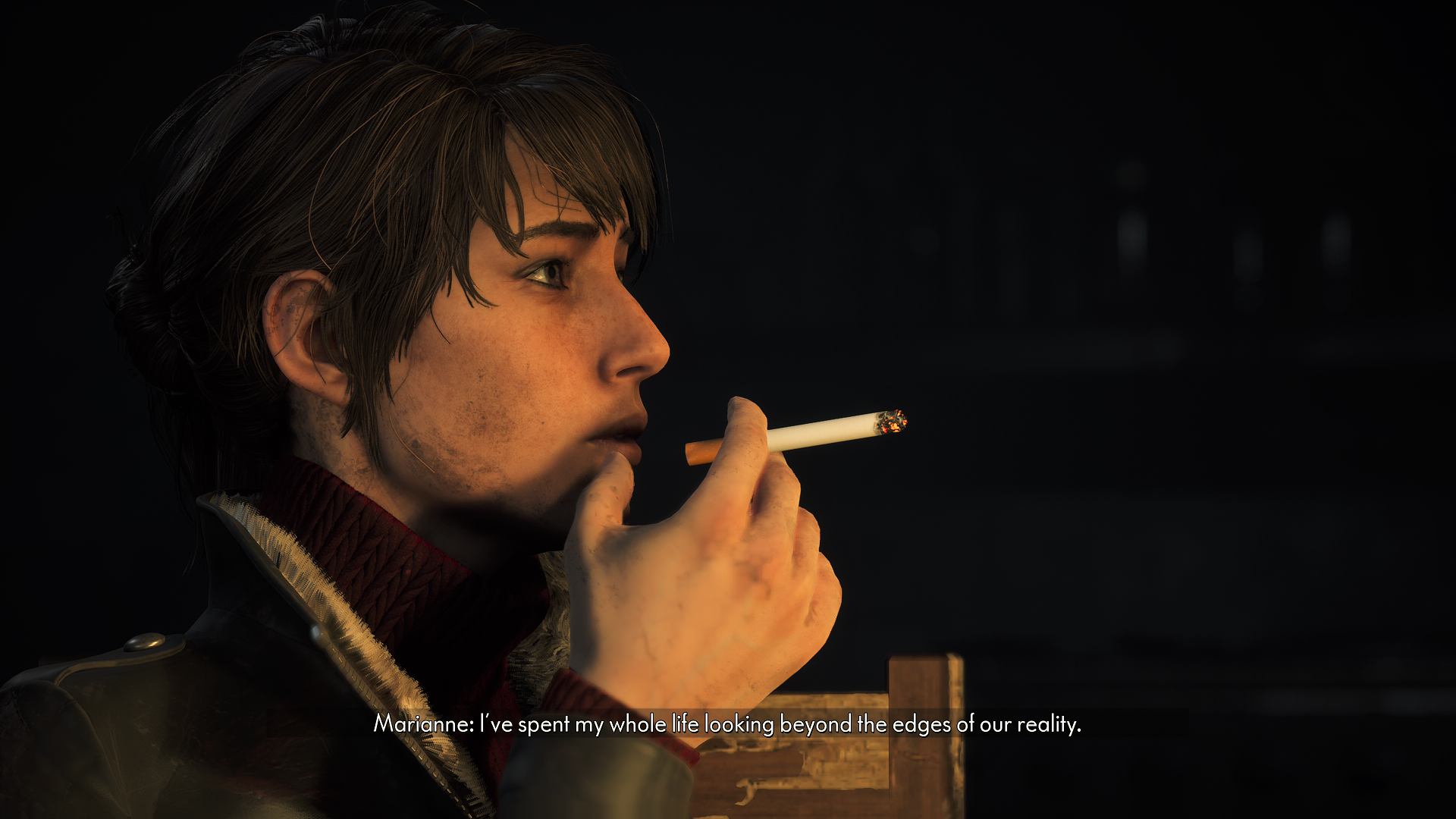 As The Medium of the game's namesake, Marianne has a unique ability to send away the souls of those left with a lingering attraction to the mortal realm, starting with the stand-in father figure that runs a funeral home, a rather fitting line of work for someone that can commune with the dead. By knowing their true name and severing that lingering attachment to this mortal coil, Marianne can set those wandering souls free. This role of hers pops up quite frequently during her visit to not-so-sunny Niwa as those beings of resentment often bar Marianne from progressing onwards until she can set them free. 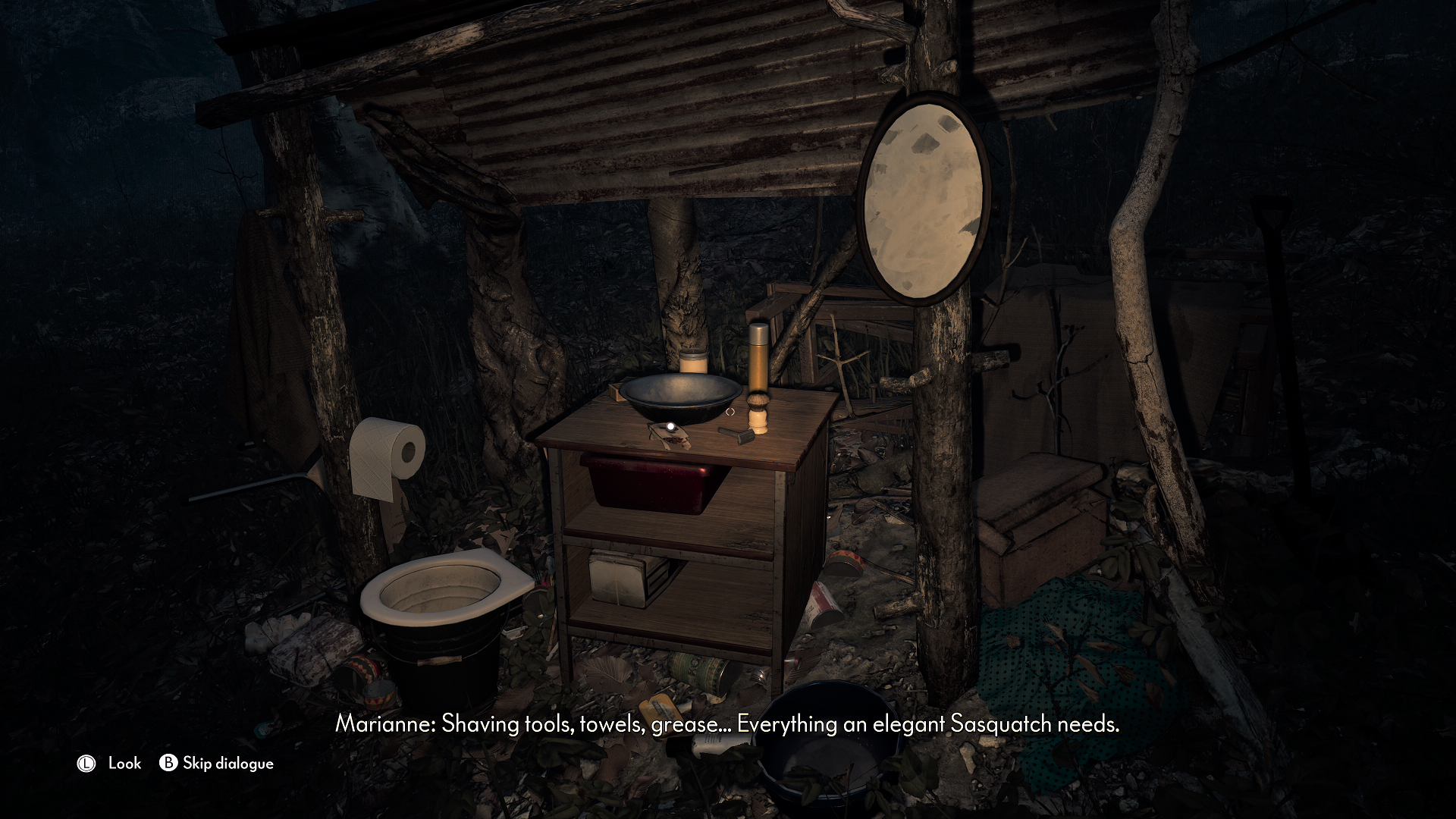 Unlike Bloober Team's majority of previous works, Marianne won't be venturing off into Niwa in first-person. Instead, The Medium relies on a more contemporary scheme to tell its tale, focusing on the third-person camera angles of early Resident Evil and Silent Hill games. Pre-determined camera angles help to focus the gameplay and draw the player's attention to objects of interest throughout the confined environments. The usual issues of wonky scene transitions are still as much a part of The Medium as they were in Silent Hill but I found that the camera angles were usually pretty generous when it came to showing more of the scene at a given time.

Marianne isn't much of a fighter and you won't find her using that otherworldly straight razor to fend off vengeful spirits. Instead, her powers as a medium are used for more defensive or strategic purposes in the spirit realm. Fueled by conveniently placed spirit wells that draw from the energy of objects that still hold an attachment to the mortal realm. Routinely, just stumbling upon an object of great importance isn't enough to draw its power; Marianne instead must traverse the physical realm to find other objects and combine them together, such as returning a missing children's toy to its rightful place, before her spirit side can utilize its power. Once charged, Marianne can either use that spirit energy for an outward spirit blast (again, non-attacking) to charge up unpowered generators or circuit breakers or, more commonly, place a spiritual shield around herself that allows her to walk unimpeded through assaulting barrages of spirit moths. 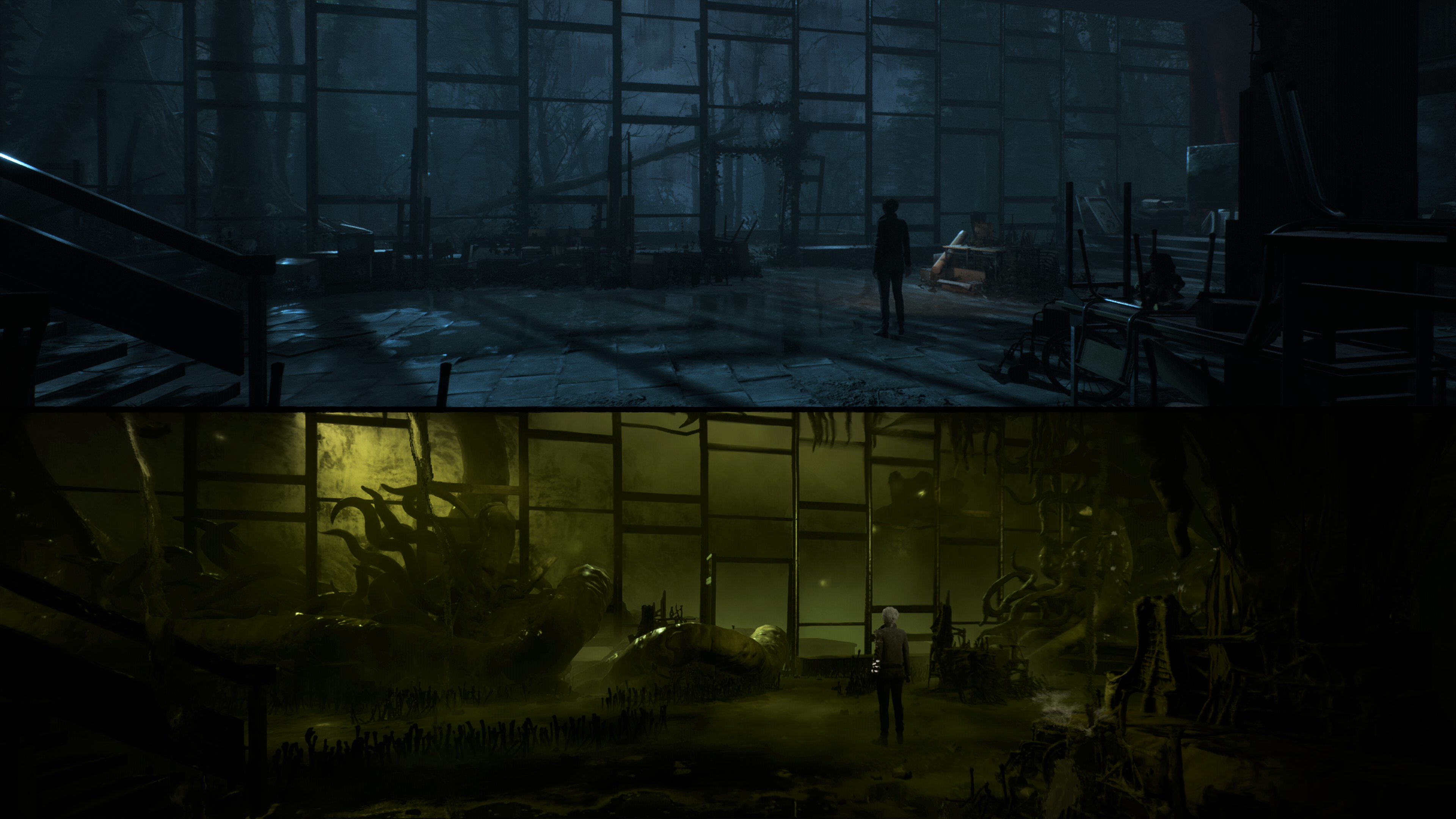 Much of the key items and inventory additions that Marianne sticks in her back pocket will be used throughout much of the six-hour playthrough. It's refreshing to finally have a survival horror game where the protagonist doesn't immediately throw out their set of bolt cutters after carving through one or two chained doorways. After going through the excessive puzzle that crops up in every survival horror game to unlock one of these tools, Marianne keeps those tools with her the whole way through. The first time you try to use these tools on a locked gate or fleshy wall, you have to go through a banal minigame of squeezing both triggers to mimic using the bolt cutters or draw a line downwards through meat seams with the analog stick. Unfortunately, this same minigame crops up not once, not twice, but every single time you run across a similar impediment. The mechanic wasn't fun the first time and it doesn't get any better five hours later. 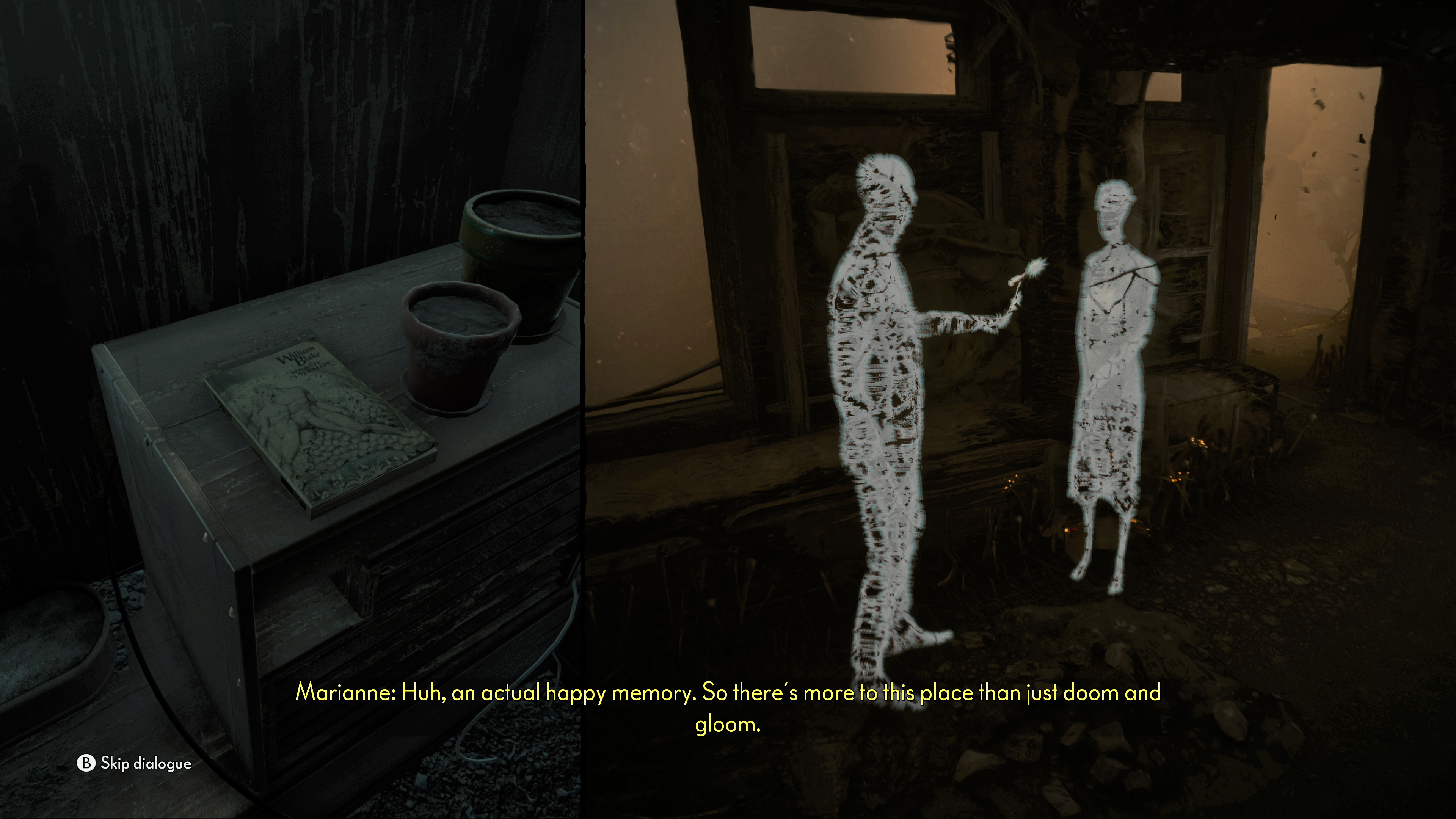 The Medium otherwise follows the typical tropes of what most survival horror games touch upon as a gallery of locked doors and one-way progression. Despite taking place in a grand, yet overrun, hotel in beautiful Niwa, Bloober Team has found a way to continue corralling the player into a nearly straight line throughout their adventure. Most areas will only be visited by a player once in either (or both) realms but it's otherwise a relatively straight path through the narrative from beginning to end. There are a small number of side diversions to collect postcards and other physical pieces of lore strewn throughout the less likely paths of Niwa but don't expect a great deal of backtracking and exploration along the way. Of course, there are a few exceptions to the rule, and Bloober Team sought fit to put the focus on a couple of important areas in the adventure that punctuate key turning points in the narrative. 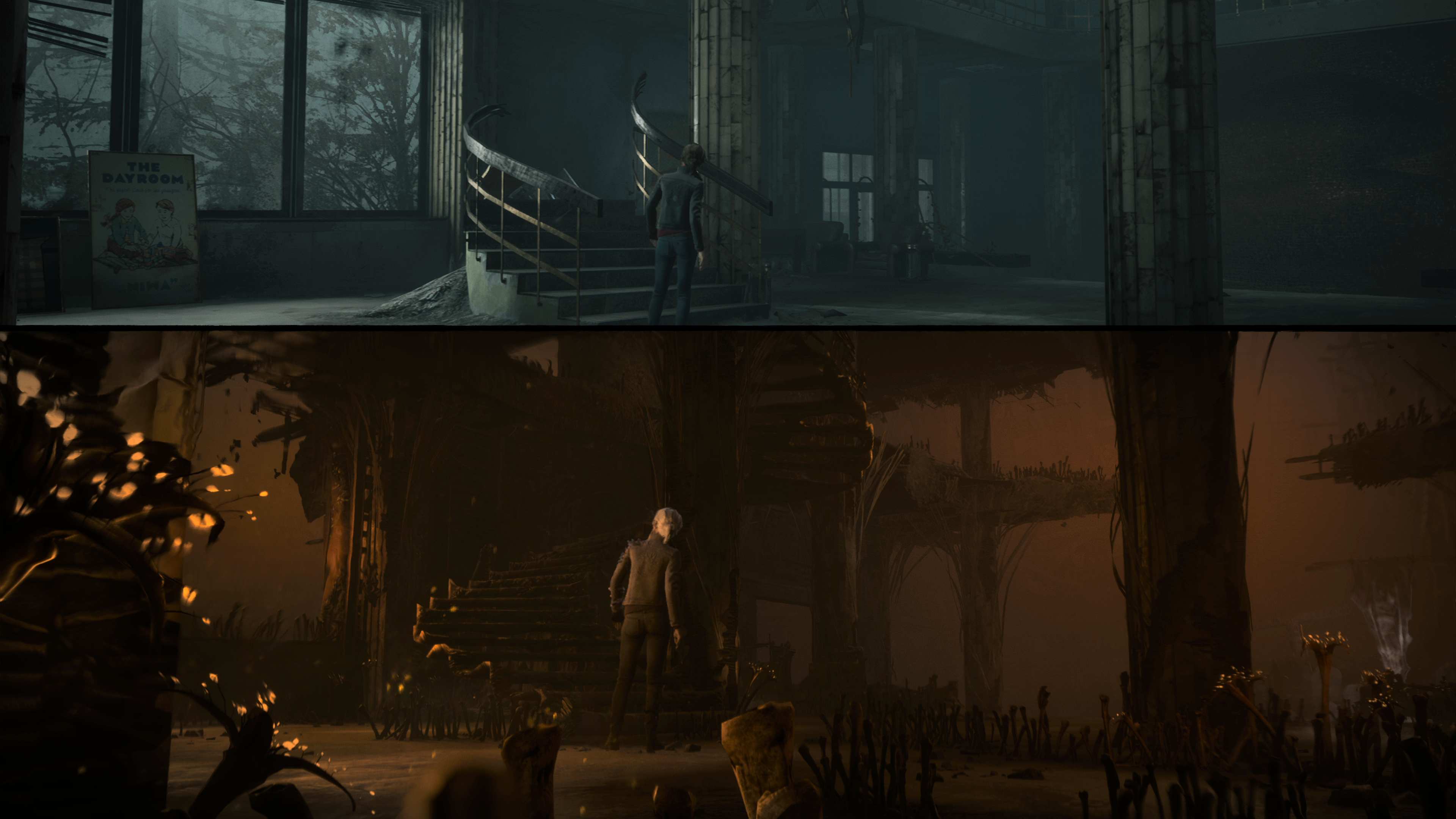 Part of what made Silent Hill such a memorable horror game was the use of dual realities that guide the player through both the real world and a world of delusions and strife, but these were always separate from one other (save for some beings that could traverse between them beyond the player). The Medium bridges the two realms together by granting Marianne the ability to not only jump back and forth between these two worlds but to co-exist in them simultaneously. However, this isn't an ability that the player has free reign to explore at any time they want. Much of the time is spent in the real, dilapidated world while delving into the Spirit World to unblock a path or power on a circuit breaker only happens at key instances throughout Marianne's story. It isn't until midway through the adventure that the player can come across a pair of cat figurines that allow Marianne to freely traverse between the two realms when she discovers an unbroken mirror. 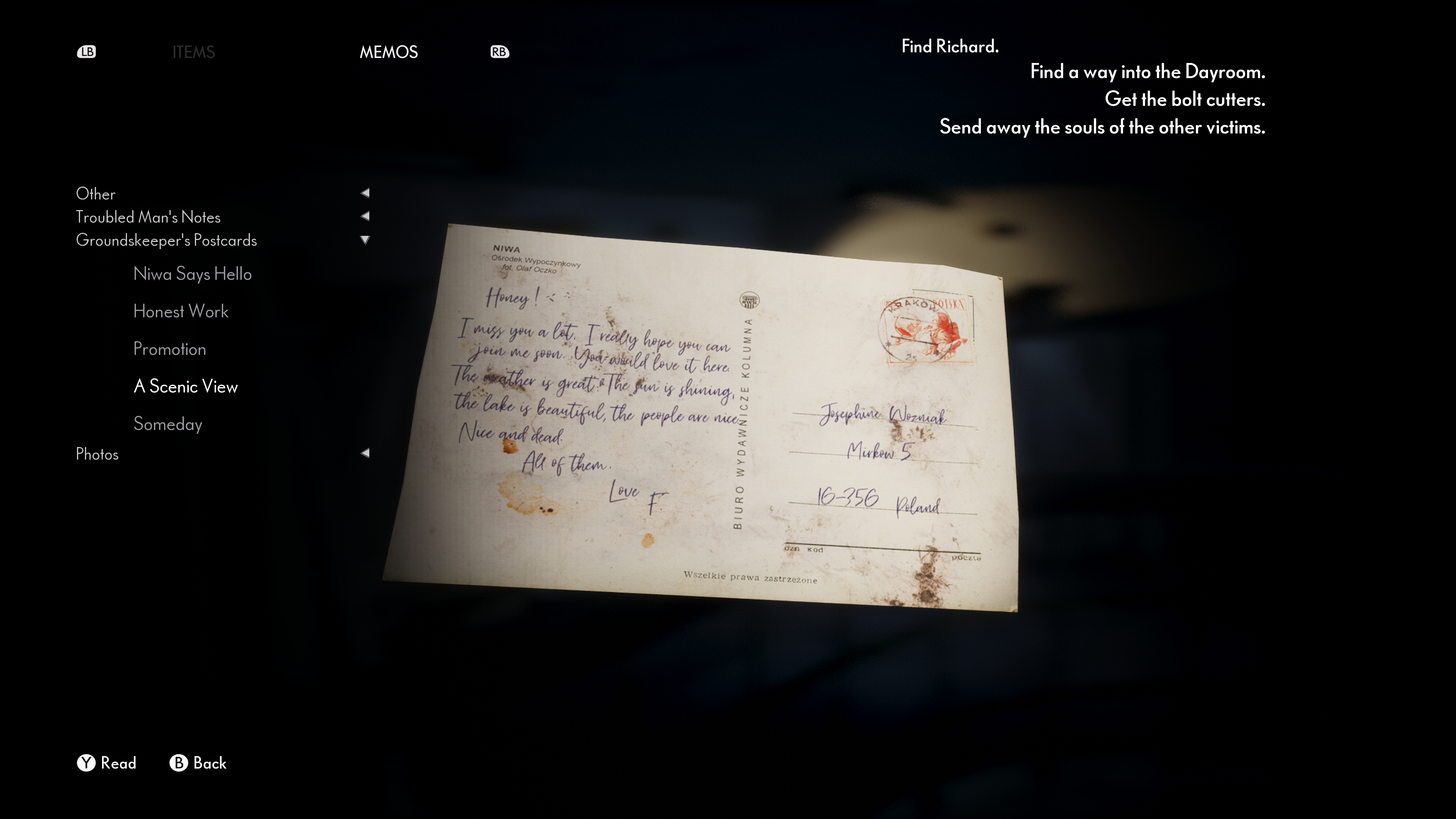 One of the big unique hooks to The Medium lies in Marianne's ability to exist in both realms at once, switching the perspective to a split-screen reality as the player controls both instances of her at once. As interesting as the meat-filled Spirit World can be, there's not much reason to explore and have a gander at the grotesque scenery. I spent much of the time wandering about, bumping into every object I could see in hopes of getting the nice big button prompt to interact and either unlock a path for the other reality or some hidden collectible. In a lot of ways, I'm reminded of Bloober Team's first Layers of Fear title. There's a lot of interesting window dressing to the world in either reality, but with how much you're constantly just running to the next checkpoint or safe harbor, there isn't much time to explore and take in the ambiance. If anything, The Medium winds up feeling like the first draft of something much more ambitious.

Reviewed on Xbox Series X (code provided by the publisher).

Marianne might be able to jump between two realities, but The Medium is trapped somewhere between being a worthy Silent Hill successor and another mediocre hide and seek horror game.