Have you ever walked through a door and forgot why you came into the next room? Sure, we all have at one time, but how about forgetting you were on a lifelong adventure to face off against a true evil that’s plaguing the land? NIS America’s newest portable RPG (if you take the Nintendo Switch off the dock once in a while) tries to answer that question with The Longest Five Minutes, an RPG focused around temporary amnesia in the most significant battle of your life and trying to remember *cue record scratch noise* just how you ended up in this situation.

Distilled down to its most basic components, The Longest Five Minutes takes what makes an RPG memorable and separates the story wheat from the mechanical chaff. The bulk of the story is still present, told through flashbacks and memories presented to the player in an order reminiscent of Memento but ditches the boring bits of traveling from town to town and doing the bidding of every townsperson you meet.

As protagonist Flash Back, you’ll be playing through an entire RPG in record time and living through his ‘Greatest Hits,’ if you were. Only the relevant parts of Flash’s life are playable, from his trials to become a Hero of the kingdom up until facing the Demon King in a climactic final showdown and only the most interesting bits in between, including an obligatory fan service scene at a hot springs resort. Accompanying the hero on his journey are three lifelong friends of various classes (Martial Artist, Wizard/Bard, and Cleric, if you go by the basic RPG tropes) as well as a few guest characters that join in the adventure on a number of occasions.

The Longest Five Minutes would’ve been a perfect fit during the NES’ later years when the teams at Squaresoft and Enix were coming up with unconventional methods of storytelling and roleplaying in their adventure titles. The graphics also match this aesthetic, staying true to their pixel-based forms and only achieving higher fidelity during some of the ending cutscene stills. Each memory that the player experiences is told with the most basic of dialogue boxes and sprite movement and, while the music isn’t anything too memorable, fits the scenes quite well with the retro aesthetic. 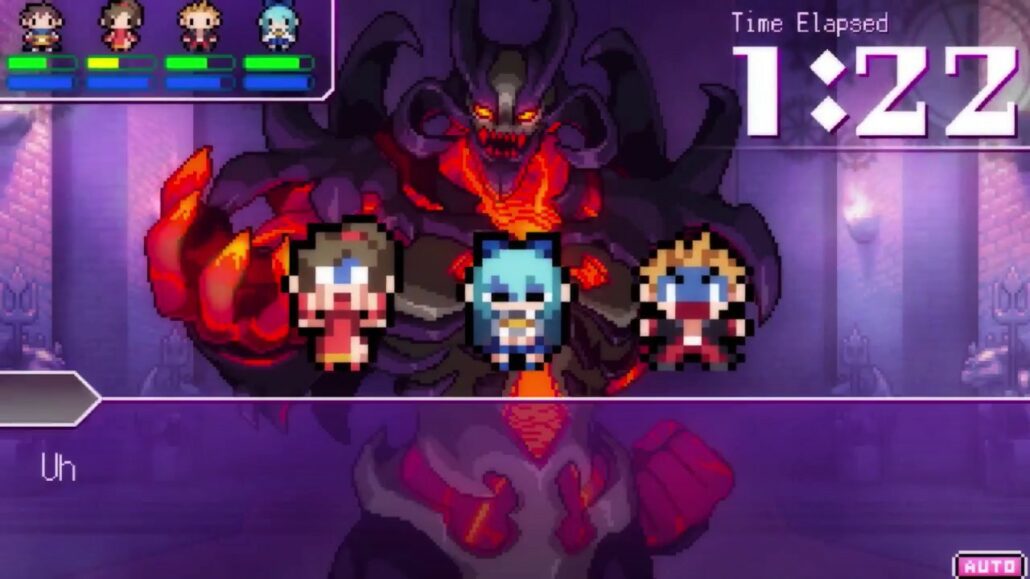 Combat plays out in Dragon Quest-esque battles, yielding turn-based strategy and simple sprite based attacks over flashy cinematic cutscenes and summon effects. In an era where most modern turn-based RPG’s have intricate mechanics or nuanced subsystems, it can be refreshing to go back to a simpler time when attacking and casting magicks were the majority of the player’s focus. Even in bite-sized chunks, The Longest Five Minutes features challenging boss fights that require some tactical finesse beyond just mashing attack and Heal every round.

Much of what would take up the majority of the time in a proper RPG feels like a waste in The Longest Five Minutes. Sure, you could grind to increase your power or gain a little extra coin to purchase a shiny new sword at the weaponsmith, but is there really a point? Human memory can be a very fallable thing and Flash’s is certainly no different. That fancy new hat or couple of extra XP levels make no difference, as anything earned in Flash Back’s memories are gone in the next minute. The only holdover between memories is a Reexperience level that holds some significance in the final battle, but I made no effort to continuously grind out battles to see what higher Reexperience levels would benefit in the long run.

Instead, I opted to use Flash’s Repel ability and dash through the latter half of the game and replaying previous memories to find the last few elusive trophies that I was missing. Suffering through zero encounters makes the dungeons a breeze, and while it trivialized some of Flash’s memories of lengthy dungeons, there was no risk of being underleveled for the next memory because of how each segment was separated from the next.

As Flash and the player delve deeper into those repressed memories, occasional plot choices force the player to make important decisions that could alter the story. Unfortunately, a great number of these don’t lead to any different outcome, save for a couple of bad endings. Much of the story leads into the same climactic final showdown and it isn’t until the last thirty seconds of the hero’s adventure that the player has the agency to make choices that truly matter. The Longest Five Minutes features a few different endings that are all dependant upon those crucial last seconds, so I definitely recommend hopping back into the old Memory Album to ‘reexperience’ a different ending for yourself.

Wrapping up The Longest Five Minutes thankfully takes a bit longer than its namesake, although not much longer. I had faced off against the Demon King and earned the first Platinum trophy in this title in a couple of afternoons, with time added for replaying previous memories and filling out the hero’s memory album. A more dedicated player could easily sit down with this retro RPG in the morning and feel accomplished just in time to craft some evening supper. For its premise, I think The Longest Five Minutes lasts just as long as it should and doesn’t overstay its welcome with unnecessary padding. It may not be the most satisfying RPG you’ll play all year, but The Longest Five Minutes certainly qualifies as an afternoon snack between major releases.

Reviewed on PS Vita (code provided by the publisher). You may purchase the game via Amazon.

An entire JRPG trimmed down to the length of a single afternoon, The Longest Five Minutes brings a Memento-esque experience that plays around with the plays with the concept of time and the fallibility of our own memories.