I’m a fan of Corsair kit. The gaming company has put out some great cases, keyboards, AIO watercoolers, memory and more over the years but perhaps the one thing which I’m enamoured with the company for over all else is its mice. I’ve had a lot of mice over the years and reviewed quite a few of them but I’ve never been able to find something that could do a good job of replacing my beloved Corsair Vengeance M65 FPS (non-rgb no less!). Well, today we're going to see if the Corsair Ironclaw RGB Wireless can fill some big boots.

This is where people will start shouting at me that “LG make the best mice!” or “Razer mice FTW!” or whichever their preferred brand is but I’ve just never been able to get on with any of them. The humble form factor of the Corsair M65 always took the win for me. It’s obviously been successful for Corsair as well given that the basic shape of the mouse has been around for the best part of a decade (the M60 came along first) and it has largely been unchanged in that time.

So what we have today then is almost the opposite end of the spectrum in the Corsair line-up with only the Dark Core and Scimitar models costing more than the Ironclaw. I also have to applaud Corsair that while competing brands have gradually upped the price of their gaming mice, Corsair keeps things honest with much more reasonable pricing throughout its range considering its premium brand status. Slightly ridiculous to me that I’m talking about a £70 gaming mouse as being reasonably priced but these days a lot of gamers don’t blink at a mouse that costs over £100.

Corsair Ironclaw – In the Box and Specs

So what we have here then is a nice palm grip mouse without the crazy number of buttons that some gaming mice have, but more than enough to keep it in the mix. A wireless mouse with both bluetooth and a 2.4 GHz wireless “Slipstream” dongle, the now ubiquitous DPI mode change buttons along with 8 others (all programmable). Then we get to the Ironclaw’s party piece.

Yep, you read that right. I’ll let that sink in for a moment. 18,000. I’m not sure if Corsair have claimed the DPI crown for the time being but a quick Google around the usual suspects’ web pages seems to indicate they have with most other vendors seemingly having settled around 12,000 DPI and only Razer coming close with 16,000.

Let’s take a look at the full specs then for the Ironclaw:

The Ironclaw in Action

I sadly disconnect my M65 FPS and plug the Ironclaw in to the micro USB connector to get it charged for first use. As expected, Windows 10 detects it no problem but I’m noticing some initial lag on movement after I’ve left it to rest for a few moments. It’s an odd experience and I’m slightly surprised and wondering if I’ve got a defective unit. Fiddling about with DPI settings doesn’t change anything but a full charge and some firmware updates later and I’m in business.

It turns out I needed to also update the iCUE software to get the full functionality like battery status in the taskbar as well so if you’re an existing Corsair iCUE user and haven’t updated in a while, it’s worth checking both the software itself as well as the mouse firmware to ensure everything is all up to date.

The side grip pads feel nice and gently contoured as you’d expect. Luckily for me as a fingertip/claw gripper, I’ve also got largish hands so although the Ironclaw is designed to be a palm grip mouse, I can tip/claw grip it with comfort and without it feeling too awkward.

A full charge later and it’s time to try out wireless. At this point I’ll confess that I’m not entirely sure I get the point of wireless mice like this. For someone standing at a lectern with a pointer giving a presentation that needs a clicker or something, wireless is fine but for desktop use? I’m just not sure it makes sense. Gamer friends try to convince me that cable drag is an issue for pro-gamers and that cables make mess whereas wireless doesn’t but I still need a USB cable on my desk to charge the thing.

It would make more sense to me if it was meant to be taken on the road with a laptop which is definitely something I’d be interested in but then I’d probably want some kind of protective pouch to come with it, maybe with the option for putting AA batteries in if in a pinch. None of that really applies here and I’m not a pro-gamer obviously so with a bemused flick, I switch the mouse into 2.4GHz wireless mode and plug in the slipstream dongle.

As a final note of trepidation, I recall the Razer Hyperflux Mamba wireless mouse I reviewed a while back and also that given my house is probably bombarded with wireless signals from I don’t know how many devices wife and kids have, in some rooms it had trouble maintaining its connection.

Unsurprisingly, less than a second later the mouse finds the wireless connection but perhaps more surprisingly, it doesn’t have any of the issues with maintaining that connection which I had with the Razer. A few setting changes later in the Corsair iCUE software and the mouse is set to sleep after 15 minutes of inactivity, poll at 1000 Hz (1 ms) and change the RGB to blue so that it and my K95 Platinum are both the same without having to wrestle with the (much improved but) still not massively intuitive iCUE software.

While I’m there, for a laugh I set the DPI to 18,000. Unsurprisingly, even on a 32” UHD monitor, the mouse is almost entirely unusable with a tiny twitch sending the arrow flying across the desktop. Thankfully I don’t need to spend 10 minutes trying to get the cursor onto the right location as the two buttons at the top left of the left mouse button are the DPI preset change buttons so I drop the setting back down to the middle option and change the top option to a much more sedentary 5,000.

Incidentally, for those who would rather be able to decouple the DPI on the X and Y axis, this is also possible via iCUE so if you’re gaming across a multiple monitor setup it may be appealing to set this up as shown. Additionally, although the Ironclaw doesn’t have a dedicated sniper button, you can setup a sniper DPI setting, you’ll just need to map one of the other buttons to enable sniper mode.

So what we have here in the Ironclaw is an excellent mouse from Corsair once again. In the hand the weight is perfect for me although it is worth noting that the Ironclaw doesn’t have the adjustable weights some other gaming mice have. Wireless performance is now akin to wired performance so for those who need a nanogram less drag on their mouse while duking it out in an esports championship final, you can rest assured that this mouse won’t compromise you since it has 1,000 Hz polling.

Additionally, I’m pleased that Corsair has chosen to stick with an excellent design and no gimmicks like interchangeable side panels etc. I have no problem with interchangeable button panels as such and for gamers who like to customise their setups individually for every single game to get what they feel is the best out of it, those mice will undoubtedly hold value. For me however, I’d rather find a mouse that I like which feels comfortable and which whenever I put my hand on it, feels like a pair of comfortable walking boots which I know inside out and am assured of how they’ll perform. I’d rather customise buttons with in game bindings or iCUE mappings of certain functions to buttons which I always know where they are and the weight of day in and day out.

There is an obvious “but” coming here though and it’s probably the one most people are expecting. As good as Corsair’s mice are, the iCUE software leaves much to be desired in terms of user friendliness. Corsair has worked hard over the years to improve its software platform and it shows, however it also shows that it still has a long way to go. This is unfortunately the case with many great hardware companies and I have no doubt that someone who chooses to fully embrace the Corsair ecosystem and regularly dives into the settings to update this macro or that DPI configuration option will quickly gain familiarity with it. It’s also worth mentioning that the number degree of customisation on offer means that it will never really be truly simple to give the user access to that much customisable functionality but for a casual like me, it (along with most other gamer software ecosystems) can be a bit daunting.

Overall however, if you’re looking for a great, palm grip wireless gaming mouse with a lot of customisable options, the Ironclaw is an excellent option both from a performance and a value perspective. As such, it heartily earns itself a recommended award. 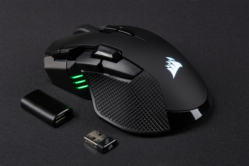 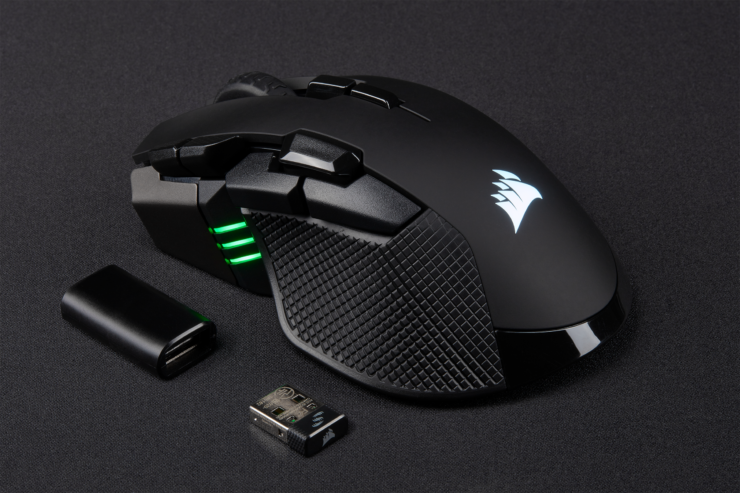 The Ironclaw is a great, honest and highly performant gaming mouse which feels great in the hand and takes the DPI wars battle to the competition.