Games are an art form. Luckily the industry is past the point where this is some sort of hotly contested hyperbole, but I too often forget that games can make me feel things other than excitement or elation – far away from the sounds of gunshots, sword swings and crush counters, I climb a mysterious, ancient stone tower, haunted by the distant sounds of beasts, comforted only by a beast which happens to be much closer to home.

The Last Guardian is a game unlike most – waypoints are gone, maps are out – there aren’t even any NPCs to start a dialogue with. In place of all of those things is an atmosphere which hasn’t been revisited since the last two titles developed by the same team – Ico and Shadow of the Colossus. Those two games were steeped in a sense of mystery, a feel of wonder as you explore parts of a world untouched for millennia, and that same sense of discovery is present in The Last Guardian, only with your new friend, Trico. 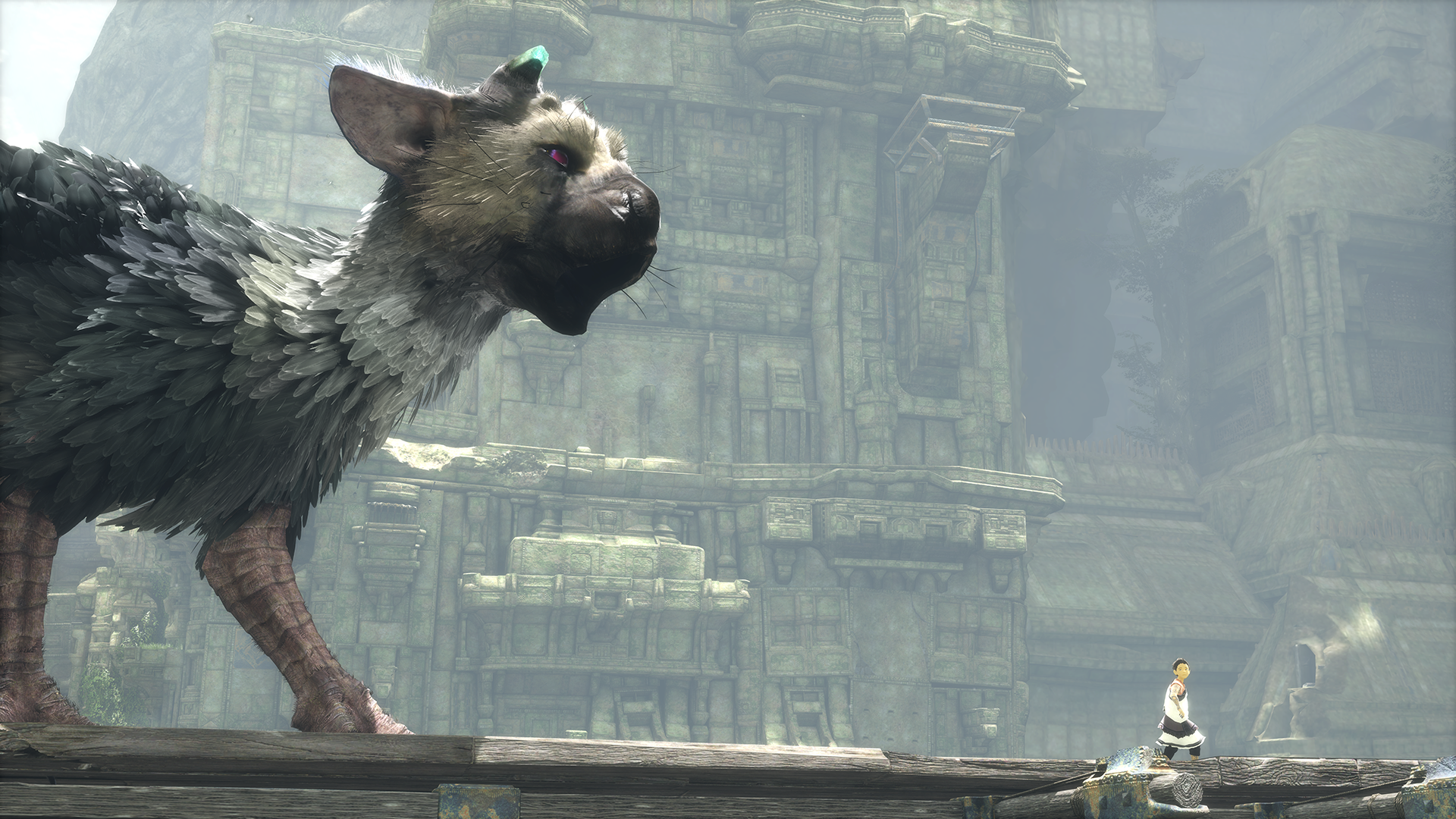 Trico, the half-dog-half-cat-half-bird precious pal, is a bit of a wildcard. At first, the beast will be uncooperative at best, and aggressive at worst. After earning his trust with some food and patience, Trico will become helpful – to an extent – and will carry you around the world, as long as you dictate where to go.

The above basically becomes the core gameplay loop – you’ll find a new area, and each time you’ll work towards finding a new path for Trico and yourself to navigate through. Sometimes it’s a simple case of having Trico lift you up to a platform with a switch or level hidden away, other times it’s asking Trico to leap from cliffside to cliffside, barely clinging onto the rocks tumbling down the rocky surface.

It becomes clear after a few hours with the game that the goal in mind when developing The Last Guardian was to create a believable world, with Trico, the very real creature. The way he moves and acts is taken straight from real life cats or dogs – this becomes particularly evident when Trico whines for your attention, or to stress that he can’t perform a jump. All of his animations, the sounds he makes, even his weepy eyes, adds to the illusion that this is a real beast you’re trying to tame – a wild animal that could eat you at any moment.

Trico also comes with his frustrations, though. A wild animal he remains, so sometimes he’ll flat-out refuse to obey your commands, or just wait a few minutes before he decides to finally do it. A few puzzles in the game just seem unusually ill-designed; these are often due to paths forward literally being in front of your eyes, you just have to keep directing Trico to it until he decides to activate the one animation that’ll actually let you progress – this can sometimes take moments, other times minutes.

Another common frustration during gameplay is the camera, which has a habit of clipping inside walls, inside Trico, and sometimes if the camera bugs out really badly, it’ll just default to a black screen until it gets unstuck again. Of course, how would you know if you’re getting it unstuck if you’re just staring at a black screen? Who knows. 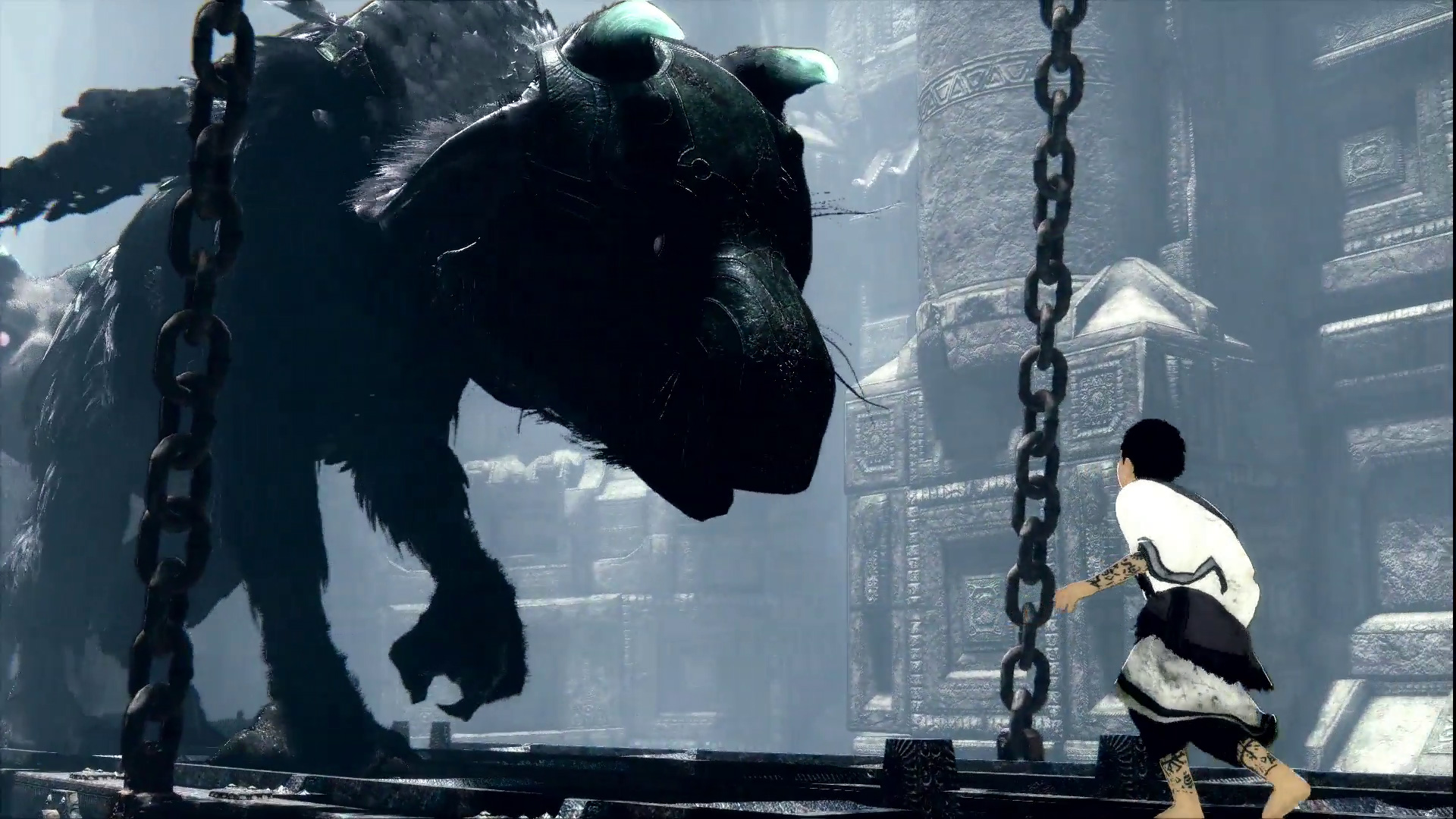 There are, however, elements that don’t feel anything like the previous two titles. Ico and Shadow of the Colossus are famous for having so little dialogue, but in The Last Guardian a narrator – who seems to be an older version of the player character, judging by how he uses the first person – will gives you “hints” at what you must do next, which is nice, but having the deathly silence interrupted by an unintelligible language is a bit distracting, to say the least.

Your character himself controls somewhat awkwardly, too. Every movement carries a heavy sense of inertia, which can become horrifically heart-stopping, particularly in tightrope-moments with no solid floor to be seen. The basic controls feel odd most of the time, but are a staple of the unconventional game design you see from GenDesign – the position of the buttons on the pad seem to matter more to the team than anything else. Triangle, being at the top of the four face buttons on your pad, is jump, Cross is at the bottom and is therefore to descend, and Square is near the center, so it’s used to grip things.

But The Last Guardian is more than the sum of its parts. The ancient ruins, the puzzles, they’re all a vehicle for the actual story to be told – and that’s your relationship to Trico. As I said, he’s a wild beast, he’s not a creature you raised from infancy – he’s a man-eating monster. But sure enough, the mutually beneficial, yet incredibly delicate, relationship that develops between the two of you is the real meat of the game, everything else is a vehicle to deliver that. 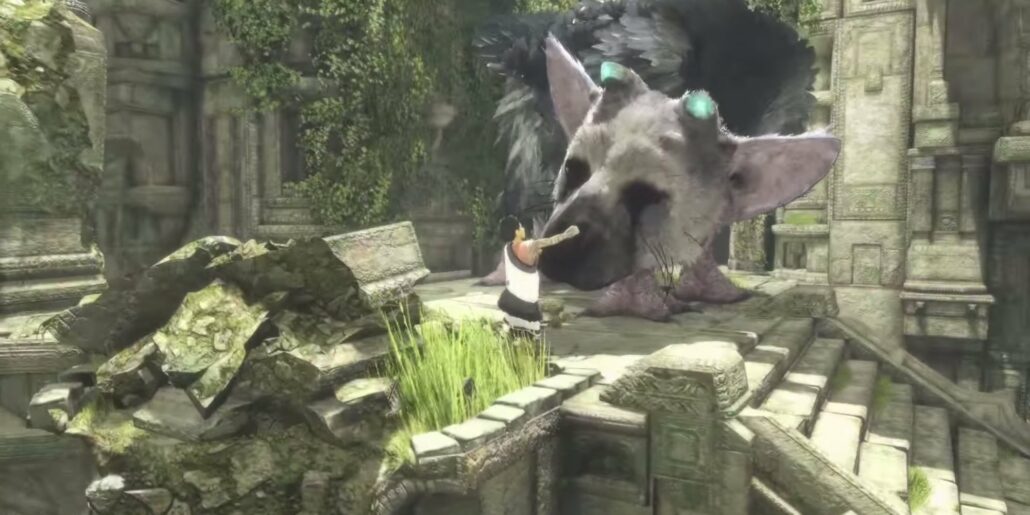 The Last Guardian offers something I don’t think I’ve ever experienced in games before – a relationship that feels very, very tangible. Trico implies so many things with his animations, his glances, his whines, the way he stomps his feet – he drips with more personality and charisma than any other game character in recent memory, and all of this can be put down to the fact that he’s not just an NPC, not simply an AI model you must direct about a stage, he feels like a friend. A special friend who cries when you are hurt, nuzzles you when you can stand, and demands his belly rubbed if you want him to do some jumps.

The Last Guardian is a game unlike any other, a journey of friendship, of loss, and of joy. It has its faults, but in ten, twenty or even thirty years time The Last Guardian will be remembered, when so many others will be forgotten, solely because unlike those, this is a game that will make you think and feel, instead of just act.

The Last Guardian takes you on an experience to see and feel things that no other game can. Essential for anyone who wants to see a game which pushes boundaries and genres.