Dwarves are interesting folks. They are rowdy, loud, drink a lot of beer and take pride in their luscious beards and centuries old traditions. Thinking of well mannered, learned dwarves is almost absurd, but getting to know such a character would certainly prove an interesting experience. That's exactly what The Dwarves offers: a charming main character who learns more about his race as he journeys to the land of Girdlegard to save the realm from annihilation.

The story of the Dwarves is definitely one of the game's best features. Based on the novel written by Markus Heitz, the game stars Tungdil, a young dwarven blacksmith who has lived his whole life in Ionandar, a human kingdom where no other dwarf lives. As such, Tungdil doesn't know much about dwarves, but this changes on a fateful morning when his foster father Lot-Ionan (one of the powerful Magi who protects Girdlegard from the dangerous evil stemming from The Perished Lands) entrusts him with an important task.

From the very beginning, Tungdil's journey is anything but simple: right after setting out, he unwillingly witnesses a meeting between orc armies and a mysterious Alp (a race despised by humans, dwarves and elves alike) named Sinthoras, who aims to bring the evil from The Perished Land into the realm. Tungdil's real destiny, however, is put in motion after the meeting with the twins Boindil and Boendal, who have promised the dwarven High King to bring him to Ogre's Death. From there on, Tungdil and several companions met under a variety of circumstances will journey from one end of Girdlegard to the other to save the world from destruction, witnessing first hand the consequences that the evil of the Perished Land can bring.

Being based on a novel, it's no surprise that The Dwarves is well written. The game sports a sort of novel-like presentation, with narration often intertwined with dialogues; this creates a very interesting feel that fantasy books fans will surely enjoy. Characters are also extremely enjoyable, and interaction between them, which happens quite often, is always fun and nicely written: it's hard not to smile when listening to the twins' comments on Tungdil's bookish nature or to Rodario's booming speeches. Despite being a rather run of the mill high fantasy story, detailing the rise to leadership and fame of an inexperienced and somewhat naive dwarf, there quite a few well-developed story developments, with one of the optional events challenging the player's morals in an interesting way. It's good that the story of the Dwarves is compelling, despite its lack of originality, as it has the job to carry the game along due to some gameplay and technical issues that make it less enjoyable than it could have been.

The Dwarves is a tactical role-playing game at its heart, featuring some interesting battle mechanics that are, sadly, not that well executed. During the game's real-time battles, players will have to lead their party of four heroes against hordes of orcs and other dangerous creatures, with heroes attacking automatically when close to enemies. Once enough action points have been accumulated for each character, you may unleash several special attacks coming with different properties. These special attacks are not only extremely powerful but also allow players to push enemies away and move them in certain directions. By doing this, it's possible to take advantage of the environment: depending on the location, players can push enemies down heights, bury them in the rubble of destroyed environmental elements and much more. The enemy can do the same with heroes, of course, so positioning and careful usage of those special abilities are both extremely important. When the action becomes too chaotic, it's possible to pause it and issue commands to all heroes, commands that will be executed when the action is resumed.

The "few against many" concept of The Dwarves is extremely interesting, but it doesn't work all that well. Most of the times, the action is so chaotic that it's difficult to keep tabs on all heroes, forcing players to pause often if they are playing the game on normal or hard difficulty settings. It's also difficult to understand which enemy is getting attacked by a particular hero, so a lot of battles end up just with a spam of the most powerful abilities once enough APs are available. Strategic possibilities, which should have been the highlight of the battle system, are somewhat limited and you can't even check out a battle map in its entirety when the game is paused, which limits a player's ability to plan moves tactically. When brute force is, in most cases, the best way to go, employing a tactical battle system probably wasn't the best choice: perhaps a more action-oriented system would have done wonders. It's a real shame because many of these mechanics have a lot potential. Despite these issues, battles still manage to be somewhat enjoyable thanks to a good variety of combat scenarios, which include objectives such the usual "defeat all enemies" and " defeat the boss" objectives, as well as more specific ones such as having to to reach specific parts of the map, killing a specific enemy, protect NPCs and much more.

Despite being a role-playing game, The Dwarves' RPG mechanics are definitely underdeveloped. For starters, customization possibilities are extremely limited: after reaching certain levels, it's sometimes possible to choose between two different skills to learn, which can be added to the character's loadout before each battle Some of the special abilities, however, are extremely similar, so it's hard sometimes to differentiate between characters. Players are also unable to customize characters' equipment, only having the ability to equip them with one item that has to be assigned as part of the loadout.

With the game being mostly focused on battles, it's not surprising that that exploration in The Dwarves is quite limited.Traveling on the world map is done by selecting between different nodes, which may include extra battles and optional events. Some specific locations can also be explored and a few of them feature very basic puzzles, which mostly involve activating magic objectives and using items in a certain order. During these short exploration sequences, you can highlight all the hotspots by pressing a specific button, so it's very difficult to remain stuck for long in these sequences.

While it's definitely possible to look past the battle system issues and under-developed RPG mechanics thanks to the game's story, it's much harder to do so with the technical issues plaguing the game. On PlayStation 4, The Dwarves runs very badly, with a frame rate that goes all over the place. This results in very sluggish controls in battle, noticeable screen tearing, micro freezes during particularly hectic battles and even sound glitches during a late game battle, making the game quite frustrating to play. Generally, the game also doesn't look all that good on PlayStation 4: for a high fantasy game, colors are much too muted in more than a few occasions, taking away some of the magic suggested by the decent art direction. Cutscenes are, on the other hand, charming due to the characters being animated in a way that's almost reminiscent of stop-motion techniques. Albeit short, they are also quite lively, giving the right emphasis to important story beats. The soundtrack is also more than decent, with a few epic pieces playing during battles that are well suited to the on-screen action, enhancing immersion. A surprise guest appearance by one of the most popular German metal bands ever, Blind Guardian, and competent voice acting are the icing on the cake.

At the end of the day, I found The Dwarves a difficult game to score. I did enjoy my twelve hours or so with the game, but I am well aware that I enjoyed them mostly due to the story and characters, as the gameplay is not particularly brilliant, with its chaotic battle system and underdeveloped RPG mechanics. Considering all the technical issues found in the PlayStation 4 version, The Dwarves can be recommended only to the most die-hard high fantasy fans who are willing to look past all of the game's issues for a gripping story and charming characters. Tungdil's story doesn't end with the first novel of the saga, however, so I sincerely hope King ART Games will have the chance to adapt the following novels to fix some of this game's shortcomings.

Reviewed on PlayStation 4 (code provided by the publisher). Game also available on PC and Xbox One. 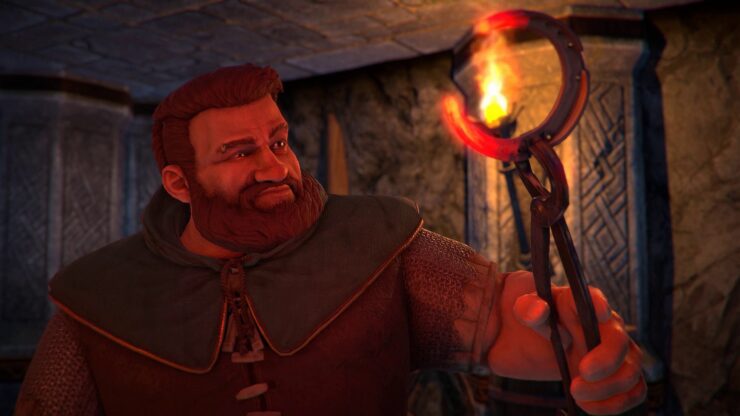 The Dwarves is a role-playing game that fails to reach its full potential. Its interesting battle concepts are marred by a mediocre execution, very limited RPG mechanics, and just too many technical issues on PlayStation 4. Despite this, the game still managed to be somewhat enjoyable thanks to the gripping yet not too original story, and charming characters. Due to gameplay and technical shortcomings, however, only die hard high fantasy fans may find some enjoyment in The Dwarves. Everyone else would do better in looking elsewhere.