Terminator: Resistance Enhanced is not a good game, which may or may not come as a surprise to you. First released at the tail end of 2019, this first-person shooter set during the grimdark Future War received aggressively middling reviews. Since then, it has found a cult following large enough to warrant a next-gen re-release, but nothing has actually been done to improve the game's explosive mediocrity.

It looks good on the PlayStation 5, or at least the environments do. The bombed-down greys of an annihilated America look crisp, dirty, and interesting. The characters still wander off towards the uncanny valley from time to time, especially their speaking and walking animations that make you suspect if they’re actually human. Still, the look of the game is not the issue here. Rather, Terminator Resistance Enhanced is a game stitched together by large and small issues that overwhelm any sense of place or excitement it tries to invoke.

It is a game out of time which, however ironic, makes it tedious to explore, boring to fight, and confusing to engage with on every level. While there are none of the technical issues that so often plague new releases, that in and of itself is hardly a reason to play this game. At the start of the game, you’ll have to escape a brutal assault of Pasadena by the forces of Skynet, but you never actually see this grand battle playing out. Instead, you experience corridors of rubble and debris patrolled by a splattering of weak enemies, with the promises that something huge is happening just over the fallen skyscrapers. It’s a trick that’s been used since Half-Life, but Valve pulled it off more convincing twenty years ago. The entire experience feels like it is trying to hearken back to a time before games could have several enemies on screen at once, but with none of the charm or intelligence to hold it together.

From the first level, Terminator opens up to a maze of corridors disguises as broken cities. You can tackle objectives in any order and take on plenty of side quests, but you don’t really get the sense the game is a wide-open expanse of possibilities. Instead, you’ll be funneled down corridors and towards small arenas where robots will be waiting to shoot at you in short bursts. The combat could charitably be described as uninteresting, but often it's just downright boring. Even the smaller robots take plenty of bullets to die, but they rarely feel like a threat in themselves. You just need to find a good position using the rudimentary stealth mechanics and then keep firing until they explode. Often, it feels like Terminator: Resistance Enhanced is aware of this, given that there are explosives that can immediately end the fight in every arena so you don’t have to waste any time unloading clips into robots.

Selecting a weapon is done through an inventory wheel that is for some reason tied to your left thumbstick, forcing you to awkwardly strafe as you change weapon, occasionally making attempts at the completely obsolete stealth mechanics. On top of that bizarre choice, the weapon animations and controls feel terrible. Walking with your gun on your hip has a kind of strange stiffness to it, almost completely detaching it from the more organic environments it's floating in front of. And when you are aiming, the gun moves like it's being dragged through crude oil. You feel like it's resisting your attempt to aim at the Skynet bots as if it might have a secret mechanical allegiance to the synthetic overlords, and there doesn’t seem to be any way to improve that on PlayStation.

On top of the gunplay, you’ll also find fragments of other mechanics standing in your way. Despite the general devastation of the world - not to mention the armed robots whose sole job it is to hunt and kill organic life - there are a surprising amount of locked doors in your way which you’ll have to pick if you want the trade goods and ammo that inevitably await on the other side. The lockpicking minigame is the same one you’ve played in a thousand other games, though, and only serves to remind you that you could be playing Fallout instead right now.

In some areas, you’ll also be talking to your surprising chipper band of fellow humans. These guys are possibly the most interesting part of the game but still feel flawed throughout. Dialogues are often choppy and strange, often lacking any real personality or nuance. When you’re talking to these survivors, you’ll regularly be asked to make a choice on your reply. The game will tell you that these choices have consequences as it desperately tries to draw on the appeal of games like Bioware's or Telltale's, but they miss the mark. These choices don’t come up regularly enough to feel that you have any actual control over the conversation, and the options are seemingly always between being nice and being an unnecessarily cruel jerk. These choices can alter some aspects of the later game, but honestly, you’ll struggle to care and don’t exactly have to make any tricky decisions anyway to get the ‘good’ ending.

The biggest problem with Terminator: Resistance Enhanced is that it doesn’t do anything. It doesn't attempt to experiment in any meaningful way. It is a return to the rushed and unimaginative movie tie-in games that exist to moderately entertain diehard fans for a few hours after they’ve seen the films. Everything this game does has been done before, and better. It doesn’t even do much with the Terminator license either, barely exploring the mythos or any of the questions the films once used to raise.

The Infiltrator Mode where you get to play as one of the terminators is much the same, albeit at least slightly more self-aware (pun not intended). You can find caches of iconic Terminator weapons as the game winks at the player, but alas, the combat is still basically the same except now your enemies bleed. And if it bleeds, we can kill it. Wait, that’s the wrong franchise. 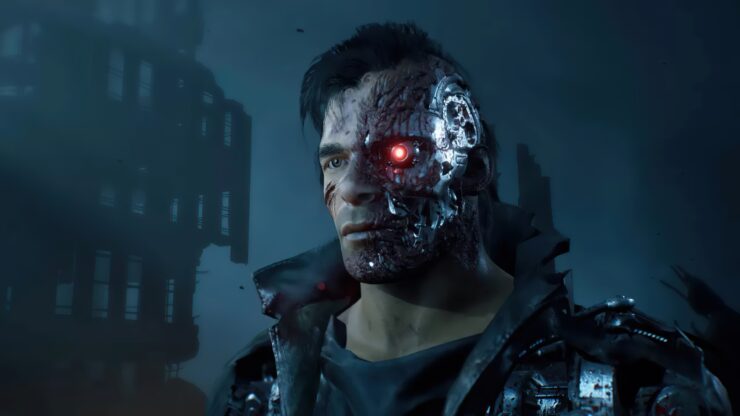 Terminator: Resistance Enhanced is not a good game. It is a perfectly average title from a decade or two ago that is somehow being released now. Despite its relatively shiny graphics, there is nothing interesting beneath the chrome.