TERA is by no means a spring chicken when it comes to MMORPGs, but it has far outlasted some of its contemporaries and for good reason. Boasting one of the few combat systems that feel like a proper action game, some might wonder how a seven-year-old MMO handles the transition to next-generation consoles. That wait is finally over with the recent release of TERA on both PlayStation 4 and Xbox One. Can this MMORPG’s luster still shine through after years of polish? 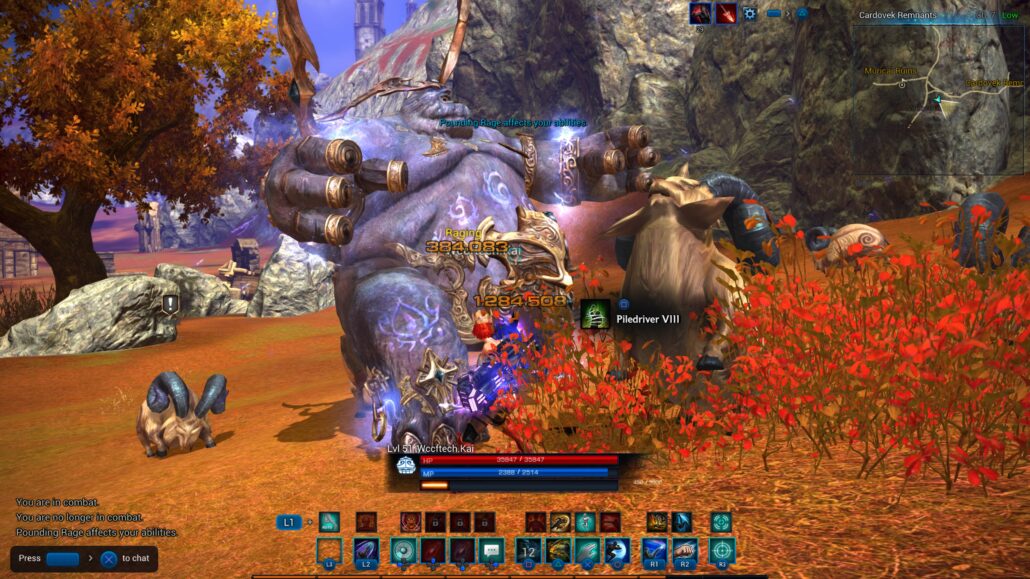 The character designs to TERA always felt strangely over sexual to me and initially tempered my interest when it first launched on PC so many years ago. While the diverse roster of humanoid races seems fine, it’s the costumes and sincere lack of battle attire that feels out of place in this fantasy realm. I had to make my first female character (in order to play the Human Female-exclusive Brawler) and was a bit weirded out by the costume choices. In any other fantasy realm, I would’ve been laughed right out of the tavern for suggesting that having more exposed buttcrack would make me a better tank. The Elin race isn’t much better, catering to an entirely different demographic for quite obvious reasons. It’s a shame that some of the more interesting classes to TERA (Reaper and the yet-to-be-released-on-console Ninja) are locked behind a race that solely consists of girls that look like little kids.

If there is only one reason to pick up TERA amongst the other MMORPG’s that are making their way to console, it would have to be the combat. For my review, I stuck with the Brawler, a hybrid tank/DPS class that’s limited to Human females for some strange reason. This class felt great for taking on multiple foes and juggling them in the air with a flurry of blows or pulling in L2 to switch to a defensive stance and absorbing all incoming damage with a perfectly timed dodge. Some may say the Brawler is a braindead class, but it’s become the only tank that I’ve liked to play in an MMORPG because of how fast and free-flowing its combat style can be. Survivability of the Brawler felt second to none and between the powerful blocks, self-regenerating heals (with a decently long cooldown) and being able to air juggle enemies throughout lengthy combos, the various tools at their disposal felt like nothing else I’d played in an MMORPG before. 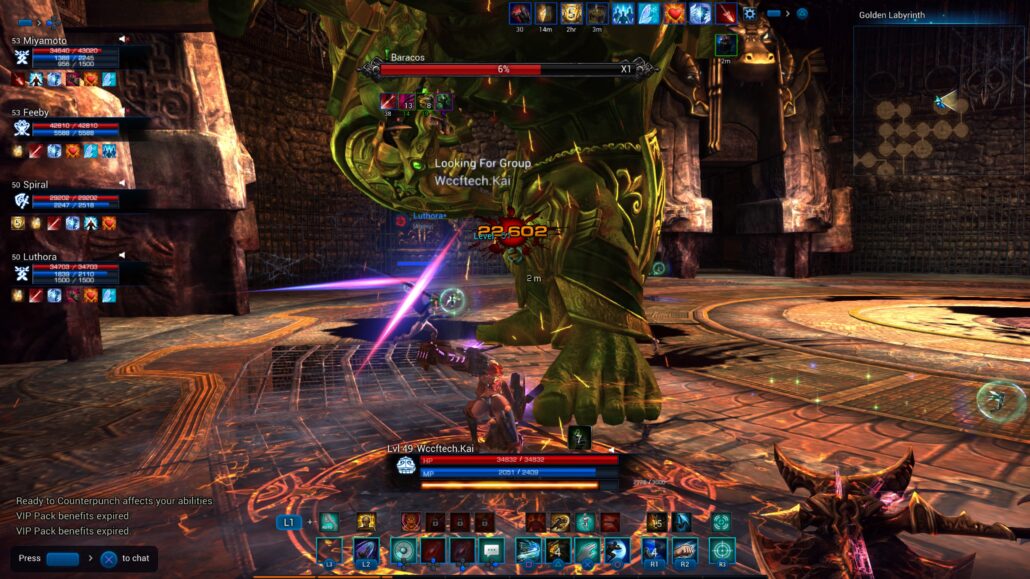 With no typical lock-on system and a wide variety of skills that target an open space, positioning and gauging distances are an incredibly important part of combat. When I was pulling enemies to solo as a brawler, I felt like I was wasting my time if I wasn’t fighting at least five at a time. Every aspect of the ‘True Action Combat’ makes the transition to console well and the ever-changing stance between attacking and timing a perfect dodge as Brawler feels great. This is perhaps the closest we’ll get to a proper MMORPG with the combat of a Platinum game.

Respecting the player's time is something that most MMORPG's tend to shy away from. After all, it's easy to keep a player coming back for longer if you keep stretching out the time it takes to level or acquire a new piece of gear. TERA goes well above and beyond by constantly giving the player new opportunities for gear at a rapid pace. Through Vanguard Requests, a player can take up to eight quests or dungeons a day for guaranteed gear as well as an insane amount of experience and gold. This was the main source of my experience in dungeons for my review and with the TERA Elite membership that came in my Founder's Pack, I could quickly teleport to the next quest area and continue the grind. Even as a first-time player, I made it to the level cap within four days on top of tracking down every world boss.

The shift to free-to-play from a paid product doesn’t always balance out well, but I feel like the folks at Bluehole have done a fine job of striking that middle ground. No story or dungeon content is actually locked away from the player if they don’t spend the $15/month on Elite Status. Instead, it’s all various forms of timesavers and performance boosters to get to the fun parts sooner; as they say in the entertainment industry, ‘Time is Money’. Between the XP boost for having Elite as part of my review copy (for disclosure: my review was based on the $30 tier of TERA Founder’s Pack), I was able to max my Brawler’s level and experience most of the dungeons in only a few days despite being my first time playing TERA. If you’re just looking to play casually or at your own pace, I saw no reason not to enjoy the entire game free of charge; TERA is free-to-play done right. 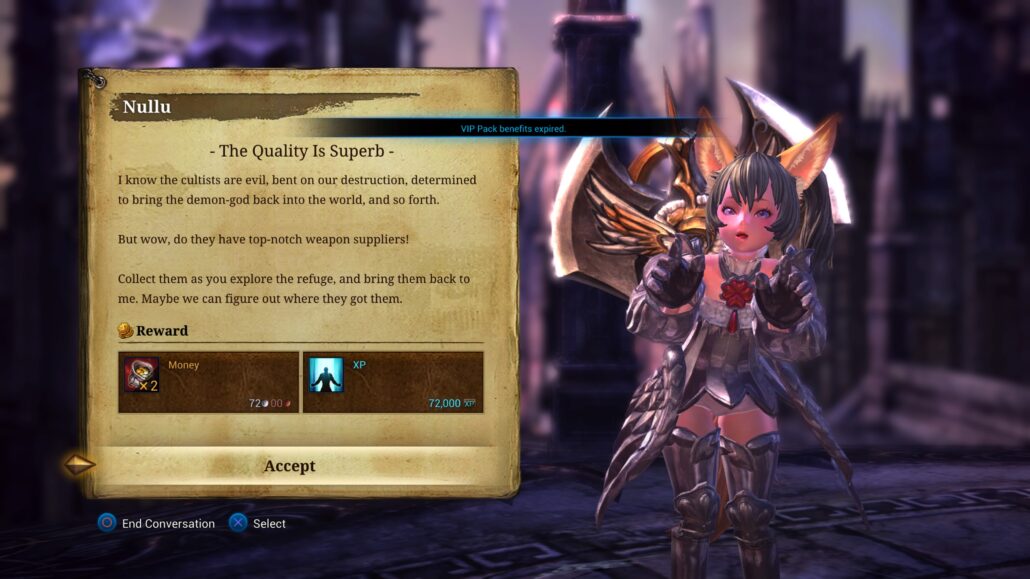 By the time TERA’s launch arrives on PlayStation 4, it won’t be on parity with the PC version. There’s roughly a year’s worth of patches for the console versions to catch up on (including a few additional classes to play as), so while the content might not be all there ahead of launch, there’s plenty for En Masse and Bluehole to keep infusing the console versions with over time. Strangely omitted from the PS4 release is a PVP mode below the max level that’s actually worth playing. What’s available to players now is a strange team deathmatch of baby Kumas that are as ugly as they are unwieldy to control.

TERA’s performance on PlayStation 4 Pro is somewhat of a mixed bag. Most open fields and areas where players will spend most of their time out doing quests or gathering materials run fairly well with the occasional frame pacing issue or hiccup in performance. However, the performance quickly and severely drops down onto the negative end of the spectrum once more action comes on screen. Velika, the primary social hub of the world of TERA, chugs and lags behind even during the Early Access periods before the floodgates open to the general public (I dread to see how low the FPS can go once more people start playing). Dungeons are equally as divisive, as many of the dungeons I explored in a party up through level 50 seemed to handle the transition to console smoothly. Unfortunately, any of the more technical boss fights can quickly turn into a slideshow and flip the equation into Seconds per Frame. This is in addition to warning messages that pop up every few seconds warning me that 'VIP Pack benefits expired' that leads to frame hitching every time. Playing a tank in these situations, especially an active tank like the Brawler class relies less on skill parts and equal parts luck and the ability to spam defensive abilities until the performance gets back to normal. 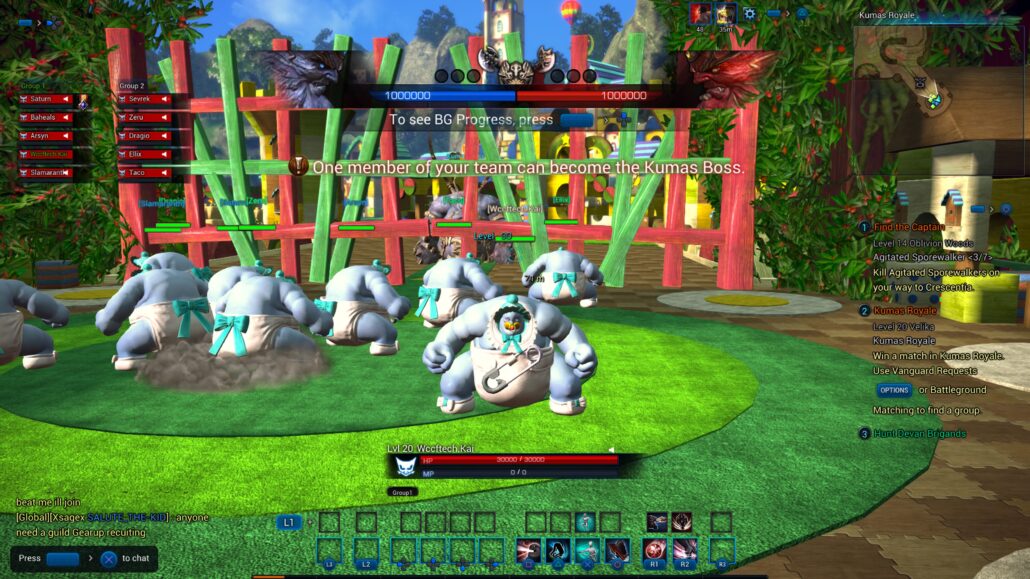 Another glaring performance issue on PlayStation 4 for trophy hunters, in particular, to look out for is the trophy support for TERA. Most of the trophy list is straightforward: work all the way up to level 65, clear out a majority of the party dungeons, and most difficult of all, taking out every named world boss on both continents. During my review, I earned most of these during regular play and would be one world boss and two dungeons away from the platinum trophy. Unfortunately, a day prior to TERA going live, most of the trophies I earned refused to unlock. Speaking with a few other players that started TERA early with a Founder’s Pack, it sounds to be an issue affecting a number of players on PS4. If you’re looking to add more trophies to your collections from this free-to-play MMORPG, you may wish to hold for confirmation that a patch has fixed these issues.

TERA is an absolute blast to play and might finally convince me to play a tanking role in future MMORPG’s. The action combat is single-handedly the best reason to get in and check out TERA even as a casual player that doesn’t want to focus on whatever endgame means to them. Bluehole has set themselves up a solid foundation for the console releases of TERA, and while the launch is off to a rocky start and performance issues can choke an otherwise perfect dungeon run, it can only get better from here.

Reviewed on PlayStation 4 Pro (Founder's Pack provided by the publisher). You can purchase the basic Founder's Pack for Xbox One here.

TERA's console launch may be off to a rough start, but the amazing combat system should keep players coming back for more, even for players that just want to enjoy an MMORPG without paying a dime.