Tempest 4000’s sudden arrival was something that caught me off-guard, even as someone that follows Jeff Minter’s llama-centric antics on Twitter. This updated release of his signature game had been coming in and out of the gaming news after first being announced at 2017’s Gamescom conference. His history with Atari had been rather strange after TxK came out on Vita. From that point on, Jeff Minter’s work with the Tempest project seemed like it was done forever until that press conference last August. Now nearly a year after its first unveiling to the public, Tempest 4000 has finally arrived on Sony and Microsoft’s home consoles as well as Windows PC.

The core formula to Tempest 4000 hasn’t changed since Jeff Minter first remade Dave Theurer’s classic Tempest with a lesser known release on the Atari Jaguar, Tempest 2000. Guiding your ship around geometric prisms and blasting away at whatever manner of alien foe crawls out from the dark tempest hole below is still as satisfying as it was so many years ago. Not having a Spinner controller might keep Tempest 4000 from perfectly emulating that arcade sensation, but a DualShock 4 controller works just as well for quickly navigating from one side of the field to the other.

Tempest 4000 still retains an arcade level of difficulty for its PlayStation 4 iteration, and while you’re not pumping in virtual quarters every time you see a game over screen, expect to be thrown back to the title menu with extreme prejudice. Every level in Tempest 4000 features its own layout and predictable pattern of encroaching enemies and taking the time to learn these patterns is key to making it through the deeper layers. You won’t always have the same experience every time as the powerups that certain enemies drop will be randomized from a wide pool of upgrades that last that particular stage, from an autonomous AI shooting companion to faster firepower and even the ability to jump ahead to a later stage.

The enemy AI to Tempest 4000 can be downright brutal to new players. Dozens of enemies can stream in and if you’re not managing your crowd control, you’re going to get trapped at the end of the playing field with an entire crew of Flippers on your butt. In each level, you’re given a single ‘get out of jail free’ ability by way of a Superzapper, a board clearing special ability that’s persisted in every iteration of Tempest since the beginning. In addition to this one-time-use ability, other power-ups can appear after defeating random enemies and bestow upon the player a variety of score enhancements and additional firepower for that particular level (my personal favorite being the AI droid since it can save me from getting captured by a Flipper).

I’m still as stubborn a Tempest player as I was when I first played the game in arcades growing up. Those years have ingrained poor habits in me and I still find myself getting overwhelmed by taking on the wrong foes and not prioritizing taking out the much faster-moving ones first. Tempest 4000 has a very exact science to its level design that I can crack in occasional moments of genius. However, more often than not, I still get blasted into submission before I can even make it to level 20. In true Tempest fashion, you can always skip ahead to starting at a given stage but for players like myself that still care about earning PlayStation trophies, our pride will keep us from doing so.

While it isn’t quite on the level of Lumines and being able to induce synesthesia in players, Tempest 4000 invades players’ space with an all-out assault on the visual cortex. Enemies explode in rainbow-colored polygons and pixels, often covering the playing field in a multitude of light. If you’re one to suffer from epilepsy or headaches from gaming, I’d recommend turning down the brightness on your TV if you still plan on enjoying this vibrant arcade shooter.

Tempest 4000 once had the grandiose idea of seeing these 2D planes fully realized in PlayStation VR. Seeing the reception to early builds of The Tetris Effect have shown that this concept can, in fact, work in a VR space. Unfortunately, any plans to do so were scrapped early on in the project’s development for reasons not easily made clear. I shouldn’t knock any points off for what could have been, but it is disappointing to note that there could have been something truly special about Tempest 4000 that would have made it stand out among Jeff Minter’s other pet projects.

If there’s one thing to be wary about with Tempest 4000, it’s the price of entry to get your hands on a copy. Thirty dollars is a huge asking price for an arcade classic when many retro resurgences come out at half that price (even Pac-Man Championship Edition 2 launched at under $15). If that price point doesn’t scare you off, I’d recommend picking up a physical copy from Play-Asia that will launch at the same price (with the added bonus of being presentable on your shelf and could be a future conversation piece). You’ll get a hundred levels of geometric playing fields to blast away at, but your mileage may vary for getting thirty dollars worth of enjoyment on Tempest 4000.

Atari and Llamasoft's collaboration on Tempest 4000 won't convert any new followers over into the ways of Tempest. Jeff Minter's team has perfected a game that has persisted through the ages by keeping it true to the original formula and adding in new treats for your eyes and ears. If playing Tempest on the latest gaming hardware excites you enough to open your wallets, you'll find a new classic in Tempest 4000. 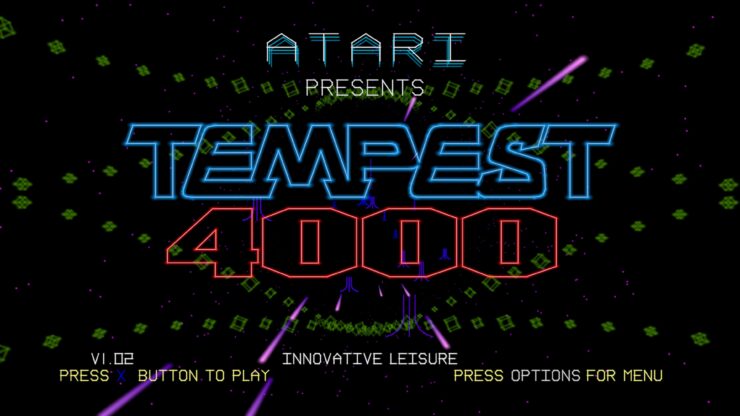 Jeff Minter's latest interpretation of this arcade classic still holds up as one of the best versions of Tempest to date, although the price and lack of changes from TxK both make it a difficult purchase to recommend at $30.