Since the arrival of DDR4 memory in the mainstream market, Teamgroup started a separate line of DIMM kits under their new T-Force brand. The T-Force brand is the more enthusiast and gamer aimed memory series with a sheer focus towards quality and performance. Today, I will be testing one of T-Force's new XCALIBUR RGB series memory kit, the latest in their T-Force gaming series arsenal and see how it holds up in against similar priced and similar spec'd memory kits.

Teamgroup sent me two of their latest T-Force XCALIBUR RGB series DDR4 memory kits for this review which I would like to thank them for!

The Teamgroup T-Force XCALIBUR RGB 16 GB DDR4 memory kit rocks decent specs for its price. The kit we received is optimized at a clock speed of 3600 MHz (PC4-28800). The memory kit consists of dual 8 GB DIMMs which make up a total of 16 GB in capacity. There's also a higher spec'd kit which comes in at 4000 MHz (PC4-32000) frequencies. Some features of the T-Force XCALIBUR series are listed below: 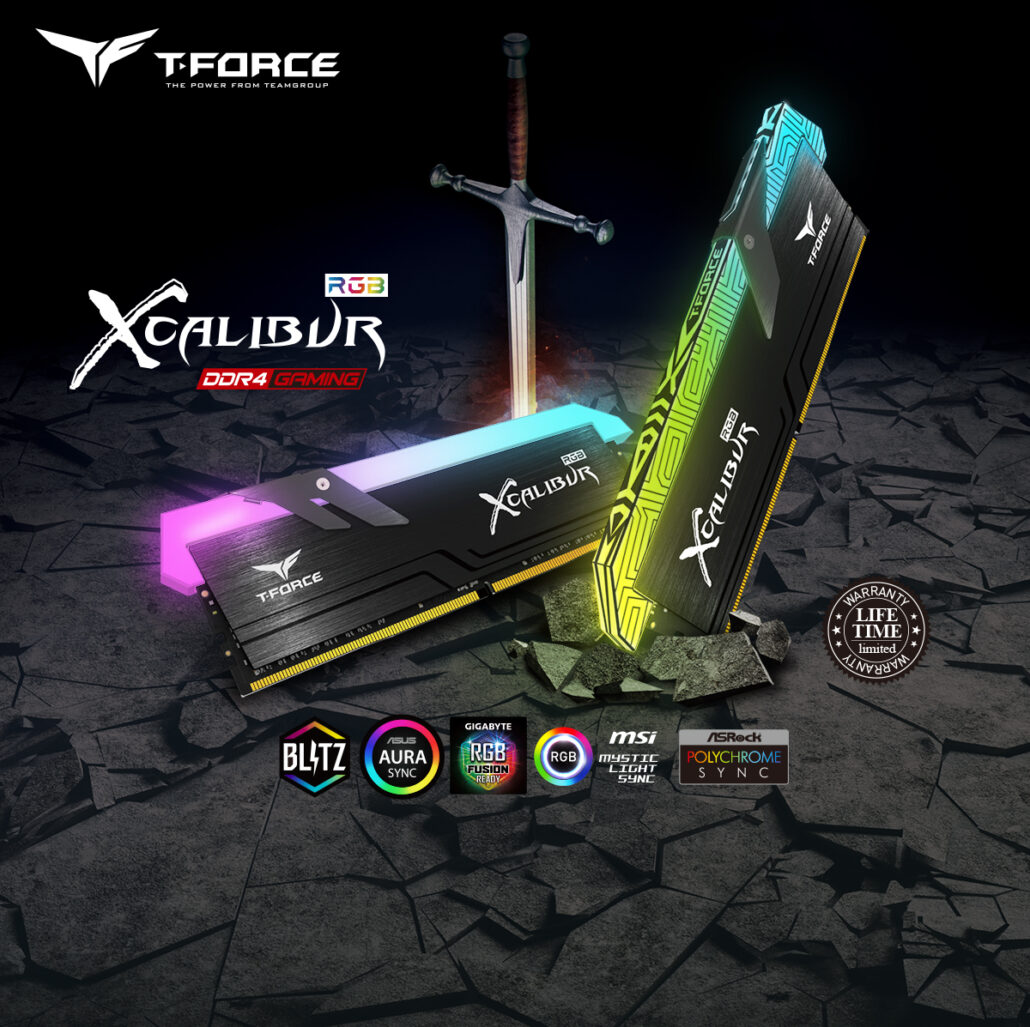 The memory kit has a tested latency spec of CL18 and the timings are 18-20-20-44-2N for this specific kit. Voltage set at reference is 1.35V and the memory kit comes in an unbuffered package with non-ECC (Error Correction) design. The memory kit is fully compliant with Intel's XMP 2.0 and can be easily set to its rated clock speeds through the BIOS shipped on the latest Intel motherboards.

The T-Force XCALIBUR series comes in a nicely designed box-shaped package. It has red and black accents all over. The front of the box has the name and specifications sticker along with a picture of the DDR4 stick with the main focus over the latest implementation of RGB LEDs. Note, we got two kits but tested one of them for the review for fair comparison against other 16 GB memory kits. We did test both kits with our new X399 platform review which you can check out over here and there's more to come on that so stay tuned. 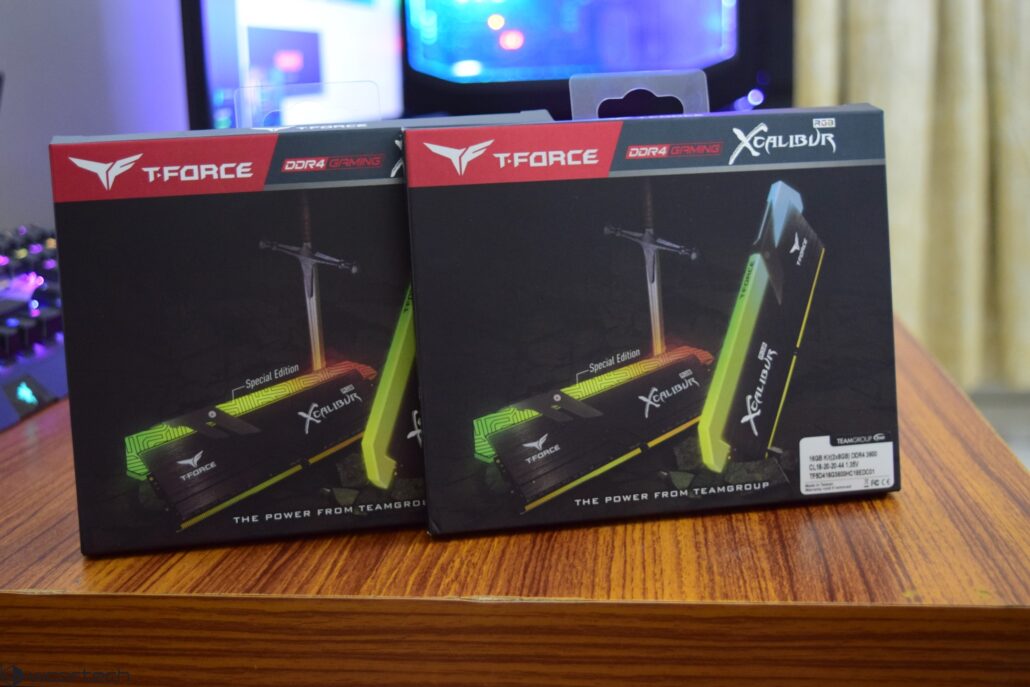 The back of the box lists down a brief overview of the T-Force brand along with detailed features of the T-Force XCALIBUR RGB series memory. The product label and RGB features and sync support with various motherboards are also listed. It's mentioned that the kit comes with a lifetime warranty which is another plus for users building new DDR4 setups. 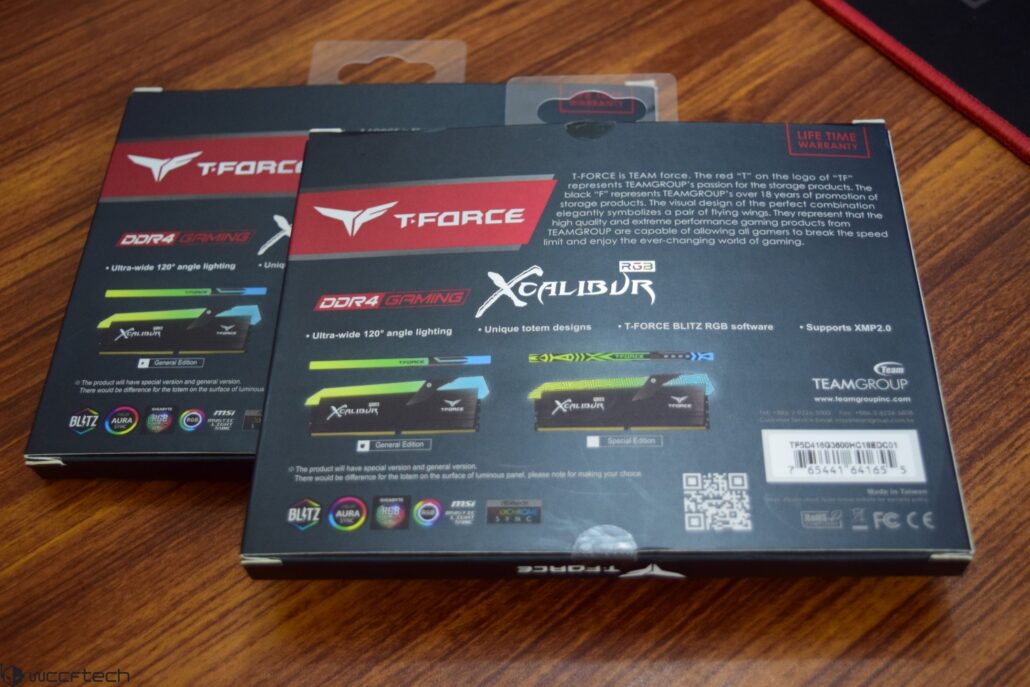 Opening the box, I am met with a large plastic container which firmly holds the two DIMM sticks. I also noted that these are some pretty heavy DIMMs when compared to the ones we have used earlier. This could be due to many things which I will reveal in a bit. 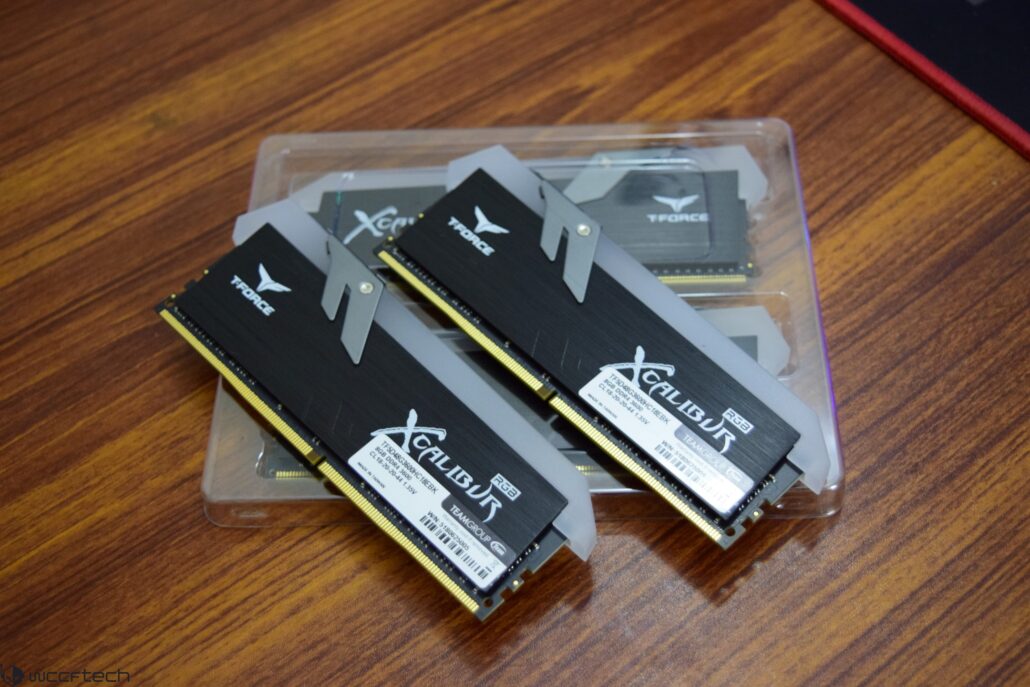 Removing the plastic cover, I put my sights upon some on an impressively designed DDR4 memory DIMM. To be honest, credit goes to memory manufacturers like T-Force who are continuously offering great designs on their latest memory kits which exceeds their previous efforts. The metal heat spreader does have a slight touch of the Trident Z series from G.Skill but it looks great. 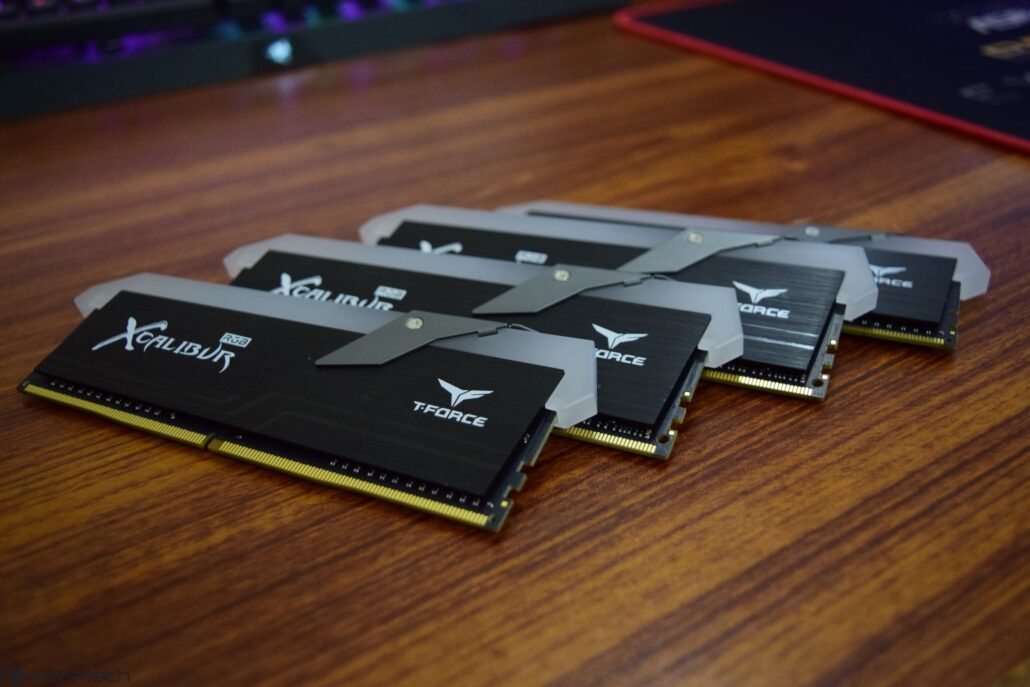 There's also a "User Installation Manual" inside the plastic casing. Although installing memory isn't a big deal but it's still nice that companies like Teamgroup focus towards educating the general consumers of how to install PC hardware properly, even if they aren't doing it for the first time. 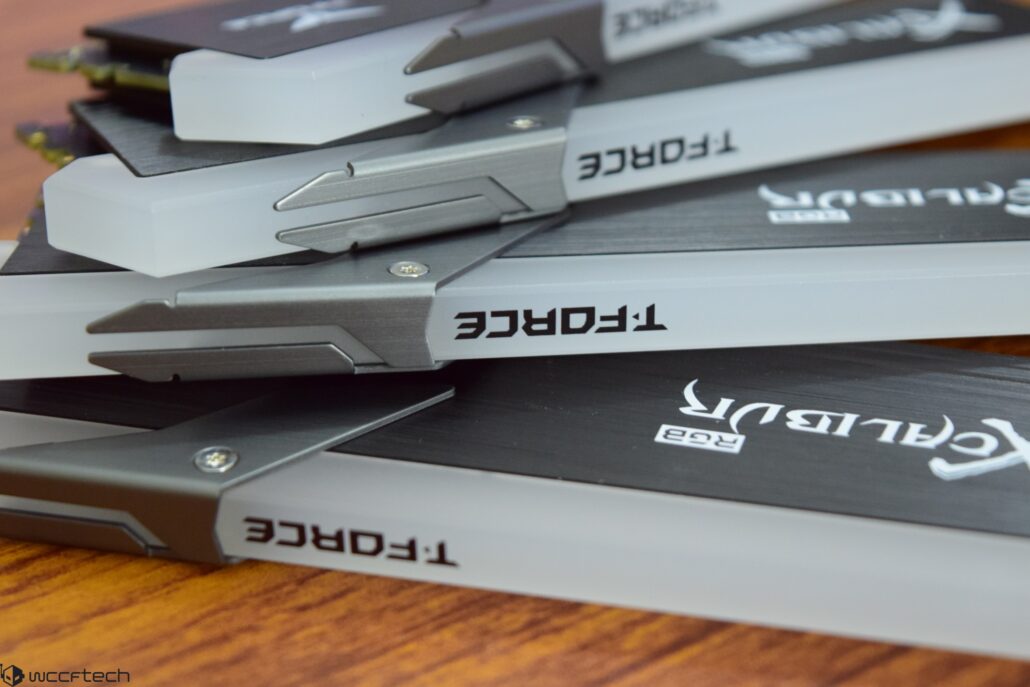 The black colored, brushed aluminum shroud and the LED accent bars look great. The entire LED is spread over the top with the T-Force logo placed near the left side of the DIMM stick. A metallic frame holds the shroud and stick in place and gives a nice design impression. 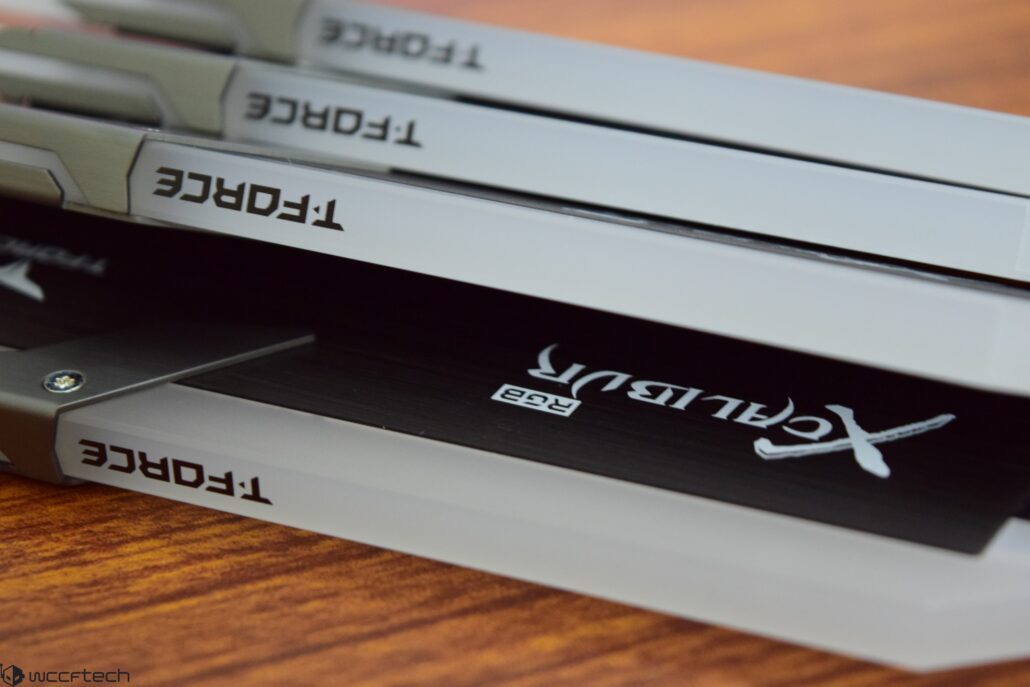 Now for the weight, yes these are very heavy memory sticks and I am surprised by the reason. Not only are the DIMMs using top of the line Samsung ICs on a high-end PCB, but the shroud is also all aluminum based. This increases the overall cooling capacity of the specific modules and also prevent memory from external forces such as pressure, air, and dust. The LED Lights are embedded in the upper section of the memory and look absolutely great when lit up. 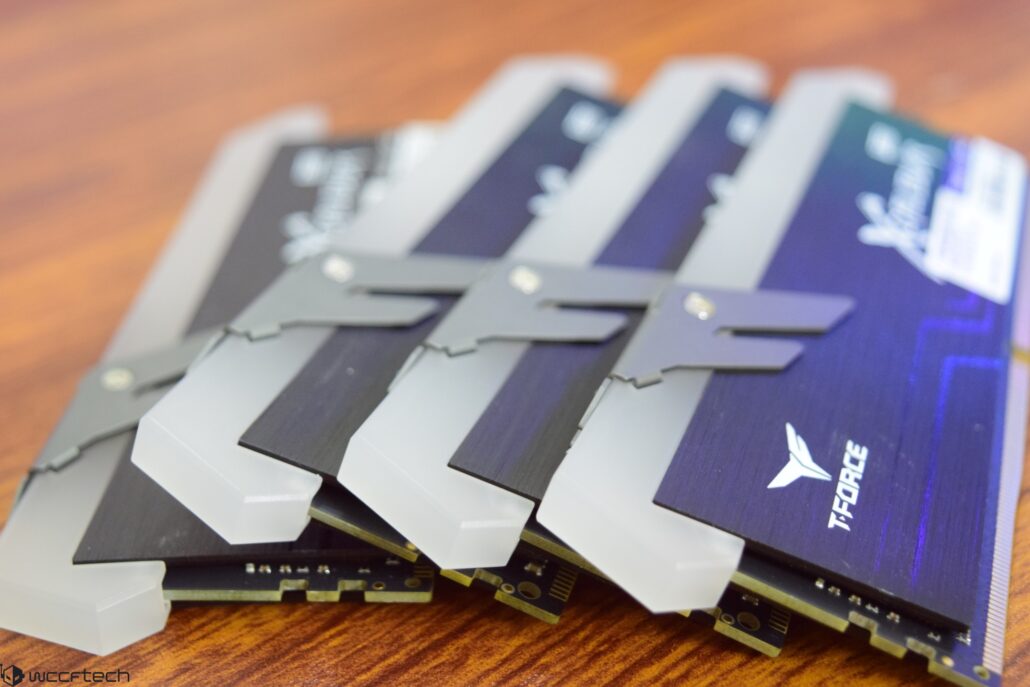 For testing, we used the latest Intel Core i7 8700K processor which is fully compatible with higher speed memory like the Teamgroup XCALIBUR RGB DDR4. The motherboard used was a GIGABYTE AORUS Z370 Gaming 7 and we booted the memory without any issues. The XMP profile to enable the 3600 MHz frequency had to be set from the BIOS which wasn't a hard task. The new 300-series motherboards are fully compatible with the fast DDR4 DIMMs. 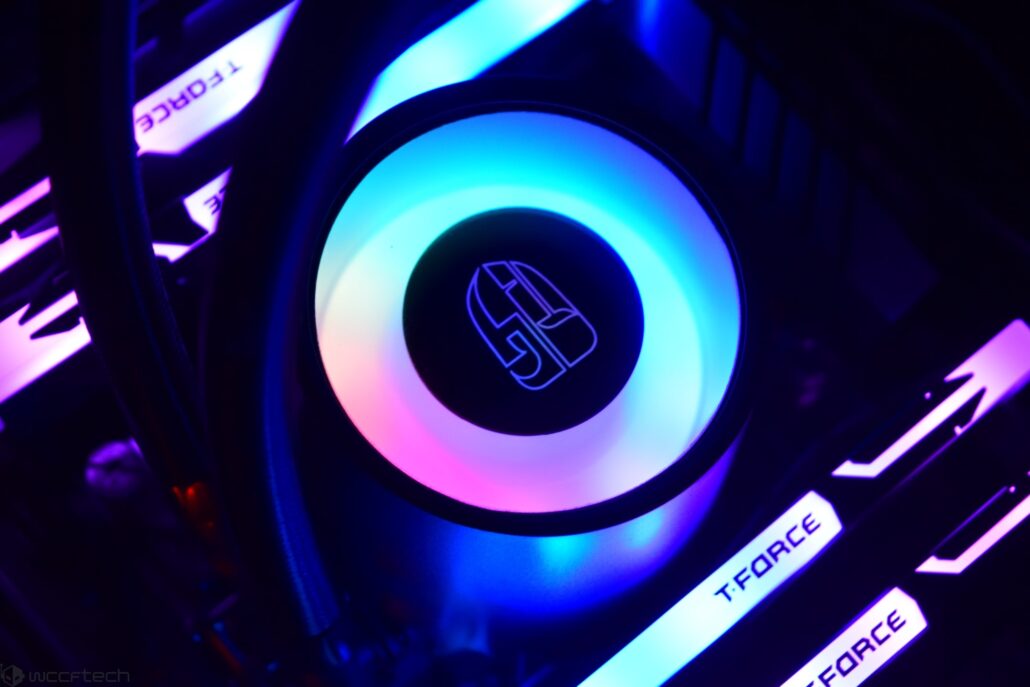 The memory kit comprises of 2 DIMMs that operate in dual channel mode. Since we were running a Z370 platform, the memory was operating in dual channel mode. The memory is clocked at 3600 MHz and will run at 2600 MHz be the default when XMP profile is not enabled since that is the JEDEC standard clock speed. Clock timing is set at 18-20-20-24  (CL18) and the capacity is 16 GB for this specific kit. 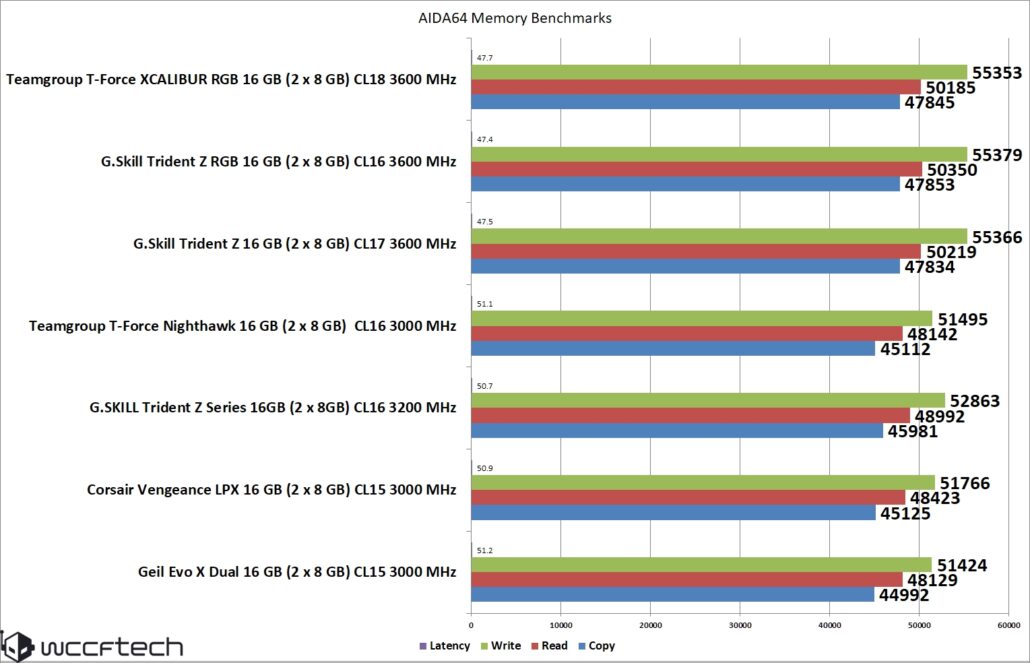 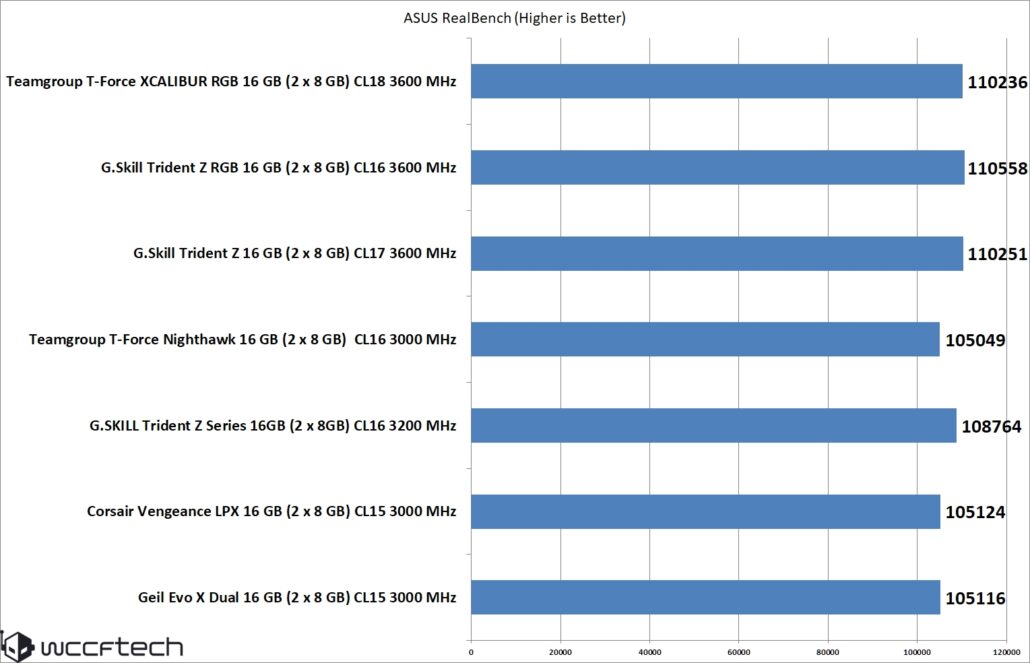 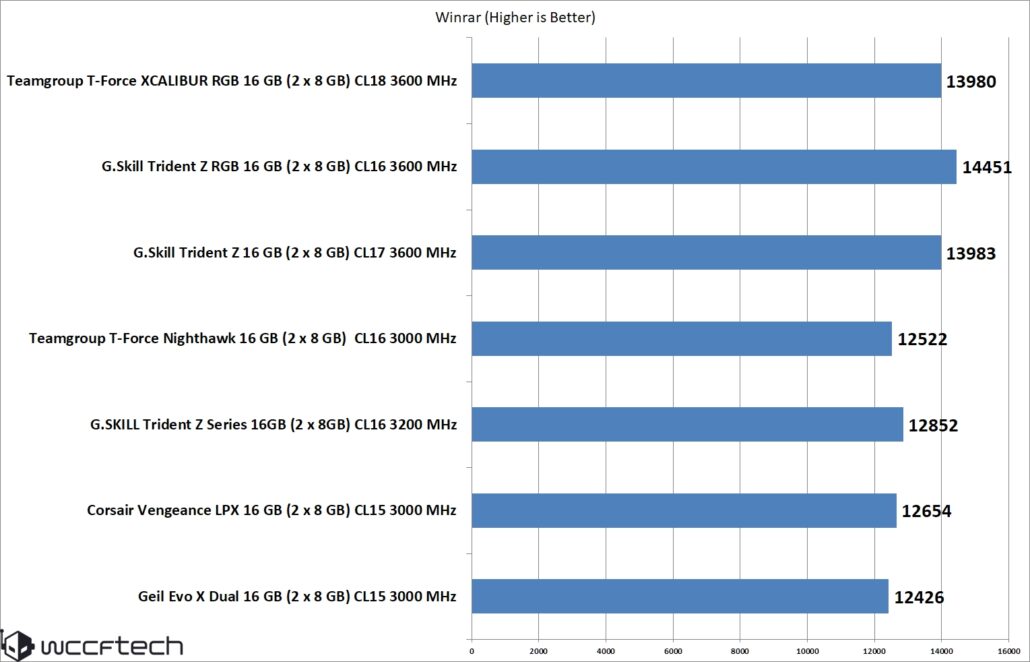 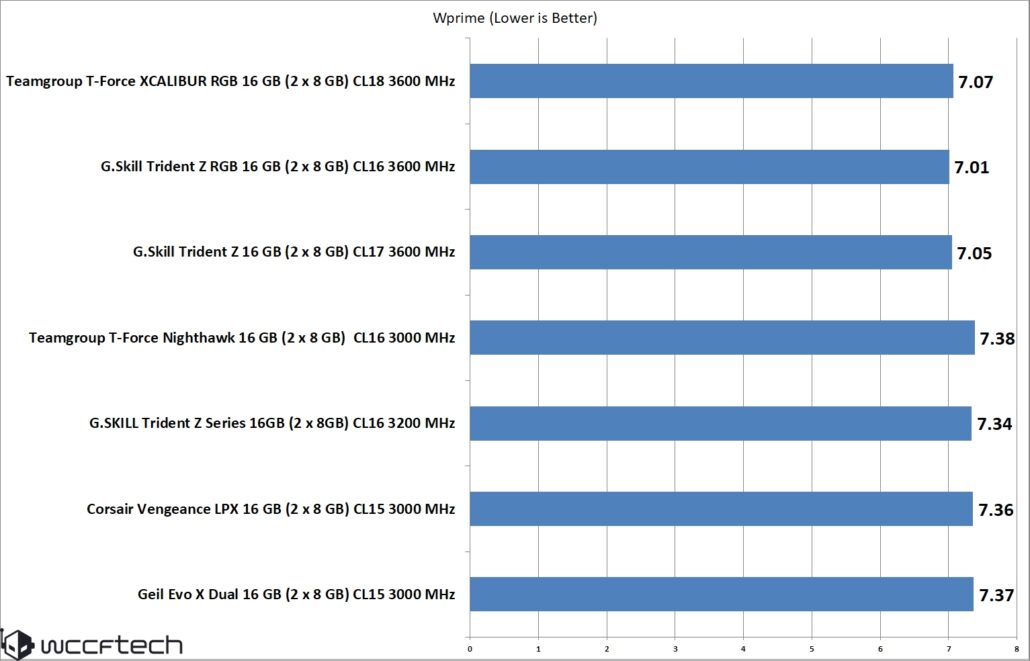 Gaming applications generally don't see huge gains with different memory kits but DDR4 has enabled a huge gain in memory frequency which can impact gaming performance. Moving from the stock 2600 MHz to 3200 MHz is a big clock jump so we are eager to see what kind of general and gaming performance differences we get to see with that increase. 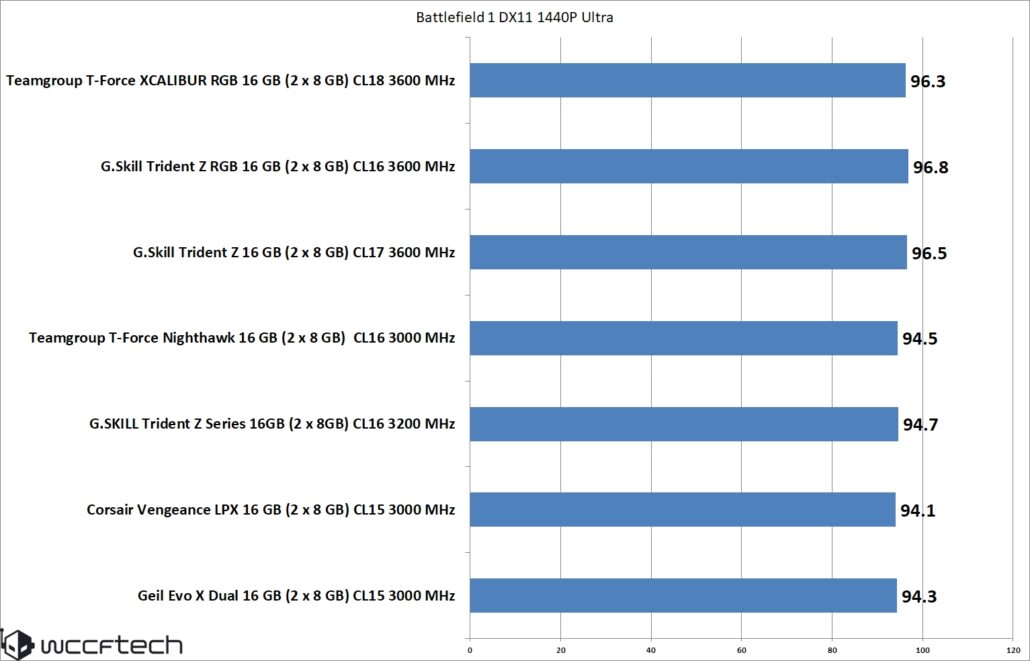 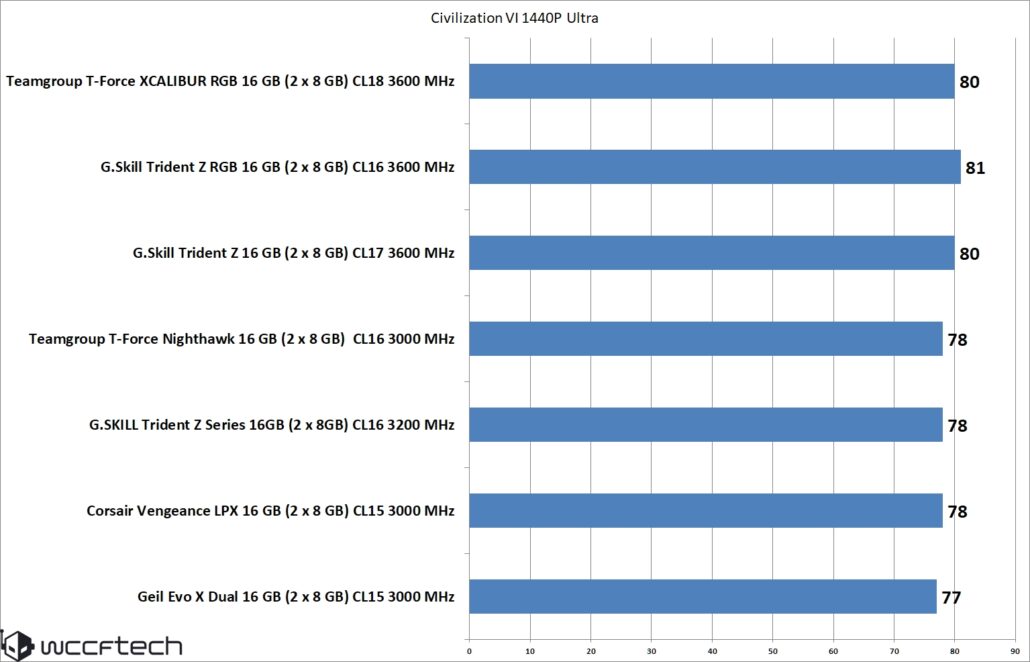 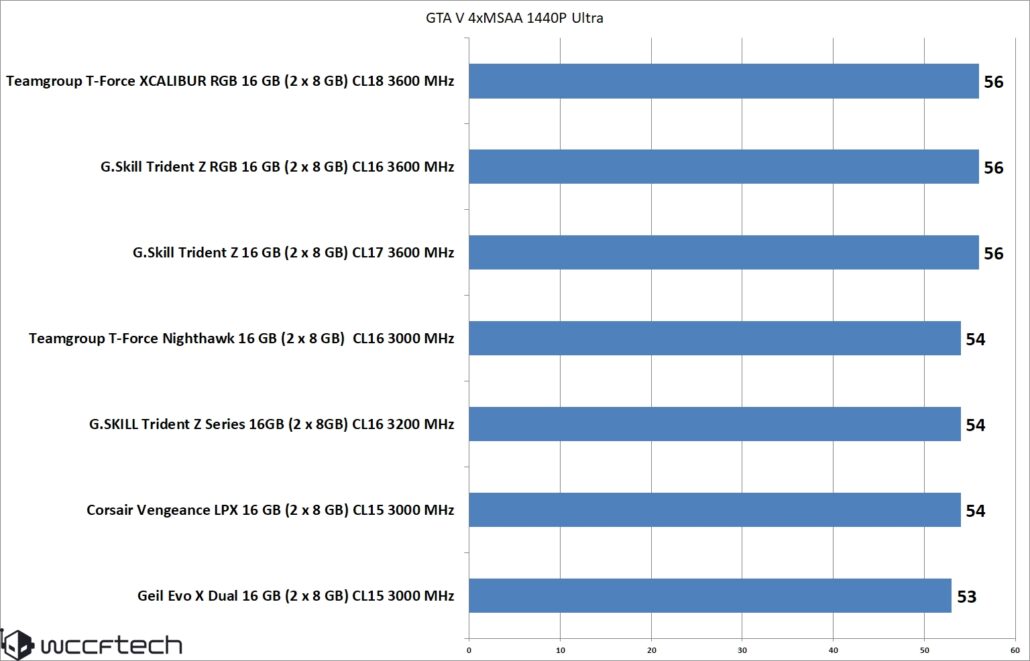 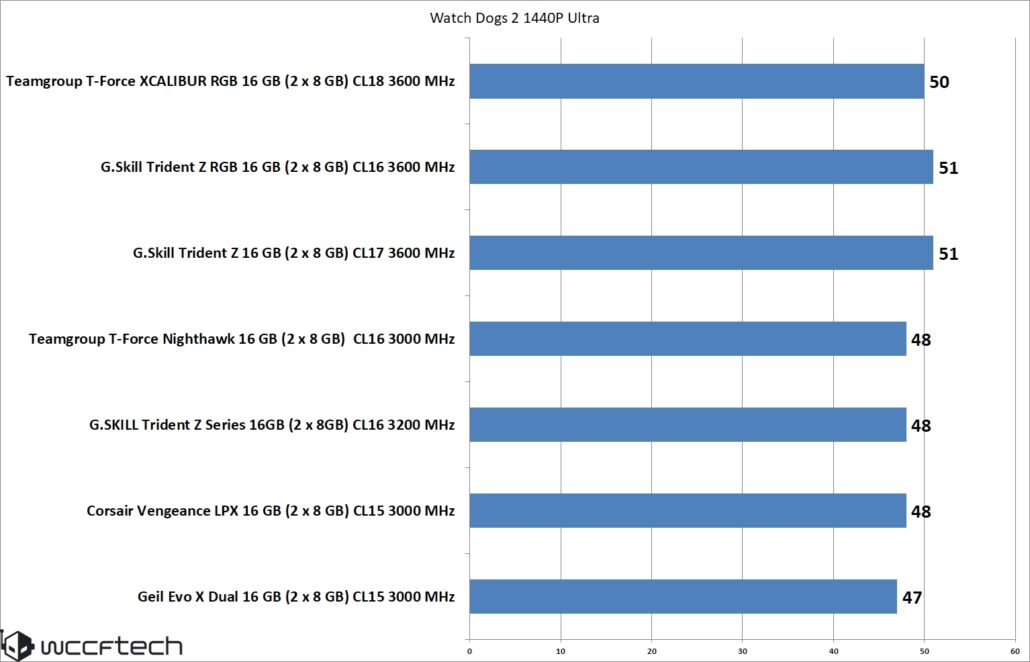 The T-Force XCALIBUR RGB memory is impressive in looks and its also competitively priced against other 3600 MHz memory kits. At $219.99 US (lower in other markets), the T-Force XCALIBUR RGB is not only a great option for gaming systems but it also looks great. So that's a really good start as this kit is compatible with both Intel and AMD based systems considering new Z390 and X470 PCH platforms will allow faster memory support on the latest generation of processors. 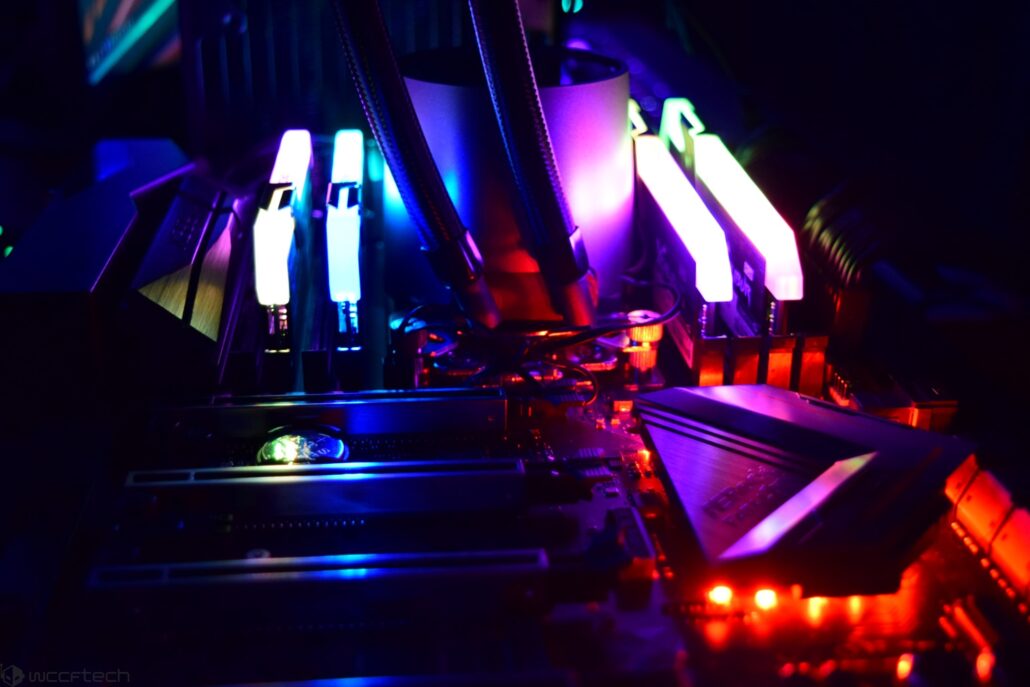 The other plus point for this memory kit is its superb design. It comes with a unique design set that I haven't seen on any other memory kit and it looks very well made. The color scheme is a good match for several desktop systems and the whole built is very solid. The heatsink that covers the PCB is solid aluminum based which means you can stop worrying about high temperatures while the shroud on the top isn't a whole lot tall, allowing you to select from a range of air coolers.

Then comes to the lighting system and T-Force has hopped on board the RGB bandwagon just like every other manufacturer. They do have a specialized software known as Blitz which allows a full array of RGB configuration. The memory is compatible with MSI, ASUS, ASRock, AORUS RGB sync technologies so that covers the addressable LED segment. But those who want their custom RGB setup, T-Force is backing you guys up too. The kit is available in the General (clear LED bar) and Special (Totem Pattern LED Bar), both of which look great and the user can purchase the specific memory kit based on their preference.

The PCB is made up of high-quality Samsung ICs and the DRAM used on the XCALIBUR can squeeze in some extra clocks. Timings side, it begins to show its sensitive side as you can't configure them much but at 3866 MHz, this kit handles all gaming and general workloads with ample speed. 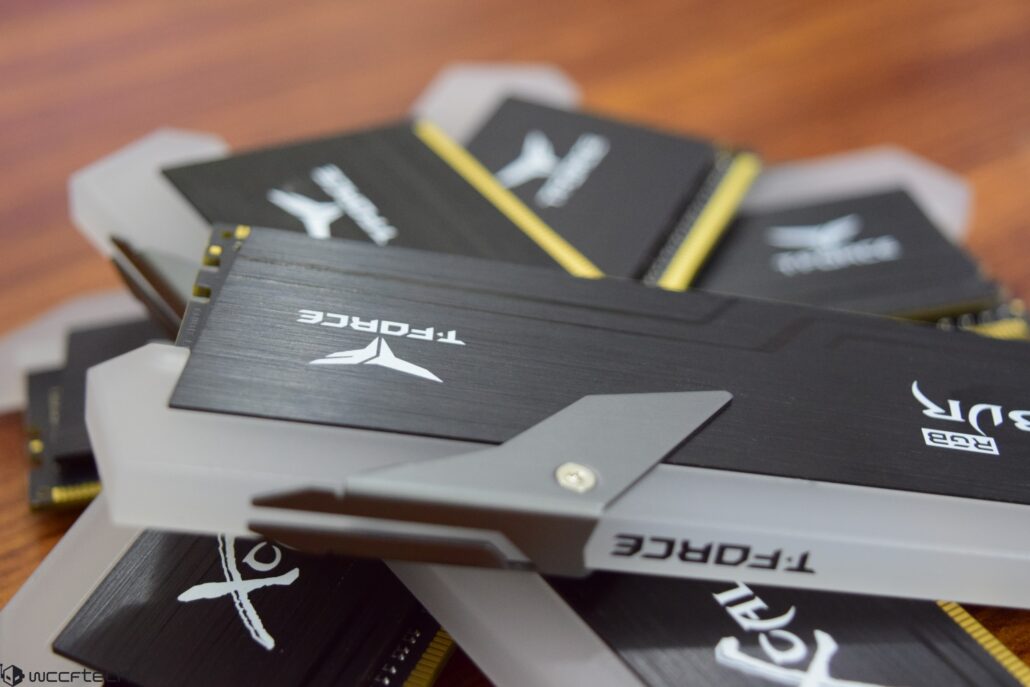 While the price does make the 4000 MHz kits seem more compelling, the 3600 MHz T-Force XCALIBUR RGB memory is a hot and competitive entrant in the DDR4 space right when new processors from Intel and AMD are expected. If you are planning for a new system build, then Teamgroup's RGB XCALIBUR series is definitely a worthy choice for your PC! 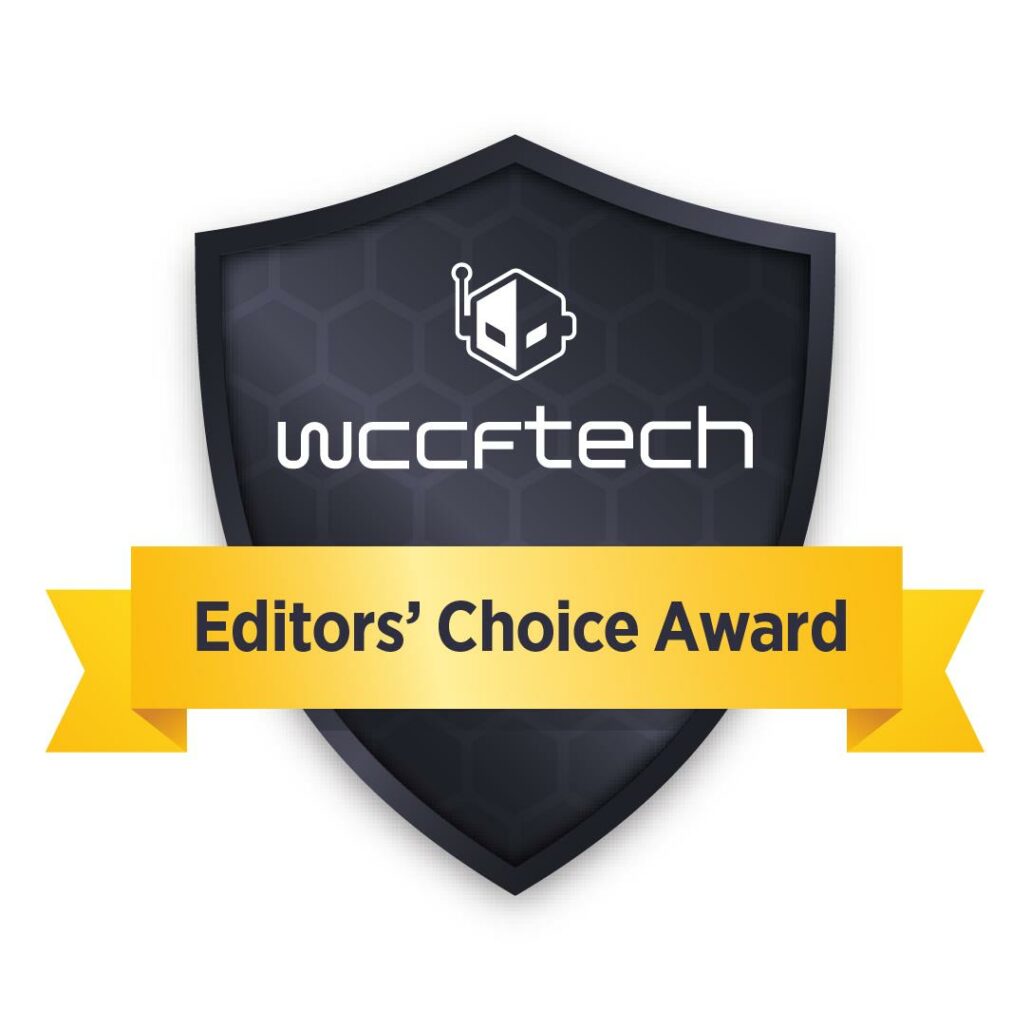 The 3600 MHz T-Force XCALIBUR RGB memory is a hot and competitive entrant in the DDR4 space right when new processors from Intel and AMD are expected. It's a worthy choice for users who are hopping on board to new and powerful mainstream platforms and the $219.99 US doesn't disappoint at all.