Since the arrival of DDR4 memory in the mainstream market, Teamgroup started a separate line of DIMM kits under their new T-Force brand. The T-Force brand is the more enthusiast and gamer aimed memory series with a sheer focus towards quality and performance.

The company later expanded the T-Force brand into their entire gaming portfolio which includes SSDs, gaming peripherals and more.

T-FORCE is TEAM force. The red "T" on the logo of "TF" represents TEAMGROUP's passion for the storage products. The black "F" represents TEAMGROUP's over 18 years of promotion of storage products. The visual design of the perfect combination elegantly symbolizes a pair of flying wings. They represent that the high quality and extreme performance gaming products from TEAMGROUP are capable of allowing all gamers to break the speed limit and enjoy the ever-changing world of gaming.

Today, I will be testing the T-Force Delta R RGB 500 GB SSD storage drive from Teamgroup which comes at a cost of just $45.99 US which seems good for a good looking storage device. How does it fair against other competitive products in this market range? Let’s find out!

Teamgroup's T-Force Delta R RGB SSDs are part of the latest Delta R RGB family and hence, they come with a new design language which fully utilizes RGB lighting to make this the first rainbow themed SSD on the market.

The SSDs are based on the 2.5" SSD form factor and features a 32-layer TLC-based 3D NAND flash (Micron 384Gb) which offers larger capacities, better performance, and slightly lower power input when compared to Teamgroup's previous offerings. Team group is using the mainstream Silicon Motion controller which is labeled as SM2258.

Furthermore, these SSDs are priced slightly above the premium offerings but come are aiming the mainstream market given their rated endurance rate and transfer speeds. What this means is that these products will be great for consumers on the desktop platform who want to show off that LED lighting through the Luminous RGB system implemented within Delta R RGB series.

In terms of performance, the Delta R RGB 500 GB has sequential read speeds of 560 MB/s and write speeds of 500 MB/s which are standard for a 2.5" SSD. The Random read speeds of these drives are up to 90K IOPS and write is 80K IOPS. The SSDs are powered through a SATA connector and have a voltage of 5V (DC).

The endurance of the lineup is rated at 1,000,000 hours which should last a good amount of time with these drives. You are also looking at a 3-year limited warranty through the entire lineup.

The T-Force Delta R RGB SSD comes in a small package. The front of the package is very colorful and comes in shades of red and black. There are many logos on the front starting with the T-Force logo on the top left corner and followed with SSD Gaming, Delta R RGB on the top right corners. The SSD is listed for use with motherboards that have a USB 9-pin header. Teamgroup also has 12V (Delta S RGB) and 5V (Delta RGB) addressable RGB SSD variants available in 250 GB, 500 GB and 1 TB variants. The drive we are testing today is the 500 GB variant. 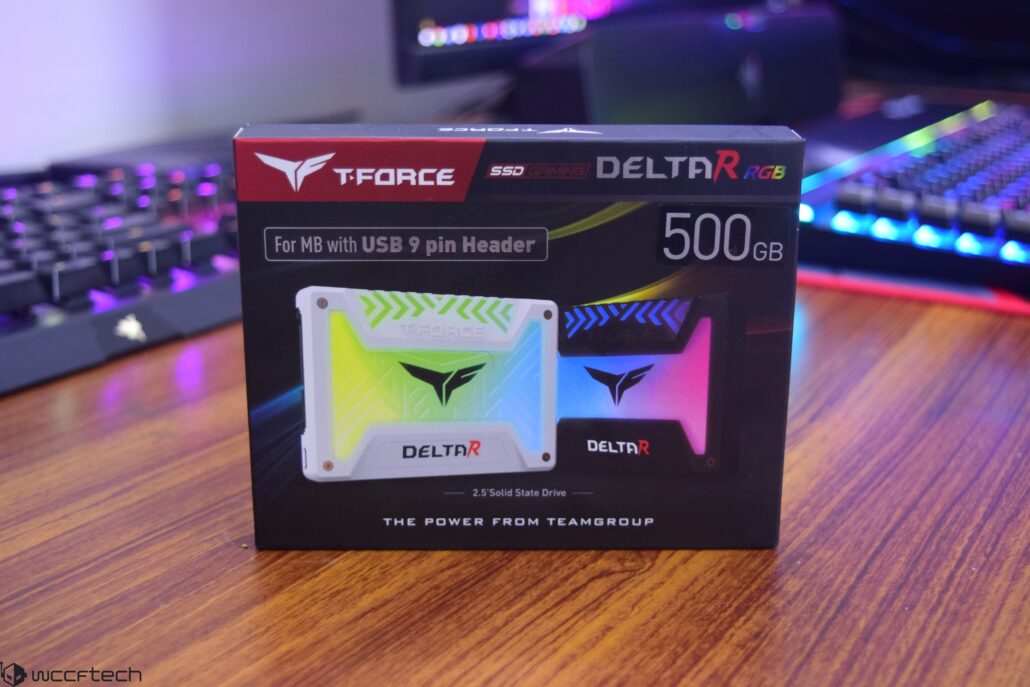 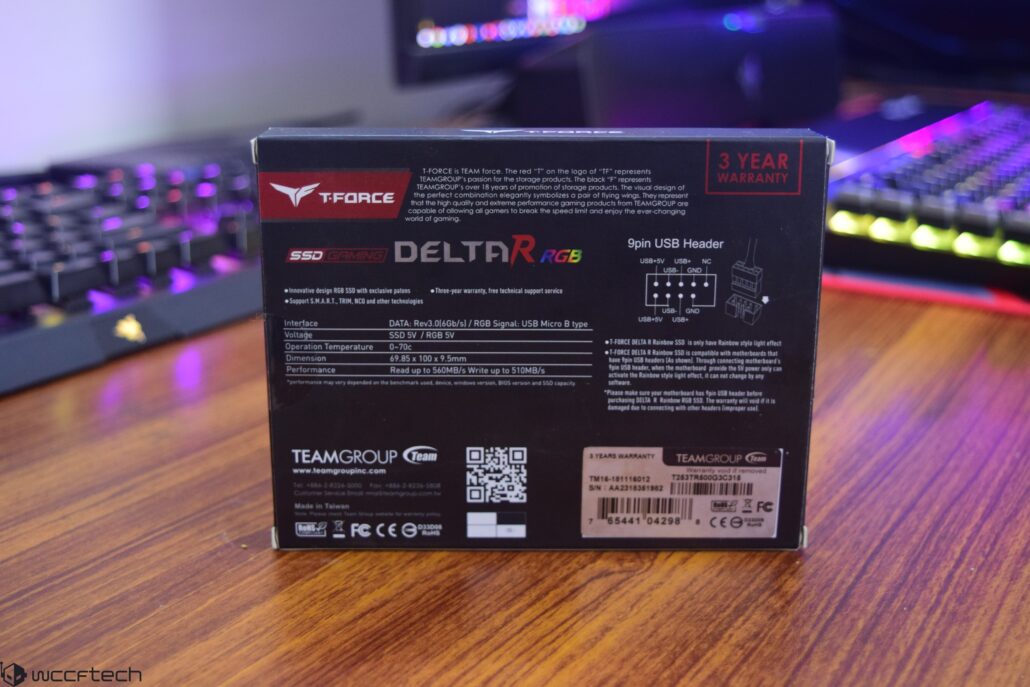 The package includes three items, one is the warranty booklet, the USB power cable and the other is the drive itself. There's also a T-Force case sticker inside the package which is a nice addition. 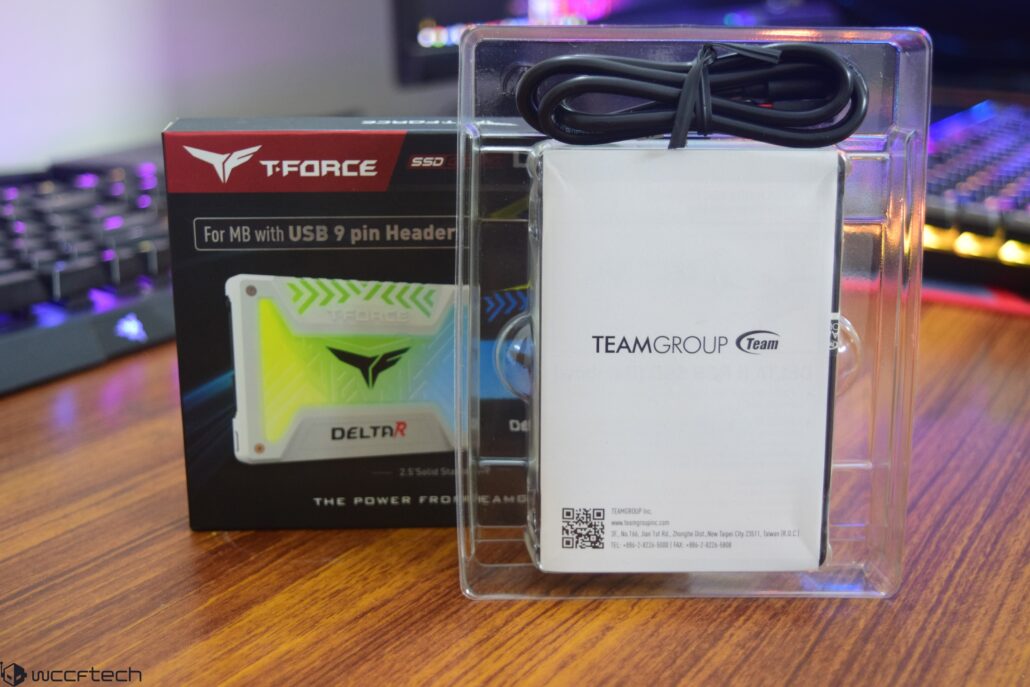 Out of the package, the T-Force Delta R RGB SSD I received comes in black color. Do note that all variants are available in either white or black colors and both look great, offering a very premium look and build quality. 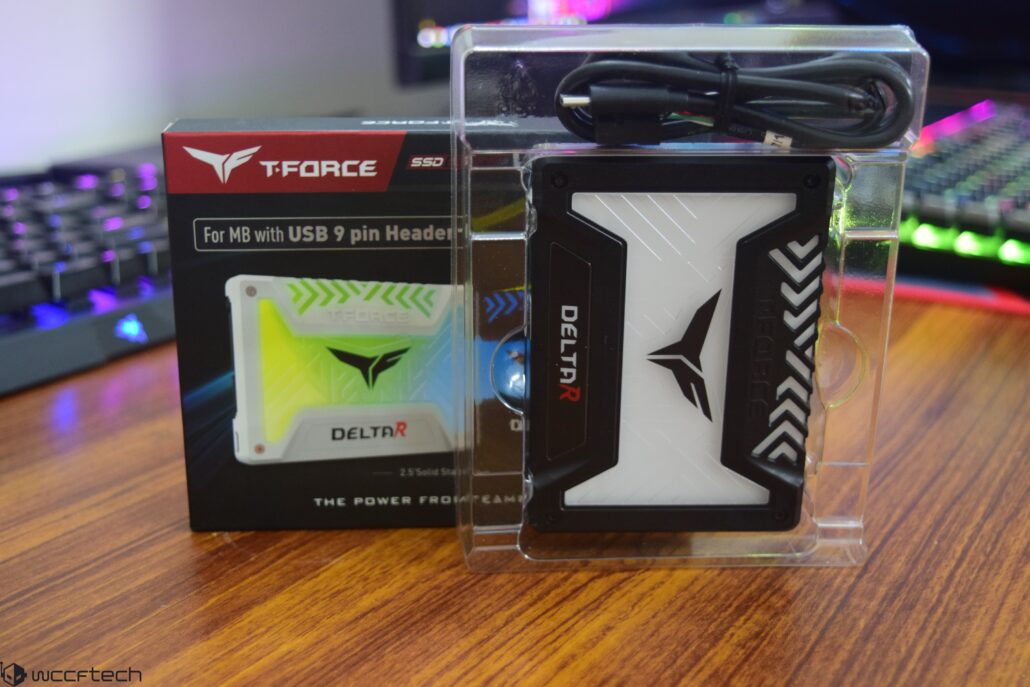 The front of the T-Force Delta R RGB SSD bears the Delta R and T-Force logo. The design of the SSD is very rugged and you can tell that this 2.5" drive may not be suited for laptops with thin designs. Laptops would also take away the RGB which this SSD is all about. Regardless, the design is very nice and unique. 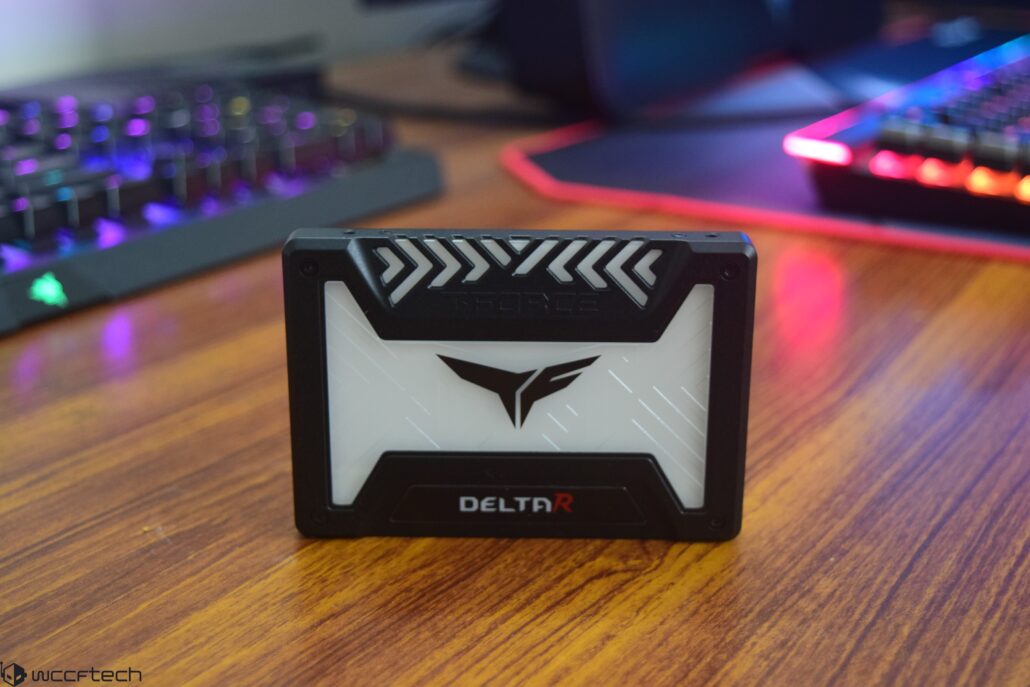 On the back. we can see some marketing labels and barcodes along with the SATA and power connector interfaces. 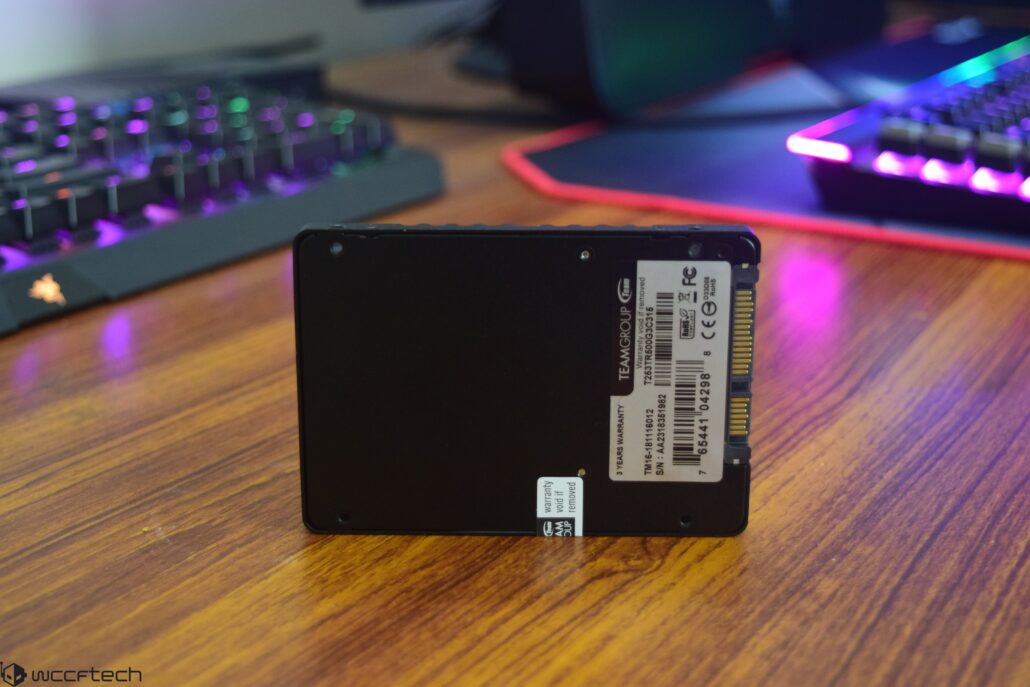 The internals of the drive is composed of a single RGB strip that illuminates the entire front frame through a reflective surface. The other side of the metal frame holds the SSD PCB itself which has a single NAND Flash, NANYA NT5CC128M16IP-DI acts like a 2 GB DDR3 DRAM cache while the SM2258G controller from Silicon Motion can also be seen here. The data rate of the DRAM cache is rated at 1600Mbps.

Our test platform for this review consisted of an Intel Core i9-9900K  processor which ran at stock clocks on the AORUS Z390 Master motherboard. The platform was coupled with 32 GB of DDR4 memory from G.Skill (Trident Z RGB / 8 GB x 4) and the ASUS ROG Thor 1200W PSU. For graphics, I used the MSI GeForce RTX 2080 Ti Gaming X Trio. This rounds up as a high-end platform for tests with modern day SSDs.

As you can note from our list above, the T-Force Delta R RGB 500 GB drive was compared against six different 512 / 500 GB SSD. I also used the Samsung 960 Pro, Samsung 960 EVO, Samsung 860 EVO and the ADATA XPG SX8000 drive for comparison purposes. You can check out the benchmarks in the next segment.

First up, we have the official performance stats for these drives as listed by their manufacturers. The T-Force Delta R RGB 500 GB SSD is rated at 500 MB/s Sequential Write and 560 MB/s Sequential Read speeds while the Random 4KB IOPS are rated at 80,000 (Write) and 90,000 (Read). You can compare these stats with the rest of the drives I tested in the following chart: 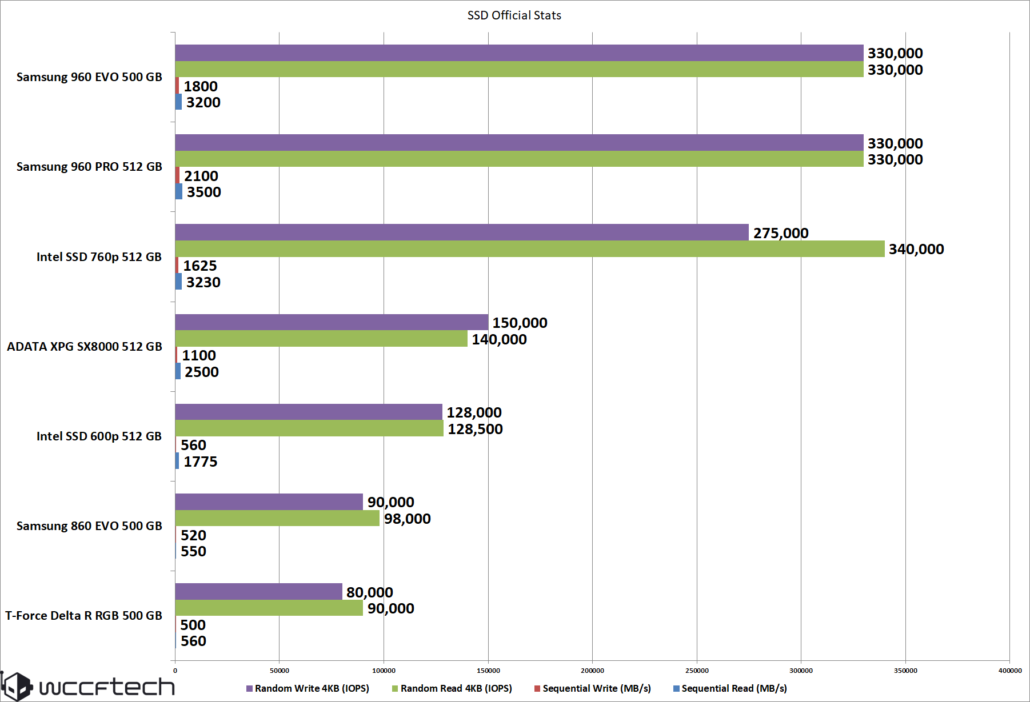 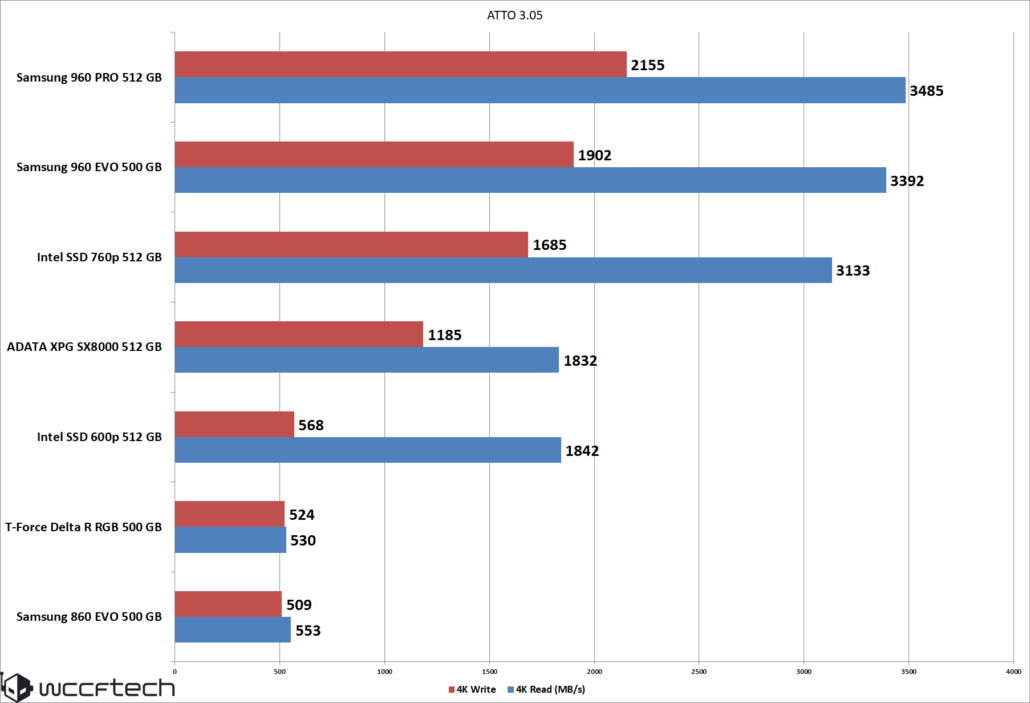 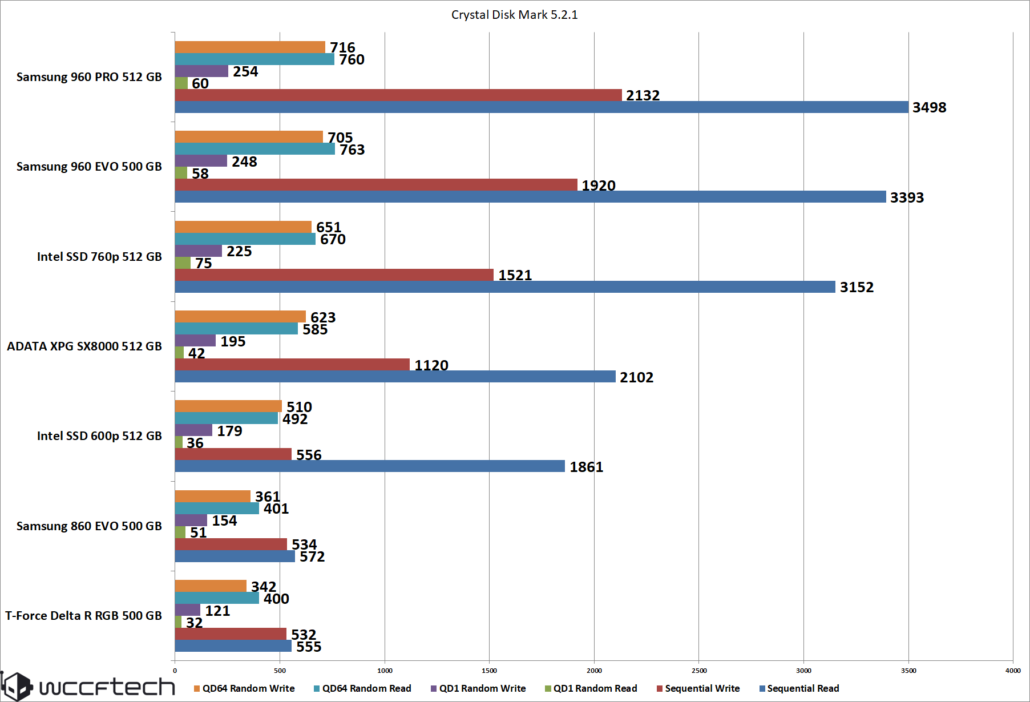 To test the maximum average transfer speeds of the drives, I used a 25 GB file to test the limits. 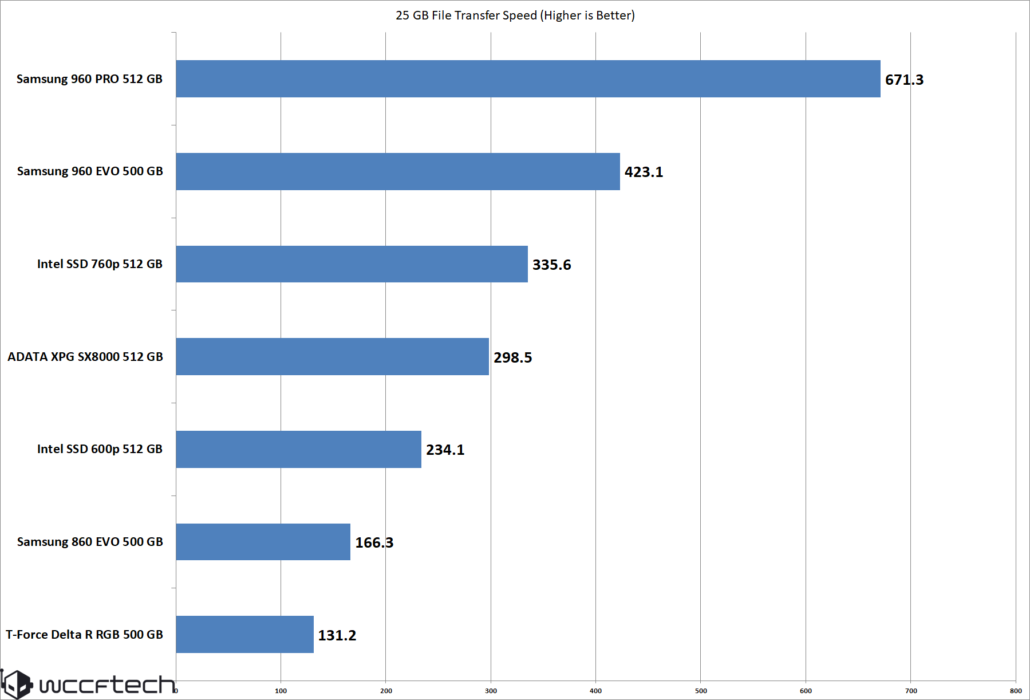 The PCMark 8 Storage benchmark is designed to test the performance of SSDs, HDDs and hybrid drives with traces recorded from Adobe Creative Suite, Microsoft Office and a selection of popular games. You can test the system drive or any other recognized storage device, including local external drives. Unlike synthetic storage tests, the PCMark 8 Storage benchmark highlights real-world performance differences between storage devices. 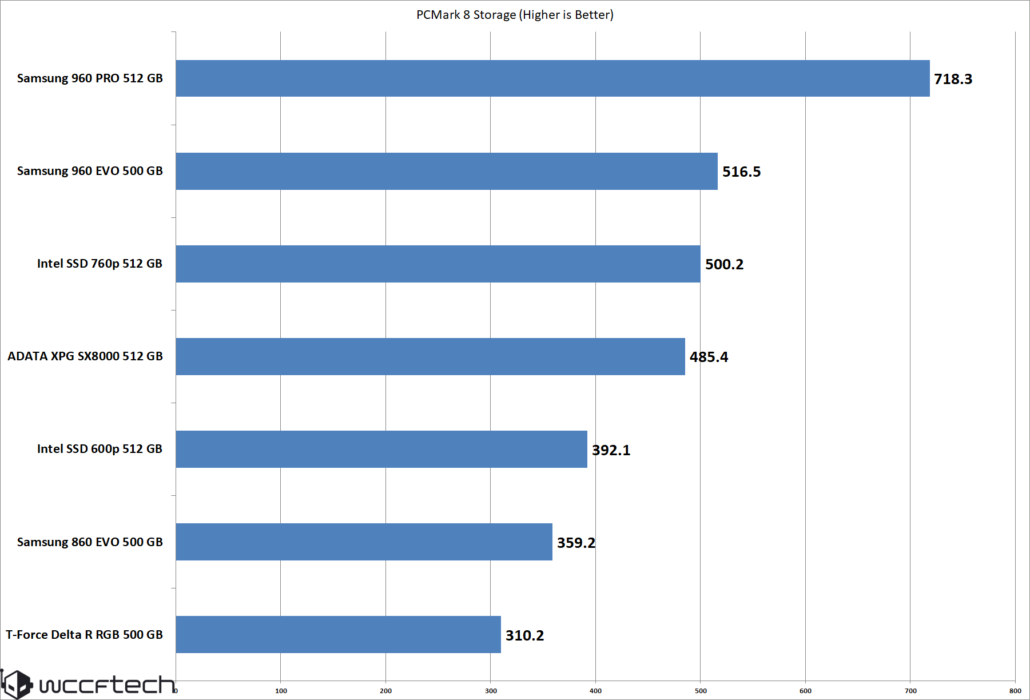 Aesthetics over performance, this is what the T-Force Delta R RGB SSD is all about. While it's weird to be talking about looks of a storage device over its performance, it has to be said that the Delta R RGB SSD series has some of the best looks in the SSD department with its RGB capabilities. With a stunning front panel that lits up like a Christmas tree, it's definitely an eye catcher for gamers and enthusiasts who are looking ways to add more bling to their PC. It can be seen that the drive has a target market in the mainstream market but does the price and performance reflect that, well let's talk about that, shall we.

Compared to the Samsung 860 EVO 500 GB which currently retails at around $80 US while the Delta R RGB SSD 500 GB retails for around $45 US which is lower than the Delta RGB variant that comes with addressable RGB LEDs (5V). Comparing the price to performance, we can see that for slightly more, the Samsung SSD 860 EVO offers better performance but the Delta R RGB SSD is able to hold on its own. An upgrade with this drive over an HDD would be absolutely worth it but so is the case if you buy even a cheaper SSD. 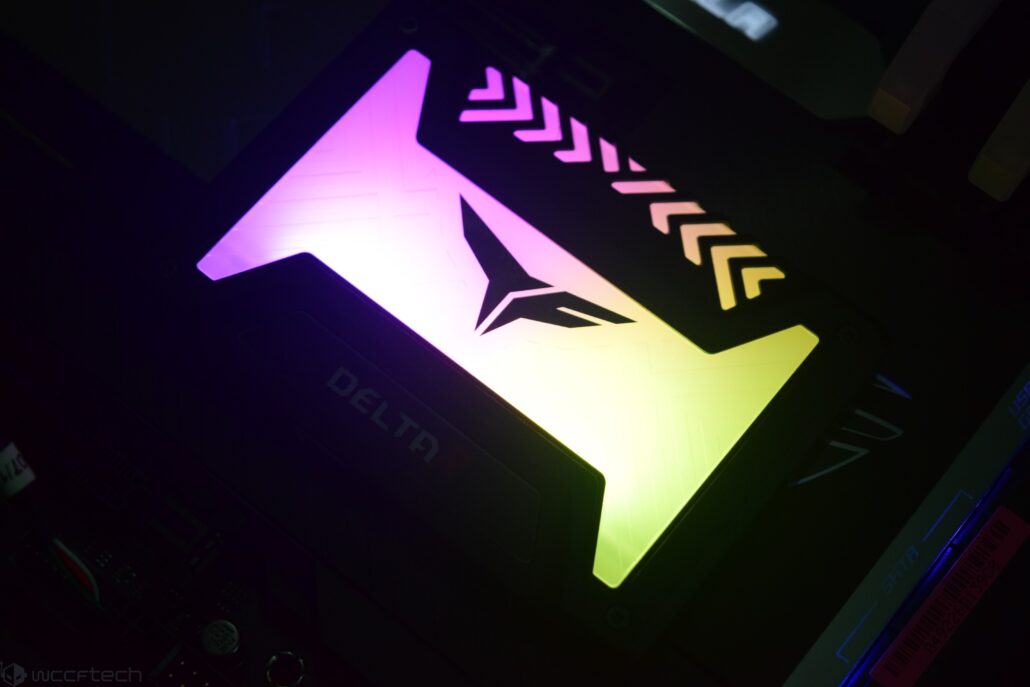 The other thing about the SSD is that it offers a 3-year warranty which is lower compared to the 5-year warranties that some other manufacturers offer and the average endurance rate does make it a bit let down but I sure hope Teamgroup has a new variant coming soon that offers great looks while remaining competitive to another premium SSDs. Overall, I consider the T-Force Delta R RGB SSD to be a stunning looking product that would go well with all modern PC builds, especially if you are looking to add more RGB and even though the performance isn't the strong points of this SSD, it gets the job done as you should expect from an SSD without costing a major premium over the non-RGB standard SSDs. 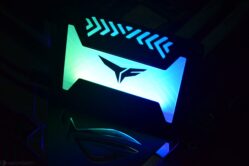 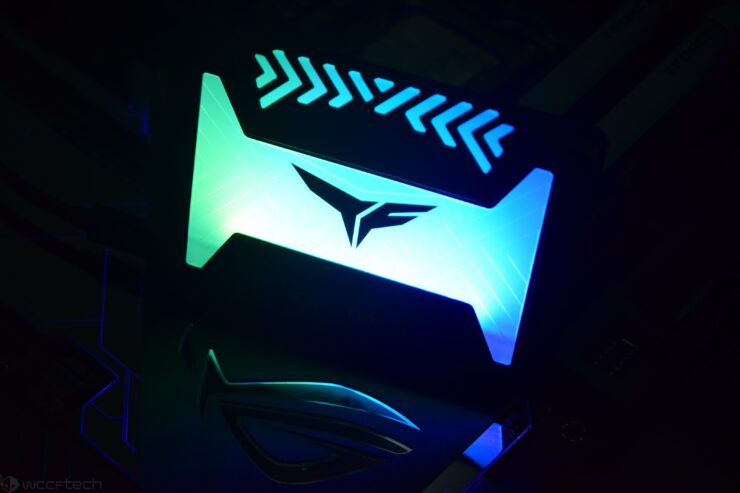 I consider the T-Force Delta R RGB SSD to be a stunning looking product that would go well with all modern PC builds, especially if you are looking to add more RGB and good (not great) SSD performance inside your build at a decent price.